The recent approval of LNG Canada's liquefied natural gas export project in Kitimat has been accompanied by calculations that British Columbia domestic energy consumption will have to undergo radical changes to offset the emissions created by the combustion of B.C. natural gas in new markets. Essentially, this means decarbonizing the local economy to the greatest extent possible.

Although there is a compelling argument that this is not an effective direction to achieve climate gains, it's important to understand what the economic and societal implications would be of moving toward a "100% renewables" strategy, which implies using electricity instead of hydrocarbon fuels. In this article, I'm going to draw on some recent work by academics to get a better sense of what such a strategy could mean in practice.

The following slide makes clear that this is the direction the British Columbia government wants to go; it was included in the technical briefing at the Oct. 2, 2018 announcement of LNG Canada's final investment decision: 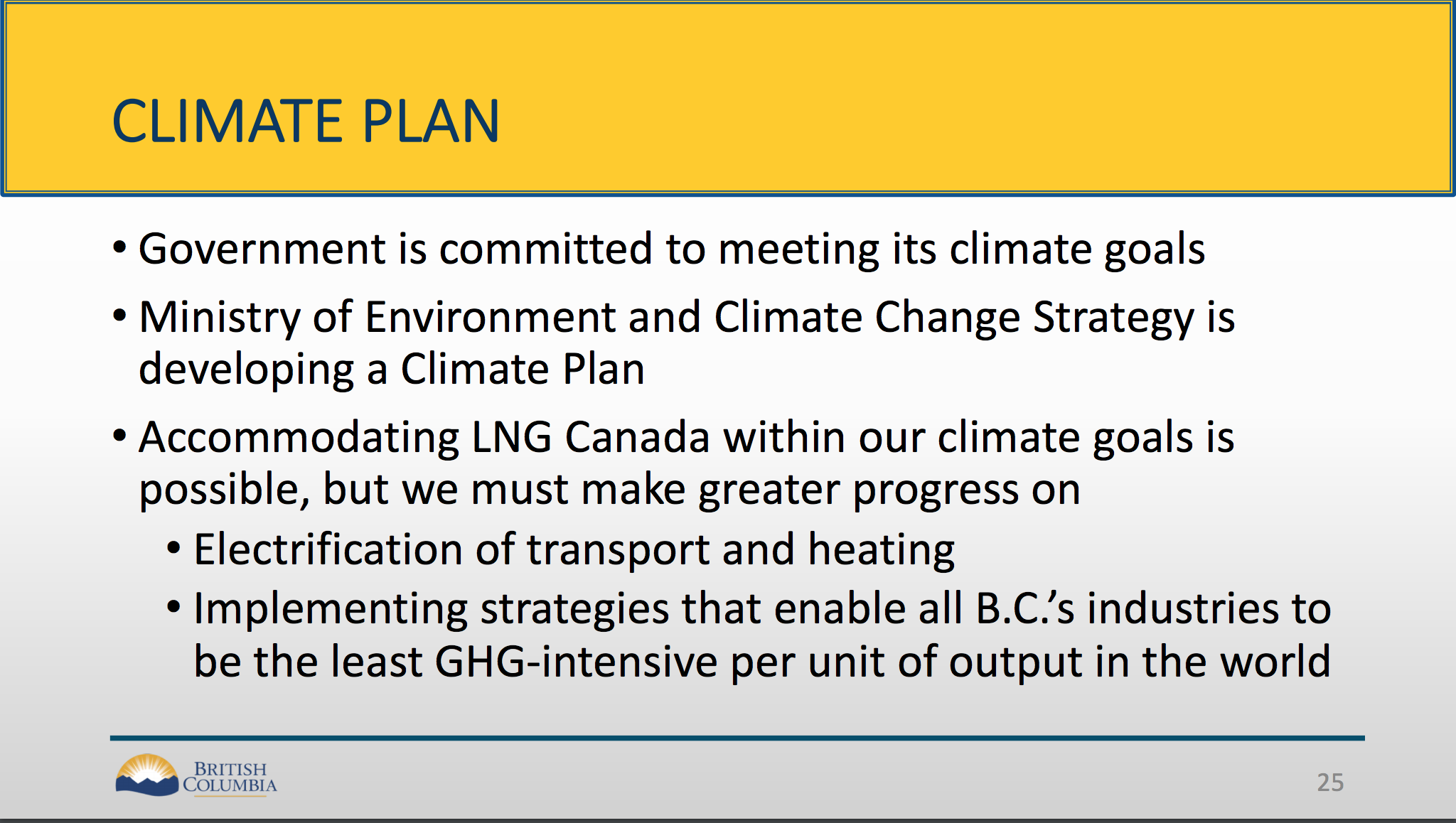 It's not the first time that electrification of heating and transportation has been talked about. Consider this scenario, applying to the City of Vancouver, laid out by a group of researchers from Simon Fraser University in a March 2017 paper:

For residential buildings in this scenario, we assume that fossil fuel burning hot water heaters and furnaces are not permitted under Vancouver’s building code after 2030 for new buildings as well as for replacement equipment in existing buildings. Thus, all residential heating installations must use electric powered heat pumps, solar hot water, electric-thermal heat, or other zero-emissions heating sources. Existing single-family residential buildings are required to use renewable natural gas (RNG), which is methane produced from biological sources, in any new gas-fired furnaces installed after 2030. Thus, after 2030 in our 100RE scenario there is policy moving both existing and new buildings to zero emissions heating equipment.

We further assume that new or existing institutional, light industrial, and commercial buildings cannot install new fossil fuel burning heating, ventilation and air conditioning (HVAC) systems after 2030, although they can continue to use natural gas for non-HVAC uses. For example, cogeneration, cooking, and other processes may use natural gas; however, businesses continuing to burn gas must demonstrate an increasing percentage of RNG through to 2050, at which time all commercial gas use must be RNG.

In transportation, we focused on Vancouver implementing policies that reduce fossil fuel use in vehicles. Specifically, we assume that the City applies a policy that slowly reduces available parking spaces for gasoline and diesel burning vehicles in city-owned parking lots, on streets, and in new multi-unit buildings. For 100% gasoline and diesel vehicles, restrictions on available parking stalls begin in 2025 and by 2040 there are no longer any city-controlled parking spaces available. For hybrid vehicles, the parking space reduction begins in 2035 and by 2050 there are no city-controlled spaces remaining. This reduction in spaces for GHG polluting vehicles slowly increases the intangible cost of operating a gasoline or diesel vehicle within Vancouver, while decreasing the intangible cost of operating an electric or biofuel vehicle.

The fuel use of freight vehicles is difficult to regulate without senior government support. We nonetheless assume that the City requires businesses operating within Vancouver to demonstrate the exclusive use of renewably powered vehicles to qualify for a business license after 2030. Available freight options include electric vehicles and hybrid electric/biofuel powered light trucks, and renewable diesel powered heavy or light freight trucks, and hydrogen-powered heavy trucks. Vancouver businesses cannot use natural gas trucks in the city after 2030 in this scenario. Electric trucks using overhead wires are also an option on major truck routes such as Clark Drive; however, these are not included in the technological options that we modeled.

That paper was later summarized in a 2017 submission by UBC's Water Governance program to the Site C hydro project certification process. The bottom right cell in the table below shows additional electricity required in a 100% renewable-powered Vancouver.

It's an astonishing figure when you stop to think about it. Almost double what we use today. A more than 90 per cent increase in electricity demand would not just call upon homeowners and businesses to review their current fuel sources; it would require monumental investments in new electricity infrastructure. Last year, I attended a utility conference near Portland, Oregon where I learned that if Washington State was to go 100% renewable, using solar and wind, the pricetag of all the new infrastructure required would be about $60 billion US, and I'm not even sure that included changes to the electricity distribution system. If such a study has been done for British Columbia, I'm not aware of it. So, to get the conversation started, I'm devoting this post to doing the best I can to estimate the potential scale of a 100% renewable transition for British Columbia.

The chart below lists all sources of electricity generation in British Columbia, whether owned publicly or privately (thank you, Wikipedia). Most B.C. power is already zero-carbon because it is created by hydro dams. Let's suppose that British Columbia's electricity requirements would, like Vancouver's, rise by 90 per cent if transportation and heating were totally electrified. Maybe it would be more, since rural industrial facilities like mines and pulp and paper mills are voracious electricity consumers.

The dotted line in the chart encompasses that generation capacity that would create a 90 per cent duplication. In short, all of the major hydro dams built in the 20th century would need to be cloned, but that would only be the start. The 54 largest generation stations would have to be replicated to get to 100% renewable. But some of those 54 are natural gas powered, and they would have to eliminated so we are talking about a much greater number of renewable installations.

Some might say: forget about dams, you just need to get some wind turbines and solar panels. I'm afraid it's not so simple. A couple of years ago when the City of Vancouver considered phasing out natural gas, I calculated that to replace all of those hydrocarbon joules with electricity would require building a wind farm three times the size of the world's largest existing wind farm. That did not even consider the question of backup for times when the wind was not blowing.

Not to be a party pooper, I'm also uneasy about widespread solar adoption, not just because of the battery storage problem. Storage is going to get solved in due course. But even once it is, somebody is sooner or later going to have to explain what a solar-panel-dependent world does for energy when there is a Krakatoa-scale volcanic eruption that drastically reduces global sunlight for more than a few days, as inevitably that day will come.

I've heard the "100% renewable" goal defended as an aspirational phrase, which is to say an effort by information elites to inspire virtuous behaviour in others. At some point, policies need to get made and I think we should be very concerned if we are doing so based on goals that have not even begun to be understood. Labelling participants in this conversation as "pro-climate" or "anti-climate" is a ridiculous practice that hampers the kind of open dialogue that will be required to solve the monumental energy challenges we are facing.

One final point. The missing piece in this is how we make it possible for Canada to receive the climate credit it should receive for serving markets like China with the lower-carbon fuels those economies desperately need. The latest IPCC climate underscores the urgency of this problem. Singling out British Columbia for a draconian shift in its energy system, as its compensation for aiding China's move toward a greener energy system, is not a very logical approach. BC should rewarded, not punished, for getting its LNG to Asia.