According to new figures released by Natural Resources Canada, BC ranks in the middle in terms of both the number of people employed in the sector and its contribution to provincial GDP

About five percent of working Canadians are employed directly in natural-resource industries (900,000), and another five percent work in jobs that support the resource sector (another 900,000). Added together, this is about 10 percent of the roughly 18 million Canadians in the workforce. 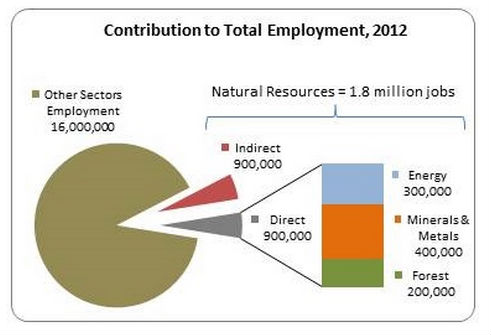 At the provincial level, however, the study only counts those people who are directly employed in the resource sector and not those in other industries who support them. Still, it’s worth a look.

Compared to other provinces, BC ranks in the middle in terms of both the number of people employed in natural resources and the sector’s contribution to provincial GDP. 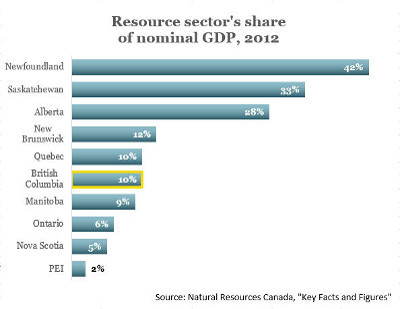 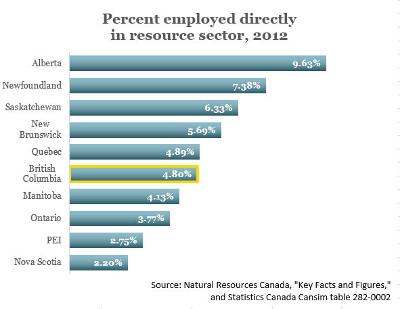 Big things on the horizon

For some, these numbers may look a bit small. When you see numbers showing that the resource sector accounts for 10 percent of BC’s GDP and about five percent of employment, it’s reasonable to ask, is that all? The answer is: No, there’s more.

First off, these numbers only indicate what’s taking place in the resource sector itself, not the impact the sector has on the rest of the economy. And we have good reason to think this unreported impact is huge. For instance, according to BC Stats, 78 percent of BC’s commodity exports are natural-resource products. Also, in a recent study for Resource Works, economist Philip Cross found that one extra dollar’s output from BC’s resource sector is expected to produce an extra $1.74 in the province’s total GDP.

Secondly, these numbers are from 2012, a year of low prices for resource commodities and a hurting forestry sector. But times are changing. A turnaround in forestry is expected as the demand for housing picks up in the US, and major investments are being made to develop BC’s LNG sector. Industry is seriously worried about creating more jobs than BC can handle.

You can see just how significant these trends are when you look at the size of ongoing and planned major projects in the BC resource sector. When taking into account normal amounts of capital spending in each province, BC has the second-highest level of incoming projects in the country, after Newfoundland. (To put these big numbers in perspective, I’m showing them as a percentage of the total spending on things like machinery, equipment and buildings in each province in 2012). 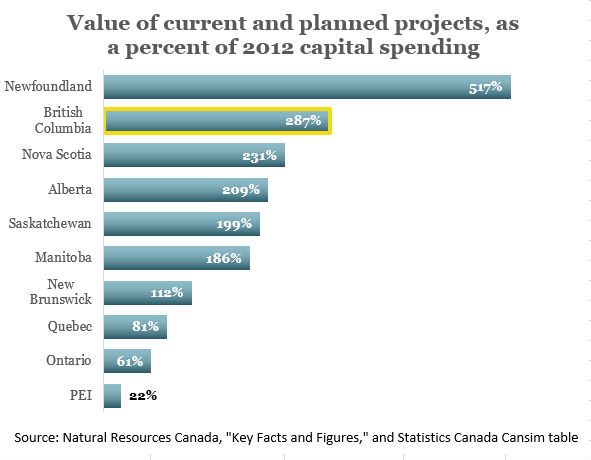 Yes, BC relies on natural resources, but we’re not Alberta

Overall, these numbers suggest the natural resource sector is currently a crucial part of BC’s economy, and signs point to it becoming much bigger soon. But the resource sector does not dominate our economy to the extent it does in Alberta, Saskatchewan or Newfoundland - at least not yet.

Peter Severinson is the Research Director for Resource Works.