The country's oil industry has released its 2014 forecasts for the next 16 years up to 2030. Here are its findings

Whatever the challenges the Canadian petroleum industry may be encountering in gaining pipeline approvals, one thing is clear: current production levels (mostly in the Alberta oil sands) are on the upswing. This slide shows Canadian production from all sources. It is evident that today’s oil sands operations are, overall, going to start declining starting in about four years as they need to continually reinvest in production capacity like other sources of oil. Looking to the other side of the country, it’s also clear that oil from eastern Canada is also going into decline, which means that markets like Quebec and the U.S. east coast, which get some of their oil from Atlantic Canada, will be looking for alternative sources. This infographic summarizes pretty neatly why there is a desire in the oil industry to add new production capacity. 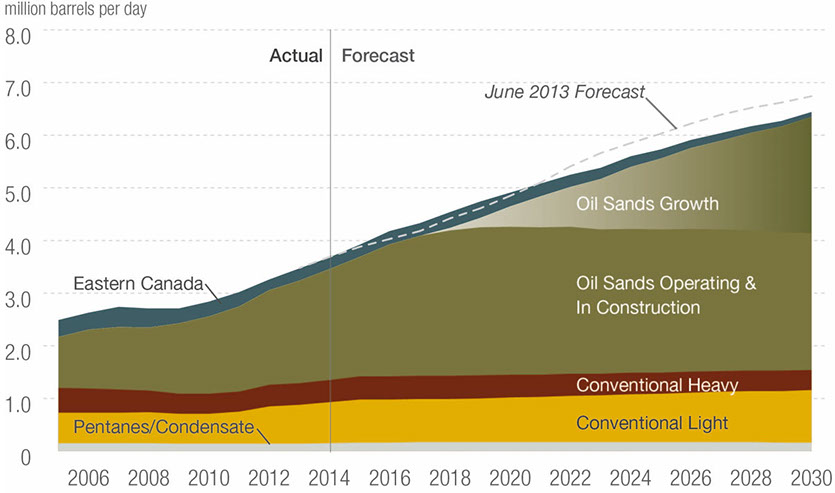 Conventional oil (the kind that flows through a well or pipeline without processing or dilution) is far from dead. We just don’t hear much about it. This infographic is a forecast for western Canada’s conventional supply. Just one year ago the outlook for 2030 was essentially flat. Now we see a much different picture, with a significant rise in overall production by the end of the next decade. Saskatchewan accounts for some of the growth but most is in Alberta. Given recent headlines about new capacity that is being shelved, this may come as a surprise. 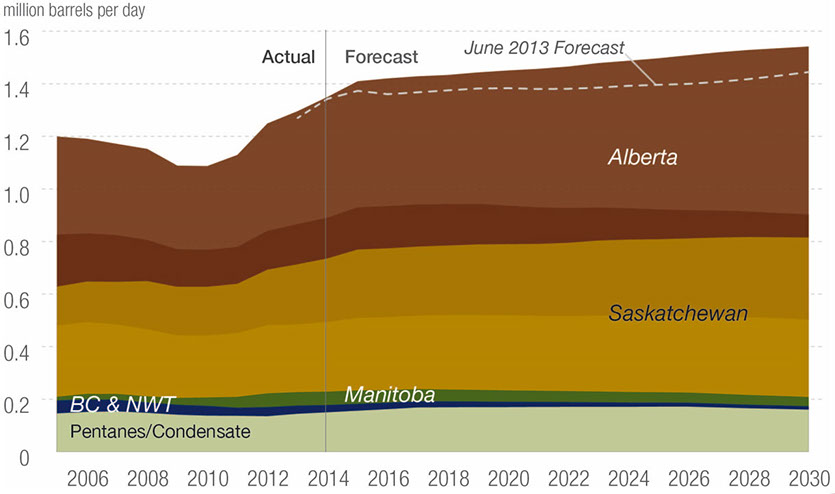 3. Those big dirty oil sands pits that Desmond Tutu hates were already becoming a thing of the past

When Desmond Tutu visited the Alberta oil sands recently, the South African cleric decried what he called the “filth” – evidently a reference to those immense holes in the ground necessitated by the oil sands extraction process known as mining. However, going by this infographic, it looks like the Canadian oil industry got that message long ago. In fact, mining is falling out of fashion as the way to extract oil sands. The process known as “in situ” is already surpassing mining. In situ means drilling holes into the ground and getting the oil out using steam.  From the air, in situ would remind most people far more of old-fashioned oil wells than the images of mines usually paired with descriptions of oil sands. Mining will still be there for Tutu to rail against, but its expansion is comparatively minuscule while the new method sees explosive growth. 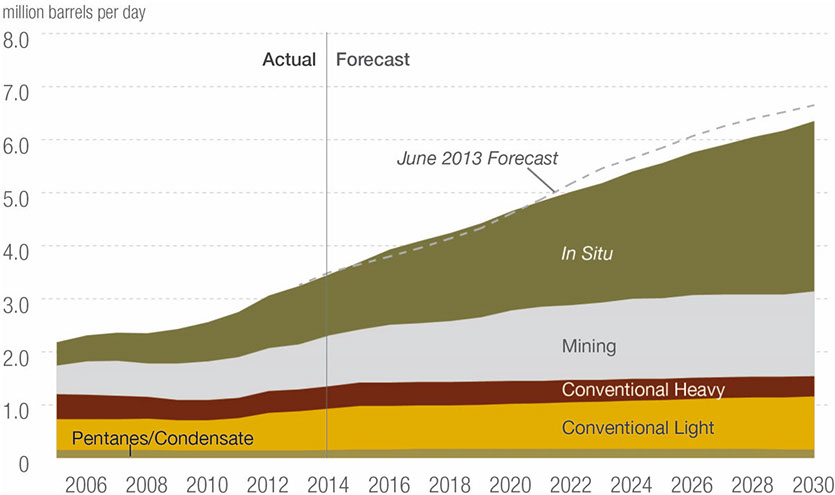 4. The growth forecast for Canadian oil sands just got smaller

This infographic shows western Canadian oil production. From last year to this year, there has been a significant decline in forecast 2030 growth – about half a million barrels less in fact (or in humanspeak, enough to power all the vehicles in the United States for two hours).  http://www.businessinsider.com/1-million-barrels-of-oil-2010-6?op=1 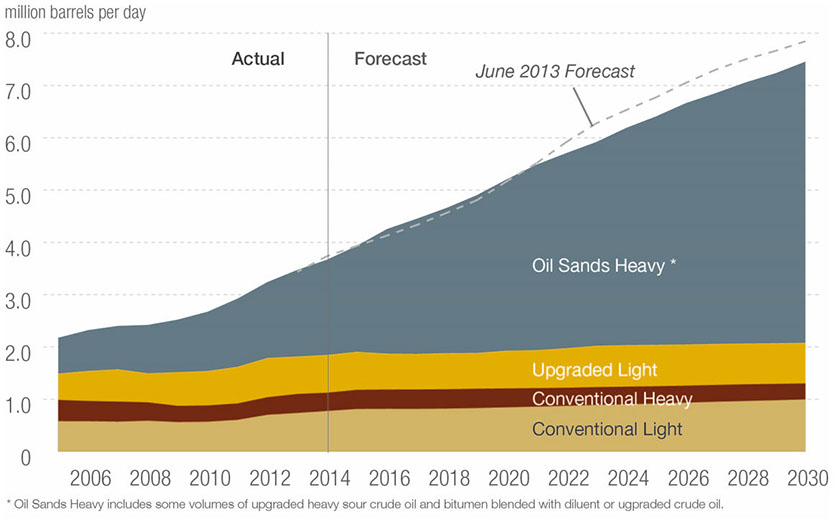 This infographic shows U.S. and Canadian refinery demand according to where the oil comes from. The red is western Canadian oil, and yellow is from eastern Canada. Quebec gets its oil from overseas (mostly Algeria at the moment), which may help to explain why there is a major move afoot to ship Alberta oil eastward.

6. We Hear Only About Canadian Pipeline Proposals, But In Fact Many Pipelines Are Being Built In North America

Here is a useful reality check for those afflicted by NIBINIMBYism (Not Interested Because It's Not In My Backyard – not sure if that one is going to catch on). There is a lot going on in North American pipeline development and not just with a handful of headline-grabbing projects. The continent’s energy commodities are growing, not shrinking (even as there is a growing long-term trend toward post-carbon energy sources). 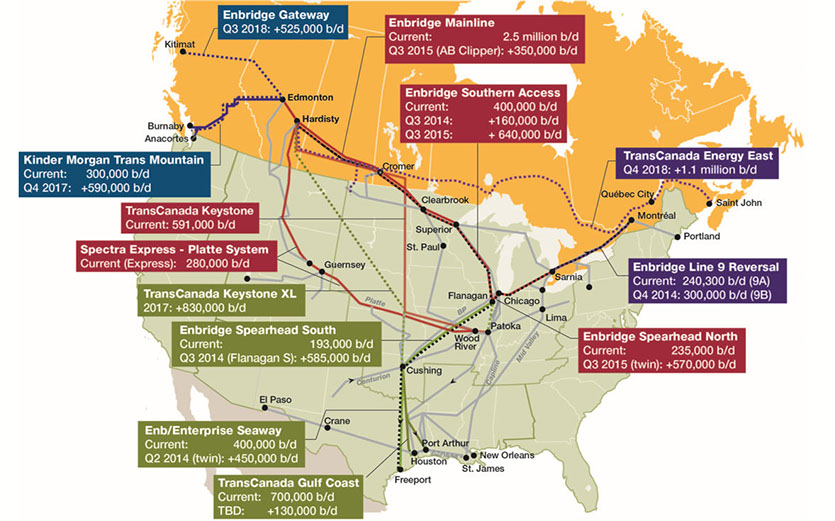 7. Without New Oil Pipelines, It's Very Hard to See How Canadian Oil Will Get to Market

We are hearing a lot about the growth of rail as a way for Canadian oil to get to market while new pipelines get built. According to this infographic, rail is definitely on the upswing. But it is no panacea. Future pipelines shown here dwarf the impact of rail. What’s also interesting is that the new Energy East pipeline to Saint John, New Brunswick is as big as the combined size of the Northern Gateway and Kinder Morgan proposals for the west coast of Canada. There is an old rule in the petroleum industry dating back to the beginning of the modern oil industry and it is that oil will always get to market. The red line is the amount of oil being produced in western Canada and the big new United States source from the Bakken shale that we commonly associate with North Dakota. These pipeline projects have a huge economic footprint. When IHS/CERA studied just the Kinder Morgan, Northern Gateway and Keystone XL pipeline projects, it was found that they would unlock more than $1.3 trillion in economic output for Canada and $281 billion in tax revenue over a 25-year period. 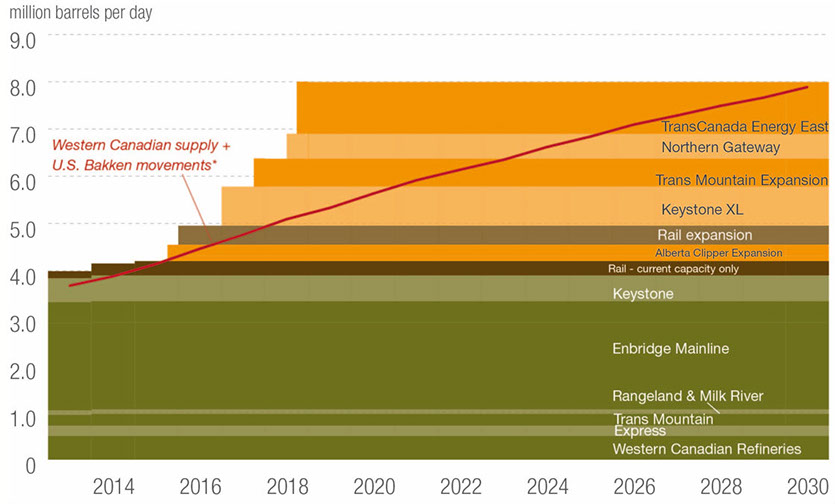 8. Yes We Are On Track To Eliminate Fossil Fuels - But It May Come As A Surprise To See How Long It Will Take

Here is one scenario showing what has to happen for current usage of fossil fuels to be replaced by alternative energy sources. Solar has to grow by 12 per cent a year and wind by 8 per cent. We will also need much more geothermal and biomass, as well as a healthy dose of nuclear and hydro. Alternatively, we could try to do without power altogether - not a situation that anyone is likely to be contemplating. According to one source, we may be on track with solar, which increased 35 per cent globally in 2013. Wind has also had a good run recently with annual growth rates of 16 per cent. Assuming that over the longer term growth rates would be lower overall, this infographic (source: BP) suggests it will take until well into the 2050s for non-fossil-fuel energy to be the majority. 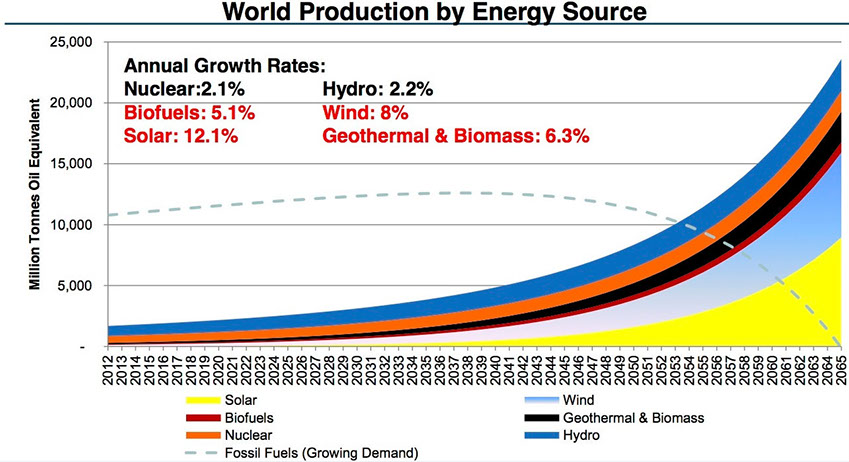 Source: Infographics 1-7 are from the Canadian Association of Petroleum Producers. Infographic 8 is based on data from BP.