It's 'glory days' for heavy wood timber in British Columbia

When Structurlam president Bill Downing talks about wood and the expanding role he sees for it in commercial and institutional  buildings, he can be forgiven for using superlatives

“These are the glory days for heavy wood timber,” he says as he walks through the doorway of Structurlam’s Penticton manufacturing plant, where the signature piece of art for Vancouver’s new Telus Gardens building lies spread like gulls’ wings across the floor.

“We can do any shape in wood. We can make it elliptical; it doesn’t matter,” he said of the curved wooden beams, made from glulam, an engineered wood product crafted by laminating individual pieces of lumber in one massive beam, then shaped and formed by giant computerized woodworking tools.

Made from finely grained timber harvested from B.C. forests, the graceful, curved wings will look like a block-long breaking wave once installed at the Telus Gardens complex at Seymour and Georgia. They are massive beams of laminated Douglas fir, glued and shaped to express the organic beauty of wood.

“It’s going to be impressive when you see it on the side of the street when you go by,” Downing says the of Telus Gardens project.

Structurlam is a B.C. company that is pushing the boundaries on engineered wood products. From its three plants at Penticton, Okanagan Falls and Oliver, they are making products that are showing up in innovative projects across North America.

The company is already known for buildings that feature wood like Richmond’s Olympic skating oval, the new Ronald McDonald House next to B.C. Children’s Hospital, and the University of British Columbia’s Earth Sciences Building.

It’s an example of a growing number of B.C. companies that are riding a new wave of technological advances in wood construction. These advanced products in turn are changing the way architects, designers and builders think about wood.

They are all using B.C.’s timber resources to build the economy and create jobs. They are the leading edge of a wave of innovation that is using the primary wood products manufactured in British Columbia sawmills to create new and more valuable products that are capturing attention North America-wide for their green credentials.

Structurlam employs 150 people at its three locations. It uses standard dimension lumber from major forest companies like Tolko, Canfor and West Fraser Timber for is raw stock, but it also buys some of the most highly valued lumber in the province from niche producers on the coast or from Forest Stewardship Council-certified Kalesnikoff Lumber in the Kootenays. 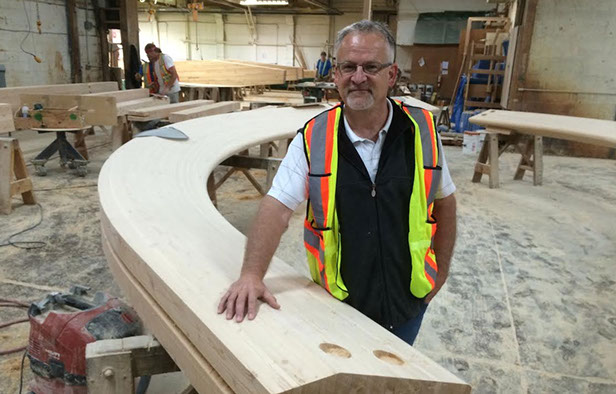 The big timber renaissance has been a long time coming. It began over 50 years ago in North America, with the commercial development of new engineered wood products, like glulam – glued and laminated beams like the ones for Telus Gardens. The next generation of products, like cross-laminated timber (CLT), is more recent. It’s only since 2012 that Structurlam has been manufacturing CLT, a solid wooden panel that can be up to 40 feet long and as thick as you want, made from rows of dimension lumber laid one on top of the other. Each row is laid at 90 degrees to the one below, and glued together.

“It’s plywood done with dimension lumber, if you like,” says Downing in describing CLT. It has the structural strength to replace concrete in large building applications. It can even be used for elevator cores.

In Vancouver, examples of massive cross-laminated timber panels being used instead of concrete are the five-storey-tall Earth Sciences Building, and Ronald McDonald House. In both structures, architects left some of the panels exposed, accentuating the warmth of wood.

One of the most impressive examples of engineered wood, however, is at the Frank Gehry-designed Art Gallery of Ontario, where a block-long facade of glulam timbers and glass has been described by critics as a billowing “crystal ship drifting through the city.”

Downing’s company provided the glulam. He was there in 2008 for the opening of the art gallery, which required seven thousand individually designed timbers to create the masterpiece.

•The adoption of 3D modelling by architects and designers.

•Linking 3D design to computerized machines referred to as CNC (computer numerical control) that mill the wood, making precise joints, fittings and channels for carrying wiring and plumbing lines. Everything is within two to three millimetres of accuracy, an impossibility in the days of hand-controlled levers and wheels.

“Everything from the model for the wood members goes to CNC machines,” Downing says.

“The trend is that the architects don’t want to see the steel connections. They want the steel hidden inside the wood. A sophisticated connection like this  requires a CNC to actually frame the wood. You couldn’t do it by hand for the accuracy required.”

Manufacturing the wood components and steel connectors in CNC-equipped factories means the final building can be shipped to the construction site and assembled quickly. The cost of materials is about 10 per cent higher but it can be made up through shorter construction time.

Further, notes Downing, structures can be built year-round without concerns about concrete pours in below-zero temperatures. It’s a big reason they are winning bids in the north.

The three technological leaps, Downing says, mean that products like glulam and cross-laminated timbers can be shaped in any way a designer can imagine. Perhaps the most impressive example is the five-storey-high staircase at the Earth Sciences Building. The stairs are cantilevered out into the open space of the atrium, as if they are suspended in air.

Downing describes the advances as disruptive technologies. The new products led to advances in timber engineering, which led to an explosion of creative design.

Advances in wood technology prompted the provincial government to adopt a Wood First Act in 2009, requiring that wood be considered in publicly-funded construction to promote a culture of using wood. The building code was also amended to permit higher wood buildings. Other provinces have since followed suit.

Now, the sky’s the limit: Last year in Chicago, just to prove that it can be done, an architectural firm redesigned an existing 42-storey tower using laminated timber columns, eight-inch-thick CLT floors and solid timber shear walls. It was a design exercise only, but for B.C., there is an irony in an American firm taking the lead in tall timber design: The research was financed by the Softwood Lumber Board, which is funded by Canadian softwood lumber duties collected by the U.S. during the lumber trade war. The board notes that up until now, massive timber buildings have only been championed by a handful of architects, mostly from Canada and overseas. Downing says although competition is growing, it’s creating an awareness of wood that’s benefitting all players.

“When I visualize it, I think of all these technological advancements coming on one side, then I see this whole drive to use more wood, especially in commercial structures on the other side,” says Downing. “That’s what’s happening right now, the combining of these two things. It really is the glory days for heavy timber.”

Downing says the structures being designed now were unimaginable only 10 years ago. When it was completed in 2012, the UBC Earth Sciences Building was the largest wood-panel building in North America. But it will be eclipsed later this year when the Prince George Wood Innovation Design Centre opens.

“This will be the tallest wood building in Western Canada,” says Downing. “You talk about innovation. Imagine this: We can build a seven-storey building, fabricate it here in Penticton and ship it anywhere in the world. This one got shipped to Prince George. I think that’s cool. Using B.C. fibre, using B.C. labour, all done right here in the Okanagan.”

Structurlam has a long history in the Okanagan, being founded in 1962 by brothers Al and Gordon Kenyon. Through trial, error, and discovery, they built up a business in laminated wood beams, the over-sized Expo hockey stick, now a fixture in the Vancouver Island town of Duncan, being an example of the earlier technology.

They also penetrated the Japanese market where their glulam beams began to replace traditional timbers in Japanese post-and-beam housing.

Ownership of the company was transferred to Al Kenyon’s two sons in the 1980s and to their brother-in-law, Mark Rufiange, in 2000. Rufiange automated production by bringing in CNC technology and in 2007 sold to the Adera Group, a Vancouver development company. Adera embarked on an expansion program that almost tripled glulam capacity and in 2012, opened Western North America’s first cross-laminated timber plant at Okanagan Falls.

Downing, a registered professional forester with a diverse background in manufacturing and and a former head of B.C. Wood, came in as president in 2007.

Gordon Hamilton is an award-winning writer and freelance journalist specializing in the resources sector.