A global leader – but word has not gotten out

Is Canada leading the world in natural resource development? And what does this question mean for how British Columbia approaches the extraction of its non-renewables and renewables?

These questions have infused public discourse in recent days.

On April 30, a poll conducted by Ipsos Reid for Resource Works found that most of us – 72 percent – think that natural resource development is good for BC.

Most people agreed industry and government need to work harder to address issues that are preventing people from coming together on key questions.

One such area of contention is over whether British Columbia is a world leader in sustainable natural resource development. Just 49 percent agreed that it is.

On May 1, Prince George Citizen editor Neil Godbout waded into this topic with a column entitled If not here then elsewhere. His point: if projects are shut out of Canada because of opposition such as NIMBYism, resources will simply be extracted elsewhere, inevitably in a less responsible manner.

A recent (December 2013) McKinsey Global Institute report entitled Reverse the curse: Maximizing the potential of resource-driven economies provides some data to enhance our understanding of the issue.

McKinsey observed that more and more economies today are driven by natural resources, yet most of the world’s poverty is, paradoxically, located in those very countries.

So the question is, what do countries need to know about managing a resource economy so they can build better societies?

When McKinsey went looking for examples of good practice, one country stood head and shoulders above all others: Canada. We are a nation that has done a superb job in building a natural resource economy and supporting it through enlightened policies.

In three of six key areas, Canada was in number one place. In the other three, it ranked fifth or higher. Countries including Norway and Australia also rated very high. 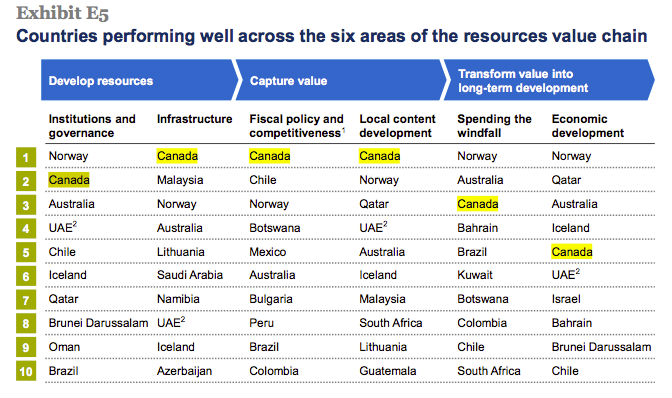 The implications of this data for British Columbia were well recognized by Godbout in his analysis.

He states: "For people who truly care about the environment, it's not enough to say build mines or pipelines somewhere else, because they understand that the pollution and other negative effects from these operations will still occur.”

The thinking is that facilities will get built, the resources will be extracted – and if it so happens that this occurs in countries with much less regard for the environment than Canada, it’s hard to argue that the environment has come out the winner.

The McKinsey report also suggests that Canada could perhaps do a better job in the categories labelled “spending the windfall” and “economic development.” The need for intergenerational stewardship has been identified by Resource Works advisory board member David Emerson as a moral question, and he pointed to resource wealth funds (BC is planning its Prosperity Fund) as an essential part of the answer.

People today are jaded. They have never been more skeptical of big business and government. Building trust in these conversations is difficult.

Yet, as the new Resource Works research also shows, citizens do need to see conflicts resolved so that we can have a healthy society. They are uneasy with the polarized “environment vs economy” arguments that seem to rage everywhere.

Younger people and those with lower incomes are, according to Ipsos, more likely to doubt that Canada is a global leader in sustainability. Women are also slightly more dubious of this proposition.

If these groups knew about the work of McKinsey and others looking at the same question, it seems reasonable to suggest this new information would help to raise confidence in Canada’s leadership capacity.