Dear media, let's fact-check before we publish, please. Josiah Haynes gets behind the latest misinformation on Fairy Creek. 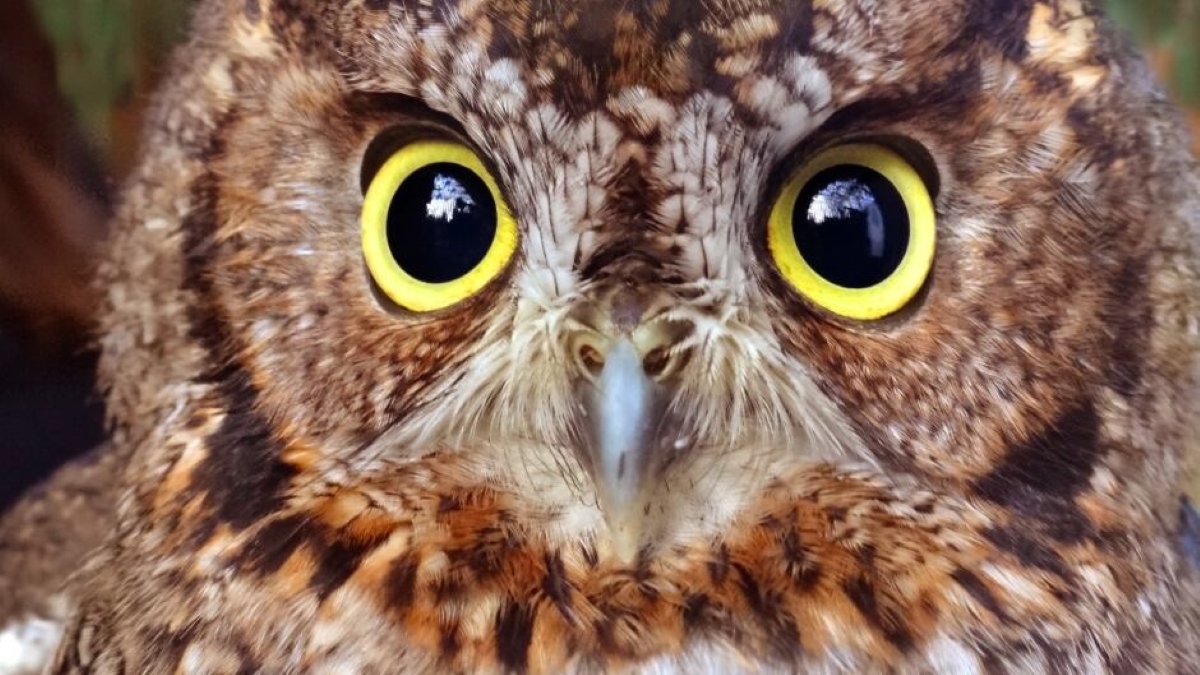 Accurate reporting is so important.

At times, it can seem like misinformation is everywhere. Half-truths and political spin dominate the political discourse on Facebook and Twitter, where most of us get our news.

Canadians and others around the world have been alarmed by the concerning rise of misinformation over the last few years. But in the midst of the chaos, many in the mainstream media see an opportunity to reclaim their traditional place as providers of trusted and verified information.

That's why I was surprised to see yet another established newspaper print obvious errors in a recent article on Fairy Creek. 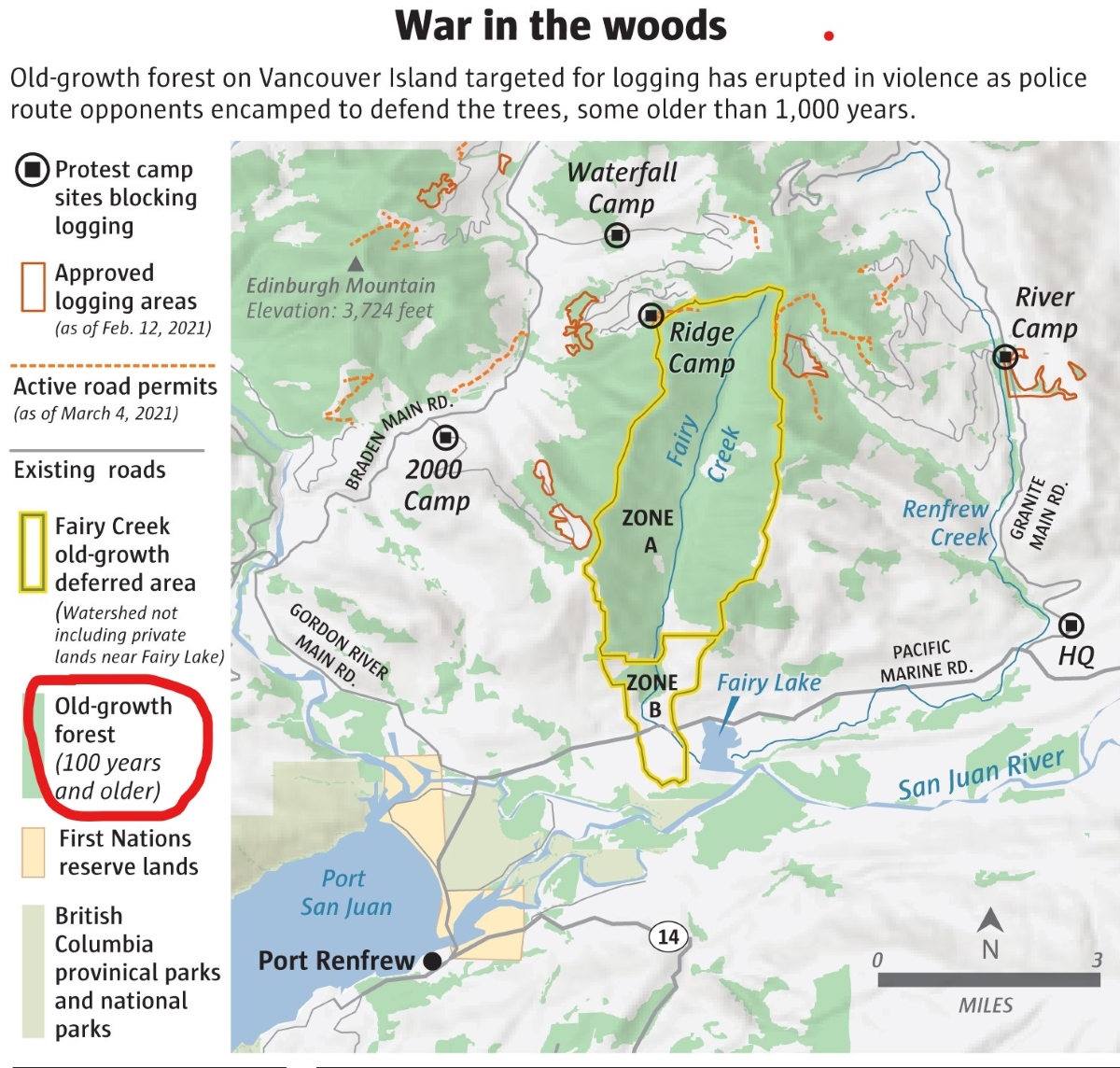 Flawed map from the Seattle Times.

This map from the Seattle Times incorrectly identifies and maps trees older than 100 years as old growth forest.

For those who don't know, old growth is defined as 250 years plus on the coast. Not the 100 years the Seattle Times map says.

That's an error also made by an environmental non-governmental organization called the Wilderness Committee: 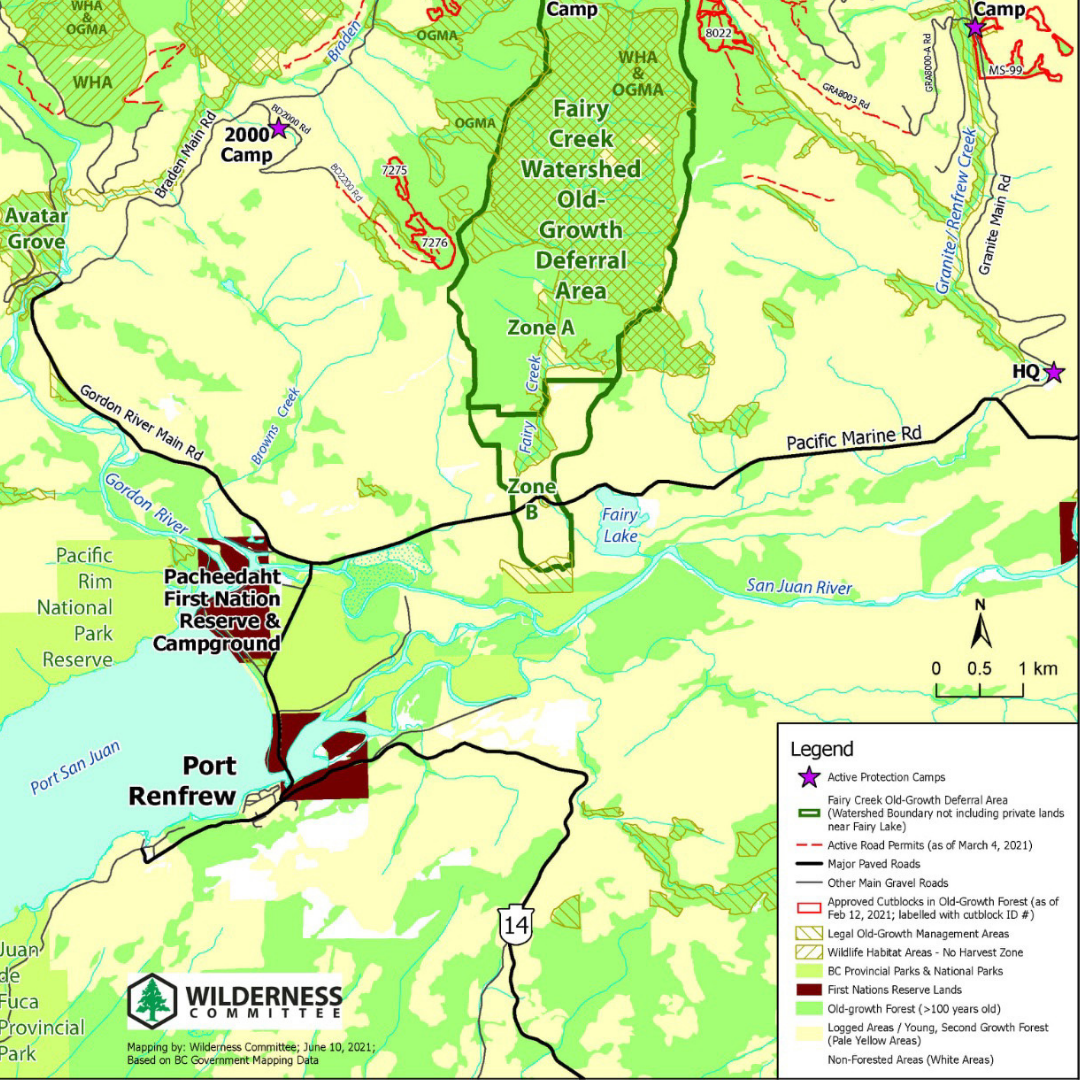 I must confess that I'm at a loss for why organizations like the Seattle Times and the Wilderness Committee fail to look up the accepted definition of old growth. Unless the error is intentional, in which case British Columbians should ask themselves why environmental protesters appear to feel the need to resort to obfuscating accepted definitions.

But that was not the only error I've seen reported in popular news stories on this topic.

The Seattle Times wrote: "This nearly 3,000-acre Fairy Creek watershed is unprotected, other than by a two-year deferral on cutting enacted last June".

It's true, the BC government deferred all old growth logging in the Fairy Creek and central Walbran areas following the request of the Pacheedaht, Ditidaht, and Huu-ay-aht First Nations in the Hišuk ma c̕awak Declaration on June 7, 2021. The First Nation titleholders requested the deferral in the 2,000-hectare area while they build their own resource stewardship plans for forestry on their lands.

But the Seattle Times is incorrect once again. The two-year deferral is not the sole protection applied to Fairy Creek.

Between Old Growth Management Areas (OGMAs) and Wildlife Habitat Areas, as much as 2/3rds of Fairy Creed is already protected.

That seems like a glaring omission for an ostensibly reputable paper.

The paper also wrote: "Old growth already is vanishingly rare in the province — and going fast."

Again, that's just not the case.

As Resource Works has previously written, old growth is abundant. 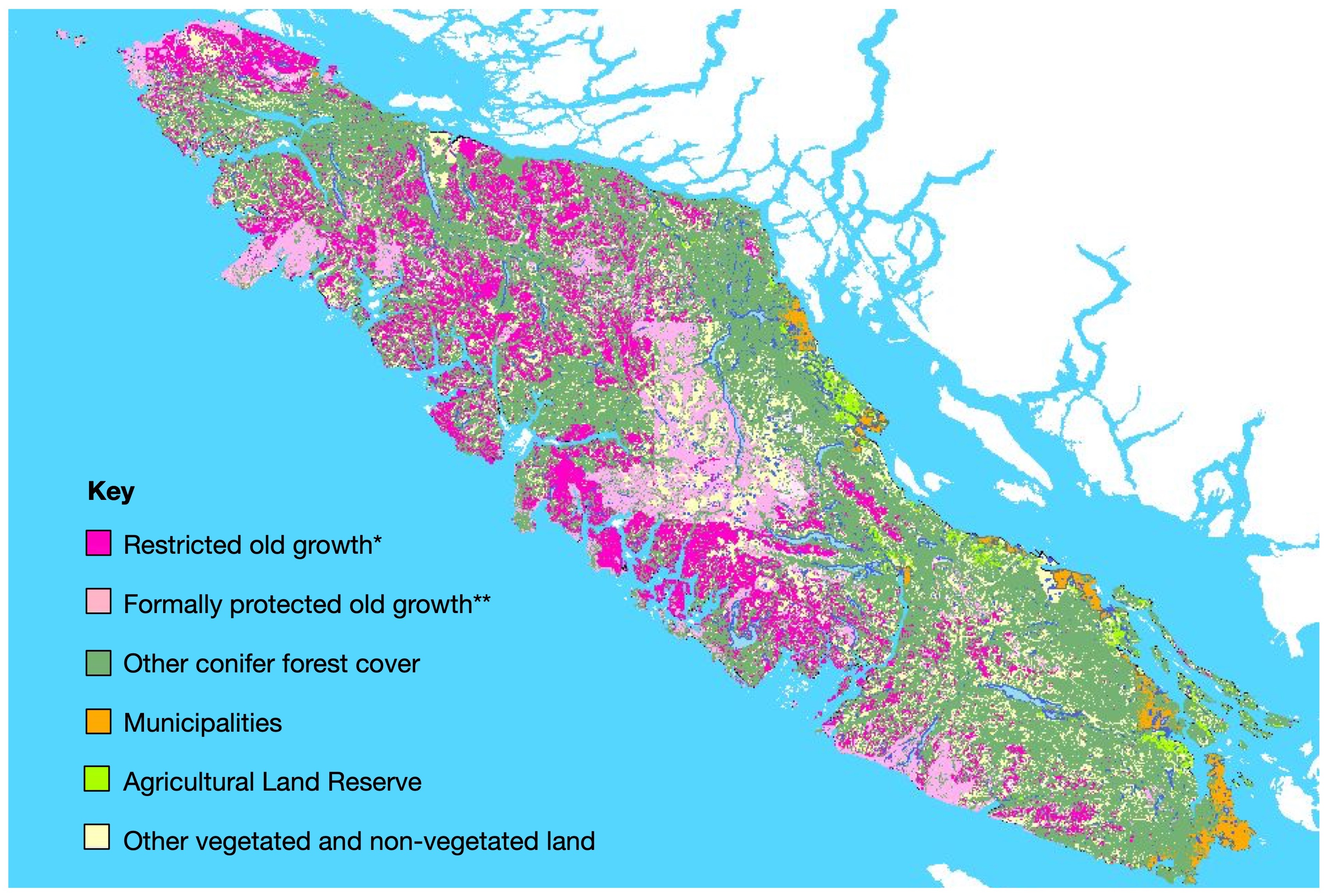 Not only is much of Fairy Creek already protected, but it also isn't even the "last old growth," as some like to say. Not even close. 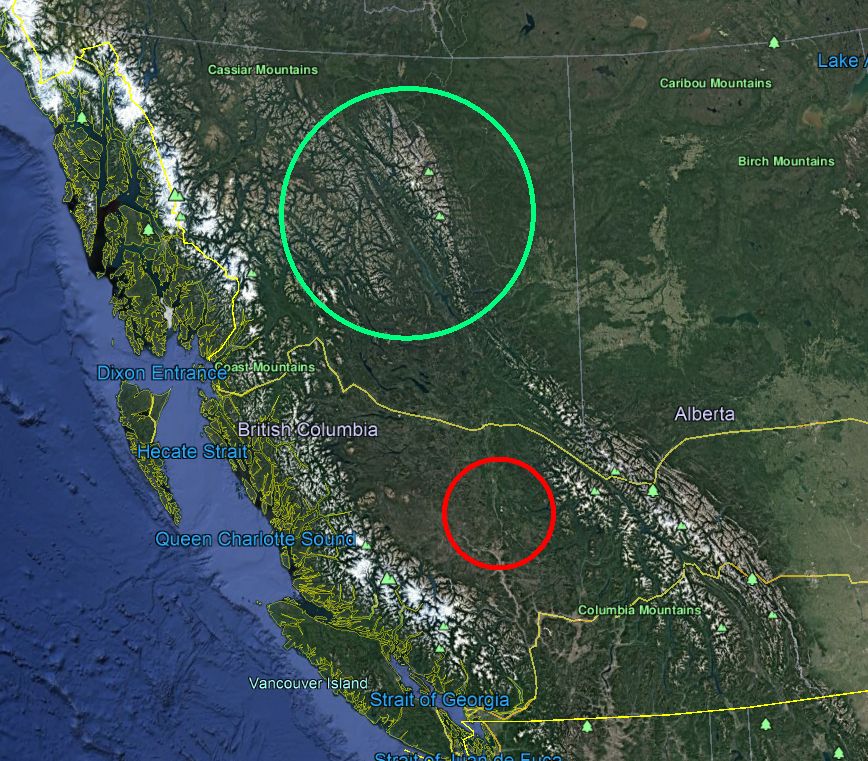 BC is a world leader when it comes to forest conservation.

Having corrected the definition of old growth, explained the existing protections in Fairy Creek, and shown the abundance of old growth forests in BC, let's take a look at another piece of misinformation given air time by the Seattle Times, among others.

There is an increasingly popular (and incorrect) refrain that Fairy Creek is home to a multiplicity of endangered flora and fauna.

Among other species, the Seattle Times cites the threatened Western Screech Owl.

Yet, compared to nearby locations, Fairy Creek can't boast a notable Western Screech Owl population. But I don't see any concerned citizens speaking up for the besieged owl population of the town of Duncan, north of Victoria. 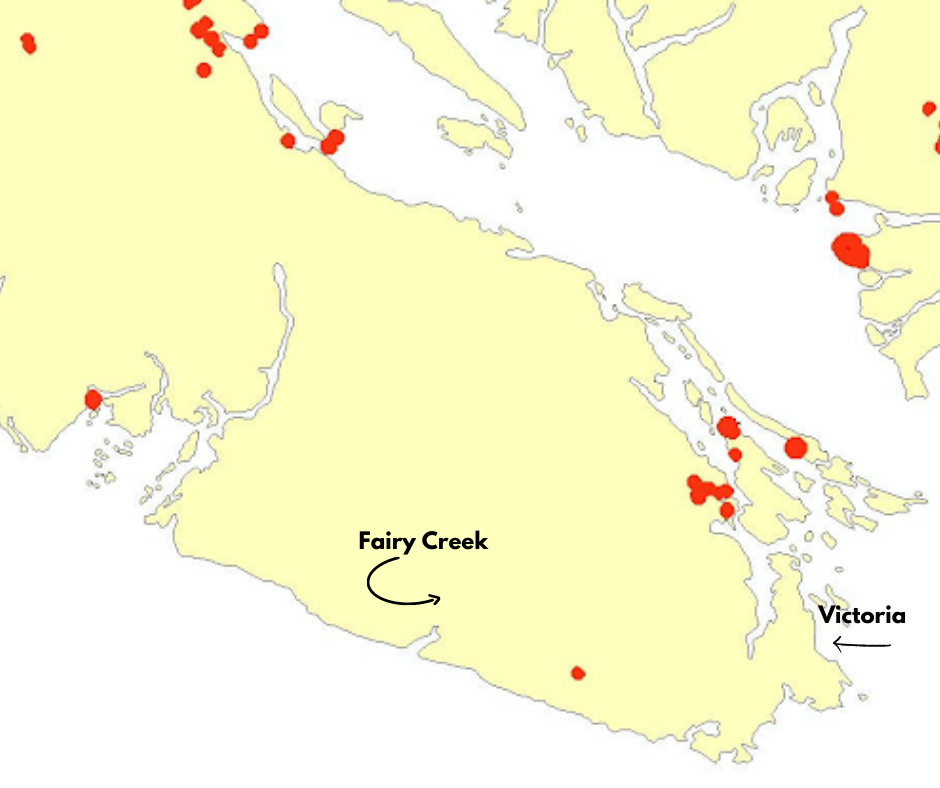 With so much of their previous rhetoric debunked, Fairy Creek blockaders must have been relieved to discover that besides Western Screech Owls, lichen, northern goshawks, western toads, northern red-legged frogs, and brown bats all call Fairy Creek home. According to some, that means that all logging in the area should stop, lest it endanger these species further.

At this point, I should say that along with preserving the economic lifeline logging is for Vancouver Island communities, conserving sensitive habitats and endangered animals is also a valuable objective when determining how British Columbians make use of their forests. Good forestry policy is about finding the right balance between values like these.

Nonetheless, I can't help but think these objections are disingenuous.

Let's take a look at a map of species-at-risk on Southern Vancouver Island: 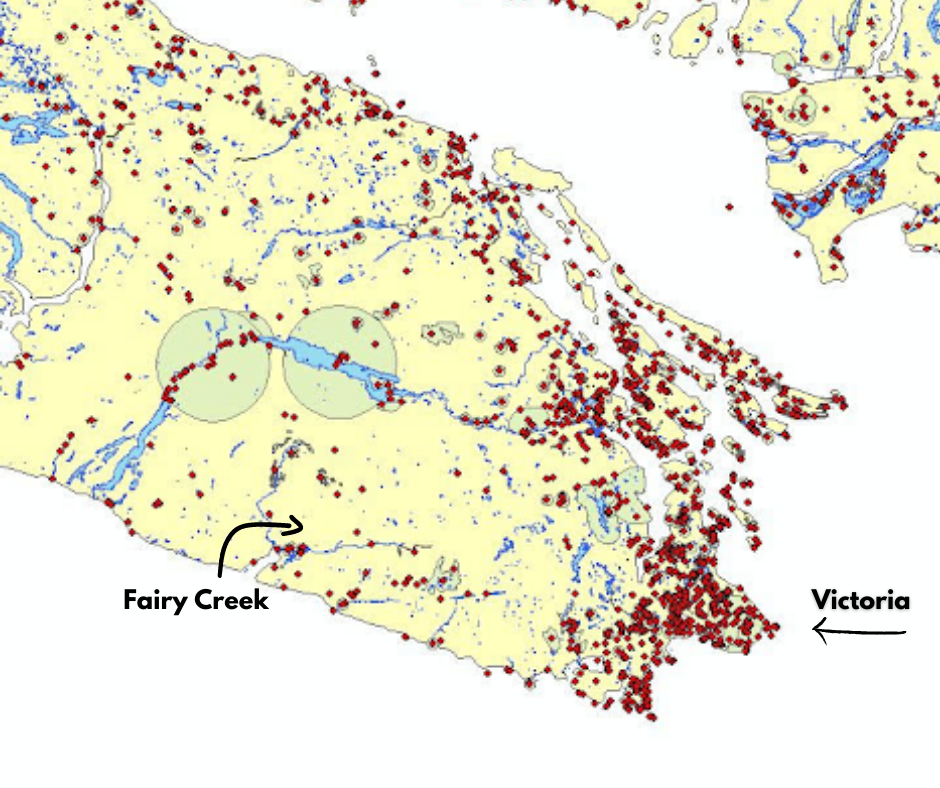 Map based on COSEWIC Public Data.

Perhaps those concerned for at-risk species should relocate their protest to Victoria's City Hall.

None of this is information is secret. None of it is hard to find. In fact, it's quite easy to find the definition of old growth, existing protections at Fairy Creek, the amount of old growth in BC, and the location of at-risk species.

But when you have a chance to mislead a province into donating hundreds of thousands of dollars to your hobby, I doubt accessing verifiable information is a priority.

Before being shut down, the Fairy Creek blockaders' GoFundMe raised $713,000. Now, it's moved to a different crowd-funding platform where an additional $401,000 has been raised. The same group has another fundraising campaign bringing in $25,000 to cover costs associated with the consequences of breaking a court-ordered injunction and leaving their vehicles and belongings where they have been ordered to vacate.

There are over a dozen crowdfunding campaigns on GoFundMe and Fundrazer alone. One brought in $156,000; another brought in €23,333, or $34,936 Canadian. The majority of the dozen or so other Fairy Creek fundraising campaigns have raised between $500-$13,000.

Professional protesting is its own industry. And when there's this much money to be made peddling fairy tales, it's no wonder facts are in short supply.

With so many people tuning in, we have an opportunity to have important conversations around the future of BC forests. But let's do a fact check before we publish, please.

Josiah Haynes is the research and communications coordinator at the Resource Works Society.