"It's time to stop apologizing for our oil industry"

Alberta's energy minister turns out to be a major booster of the oil sands - but what will it take her to share those views more widely?

In a surprise move last week, Alberta energy minister Marge McCuaig-Boyd told a private gathering of oil and gas executives it was about time Albertans “quit apologizing for our oil industry because we are the best.” 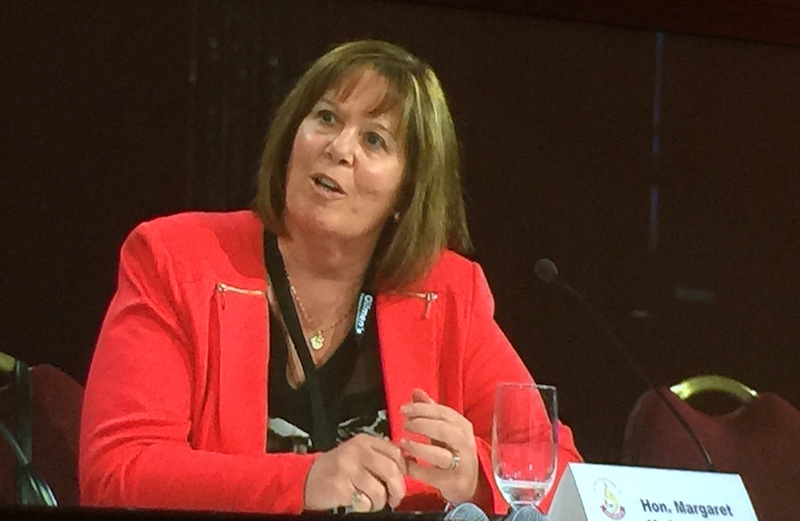 Her audience had barely climbed back into their chairs before McCuaig-Boyd further stunned the room by citing a Fraser Institute report praising pipelines over rail transport of oil, then completing the tour de force with a glancing appreciation of conservative media gadfly Ezra Levant’s “ethical oil” argument.

Given the drubbing the oil industry has been receiving from the markets lately, the executives seemed to be in a state of shock after the remarks, delivered in the resort town of Banff.

It was, to say the least, not what the audience expected to hear from an NDP government that won office promising to squeeze the oil industry through royalty increases.

Or was it surprising? The remarks came as the Alberta NDP prepare for a byelection in the Progressive Conservative fortress of Calgary-Foothills on Sept. 3.

Its candidate Bob Hawkesworth was jeered at a candidates’ forum when he said the NDP is a friend of the oil industry.

Although McCuaig-Boyd was received politely, the reason the Hawkesworth "friend" statement was regarded with skepticism is that since taking office, the party has pursued a royalty review that may already have resulted in reduced incentives for the petroleum industry to operate in Alberta. According to industry observers, including lawyers who put investment deals together, this is already happening as international investors park any thoughts of investing there until the question is resolved. The impact of this is hard to see because it will not be felt for years, and then only in the form of activity that does not happen.

One thing that would have improved the occasion for the energy executives in Banff: the satisfaction of hearing McCuaig-Boyd cancel the royalty review altogether. Because of the byelection timing, some will dismiss the energy minister's statements as mere politicking. As Sept. 3 nears the government will be under increasing pressure to scrap the royalty review, and meanwhile it watches as every $1 slide in the price of oil reduces its spending capacity by $148 million.