BEHIND THE NEWS: ResourceWorks News takes a look at how GIS data is being employed to create a highly misleading picture of forest practices. What we discover is confusing, to say the least. 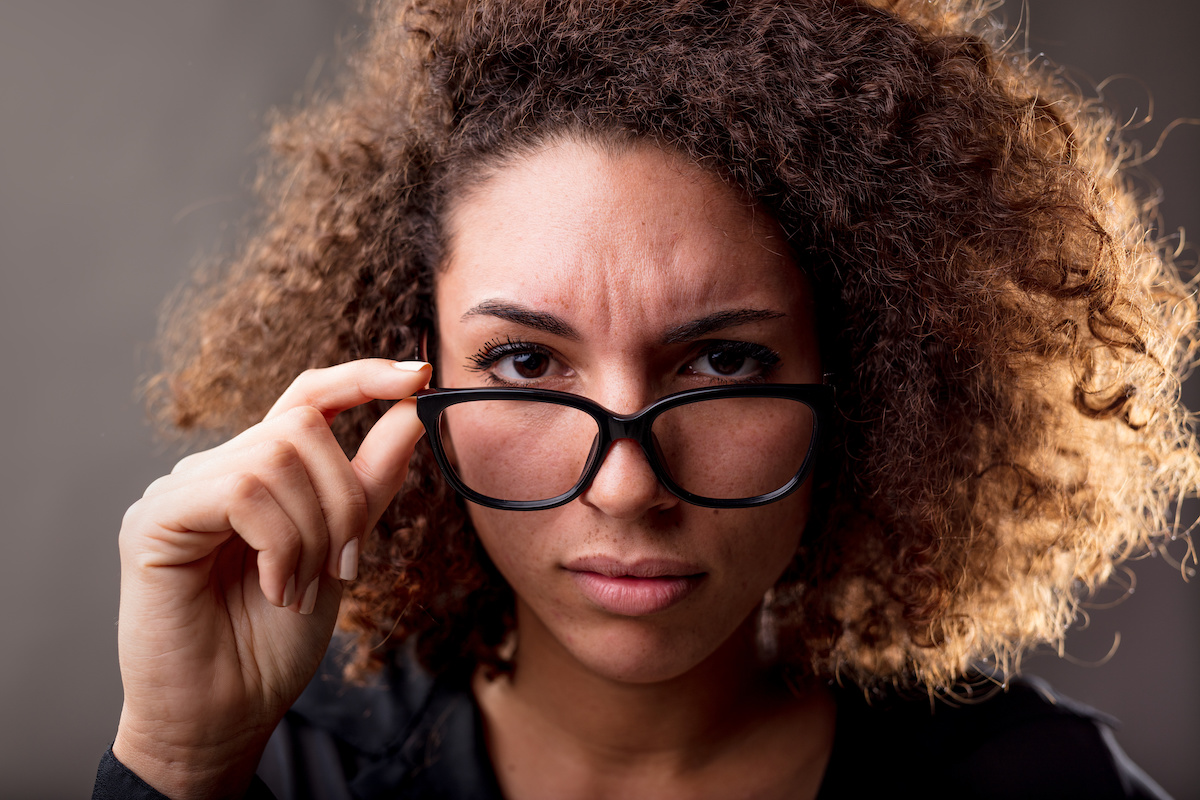 In the image below taken from a Conservation North online mapping tool that is making the rounds, the red areas represent "disturbed" forests in B.C.  At this level of detail, it appears there is very little in the way of "primary forest" – which the map tool's promoter defines quite vaguely as "natural forest of any age".

And when you drill down a little bit and look at just Vancouver Island, the impression is also of a vast and degraded region, with just a few areas of green representing natural forests: 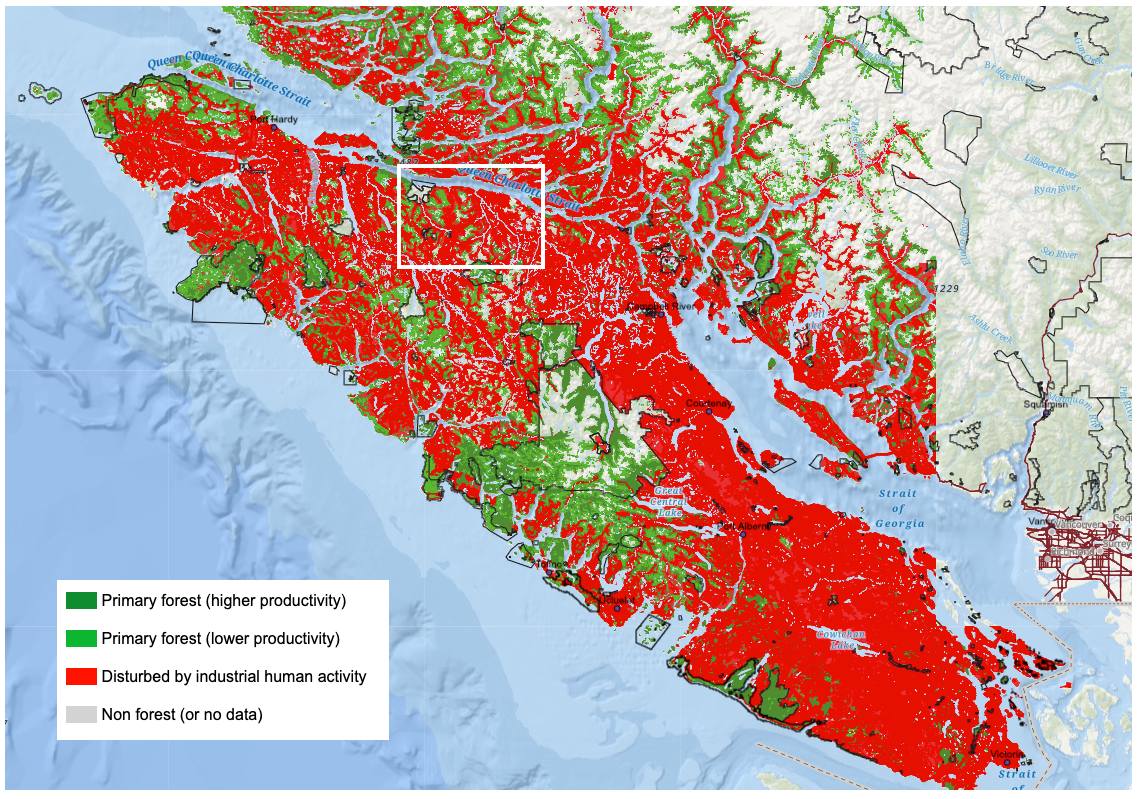 From this map, it would seem that the majority of the Island consists of land that has been “disturbed by industrial human activity.”

Okay, let's not get ahead of ourselves. We're going to keep drilling down to see what else is there. To get at more detail, consider the map below, which is a closeup of the area in the white inset box from the Vancouver Island section above: 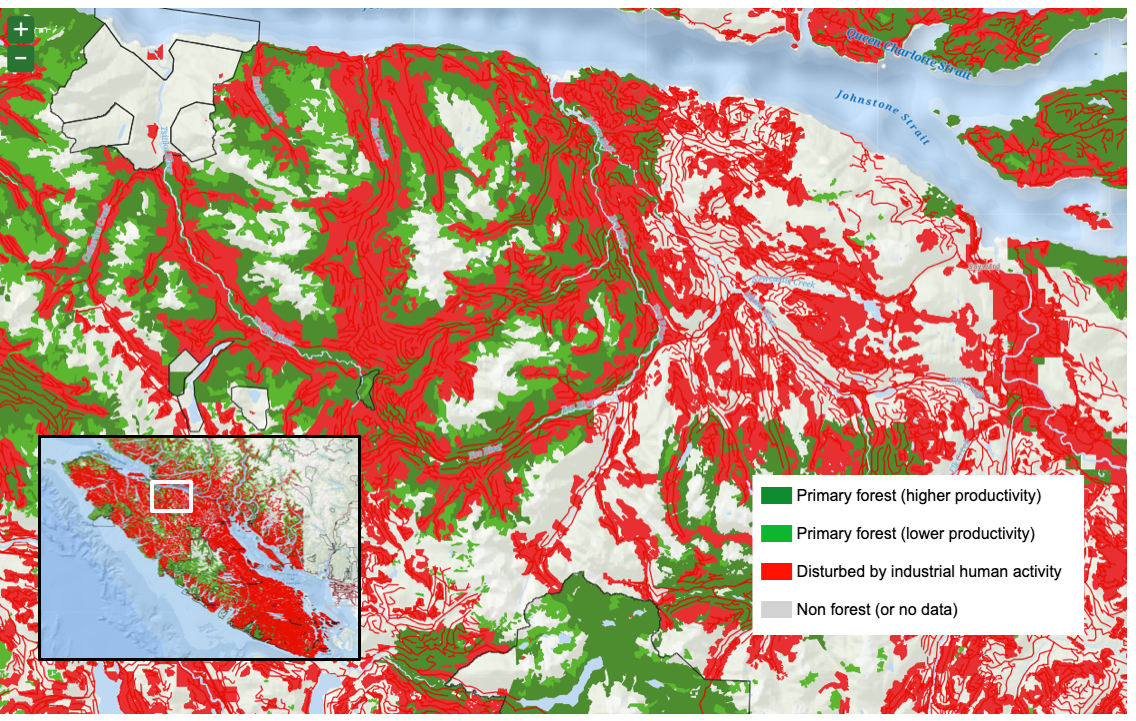 At this level, the picture starts to get more interesting. Much of the map area is depicted as red (“disturbed by industrial human activity”), yet now we realize that a significant proportion falls into another category, the one coloured in light grey shades. This is said to be "non forest", or areas for which there is "no data".

Based on this, there is only a tiny bit of true forest in this area. The rest of it has been subject to "industrial human activity", or been left deforested, or maybe is shrouded in mist that satellites cannot penetrate.

If you were wary of British Columbia's forest sector, but not very knowledgeable about it, you might at this point be concluding that even in more remote regions like shown above, the forest industry has wiped out pretty much all of the forest. (Which would be a silly thing for the industry to do if it was also rationally seeking to ensure its future survival, but let's park that thought for the moment.)

Now consider the image below from Google Maps. It shows approximately the same area as depicted above. Contrary to the Conservation North rendering, it turns out that this region is actually quite significantly forested. The only "non-forest" areas are roadways, lakes or adjacent Johnstone Strait.

There is plenty of evidence of forest harvesting. The lightest brown areas are the most recently harvested and subject to replanting. Darker brown areas are where new growth is already starting to show up. And then there are different shades of green indicating more mature regrowth. Yet none of this shows up in the Conservation North map, which depicts these healthy forests as simply "disturbed by industrial human activity." 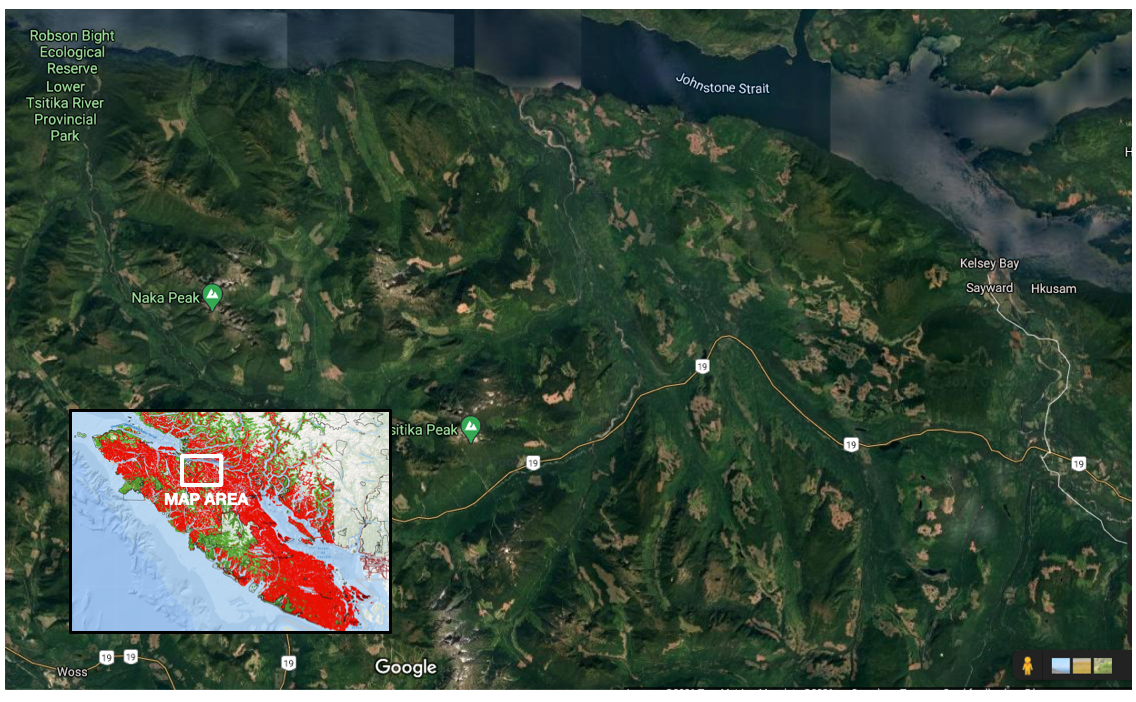 While the original Conservation North map claims that a large area of this zone is “non-forest”, it is plain to see from the satellite image that the reality is exactly the opposite of what is claimed.

Let's keep drilling down. In the two maps below we are looking at that same area, as seen by satellite (below left) and then as imagined by the creative colour-coders at Conservation North (below right). We've added some inset areas too.

Here is where things get really interesting. Above, an inset area is marked out. The images below show those insets. In the Conservation North map, below right, but for a small area of green, perhaps a park or First Nations Reserve, the entire area is either in post-industrial recovery or is not forest at all (if you believe Conservation North).

The satellite photo, below left, is of the exact same area. Yet it conveys a completely different impression.

Now this is confusing. Two images, same area. The satellite image on the lift shows a mostly roadless, verdant expanse of trees. Yet, this exact same area is characterized in the pressure group's map using colours that mean we are supposed to think it is de-forested, or that there is no data.

Clearly, the camera does not lie: this area is actually a healthy forest. Here's a closer photo image, from an area in the top centre of the inset area:

How much of the area across the province claimed to be "de-forested" is actually untouched, vibrant forest as in this example? Probably quite a bit. Here's another example, showing another category in which the Seeing Red map differs from observable reality:

The area shown is on the north side of Johnstone Strait, to the east of West Cracroft Island. In this case it's easy to see that some areas of the image, in both pictures, have been logged. Yet look at the large red area in the top centre of the Conservation North map, and then compare it to the satellite image at left showing the actual situation. What is depicted as being logged has obviously not been touched. So in this example, the amount of area logged has been inflated by something like one third.

Given that the two examples above were chosen at random, it's extremely likely that the flaws identified occur elsewhere.

To summarize, there are two distinct problems in the data that cast the whole project into doubt. The first problem is that large areas depicted as "non forest" are, in fact, very healthy forests. Secondly, significant areas are coloured red to depict the removal of natural forest when it's obvious to see they have not even been touched.

It’s not very hard to find these anomalies. Yet only a few map users will take the time to zoom in and ask themselves what is really being shown.

The devil truly is in the details. The whole premise of the Seeing Red campaign is in doubt. "Red Handed" is a more apt description of what's going on here.

Perplexing, too, is the term “industrial human activity". It seems intended to conjure up William Blake's "dark satanic mills" with black smoke billowing into the air. On closer examination, it turns out that the term "industrial" is being applied to activities that few people would think of that way.

Let's zoom in on one such area – the campus of the University of Victoria. The entire campus and its surrounding neighbourhood is tinted blood-red, suggesting it has been terribly blighted by industry. At right is the same area, except as it’s seen from Google Maps satellite view.

The truth is that on the west coast today, 42% of Crown lands (which make up a significant majority of the Island) remain in an old-growth state. This is a far cry from what Seeing Red, and other campaigns seeking to affect public perceptions, want you to believe. Defenders of the map say it's pulled from public data files; there may be some truth in this claim but it's clear that this still leaves plenty of room for massaging the message through arbitrary colour and layer choices. By a careful sleight of hand, including the selection of a lurid red tone that becomes the dominant colour when the map is zoomed out, an entirely false impression is created.

What's concealed by the use of the shocking red tone? One example is that it makes it difficult to see the old growth buffer zones that protect the features that British Columbians are unified in wishing to protect: waterways, cultural sites, big trees, specific wildlife habitat features among them.

It's difficult for a reasonable person not to conclude that the role of the macro 1:750,000 scale is to evoke a visceral audience reaction, which can be leveraged into skewed media coverage that builds potentially to bad public policy decisions.

Conservation is a valuable pursuit. Driving division and sowing confusion on the information is ultimately an anti-conservation activity. Arguing that "this is the only way we can get attention for our messages" is not a credible defence. There is plenty of value in bringing detailed geographic information to the general public – when it's done right.

Those seeking to gain public trust should be careful in how they use technical information, and avoid the temptation to create distortions. It's actually quite challenging to do this because the quality of forest mapping resources is acknowledged to range from very good to poor or even non-existent. As the recent B.C. old growth review panel noted in its report (see page 63), numerous errors exist where old forests are incorrectly labelled or mapped. Over time let's hope this changes, but for now the public should be wary of sweeping claims that seek to trigger emotional responses.

There are other ways to access forest data, for example via Hectares BC which eschews the hype by allowing everyone to access pro-grade GIS information. This is a great tool to play around with if you're genuinely interested in biodiversity, forest conservation, and the future of interrelated ecosystems.

For policymakers under pressure to make significant decisions based on characterizations of rampant industrialization, or irresponsible forestry, the true picture is much different than that presented by some pressure groups.

Let’s get back to evidence-based decision making. The fact is that British Columbia is a jurisdiction with rigorous environmental protections in place - as well as pressures from human habitation and habits, from industry, and from climate.

The lesson for decision-makers is clear: be careful about claims placed before you, and be sure to examine things carefully before arriving at your conclusions.

Has anyone else spotted other mischaracterizations in this data set? We’d like to know. Write to us at [email protected]