Against a backdrop of sensational headlines, activist antics and heated rhetoric about old growth logging, B.C.’s NDP government sets out to modernize forestry in the province. 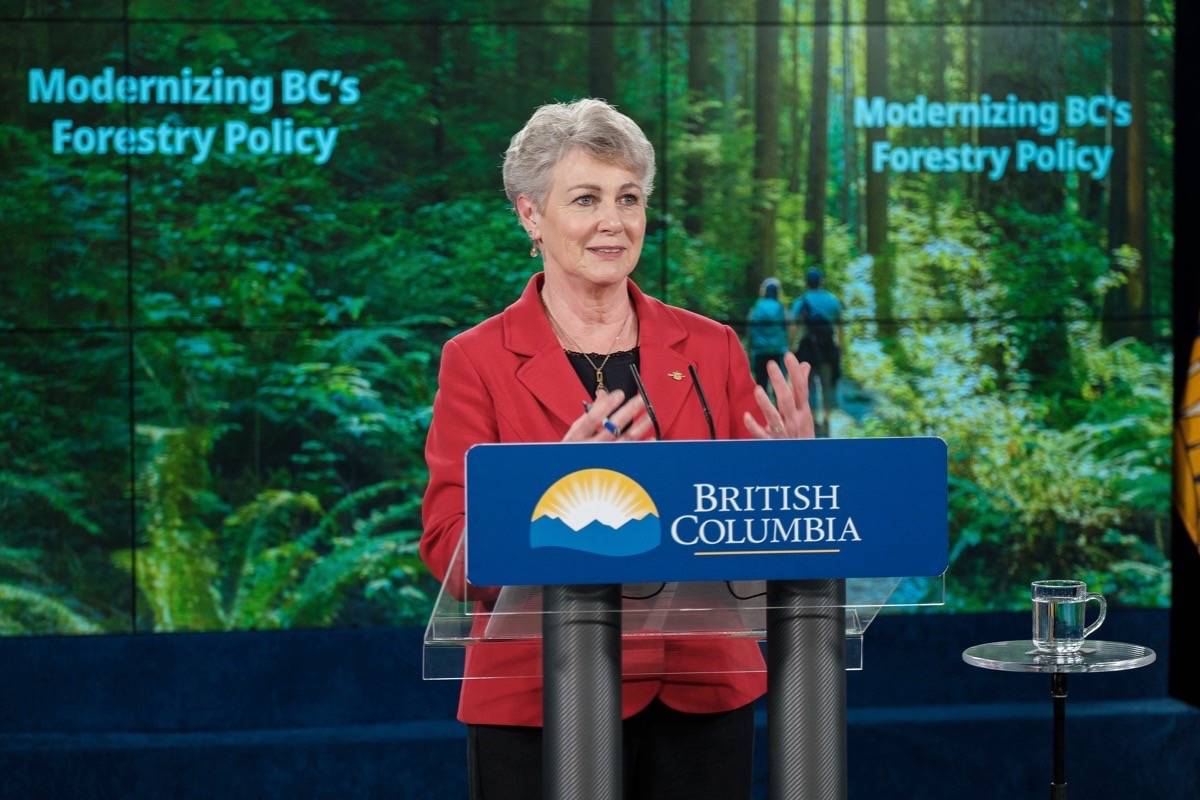 Unfortunately, it appears the government is giving in to the loud voices of the forces of ‘No’ and ignoring other voices, including its own labour base.

The impact looks to be devastating. As of October 2, 2021, a minimum of 4,500 direct jobs are at immediate risk in deferral areas. The decision means as many as 20 sawmills could close along with two pulp and paper mills. That is just the beginning. Entire towns and subsidiary industries are being placed at risk. Metro Vancouver businesses and jobs will also be hit.

After four decades of reporting on B.C. resource issues, I cannot recall a time of self-imposed social dislocation on this scale. How we got here is deeply concerning.

In June, environment minister George Heyman and forest minister Katrine Conroy announced the formation of a five-person Old Growth Technical Advisory Panel to advise the government on how to implement a 2020 report that called for a paradigm shift in how old growth forests are managed.

Minister Heyman is the former executive director of Sierra Club BC. So it’s quite the coincidence that four of the five appointees have ties to the very same organization. Sierra Club BC expends great energies whipping up concern about forestry in the province, a track record that would have been impossible for those composing the panel to overlook.

Even if all those members are skilled, independent professionals, we should be concerned any time a minister appoints four people with ties to his former employer to a five-person panel charged with considering the broad future of the province’s largest goods export sector.

Consider that one appointee is a registered lobbyist who has been active in the Sierra Club’s fight against logging old-growth and is best known as a campaign strategist. It’s pretty obvious that the outcome of the panel was determined before any work was done or evidence considered.

Imagine the cacophony if this body was 80% made up of delegates from a single large forest company or industry association.

While I’m wary of calling out specific individuals who no doubt believe passionately in their cause, nevertheless it must be pointed out that another two members of the panel are linked via Sierra Club work and are also married to each other, meaning one household holds two of the five seats.

Three of the appointees are the authors of an old-growth study hosted on the Sierra Club website and relentlessly promoted by that pressure group. Furthermore, the Sierra Club provided the mapping talent for this study.

It is this report, claimed to have been written on a “voluntary” basis according to its authors, that started the oft-repeated claim that only 3% of B.C. old growth remains. Independent studies – ignored by the panel, naturally – show that the influential 3% claim turns out to be worth exactly what was paid for it.

For example, the new Status of BC’s Old Forests: The Situation in 2021 study by ForSite was pointedly ignored by the Sierra Club panel. It found that over 3.3 million ha of old forests, or about 30%, are growing on high productivity sites capable of producing big trees. Clearly, the science is far from settled.

An ongoing mapping analysis we undertook at Resource Works found about 19.2 million hectares (ha) of old growth in B.C., almost a third of our total, 57 million ha forested landbase. About 6.9 million ha or 36% of that is protected – again, a far cry from 3%.

Only one of the five panel appointees, professional forester Garry Merkel, could be described as independent. Mr. Merkel is a member of the Tahltan First Nation and a Registered Professional Forester. He has been deeply involved with First Nations development for decades, and co-authored the 2020 report on old growth forestry.

It is a travesty that the flawed study – clearly designed to induce panic irrespective of the facts – is now being embedded into provincial government policy. Small wonder that forest professionals have been in an internal uproar over the situation.

If the scientific case was so strong, why rely on a cooked process? Hard to say, but environmental politics are complicated stuff in B.C. A conventional political calculation would lean away from allowing the impression to be created that a minister with Heyman’s close personal ties has put his thumb – along with hands, feet and kitchen sink – on the scale.

The government seems determined to skate right past the blatant conflict of interest, with its news release thanking what it drily called a “panel of independent scientific and ecological experts”.

There is no question we need to continue evolving forestry in this province, considering how and what old growth should be preserved and where we should harvest. The forest industry has long had a key role in preserving old growth – think of MacMillan Park and Nimpkish Island, among many examples. Simply eliminating the forest industry solves nothing.

It was a previous NDP government that went through a similar process in the 1990s, resulting in huge swaths of land being removed from forestry and set aside in new parks. Land managed for non-industrial values has increased six-fold since that time.

The conservation map of B.C. looks like this today: 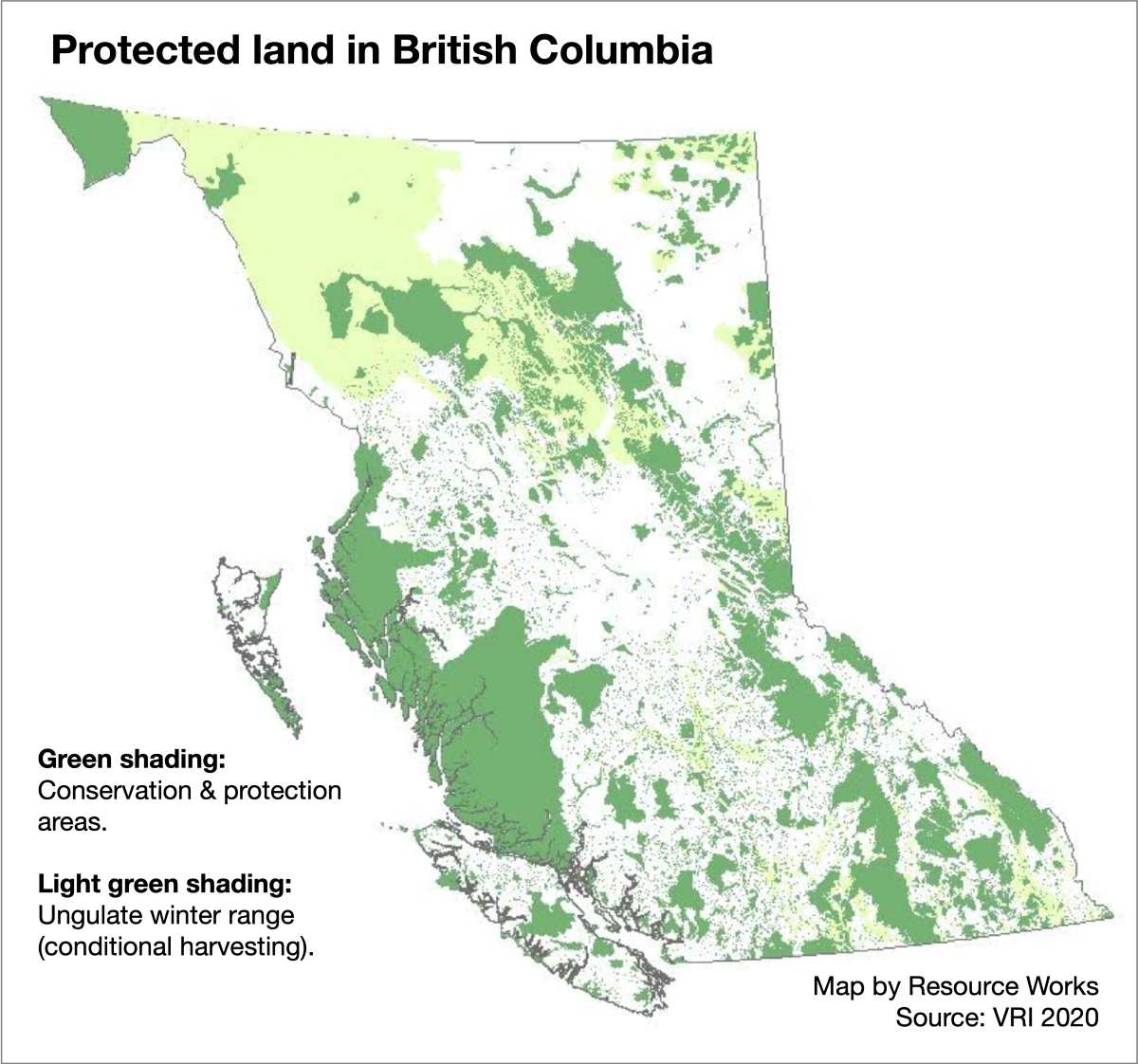 Before changes, the forest industry was already heavily constrained, with ever-shrinking access to the land base. Protected land stood at a minimum 37% of the total area of B.C., almost as large as the entire land mass of Germany.

Can you name a place in the world with more protections in place? I’ve searched for one, without success.

Modernization this is not. This decision represents anti-forest campaign strategists literally being handed the helm by government to go in for the kill.

Reasonable minds in the provincial government had hoped to leverage forestry as one of the ways for First Nations who live in forested areas to acquire, on their own terms, the economic wherewithal for true reconciliation. In the real world, this starts with access to own-source revenues stemming from economic activity. Forestry is one of the ways to combat the dependencies that continue to plague Indigenous peoples.

The insider moves of a narrow interest group appear to have snookered provincial cabinet, MLAs, citizens, and the broad forestry community. I truly wish I could state that those in charge of things are concerned about the economic and community carnage ahead. On the day of the changes, the forest minister was pressed in the Legislature to show any economic impact study about the effect of the decision. She had nothing to offer. Observers who have troubled themselves to study this question say as many as 18,000 British Columbians are now set to lose their livelihoods. The social costs could run into the billions, not to mention a massive shortfall in government revenues that will have to be offset by higher taxes, more borrowing or fewer public services.

Astonishingly, there is no credible conservation or scientific case for going down this path.

It might not be too late to recover the situation. The B.C. government would be well served to ensure that moving forward we correct course through a process that embodies mutual respect, diversity, empathy and the level of transparency voters expect.

Stewart Muir is executive director of Resource Works, an independent public interest research group. He will be participating in the Anacla Old-Growth Summit on the Huu-ay-aht’s Hišuk ma c̕awak Integrated Resource Management Plan on Nov. 23. This piece was originally published in Business in Vancouver.