ELECTION PREVIEW: There's no denying the importance of responsible resources to British Columbia

In 2017, the high-tech natural resource sectors – forestry, mining, energy, and the essential support activities for these pursuits – remain the economic drivers of the British Columbia economy. Here's why.

Aspiring to ever-better environmental practices is a shared value among the resource people I've been encountering around British Columbia and Canada over the past three years since Resource Works launched with a mission to improve knowledge and understanding.

We're so enthralled at Resource Works by the story of innovation in the natural resource sector that we launched the Naturally Resourceful series showcasing some of the companies leading the way in this regard.

And as we've discovered, there is a long list of other companies using cutting edge thinking and tools to keep getting better at what they do. Resource innovation is one of the brightest spots in British Columbia's high tech space.

At the same time, I'm discouraged that some people, including candidates for public office in the upcoming provincial election, systematically oppose resource activities that provide for the most basic of humanity's material needs.

There is something discordant about promising to eliminate tens of thousands of jobs and billions of dollars in infrastructure investment, as some candidates are doing, while they also try to argue that such actions will have not economic impact.

We know that developing clean energy, affordably, has to be a priority, hence the Site C hydro dam.

We know that creating an expanded Kinder Morgan pipeline should be something that environmentalists support for a range of reasons, including that it brings one of the world's most responsibly produced crude oils to a global market.

We also know that natural gas is a bridge fuel to a low-carbon future, even though some groups claiming to be concerned about the environment are opposed to various aspects of its development and use.

We know that when a new mine is built, it creates a positive ripple effect through local and regional economies.

And at a time when indigenous leaders are working incredibly hard to create economic opportunities in territories located mainly on the rural land base, influential non-aboriginals with romantic visions of how First Nations ought to live are fighting hard to suppress these advances by opposing resource projects.

Then there's the Trump phenomenon. Anti-resource policies that take away the jobs of rural residents will create a resentful underclass. Thanks to the U.S. experience, we now have a fresh memory of where that can lead.

The economic price of removing British Columbia's natural resource industries will be incalculable hardship for millions of residents. Canadians generally are at risk too.

Though it's commonplace to think that manufacturing jobs are among the ones that will "replace" natural resources in Canada, in fact there is ample evidence to show how risky it is to rely too heavily on factory-type jobs. Not so resource jobs, which pay much better than manufacturing and use capital much more productively. Here are two charts from a recent RBC Economics study, The Decline in Manufacturing’s Share of Total Canadian Output — A Source of Concern?: 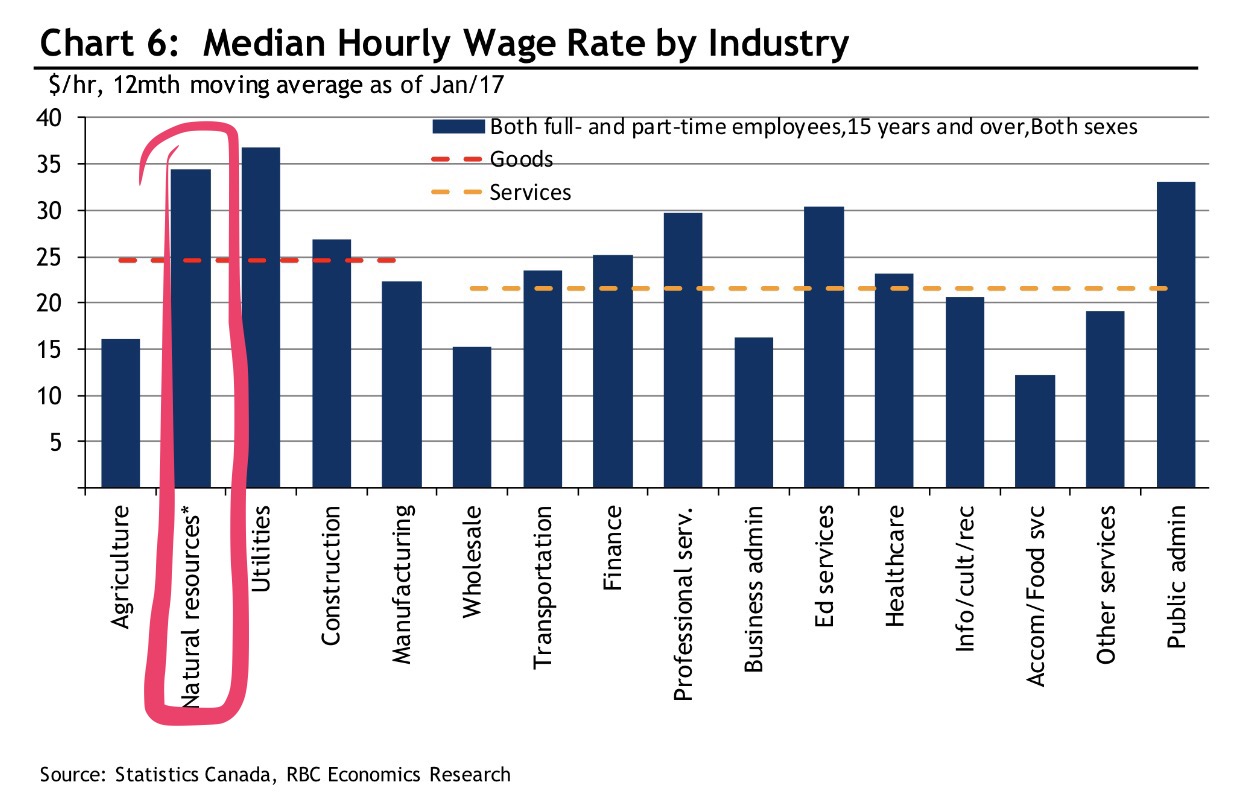 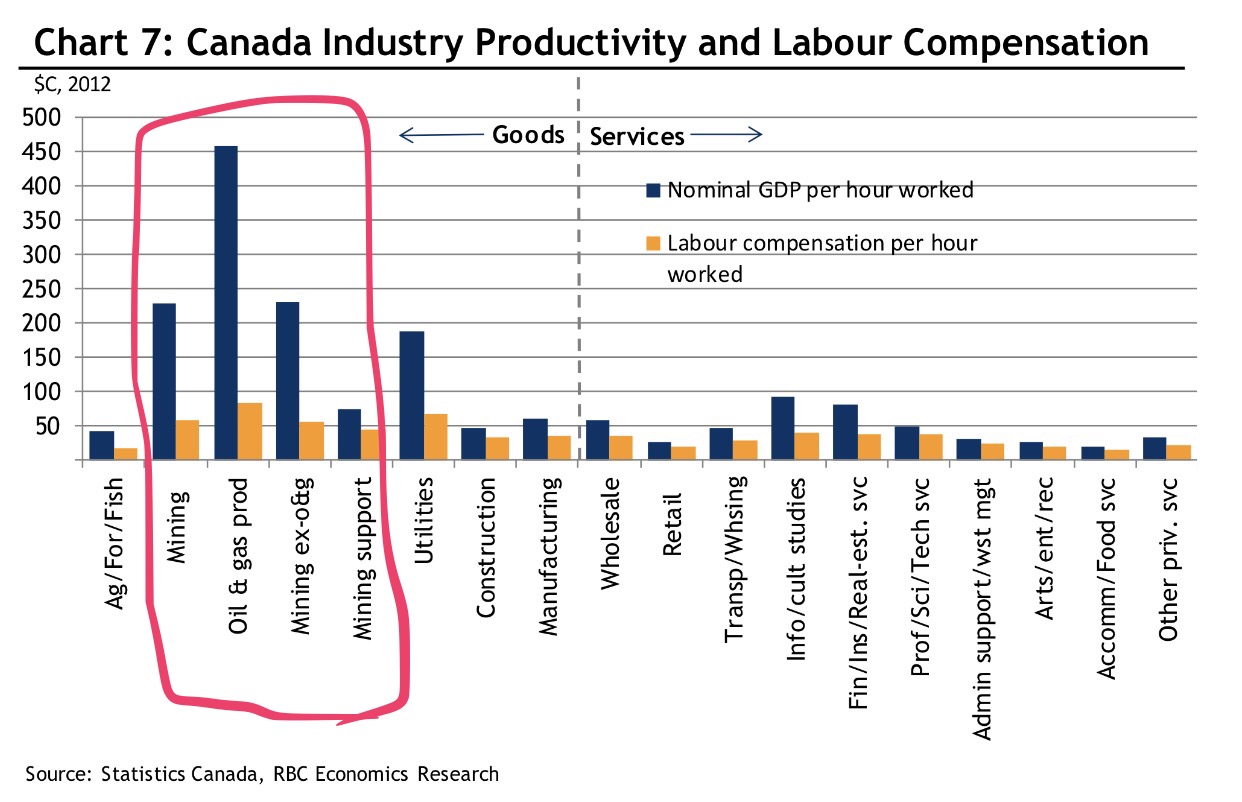 Check out the areas circled in pink. Look at high those bars are. Can we just "drop" the resource economy? Possibly, if we keep saying No to things. But that doesn't mean there would be no consequences, because we'd also be dropping the most enduring, enriching, and productive jobs we have.

If you've read this far, you probably don't need any convincing of the need for resource projects. The problem is showing that to others effectively. So here's the thing. To make positive change, we need to see broader recognition that a modern, responsible natural resource sector is working well and working for everybody.

Being effective means living in the moment. It means working through our political and economic systems and cultural traditions. In 2017, it's a bit of a cliche to say the answer is to connect on values, not facts. Which is quite a challenge now that "fake news" is not just a catchphrase but rather a new political currency.

In the upcoming BC election, the resource denial movement can expect to gain plenty of traction by spreading a plethora of non-factual claims under convincing-sounding headlines. Those concerned by this should be thinking about ways to be disruptive and make a difference through their own actions.

On our website, there is a now a lot of solid, verified information that we've been working hard to research, develop, and make accessible. I'd encourage those who share my concerns to browse and redistribute our material.

We know that the problem of public confidence is only partly about contested facts. There is a lot more to it. I'm going to share some words from a great Canadian thinker, Brian Lee Crowley. He delivered them when we invited him out to his home province to speak a couple of years ago:

It goes without saying that we are exceptionally lucky as Canadians to have our fantastic endowment of natural resources, including water and agricultural land as well as minerals, coal, oil and gas. But the real reason Canada is lucky, and the reason why the world beats a path to our resources, is not chiefly due to the resource endowment.

What makes that endowment almost uniquely valuable in the world is that it exists within another vastly more important endowment of rules, institutions and behaviours.

Consider that the world’s wealthiest societies, be it Switzerland or Japan or Singapore or Taiwan or Germany or many others I could name have no natural resources to speak of.

On the other hand, economists often talk about the curse of natural resource wealth because many of the societies that are blessed with such wealth do not know how to control it. Like many a lottery winner they are ruined by their good fortune. Just think of Nigeria, Venezuela, Indonesia, Angola, Algeria, Russia or Saudi Arabia and ask yourself if you think life is better there for the average person than it is in Canada. I am pretty sure the answer is no.

What makes the difference? It is all chiefly due to that endowment of institutions and behaviours I talked about. In Canada we have the full set of institutions and behaviours that as a matter of empirical and historical fact confer economic success. Many of these Harvard historian Niall Ferguson summed up in his book Civilization as the six killer apps of western democracies.

I will tell you what I think it entails: the rule of law, independent judges and reasonably speedy and reliable resolution of disputes, the enforcement of contract, robust democratic institutions, respect of human rights, the absence of corruption among government officials and the police, respect of private property, moderate, predictable and stable taxation and regulatory burden, a stable currency that keeps its value, responsible public finances, freedom to trade both domestically and internationally, a well-developed work ethic and a refusal to resort to violence to resolve political disagreements. That is the greatest endowment that we have.

In short, as Canadians we are absolutely right to continue our traditional pursuits of mining, forestry and energy. It goes without saying we will continue to have the best regulations for as long as we remain as open and transparent a nation as any other.

I recently travelled to India to share the Resource Works vision with a global gathering of resource leaders. Canada's success as a resource nation was one of our primary themes. My presentation looked at disruptive innovation and how Canada has been quietly setting a model of good practice. Our technological, institutional, industrial and cultural innovations really are the special thing about how we do resources, and a country like India desperately needs to know how we've gotten to be so good at it.

The knowledge that Resource Works has gained is out there for everyone to access, and I hope it will be part of creating a better informed conversation as democratic decisions are made in 2017.

Stewart Muir is executive director of the Resource Works Society. Got a question or comment? Drop him a line directly to [email protected] 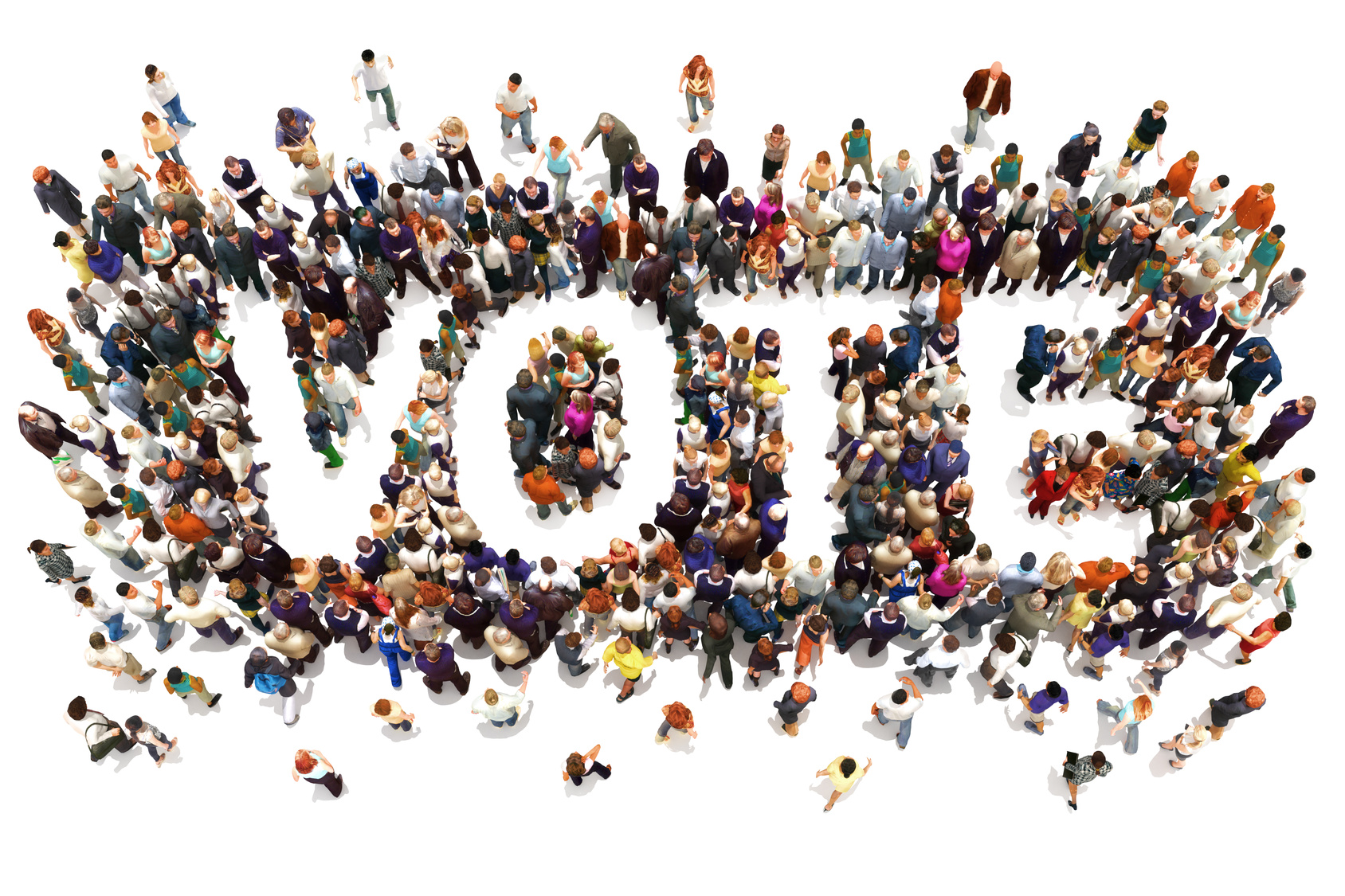