Is it possible for a region to be both resource-dependent and also green? If so, recent research suggests that region would look a lot like BC

The BC economy is highly dependent on natural  resources. They make up four fifths of our merchandise exports and account for roughly one in eight dollars of our total GDP. And now a string of new reports is praising BC for its environmental sustainability, suggesting that resource activity and sustainability can in fact coexist.

The first report is the BC government’s climate action update. It outlines BC’s current success in meeting emission-reduction targets and lays out some possibilities for what might be coming next.

And if you’re skeptical of governments telling you they’ve done a good job (as you should be), consider that none other than the Pembina Institute (a Calgary-based environmental group) went out of their way to praise BC’s carbon accomplishments.

Horne dutifully points out that BC’s ability to meet its emission targets relies fairly heavily in investing in offsets, of which he raises some concerns, and that BC will need stronger rules if we’re going to meet future emission targets. Yet he emphasizes that these challenges should not detract from what’s been achieved, writing that, “the province’s past accomplishments on climate change are something to be proud of.”

More praise for the carbon tax

The next piece that grabbed my attention was an op-ed published last week in the Globe and Mail, provocatively titled “The shocking truth about B.C.’s carbon tax: It works.”

The crux of the article is that BC has managed to reduce its carbon emissions without harming economic growth, largely thanks to its carbon tax. As evidence, the authors state that BC has reduced its use of fuels covered by the tax by 16 percent since the tax was introduced in 2008. Canada as a whole has increased its use of these fuels by three percent in the same time period. Meanwhile, BC’s economy has slightly outperformed the Canadian economy since 2008.

Check out this chart comparing BC and Canadian fuel use before and after the carbon tax: 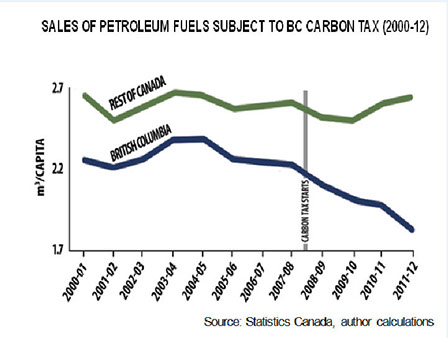 These figures are an update to a more detailed study co-written by Elgie last year through the University of Ottawa’s Sustainable Prosperity group. It’s available here.

And BC can brag about more than just its carbon tax, considering that the province scored the top spot in Canada in Corporate Knights’ annual ranking of green regions.

The ranking uses measures in a range of environmental areas, including energy use, garbage, air quality, water use, vehicle use and more. And when all the scores were tallied, BC emerged as number one among Canadian provinces.

Here’s how we did in each area relative to nine other provinces:

Fifth in waste avoidance (GDP per kilotonne of waste)

Seventh in water use (in litres used per person per day)

Still more to do

One important thing to point out is that our work in developing sustainable economic growth isn’t over. The BC government’s Climate Action report concludes with a list of actions that may be necessary if BC is to meet its long-term emission targets. These include things like improving transportation systems, boosting energy efficiency in buildings, improving waste-management systems and practices, and developing clean industries and technologies.

Similarly, while the Corporate Knights ranking puts BC in the top spot, it highlights where we can still do better. For instance, BC ranks below most other provinces in terms of air pollution and water use, a clear sign that we have more work to do.

That said, BC clearly has some green accomplishments worth celebrating. It helps confirm the idea that we can have economic development ‒ even when driven by natural resources ‒ and also be good stewards of the environment. Even if BC has not fully realized that dream yet, we’re arguably off to a good start.