BC to lead Canada’s economic growth. How did this happen?

Solid performance across the province, including a healthy boost from natural resources, gives strength and stability

For everyone in BC who is tired of depressing economic news, here’s a nice treat. New numbers from Statistics Canada show BC’s economy is doing alright, and analysts are predicting these nice conditions will last.

I use the terms “alright” and “nice” purposefully. We’re certainly not in runaway boom times here. Our situation is more slow, steady and dependable. We’re in a sort of cozy-sweater economy rather than a sports-car economy.

The latest news describes the year that was: 2014. This was before the collapse of oil prices and the resulting upheaval in Canada’s provincial economic stories. So the 2014 data still show Alberta leading the pack with 4.4 percent economic growth over the year. As analysts at BMO point out, this story has already largely collapsed due to the widely reported fallout from dropping oil prices.

However, the story’s quite different for 2014’s second-best-performing province. British Columbia pulled off a better than average economic performance, growing at 2.7 percent, relative to Canada’s overall growth of 2.4 percent. And what’s more, BC’s broad-based growth means that we’re likely to see this trend continue into the next few years, according to BMO, likely resulting in BC leading Canada’s economic growth for the first time in a decade.

Making the most of a diverse resource economy

So what explains BC’s enviable situation? The short answer is that our diverse economy is performing well overall, thanks in big part to a significant boost from natural resources. 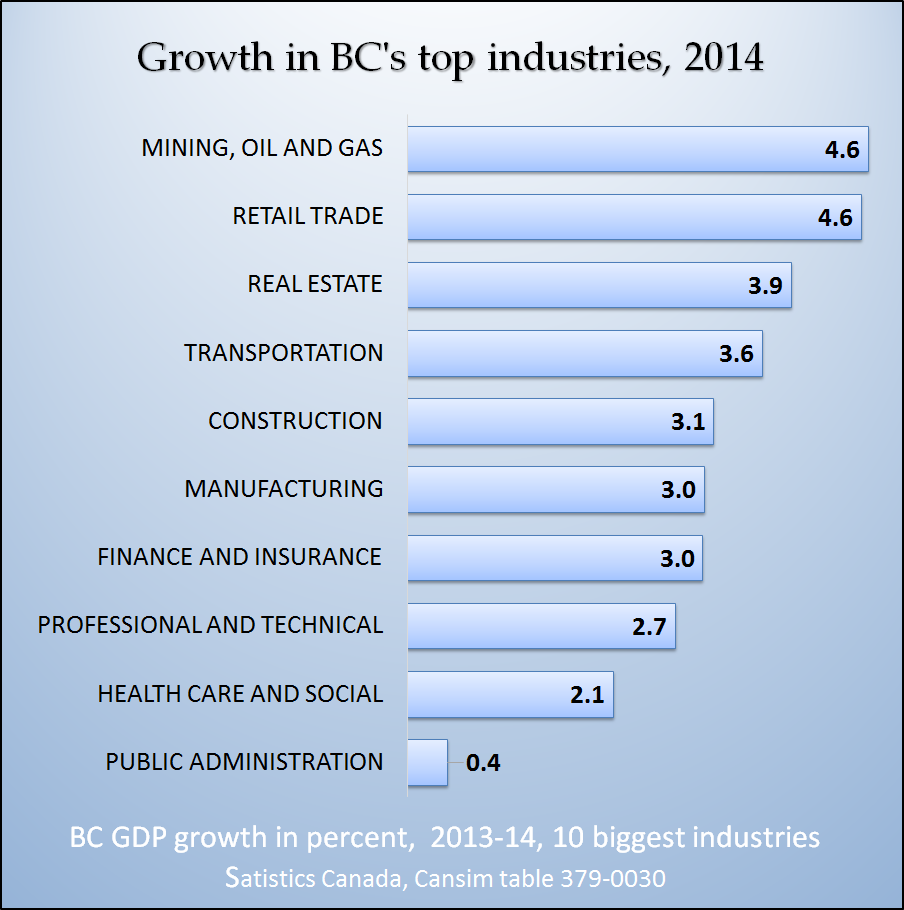 The high impact of resource activities

The fact that resources are taking a leading role in BC’s economic growth is good news on a couple of fronts. First off, many of BC’s highest-paid jobs are in the resource sector. According to Statistics Canada, the mining and oil and gas industries pay BC’s highest average weekly wages. The average wage in these industries is more than $1,700 a week, which is almost double the average wage in the province as a whole, which is about $870 per week.

And as I’ve touched on before, resources play a crucial role in BC’s trade with other regions, making up about 80 per cent of our total commodity exports. Growth in our export-oriented industries helps us bring in everything we need in BC that we don’t produce ourselves.

Being thankful for a diversified economy

And yet, as we look across the border to Alberta, we should remember to be grateful that our economy is not overly dependent on natural resources - or, more accurately, a single natural resource. The fact that BC’s economic growth is broadly based is a blessing, and it’s a major reason why we can expect our current comfortable economic conditions to last.

Let’s not forget, however, that our resource economy plays a crucial role in this diversity.