Why think-tank rates BC highly

Canada’s resource sector has a strong influence on the country's overall economic performance, according to a new study by the Conference Board of Canada, one of the country’s most influential think-tanks.

The study assigned letter grades to 10 Canadian provinces and 16 developed countries based on a broad range of economic issues. Canada’s most resource-rich provinces were at the top of the class, with Alberta, Saskatchewan and Newfoundland boasting the three overall A+ scores. Their extraordinary economic performances are almost entirely explained by the success of their resource sectors.

BC, which scored an overall B, has a more complex story. We did well in some areas and poorly in others. But, as with the rest of Canada, our overall economic story is largely determined by our resource sector.

Here’s a quick overview of how BC performed on each of the study’s eight economic issues.

BC’s had the fourth-largest GDP growth in Canada after the big three performers (Alberta, Saskatchewan and Newfoundland) in 2013. With 2.0 percent growth, BC ranked just above the Canadian average of 1.9 percent, and significantly above other countries such as the US (1.7), the UK (1.4) and Germany (0.5). 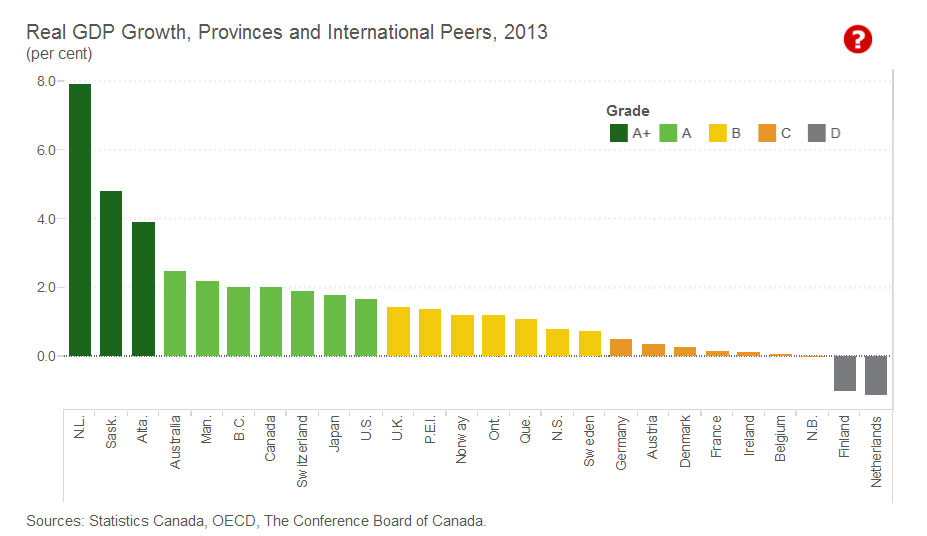 BC’s unemployment rate seems to be … fine. The province is in the high middle of the pack with an unemployment rate of 6.6 percent in 2013. This is notably lower than the Canadian average of 7.1 percent, but a full two points higher than top-performing Alberta and Saskatchewan. 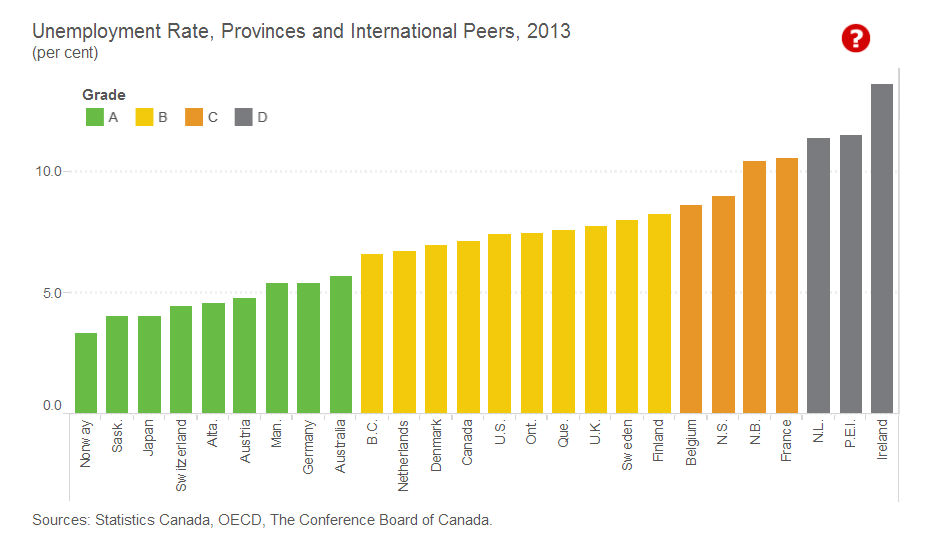 Here is a key issue where BC did particularly badly. In 2013, the province experienced negative employment growth (at -0.2 percent), compared to a Canadian score of 1.3 percent growth.

This gives BC, as the authors note, “the dubious distinction of being in the same group as some of the troubled eurozone countries.” Ouch.

BC’s poor marks in job-creation are largely explained by troubles in its forestry sector, which took big hits from a slowing US housing market and a mountain pine beetle infestation. However, the report’s authors expect that the forest industry will turn around as US lumber demand increases. 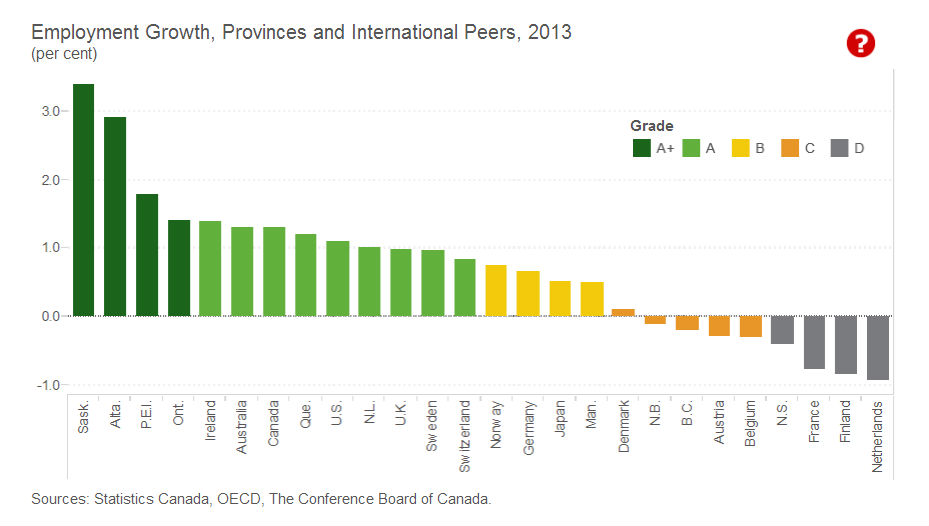 BC’s record on income per person is decidedly mediocre. The province ranks fifth out of the 10 provinces, with an income per capita of $36,323, lower than Canada’s $37,459. (The study used per-person income based on 2005 US-dollar purchasing power.) 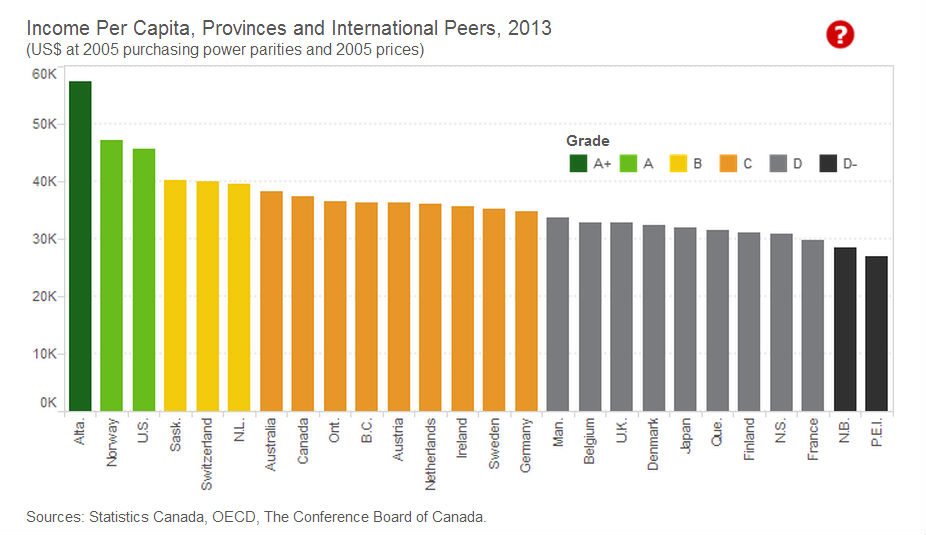 The study’s authors describe labour productivity as “the single most important determinant of a country’s prosperity over the longer term.” It describes how much GDP is generated for each hour of work. A positive growth figure means the region is becoming more productive and will be able to support a higher standard of living.

Historically, Canada has had a fairly dismal record on productivity compared to other countries. BC’s productivity growth (at 0.87 percent) at least comes in above Canada’s score (0.65 percent), but the province still lags far behind the top performers. 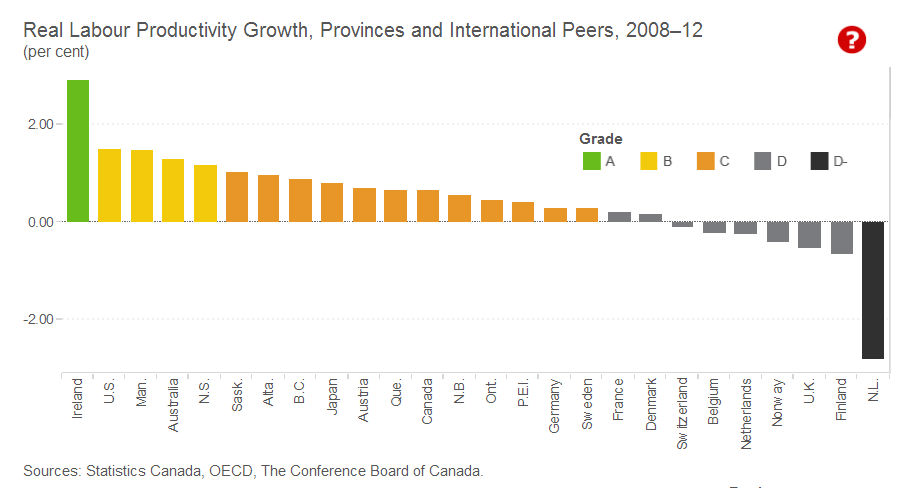 The Conference Board included a score on inflation to account for overall economic stability. The top performers had rates of inflation that were not too high and not too low. This is based on the rationale that economies are unstable if the goods people buy either go up in price or down in price too quickly.

BC’s relatively low score is a bit of a historical accident. It is based largely on the fact that overall prices for goods went down when the BC government reversed the HST. So while BC still gets a C on this issue, it does not mean that the BC economy is being destabilized due to runaway inflation or deflation. 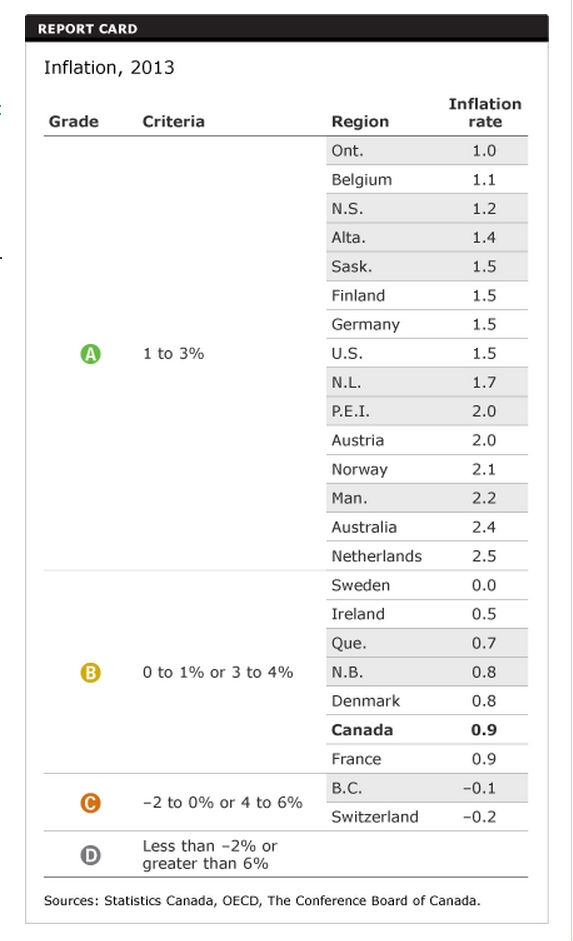 This study included measures of both inward and outward foreign investment. In each case, the stats measure direct investments in activities that either expand businesses or create new ones; mergers and acquisitions are not counted.

The stats suggest BC was not a particularly attractive place for foreign investors in 2013, with the study’s authors explaining that the province attracted less investment than expected for its size. 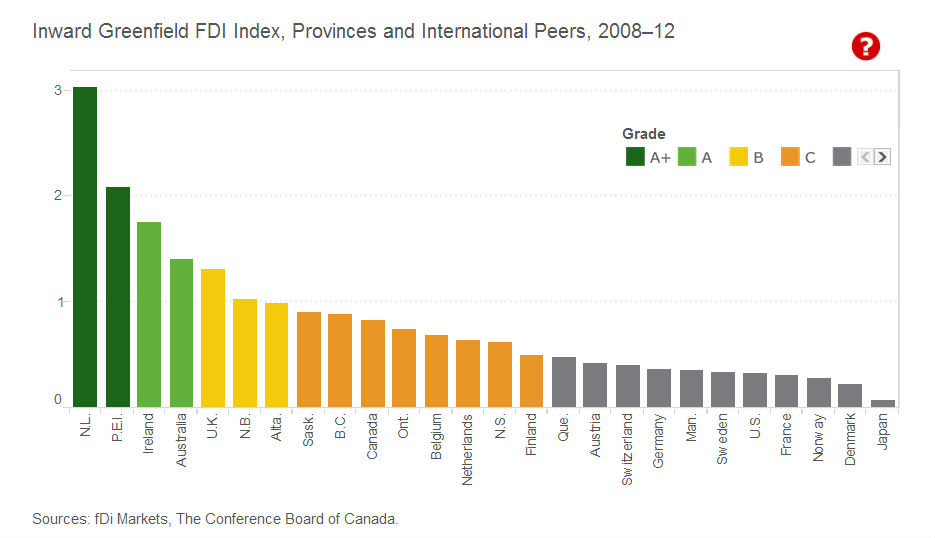 On the other hand, boy were we good at investing in other countries. In fact, the only regions to outdo BC on this metric were two small, trade-dependent European countries, Switzerland and Ireland.

BC’s outward investment is somewhat difficult to explain; however, it appear to have a lot to do with the province’s natural-resource sector. The study’s authors start by explaining that Canada’s total level of foreign investments has grown substantially in the areas of mining and oil and gas extractions. It stands to reason that much of this activity is being driven by firms in BC (with its hub of mining companies) and in Alberta (ditto for energy). 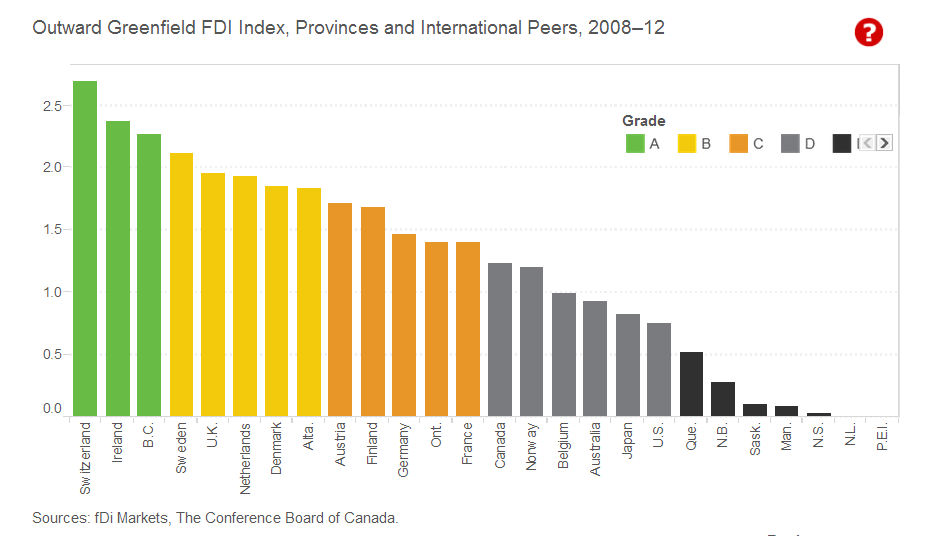 Peter Severinson is the Director of Research of Resource Works.

Images courtesy of the Conference Board of Canada