In the bank’s recent provincial outlook report it predicts healthy GDP growth rates of 2.1 percent in 2014 and 2.8 percent in 2015. That’s slightly above the expected rate of growth for Canada as a whole in 2015, which is 2.7 percent. 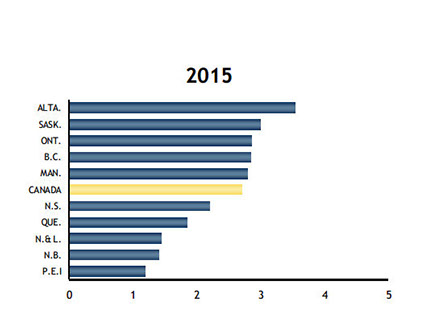 Emphasis on trade and resources

Bumping up BC’s economic growth is external trade, fuelled largely by the province's natural resources. BC has had some ups and down on this front so far in 2014. A 28-day port strike in March slowed down our exports; however, an unusually cold winter in the US boosted sales of BC electricity and natural gas early in the year.

RBC expects BC’s trade with both the US and China will increase over the next year. In particular, the US is expected to start building a lot more houses, which bodes well for the BC forestry sector.

This means, of course, that natural resources will play a major role in fuelling economic growth in BC.

The economists at RBC carefully avoid putting too much emphasis on the impact of LNG at this early stage, writing that the industry faces a “long (and possibly windy) road ahead." That said, there is a chance that one or more of BC”s LNG front runners will announce final investment decisions in 2015, leading to some significant LNG-related spending that year. The truly large investments, however, aren’t expected until later years.onsidering that nearly four fifths of our commodity exports are natural-resource products.