What's this - a big city mayor who wants to put Canadians first?

Toronto Mayor John Tory says he's not a fan of making homeowners pay for vexatious litigation against fuel companies. In doing so, he sent a message about Canadian unity. 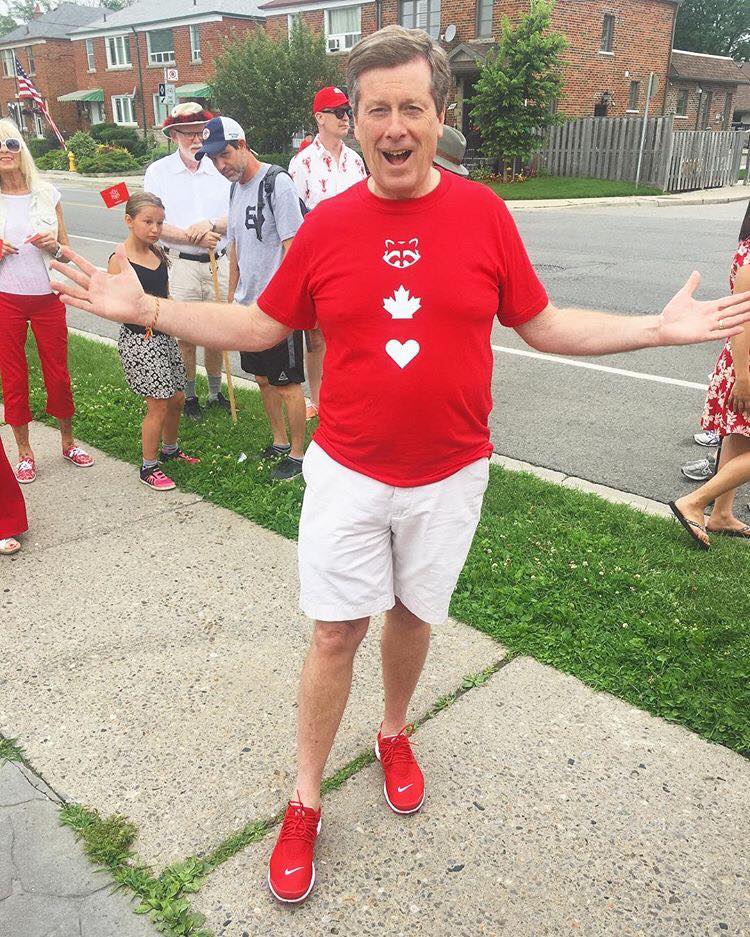 While his counterpart in Vancouver is so dead-set against made-in-Canada prosperity that he has tried to block a federally approved energy pipeline, Toronto's John Tory wears his patriotism on his sleeve.

And, judging by this photo, the rest of his wardrobe as well.

Mayor Tory made news for telling the proponents of a made-in-the-USA "climate litigation" campaign that he's not enthusiastic about their idea.

The campaign calls for the City to launch costly lawsuits against oil companies claiming it's the companies' fault that consumers use gasoline. (CBC News coverage here.)

Tory made it clear he'd rather focus on things the City government can actually do to make a difference.

“I don’t favour the city of Toronto becoming involved in lawsuits against oil companies," he said. "I don’t think those kinds of lawsuits advance the protection of the environment."

According to Calgary journalist Rick Bell, Tory said a lot of emissions are not created by oil companies but by others, including those who drive their cars to work every day. (He's right.) Said Tory: “Are we going to start suing everybody? You can’t very well call out one industry that provides the fuel and then drive your car around and think that somehow there is no connection between the people who provide the fuel for the car and the people who drive the cars or make them.”

Tory got right to the heart of the matter with this analysis of the climate litigation campaign: “Usually, when you have these kinds of lawsuits the only beneficiaries are the lawyers and perhaps those involved in political theatre.”

“I’m against that,” said Tory, adding such lawsuits are also “ineffective.”

The campaign has gained some traction in British Columbia where a number of municipal councils have signed on without giving any thought to alternatives. In this March 29, 2019 column in the Toronto Sun, Resource Works' very own Stewart Muir lifted the veil on the issue for Central Canadian readers.

Tory went out of his way to reassure westerners that most Toronto residents actually do have an appreciation for the region that because of its export strength pays for the Canadian way of life.

“Alberta and Albertans are hurting right now and I would hope we could find ways to be of support," he told Bell. “I think most people here are Canadians first, they really are.

“The city of Toronto and its people and its businesses have benefited immensely from being partners with Alberta in our country. There are lots of people who are working here in the city of Toronto or in its surrounding area that owe a big part of their secure employment to the fact we do business with the province of Alberta.”