Sometimes an image comes along that seems to encapsulate a moment in time – an iconic photo like an exuberant couple kissing on VJ-Day in Times Square, or a politician fumbling a football on the campaign trail. Stewart Muir looks at one interesting picture. 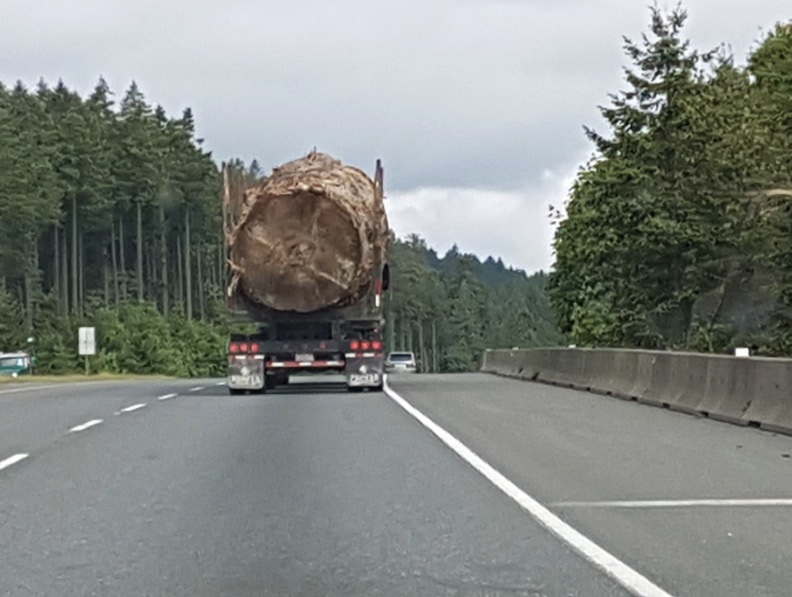 The story behind the story

To a great many social media users, Wednesday's viral photo showed a logging truck on a road near Nanaimo carrying a massive log had an immediate visceral effect.

“Barbaric!” commented one tweet, echoing a sentiment seen in many others.

Given the ongoing forestry blockade going on elsewhere on southern Vancouver Island, the gut reaction was: "Look at this, this is what we're talking about!" And held up as implicit proof that something is wrong with logging practices in British Columbia.

Having covered forestry extensively as a B.C. journalist and editor over the past four decades, including supervising coverage of the topic at a daily newspaper where the country's only reporter assigned exclusively to the forestry beat was a direct report of mine, I have to admit I had a similar gut reaction when I first spotted the image.

The next thing that happened was that my professional habit of asking questions kicked in. Once my head took over, an interesting story emerges. Admittedly, having the facts about the picture could challenge the first impressions that many people had.

Is it a real image?

Yes. Lots of people immediately asked the question - was it photoshopped, was it taken where and when the poster said it was. In this case, I have no issues with the photo as its veracity checks out to my satisfaction.

Why was the tree harvested?

This is a pretty basic question that drew an enormous amount of speculation. If you based your answer on what was said in social media, you are probably assuming right now that the tubby cigar-smoking banker from your Monopoly set, or one of the Marvel villains, is behind it. News reports on May 27 indicate the tree was harvested in the summer of 2020.

The fact that one image of one tree, a Sitka spruce, is being talked about so much is evidence that this is not the norm but the exception. The person who took the photo and posted it to Facebook, Lorna Beecroft, related that she has experience in the log handling business and believed this is a highly exceptional instance: "I have never honestly in my life seen a tree that big on a truck ever," she told The Tyee's Andrew MacLeod.

How old is this tree?

In the favourable coastal growing conditions we have in British Columbia, just because a tree is large doesn't mean it is especially old nor, for that matter, rare or threatened.

For the Sitka spruce, size does not always matter it when it comes to age. It is a fast-growing tree species in its preferred moist growing conditions. The oldest Sitka spruce in the world is 440 centimetres across at breast height and is estimated to be 350 to 400 years old. The Nanaimo specimen's size can be guesstimated based on the truck "bunk" that it rests on in the highway photo, which is a standard dimension of 2.62 metres. Since it fits inside the bunk, it can't be any greater than 262 centimetres across.

This specimen might be more than 250 years old, in which case it would fall into the category of coastal "old growth". But it might be aged well under the old-growth limit. A simple mathematical comparison to the world's oldest known specimen tells me it might be only slightly more than 200 years old. Those saying it is definitively old (ie., most of the news reports I've seen) are not offering any proof such as count of tree rings so that description is conjectural at this stage.

The mystery could easily be solved if a qualified person simply examines the tree.

From Vancouver Island. Before being moved on the truck, it was at a log yard. We do need to remind ourselves that this image is just a snapshot. With no access to discuss with it with the professional forester, the logger or a chance to review the harvest plans that undoubtedly would have been associated with the cutting of this tree, there is a lot we don't know about the log.

Where is it being taken to?

My sources indicate it is going to a mill in Port Alberni that makes components for musical instruments requiring "tonewood" – a term for resonant wood that has unique qualities appreciated by musicians. This is about as a high a value as could be imagined for a log. Those who believe that adding more value to domestic wood, instead of shipping it somewhere else, will be supportive of this kind of approach.

It was obvious that a lot of social media commenters think that specialty logs like this one are used to make toilet paper or two by fours. If anyone thinks so, they are dead wrong because this log might be scuffed up but it is quite valuable and nobody in their right mind would allow it to be diverted to less valuable uses.

Sitka spruce doesn't grow just anywhere, yet it is needed everywhere there are musical instruments, sailboats, light aircraft and fine cabinetmakers. Its special qualities – silky, supple, and resonant – are legendary and spoken of in hushed terms by the cognoscenti as if they are talking about a rare gem. Only British Columbia and Alaska produce Sitka spruce of the highest quality. (Here's a summary of its properties.)

All around Vancouver Island and the Lower Mainland, specialists known as custom cutters are part of a supply and manufacturing value chain that meticulously sources timber and connects it with mills and ultimately end customers. (Here's an article that explains a little about this fascinating niche.) Whenever I've spoken with individuals in this part of the forest industry, I've found them to be thoughtful, resourceful and exquisitely sensitive to the ecological aspects of wood sourcing, just as one would expect to discover in those who want to have a steady long-term business.

A large log like this, especially if it's sound and not rotten inside, could be used to make anything up to Steinway pianos. In this case, it will be used to manufacture guitar tops. Although a number of outraged social media celebrities vented their disgust at the photo, it wouldn't surprise me in the least if these same people have an aesthetic appreciation of music created by instruments made from Sitka spruce.

Is this going to be exported as a raw log?

No. Most definitely not. I know that at least one "concerned young activist" is insisting this is the case and getting thousands and thousands people engaging, stating: "Most trees logged in BC are shipped overseas as raw logs." This is a wild falsehood. When you consider that many of those blocking approved forest operations also make statements like this, it's increasingly obvious that the protests have little to do with facts. (Side note: the fact that the RCMP are investigating an incident where the brake lines of an industrial ambulance were cut, it has to be remembered that some of these protesters think that their opinions warrant criminal, potentially lethal, actions.)

In fact, British Columbia has regulations affecting raw log exports, and these have been amplified under the BC NDP making it uneconomic to export raw logs. Also, there is a large, complex industry, situated all around British Columbia but especially on the south coast, whereby value is added to timber from the time it is in the woods until end products wind up in the hands of customers in Canada and around the world. Nothing goes to waste, not even the sawdust. Furthermore, based on its size, this log would likely be considered of a quality labeled as “high grade”, of which, if it came from provincial Crown land (but again we do not know), there is a log export policy that prohibits exporting of high grade spruce (and for most other strategically important species).

Is there something wrong with the log being transported as shown?

No log or lumber that moves around British Columbia lawfully is outside of a chain of custody created from the time that a tree is identified for removal until it reaches its final customer. The timber mark stamped on the log would provide a wealth of data to the trained eye. Where some commenters are implying or stating that illegal or illicit activity is captured in the photo, they have not provided any evidence for the claim.

Doing this the wrong way would seriously imperil the businesses of everyone involved so it would be a very foolish thing to try.

No, it's from north Vancouver Island.

Some pressure groups are claiming that there is not supposed to be any logging of old trees because of a recent report. Is this true?

No. The recent old growth review panel report did not say there should be total moratorium on old growth logging. It stated: "Until a new strategy is implemented, defer development in old forests where ecosystems are at very high and near-term risk of irreversible biodiversity loss."

Deferrals in fact were made by the B.C. government by mid-September 2020, well within its promised six-month window to act. The fact that the government chose to consult with the civil service on where to defer forest activity, rather than simply adopt the urgings of anti-forestry lobbyists, does not mean that deferrals did not take place. Also, that statement has often been interpreted much more broadly than intended to cover all old growth forests no matter whether or not there are long term loss risks.

For a source that carefully fact checks the various claims, check out this recent Resource Works report.

Didn't the BC government campaign on banning old growth logging?

No. Here is what The Tyee's Andrew MacLeod tweeted about that question: "For clarity, since it's much misquoted, from the BC NDP 2020 platform: 'In collaboration with Indigenous leaders, labour, industry, and environmental groups, we will implement recommendations of the Old Growth Strategic Review to protect further old-growth stands.'"

Based on statements made by the government, including the forests minister, that process is underway.

The idea that the government should only consult with environmental pressure groups, which is what the Fairy Creek blockaders are demanding, is selfish and makes little sense. First Nations, local governments, industry and workers should not be sidelined. Nor should First Nations wishes be ignored if their members are not 100% aligned on an issue that leadership supports, which is what some pressure group spokespeople are demanding.

Recently there were some welcome regulatory changes on big trees, providing a baseline for discussions about whether particular trees should or should not be cut, and that is significant progress.

As most residents of BC know, being a world leader in forestry like British Columbia also shores up our status as a climate leader. With 83% of British Columbia's forests certified as sustainably managed, when the world needs wood whether for pianos, renewable building materials or face masks, where better to get it from? Trees, regardless of their size or life stage, lock up carbon in wood products, and in their place hundreds of millions of new trees are planted every year to suck up carbon dioxide. With plenty of protected old growth forests like we have today, correct forest practices mean we can keep up this circular, sustainable economy long into the future while also maintaining a good quality of life for residents.