Brittania Mine: rebuild it, and they will come

In the early days, it was difficult to distinguish the BC Museum of Mining  from the abandoned Howe Sound copper operation that was closed for good in 1974 after the richest reserves had been extracted. Fast forward four decades and the century-old site is set to become a high-tech tourist attraction

Britannia began production in 1904, its workforce derived from a vibrant company town. In its heyday before the Second World War, the Howe Sound mining operation was the largest copper producer in the British Commonwealth, and a renowned innovator in mining technology. By the early 1970s, however, the richest reserves had been mined and the mine fell prey to cost pressures and a competitive international commodity market.

When the mine closed for good in 1974, a local historical society took custody of a challenging opportunity. Many of the windows in the old mine’s imposing 20-storey mill building shattered from age and weather, and the old wooden buildings soon looked forgotten. The most talked-about legacy was an ongoing source of acid mine drainage into Howe Sound. Hundreds of kilograms of heavy metals were escaping from the old site each day.

When Kirsten Clausen arrived as managing curator in 2000, many friends and acquaintances wondered why. Although its mill had been had been designated a National Historic Site in 1988, Britannia was struggling for financial support.

Redevelopment of the property, despite its long history and spectacular setting, had been hobbled by the acid mine controversy. Not long after Clausen’s arrival, the province of British Columbia reached a $30 million settlement with the former owners of the mine.

Researchers with University of B.C. and Golder Associates engineered a solution to restrict acid mine drainage to a single stream, and a treatment plant was constructed with ongoing operations financed by the province. As a result, the flow of contaminated water into Howe Sound ceased and eventually salmon came back.

With an historic icon they could rally behind, B.C. mining companies opened their chequebooks, as did the provincial and federal governments. In 2007, each of 14,160 panes of glass in the mill was hand-puttied in place. Clausen, now executive director, set about overseeing a $14.7 million project to transform the site.

Now rebranded as the Britannia Mine Museum, it celebrates its 110th birthday this year.

Recently the museum embarked on a new round of fundraising, targeting $4 million for an immersive new special effects show inside the mill that will complement Britannia’s other primary attraction — an underground train that takes visitors deep into the one of the mine’s many tunnels for a slice of life for a miner in the early 20th century.

The mill show will show what life was like for workers in the old mill amid the dust and thunder of rock crushing.

“Screens will go up and down, seats will shake. They will ‘feel’ the building shake, they will sense and smell the air changing as it gets dustier from the crushing of the rock. They will notice the light changing. It will be loud. 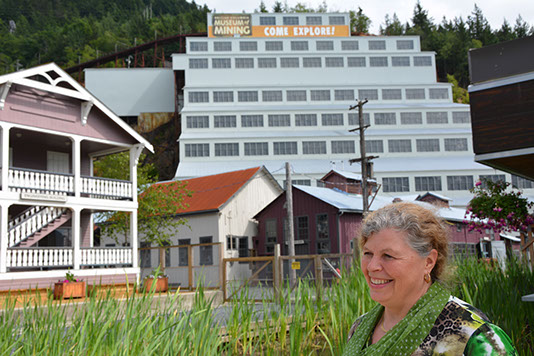 “If all things go as hoped, we will open it around this time next year.”

Attractions such as the tunnel ride and mill show will help boost attendance but Clausen emphasized that a primary aspiration of the museum is to tell the stories of the people who lived in the Britannia company town.

“Over and over and over again, people like stories about people. Britannia, if nothing else, has so many stories and people who did amazing things, who faced challenges.”

She noted robust discussions currently underway in B.C. about resource development, and thinks the museum can be part of that conversation — not through advocacy, but by providing a thoughtful environment where mine activity and mine development can be comfortably discussed.

“Given the scale of the Britannia Mining Museum, its location close to Vancouver city centre and proximity to Lower Mainland tourists, we have a real opportunity to be a partner in telling that story,” Clausen said. “Our immediate community is talking in real terms, asking the question: ‘What is this thing called resources, and how do we wrestle with it?’

“We can be part of that conversation. That’s where I think the Britannia Mining Museum and its industry partner have some real opportunity.”

From 1981 to 2013 Scott Simpson was an award-winning reporter/columnist/editor at The Vancouver Sun, including a 10-year stint on the energy and mining beats.