Building a better life on the banks of the Fraser River

Neither profession, you could say, has anything at all to do with British Columbia’s natural resources sector except for one detail: It’s Begg’s job at the Acorn sawmill, on the banks of the Fraser River east of the Alex Fraser Bridge, that provided the income needed to pay for their education. 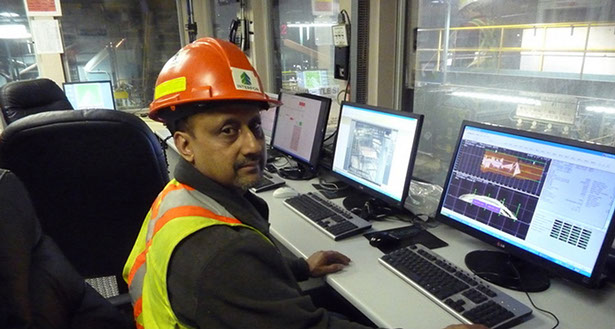 “If I didn’t work for this mill, I wouldn't have accomplished as much as I have. Especially sending my children to university. It costs a lot of money. For my son, we basically said, ‘Just study and we will pay for everything.’

“I owe this place a lot. It has given them professional careers.”

Hasrat is the charge hand, an hourly employee with responsibility for mill operations, at the Acorn mill, one of five British Columbia sawmills owned by Vancouver-based Interfor.

Begg started working at Acorn 34 years ago as a labourer and worked his way up to the top unionized job at the mill. Today, he spends much of his day in the mill’s control centre, a room full of computers where sophisticated scanners flash images on monitors showing the optimum cuts needed to extract maximum value from each log. It’s high-tech work.

For mill manager Randy Chadney, there is nothing unusual about Begg’s story. The mill is one of the handful of remaining Lower Mainland sawmills that have provided family-supporting jobs for generations along the Fraser River. The Acorn mill, which specializes in cutting lumber for the Japanese market, does not meet the stereotype of a sawmill spitting out huge volumes of two-by-fours. The sophisticated machinery at Acorn is used to convert logs from the old-growth forests of the B.C. Coast into high-valued products that are likely to be used in constructing post-and-beam housing in Japan, or made into windows, and door frames that go into high-end Vancouver homes. Even the clear-grained moulding you might buy from Home Depot to finish your living room likely came from the mill, or one like it along the Fraser.

Chadney is himself a product of B.C.’s resource communities. His father was an RCMP officer, his mother a nurse; they worked in resource towns around the province, raising their family in communities from Dawson Creek to Kelowna. Chadney went to UBC’s department of forestry where he graduated with a bachelor’s degree in wood sciences. 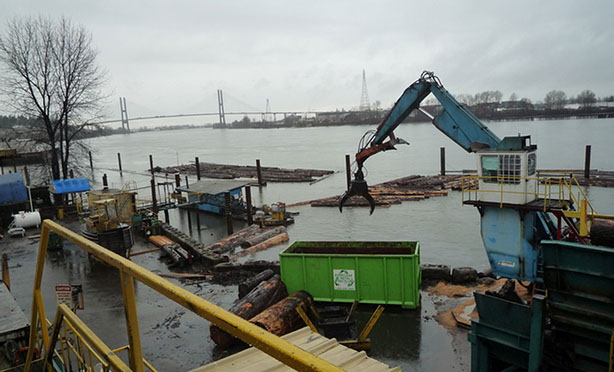 The mill that he manages is part of a chain that begins in the coastal rainforest and ends in a Japanese home or a European window frame. From the time the timber harvest is first planned – up to three years before the log is actually made into lumber – until it is delivered to a customer, the focus is on value.

The story begins on a remote inlet or island, likely within the Great Bear Rainforest. Under a recently signed agreement between forest companies and environmental organizations, harvest levels have been set low enough to ensure when the loggers leave that an intact eco-system remains. The agreement, reached after more than a decade of negotiating, awaits ratification by the B.C. government and Coastal First Nations, who are increasingly moving into the logging sector.

Even the camp, where loggers, engineers, biologists, the team involved in determining what is cut and from where, leaves a footprint light as a line drawn on water. It’s a mobile floating hotel, a self-contained barge, that could have anywhere from seven to 55 rooms.

It’s a sign of how much forestry on the B.C. Coast has changed, said Andrew Meyer, operations manager for Interfor.

When the crew has finished harvesting, they will pack up their floating camp and be gone, leaving little trace that a logging camp was ever there.

It’s all about maintaining the social licence to harvest timber, something that B.C. forest companies have proven to be world leaders in accomplishing, said Meyer. 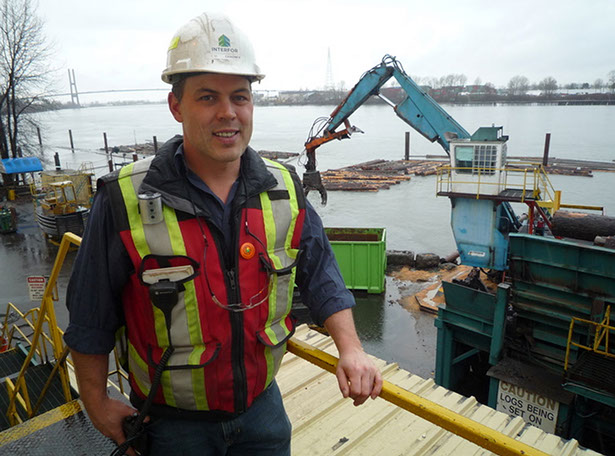 “Mobility is important to our success,” he said.

Meyer is a forest engineer who loves his work. He lives in the Vancouver Island city of Courtenay. He is married and has two sons. The eldest is at the University of Victoria, studying mechanical engineering; the youngest is still in high school at home. Meyer enjoys all the amenities of urban life at home, but when he is out of the office, he is often in the wildest parts of the province.

“I’ve been able to take my family to parts of B.C. very few people get a chance to see.”

At Interfor’s Campbell River office, Meyer is part of a team of 77 employees. Add the spin-off jobs each office job creates – three for every primary forest industry job according to the United Steelworkers Union – and the impact is significant.

The forest industry also supports manufacturing on the island, he said, noting that in Campbell River T-Mar Industries, a design, engineering and manufacturing company, builds and services some of the heavy equipment used by the contractors.

Meyer said that forestry involves so many people, from office staff to the actual loggers, because of the time scale involved in getting the wood from the forest to the market.

Planning the harvest probably began two years before the actual loggers arrive. It begins by determining where logging is going to take place within a forest company’s chart area, based on the restraints contained in higher-level plans.

"Then engineers go out into the field in a chart area and figure out where it would be logical to put roads, where, based on those roads, the boundaries for the blocks would be,” Meyer said.

“That, as you can imagine, takes a bit of time, but the whole idea is to build a plan that you can show to the stakeholders and explain what measures are going to be put in place that address the issues that that particular cut block brings to the table.”

Stakeholders who have a say include First Nations, local residents, lodge owners concerned about loss of view, and government agencies.

“The Coast is about value,” Chadney said. “We always focus on quality. We will take the mill down right away if there is an issue about quality.”.

To maintain the quality, the logs are sawn more slowly. It’s the sawmilling equivalent of the slow food movement. It is more costly, Chadney said, but the value is in the final product when it is sold in Japan, so it is worth it.

Gordon Hamilton is an award-winning writer and freelance journalist specializing in the resources sector. Much of his career was spent at The Vancouver Sun, where, from 1993 to 2013, he was the forestry reporter, writing about the politics, environmental clashes and social issues surrounding resource use. He tells his stories through the people whose lives are touched by our resource economy.

All photos by Gordon Hamilton.