'Canada has to compete harder than ever to sell its resources'

The key message to emerge from an energy forum is that the country is at a crossroads: where once we supplied only one customer, now we’re trying to supply the world. It’s a big transition, and it won’t be easy

The forum was put on by PwC in Calgary at the end of May, and a report on the its key messages was made available recently. A lot of what’s in here will be familiar to anyone who’s followed Canadian resource issues for a while, but if you’re new to this topic, it’s a great introduction to some of Canada’s biggest energy challenges.

We’re missing out by not selling to world markets

What’s true for Alberta oil is also true for BC natural gas: we’re selling the stuff cheap right now. And the reason is simple: there’s a greater demand for energy products in Asia than in the US, which means they are willing to pay more.

Check out this dramatic chart on different natural-gas prices: the top line is for Japan and the bottom line is for the US. No wonder Canadian energy companies want to sell in Asia rather than in North America. 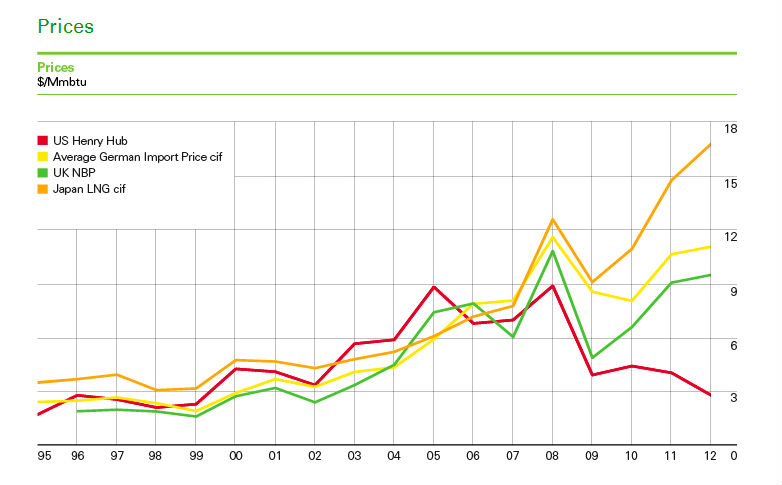 Image from BC Statistical Review of Energy

And the demand for gas is growing. For instance, world trade for liquefied natural gas has tripled since 1997 according to the PwC report, to more than 30 billion cubic feet per day. Luckily for Canada, we have a lot of natural gas to sell: some 640 trillion cubic feet of the stuff - 90 percent of which is locked away in so-called unconventional deposits.

We’re a high-cost place to work, but we’re worth it

Unfortunately for Canada, there’s a lot standing in the way of our product and our most lucrative potential customers. Our natural resources are located across vast territories, far from oceans, and in remote and often inhospitable northern climates. This makes our energy products expensive to extract, process and transport. There are many places in the world where it’s easier to access underground resources than here.

But Canada has some big advantages other countries don’t: we have a strong ability to attract the investment needed to start big projects, we are very good at applying technology to unlock difficult-to-reach resources, and we’re well-respected around the globe as a stable, rules-based society. So, on the whole, there’s still a lot of reason for companies to do business in Canada.

We can attract investment, but it’s getting harder

And if we’re going to sell energy resources, we certainly need private companies to stay interested. It takes an enormous amount of money and patience to build major resource projects, which means Canada needs to attract a lot of investment money to make these things happen.

On the whole, that story is a relatively happy one, according to the PwC report. Overall direct investment from other countries has more than doubled in Canada between 2010 and 2013, reaching $64 billion. However, investors have a lot more choices about what to do with their money today than they used to.

Since the 2008 recession, developing countries have been attracting more and more investment, increasing the competition for dollars. Investors also have a lot of choice when it comes to things like the LNG market: they can choose to put their money behind not only Canadian projects but American, Australian and African ones too.

Investors also have some reasons to be cautious about backing Canadian projects due to concerns over our supply of labour, relations with First Nations communities and environment-related public opposition to energy projects.

What industry and government need to do

To overcome these challenges, the PwC report offers some broad recommendations to both industry and government.

Industry needs to do more to improve its operations if it is going to offset the high cost of producing energy products in Canada. This means making business administration more efficient, improving human-resource management and using more new technologies and innovative practices in their operations. Governments need to continue pursuing trade agreements in new markets and do more to help industry secure the social licence they need to operate.

It’s a tough world out there, but it’s full of opportunities

Overall, the forum ends on a high note. Transforming Canada’s energy sector from a US-focused system into a global supplier will be difficult. And as the world changes, we have to compete with more and more countries to capture those big foreign opportunities.

This is a tough transition, and we’re already deep in many of its struggles. But it can be done, and in a lot of ways, we’re already well on our way to making the changes we need to.