It’s quite a contradiction. Canada is relying more and more on trade with Asia, but people are less and less convinced that it matters

British Columbians, on the other hand – thanks perhaps to our position on the Pacific coast – still view Asia as highly important in terms of economic prosperity, suggesting that the rest of the country might be able to learn something from our attitudes.

Those are some of the key findings from a recent Asia Pacific Foundation poll measuring the attitudes of Canadians about Asia. The survey was conducted by Angus Reid, included 3,487 participants (for a margin of error is +/- 1.7% for the full sample), and it is the 10th such annual poll conducted by the foundation.

The big story of Canada-Asia trade

Let’s start with the reality before we move on to opinion. Canada’s trade with Asia has ramped up significantly in the last 10 years. Here’s a look at Canada’s top five export destinations, not including the US. (The US still dwarfs all other countries, accounting for 76 percent of all Canadian exports). Note that three of these top five countries are in Asia, and our exports to them are all increasing. 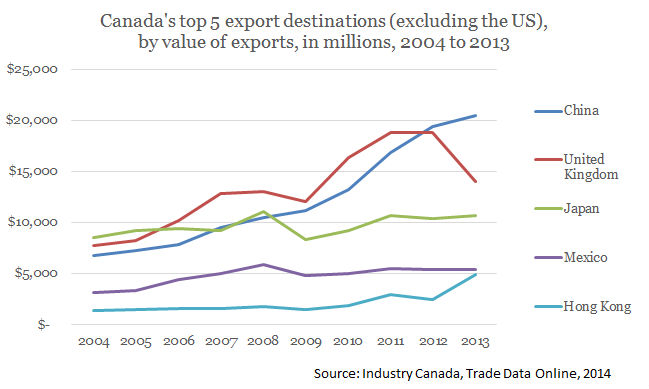 If we look at the same numbers for BC, we get an even more dramatic story. All of our top five export destinations (excluding the US, which is still number one by a long shot) are Asian countries. The spectacular growth in trade with China means that this country now buys 20 percent of all BC’s merchandise exports. 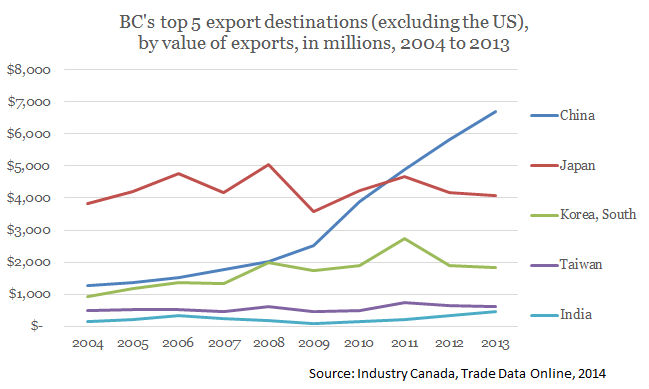 And these numbers only reflect what’s happening right now. The potential future opportunities of selling more goods to Asia (particularly energy products) is a whole other story.

And yet Canadians are losing interest

Despite this reality, it seems that Canadians are becoming less and less interested in increasing economic ties with Asia. Here are a few excerpts from the Asia Pacific Foundation survey.

This first chart shows that Canadians are becoming less convinced that Asia is important to their prosperity, with 46 percent of Canadians agreeing to this statement, down from 61 percent in 2012. British Columbians, however, buck the Canadian trends, with about three quarters of people agreeing that they consider Asia important for prosperity. 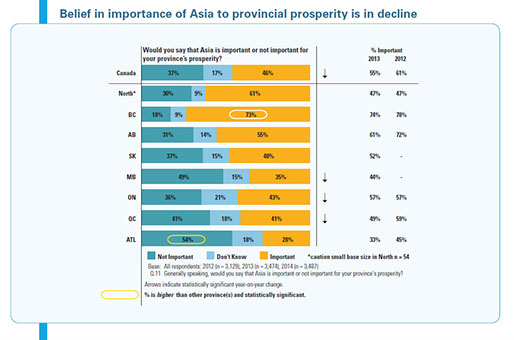 Canadians have also become more convinced that the rising economic power of India and China poses a threat rather than an opportunity. 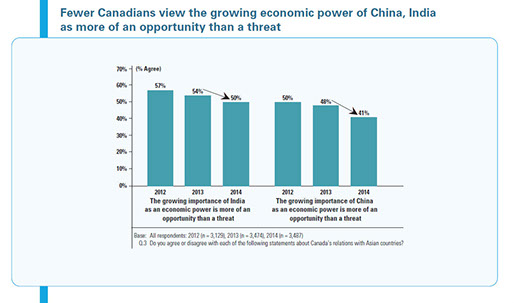 And finally, there’s been a dramatic decline in the proportion of Canadians who feel developing ties with Asia should be our country’s top foreign policy priority. 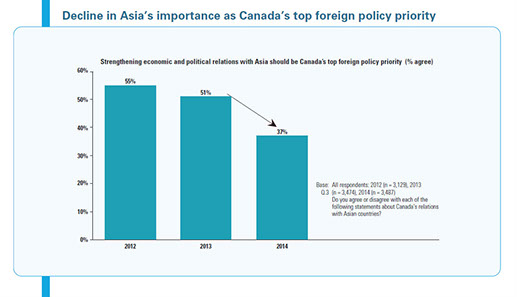 What explains the declines?

There are a number of issues that appear to make Canadians nervous when it comes to building closer ties with Asia. Here’s a snapshot of some of the big issues: 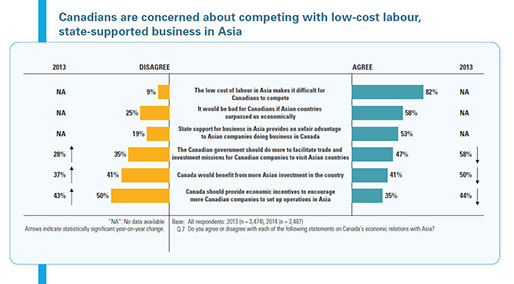 The survey shows that Canadians are concerned about competing against cheap Asian labour and against companies that rely on state support. Canadians still support trade and investment missions to Asia, although less so than before, and not if it includes incentives to Canadian businesses. Meanwhile, Asian investments in Canada are viewed with suspicion, with an even split between Canadians who think they’d benefit from them and those who don’t.

An important finding from the survey is that not all Canadians are becoming less enthused about trade with Asia. It turns out that most of the declining attitudes are due to changing opinions among older Canadians. Attitudes of younger Canadians were relatively stable compared to past years’ surveys. 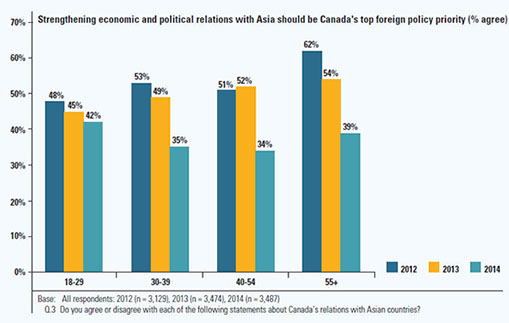 What Canada can learn from BC

While no one should panic over the results of a single survey, the findings here are troubling. Asia is clearly becoming an important part of Canada’s economic development, and yet people are becoming less enthusiastic about partnerships across the Pacific. BC is an exception, however. We rely more heavily on Asia for our economic development and we seem to realize it. As trade with Asia becomes more important for the country as a whole, hopefully national attitudes will align more closely with those on the west coast.

If they don't, we could run into problems. As the survey authors note, “Canadian hesitation to engage with Asia is likely to be costly.” They suggest that these attitudes pose risks to Canada’s economic growth and diversification and our ability to influence decisions in Asia.  And so there is a compelling reason to keep talking about the exciting developing economies of Asia and what they mean for Canada’s economic development.

Peter Severinson is the Research Director for Resource Works