Economists provide their top charts for 2018

Here are seven charts that touch on trends in Canada's natural resource future. They are drawn from Maclean's magazine in its annual Chartapalooza feature looking at the biggest economic trends for the coming year. 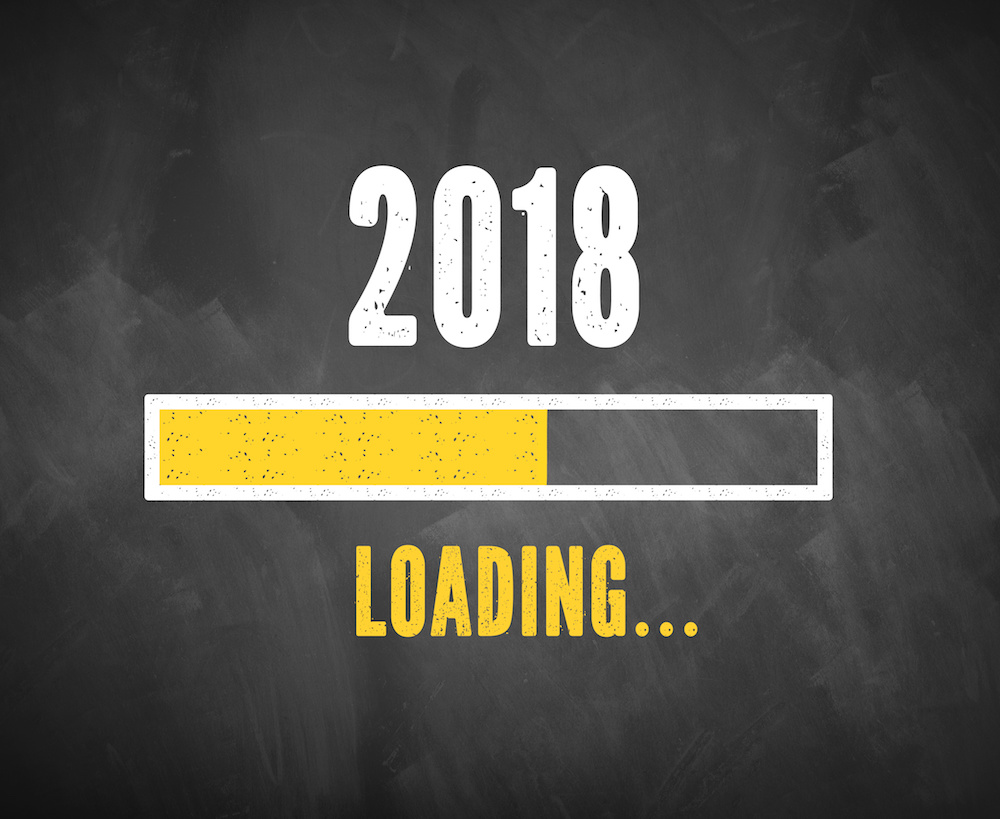 Maclean's shared 91 charts this year that appeal to the inner wonk in all of us. From that bumper crop, here are seven that point to specific concerns about the health of the resource economy and its future prospects.

Canada is having serious trouble drawing investors to its shores. With recent setbacks in securing nation-building energy infrastructure, it may be little wonder. The author writes: "Business investment in Canada lags the OECD; Canada is less than half Korea. When businesses invest in the latest technologies and production techniques, and expand operations, they spur economic growth and make workers more productive, enabling those workers to command higher incomes and enjoy better living standards. It has not helped that we have pursued policies that increase uncertainty and the cost of doing business. These policies include increased corporate income taxes and new carbon-pricing schemes and regulations." 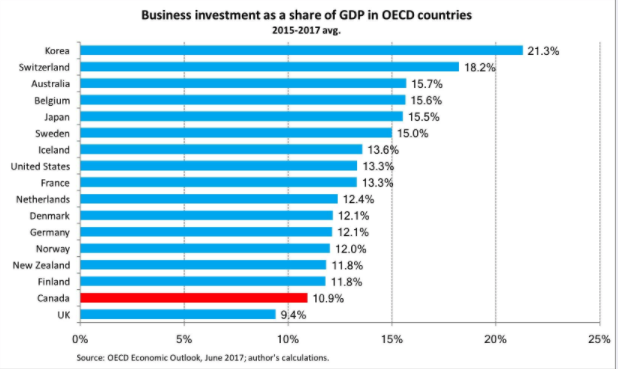 2. An older population has implications

With a smaller proportion of working-age citizens, how is Canada to pay the bills  that inevitably accompany an aging population? Without investments of the type that spur trade and draw foreign exchange, this is a serious issue. Milligan writes: "The population share of Canadians age 75 and over drives health spending, and this share is set to increase by 60 per cent by 2032 and double over the next 25 years. Moreover, the growth in the age 75 and over population share will be much faster and stronger in some provinces. These facts will begin to put immense pressure on provincial budgets starting in the life of the next federal Parliament. Can our fiscal federation evolve to manage this challenge?" 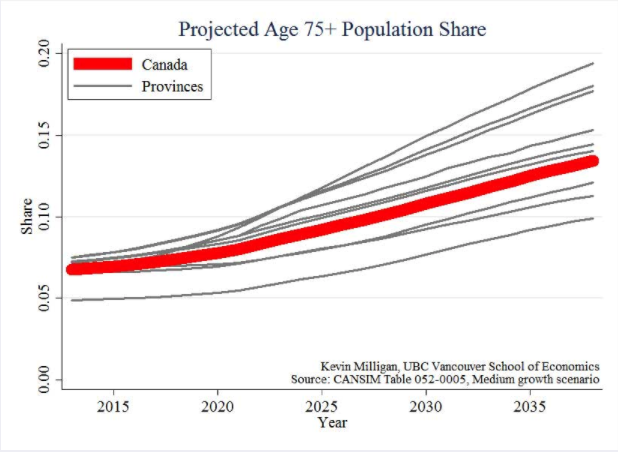 3. The 'grey tsunami' represents a bigger threat than the financial crisis

This way of coming at the same problem as above may be even more alarming. Health care is the largest expense in the Province of British Columbia's budget and it is forecast to surpass $20 billion in 2019/20. Says Lee: "The grey tsunami will transform EVERYTHING in our society—in ways never experienced before in human history. It will reduce annual economic growth, reduce taxation revenues, transform health care, housing and transportation systems and transform our provincial governments." 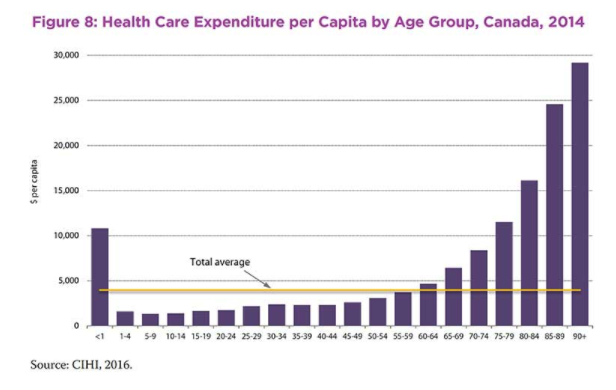 The baby boom era saw 15-year-olds outnumber 65-year-olds by nearly 3.5 to 1. Today, the older set outnumbers the 15-year-olds. If the productivity of working age Canadians does not increase, living standards can only go down, and the most powerful tool we have to fight this trend is to grow our most productive industries, which are in natural resources. Writes Kirby: "The slow growth we've endured since the Great Recession is also largely due to the realities of a greying workforce that is working, and consuming, less. Regardless of the uptick in growth we've seen of late, this demographic reality suggests that 2018 will bring more lacklustre growth that even the biggest fuelled infrastructure stimulus plan will struggle to overcome." 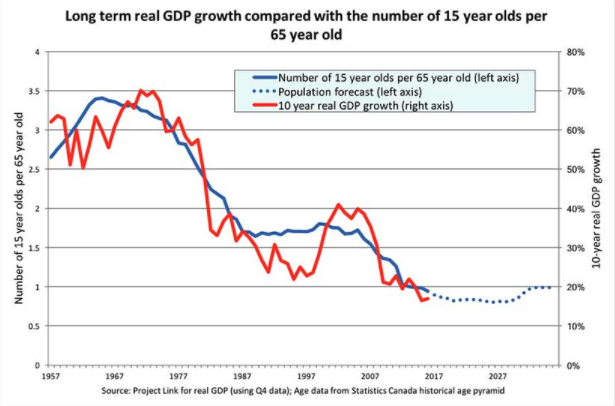 5. The importance of a pipeline to tidewater becomes ever more apparent

If Canadians aren't tired yet of subsidizing American crude oil consumption, this chart might change their minds. However, it's a  technical topic that takes close attention to understand. Writes Leach: "I chose a bitumen differential chart again this year. We’ve seen multi-year highs in the discount faced by Alberta in the last couple of weeks and, with pipeline constraints here and in the U.S. not likely to abate any time soon, the situation is only going to get worse. This has big implications in Alberta, where the province is increasingly dependent on bitumen royalties which rise and fall with the value of bitumen, which does not always follow the headline price of crude. In fact, since mid-September, Brent crude is up more than CAD$10 per barrel, while the value of bitumen in Alberta has stayed flat. The higher the differential, the greater will be the pressure on the pipeline file and, and with U.S. market discounts to global markets growing again, the importance of a pipeline to tidewater becomes ever more apparent. Even with roaring 6+ per cent GDP real growth projected for Alberta this quarter, a return to the days of the bitumen bubble might spoil the party in Alberta." 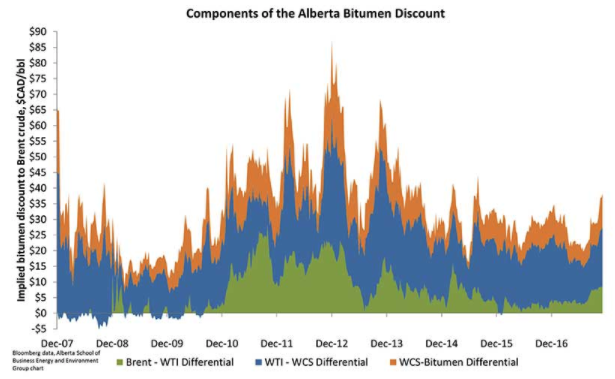 Global oil consumption is going up, not down, and that has a lot of meaning for Canada. Writes Roach: "This rather unassuming line chart depicts the single most important trend affecting Alberta’s economy and Canada’s oil industry. The estimates vary, but most reputable projections show the global consumption of oil increasing over the next few decades. This is the case even when the rapid adoption of electric cars and efforts to curb carbon emissions are taken into account. The line rises because population growth and rising standards of living in the developing world overwhelm the effects of electric cars and current public policies." 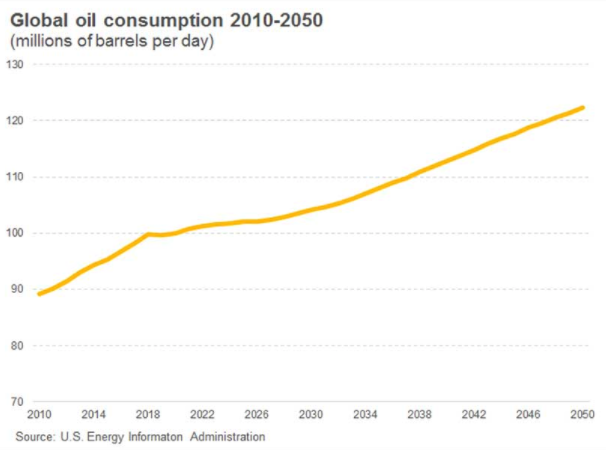 We hear daily concerns about the effect of burning fossil fuels, yet judging by their actions Canadians are not paying attention. Writes Carson: "Truck sales are booming in Canada, outselling cars by a 2:1 ratio. Consumers may enjoy hearing about electric cars and the low-carbon economy, but when it comes to actual personal action the picture is very different. There is no better illustration of this phenomenon than this chart...Transportation makes up roughly 23 per cent of Canada's emissions, with passenger vehicles accounting for half of that. Achieving Canada's Paris Agreement target of a 30 per cent reduction of emissions from 2005 levels by 2030 is made more difficult with every new light truck that drives off the lot." 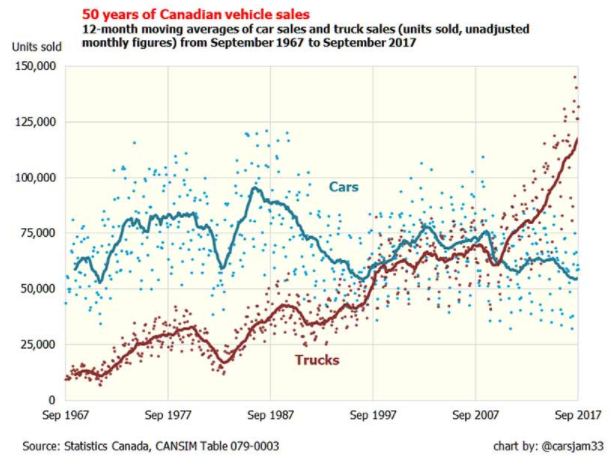 Thanks Maclean's for this insightful annual feature.