Another shipload of Canadian heavy oil sails for China

Despite some myths, crude oil from the Alberta oil sands has a ready market across the Pacific, writes Stewart Muir.

It's a persistent myth: Canadian heavy oil from the tar sands is "inferior" and nobody is going to buy it, so what do we need an expanded Trans Mountain pipeline for?

Abundant evidence (the latest of which I'll share further below) continues to fly in the face of this. Yet it persists.

Here's the most recent example I've seen, from a June 28, 2019 blog post on the Greenpeace website, entitled A Day in the Life of a Greenpeace Volunteer. The text relates how a group of Greenpeace members attended a Vancouver council meeting calling for climate litigation measures to try to get money from oil and gas companies for causing climate change.

Sophie Birks gave a rallying speech where she touched on how Canada’s fossil fuels (and all fossil fuels really) fuel wars where millions are killed and millions suffer. She was asked a question about the KM pipeline being a conduit to sell more oil to China instead of the US (therefore in theory not fueling as much war I suppose) and she had a wonderful answer, schooling us on how China is making strides towards converting to renewable energies more quickly than any other country and may very soon rightly turn up their noses at Canada’s dirty outdated bitumen.

As anyone following the actual fortunes of Canadian oil production is aware, Sophie's statement is wrong in every sense, bafflingly so. It would take a lot of space to deal with all of her misconceptions. The idea that Canadian bitumen oil is dirty and outdated is just ridiculous, a made-up storyline that certain groups seem intent on perpetuating no matter what the facts say. (Science blogger Blair King has been doing an effective job in challenging the myths, which seem to march regardless of the facts, like zombies in The Walking Dead. This post from June 2019 covers a lot of relevant material.)

China is adopting renewable energy just like the rest of the world, but as countless sources confirm, the country continues to grow its reliance on fossil fuels. And clearly, Canadian oil is regarded in China as being desirable. We know this because they keep buying it.

Shipping data from Marine Traffic is particularly relevant in getting at what is actually going on. It uses satellite data to plot the exact position and identity of ships so that you can see, in real time, what they are up to. Marine Traffic has allowed me to spot and track numerous oil tanker ships carrying crude oil from Vancouver to China, and in so doing blown up numerous myths.

In 2018, there was quite a spike in shipments to China. Overall, Asian heavy oil out of Vancouver was worth over $500 million last year. Most of the activity occurred in the latter half of the year. This was a real problem for the "dirty outdated bitumen" and the "renewable energy China" myths. Some critics, including BC Green leader Andrew Weaver, have recently emerged with the counternarrative that though the 2018 stats were real, they were really only a flash in the pan, caused by low commodity prices. And so we aren't going to see this repeated in 2019.

Unfortunately for those who dislike Canadian oil, a new round of disappointment is in the offing. In fact, there have already been a number of crude ships to Asia this year.

The most recent 2019 sailing was the ship STI Excellence, which is due to arrive in China on Aug. 8 with a cargo of crude oil it picked up at the Trans Mountain marine terminal in Burnaby. Marine Traffic maps show the journey.

Below: The crude oil tanker STI Excellence, surrounded by tugboats for safety, eases out of the berth at Vancouver's Westridge Marine Terminal on July 21, 2019 having taken on its load. 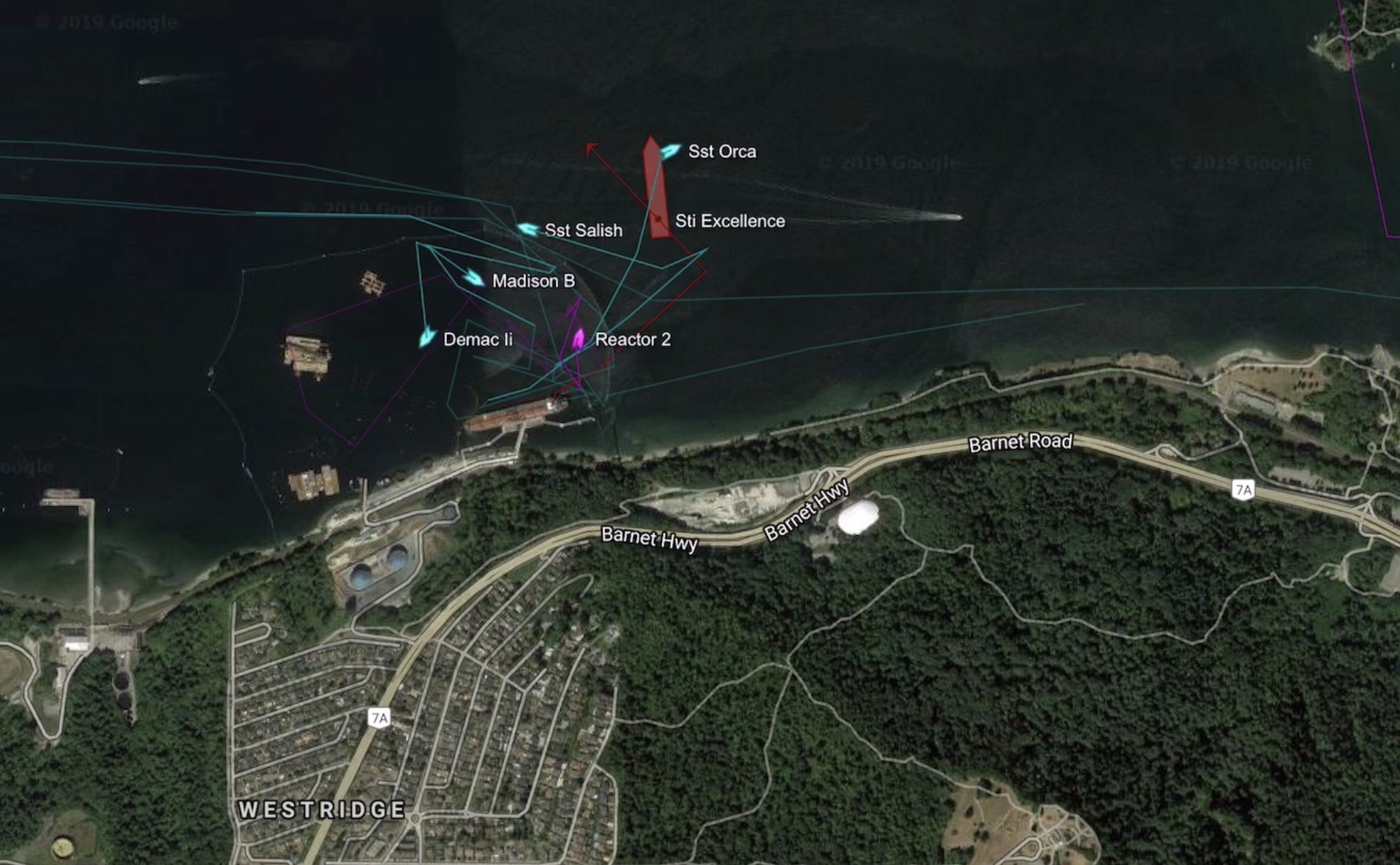 Below: By July 22, the STI Excellence has passed through the Straits of Georgie and Juan de Fuca and is making progress westward across the Pacific towards its destination: China. 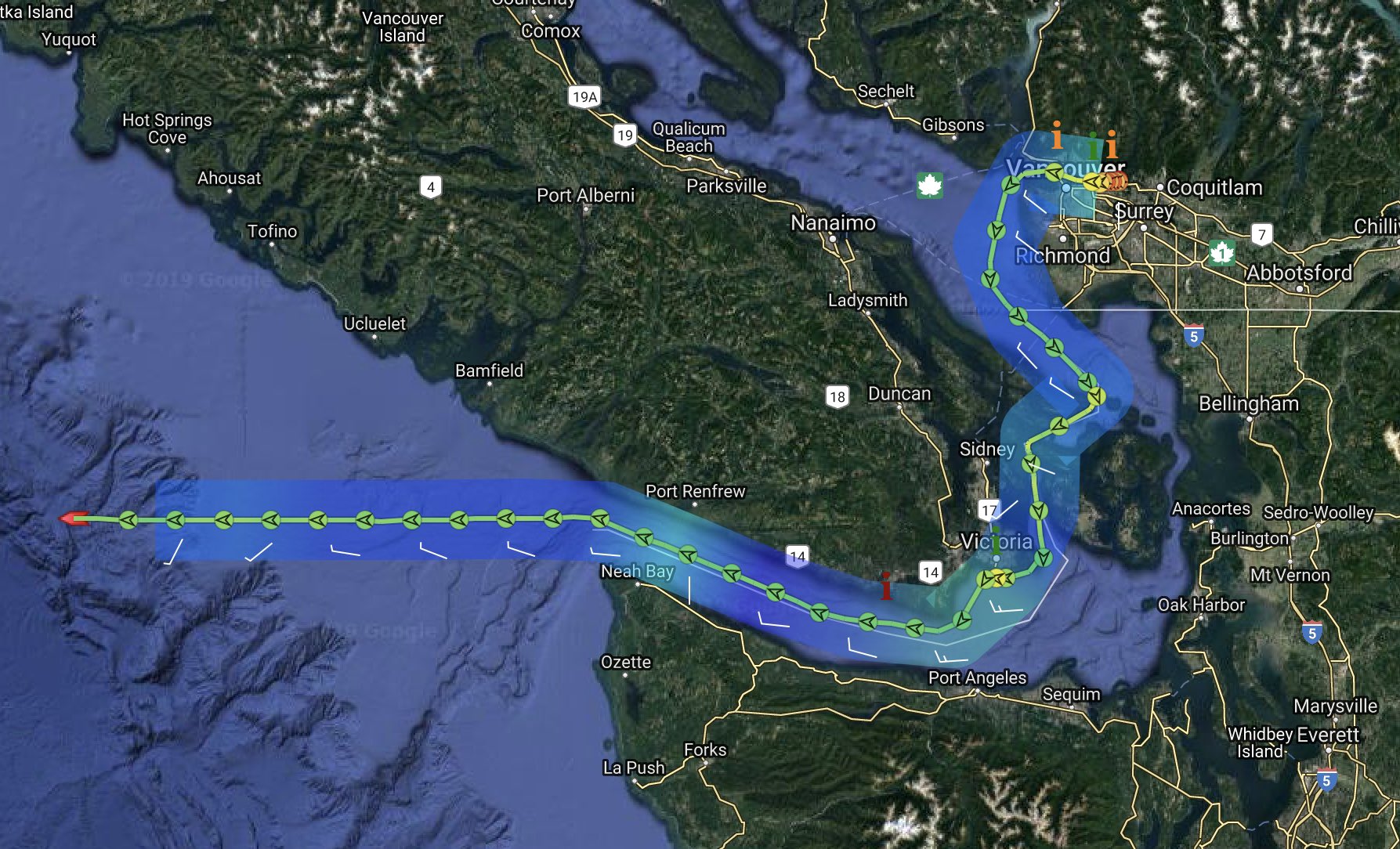 Below: STI Excellence is expected to arrive in the Chinese port of Zhoushan on Aug. 8. 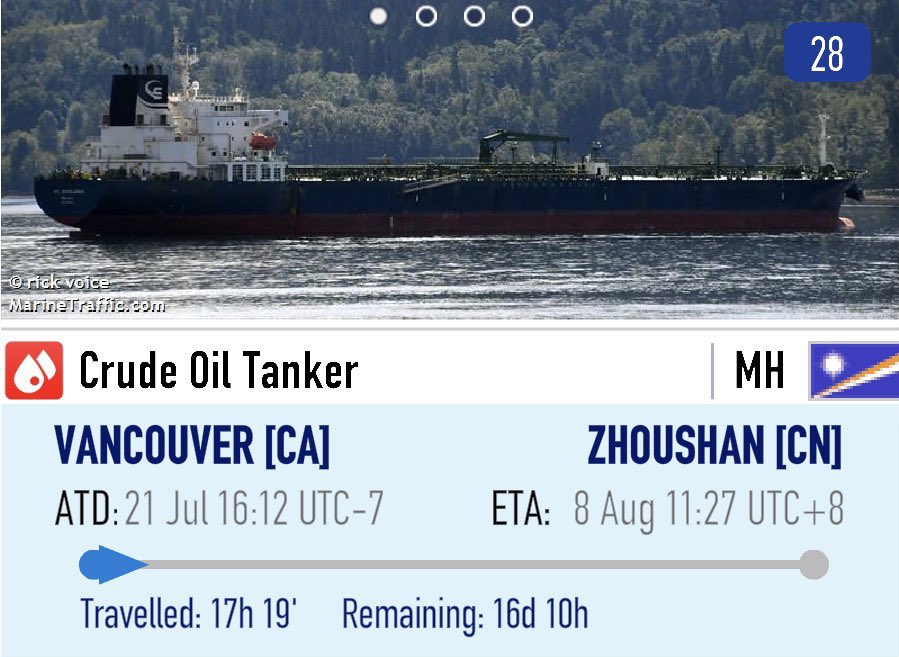 The evidence is abundantly clear: Canadian heavy oil from the oil sands is a valuable, global commodity. The July 2019 voyage of the STI Excellence proves this once again. Whether the expanded Trans Mountain pipeline ultimately supplies more or less crude oil to the United States, or to China, is beside the point. Getting landlocked oil to a Canadian seaport will erase the discount problem under which we are currently giving away a lot of this oil for less than it is worth. For the good of all Canadians, finishing the pipeline expansion is a matter of urgent national interest.