In a few days, an oil tanker ship will sail into a Chinese port and once again opposers of the Trans Mountain pipeline will be left scratching their heads. Stewart Muir asks why. 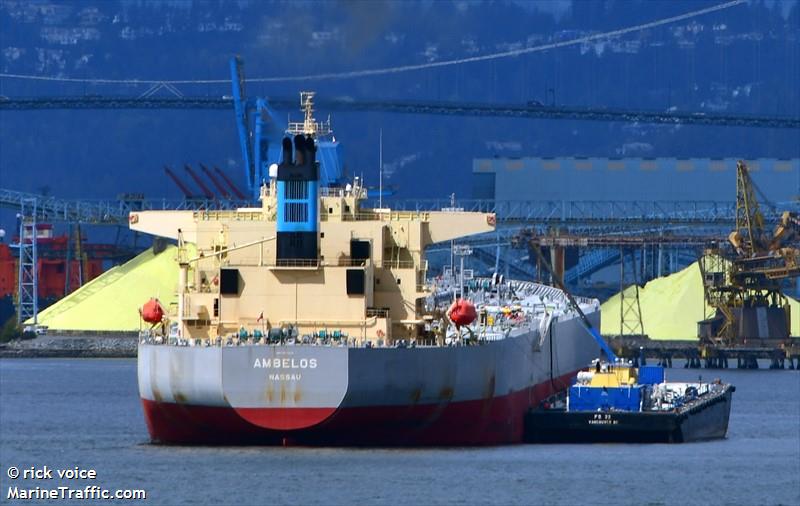 This article appeared in The Vancouver Sun on May 17, 2019. Link to the article at Sun website.

The 250-metre Ambelos left the Port of Vancouver on May 4, 2019 loaded with crude oil, in all likelihood heavy bitumen from the Alberta oil sands, making it the second ship of the year – but probably not the last – to make such a journey.

For years, we’ve been hearing pipeline skeptics say that laying down an extra pipe alongside the existing Trans Mountain conduit doesn’t make sense. Their theory is that Canadian bitumen oil is an inferior product that the wider world wouldn’t want, even if there was a way for them to get it, and the discount it suffers as a pricetaker in the American market is its just reward for being very bad tar sands oil.

New information and the voyage of the Ambelos help to explain why overseas demand for Canadian bitumen is real, it’s large, and it’s already here.

A lot of people were surprised to learn that in 2018, Westridge Marine Terminal, the Burnaby terminus of the Trans Mountain line, shipped 4.6 million barrels of bitumen to China. The value of these shipments was $335-million, according to Statistics Canada. That’s almost US$54 a barrel – well above the discount price Canada earns from U.S. buyers. The last time Vancouver supplied a significant quantity was 2015, though it amounted to only one third of the 2018 volume.

There is room to grow, but Canada remains sidelined because of its torturous path to pipeline completion. Without pipelines to tidewater we are left selling to the U.S. a lower price. While we dither, others benefit.

Venezuela under strongman Nicolás Maduro shipped more of its heavy oil sands crude (virtually identical to our bitumen) to China last month than Canada did all of last year. Eight tankers are at sea right now carrying Venezuelan oil to China.

To become more than a bit player in this story, twinning the Trans Mountain pipeline is key. That extra capacity will amount to 590,000 barrels a day. Spitballing here, but if this amount were to get to China and fetch the world price, that’s revenue for Canada of $15-to-$16-billion.

How realistic is this expectation? Very. China remains the world’s largest energy user and will account for 22 per cent of world energy consumption by 2040 according to BP’s 2019 Energy Outlook. Over the same period, its oil demand will rise by a fifth. (Does that send up climate flags for you? Thanks in part to imports of clean-burning LNG, which is also going to arrive from British Columbia’s west coast and reduce China’s use of coal, China’s carbon dioxide emissions will actually peak in 2022.)

Too many people fail to appreciate that Canada represents the good guys in the international oil & gas business. Our product is ethical, our workers are well treated, law and environmental rules followed, and Canadian families benefit directly from oil sales. But because we lack pipeline capacity, we are still forced to sell our oil at a steep discount to the United States, a nation that rejects carbon pricing and is now eagerly exporting its own oil to growing global markets.

It is high time to just get Trans Mountain built. Once it is finished, Canada will finally start to see the full benefits of being the supplier of the world’s most responsibly produced oil.