A Citizen's Guide to LNG

It was long overdue. Now here, for the first time, is a balanced study of what liquefied natural gas (LNG) projects can mean for citizens of British Columbia, with an emphasis on Sea to Sky Country 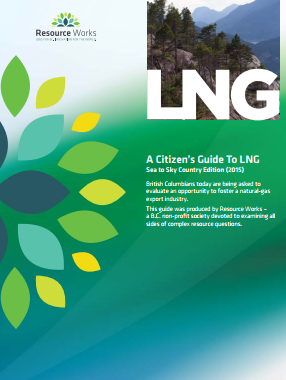 We are calling for healthy debate

LNG represents a transformative economic opportunity for British Columbia, and – as one might expect – such big developments attract their fair share of debate.

Those debates are a healthy part of socially responsible resource development, but we need to make sure that our discussions are guided by factual information that represents a true balance of risks and benefits.

With that in mind, Resource Works is presenting A Citizen’s Guide to LNG (Sea to Sky Country Edition), a resource for any British Columbian looking to navigate the ongoing conversation about what may be BC’s biggest emerging economic opportunity.

We asked many tough questions. We wanted to know what assurances exist around practices like fracking. We looked into whether LNG can be shipped without incident. And we examined, in detail, the benefits of LNG for local economies in the Sea to Sky region of British Columbia.

For citizens, there can be confusion because of all the competing interests. We found that, on the one hand, companies in the energy business can be perceived as having only the interests of their shareholders in mind. The provincial government, which relies heavily on resource royalties as a way to fund social programs, has a clear interest in wanting LNG to succeed, and of course politics is involved too.

A question of extremes

At the other extreme, groups with the sole and non-negotiable aim of stopping Canadian natural gas production, or who have some very specific local issue of their own, have not been embarrassed to use scare tactics to create and inflame public fear. Professionals telling their rather dull stories about practices and regulations are no match for high-decibel alarmist claims, and the ordinary person is left to try to sort out for themselves who is telling the truth.

In some cases such pressures can lead to better policymaking and ultimately that is good for all. But how can we judge for ourselves which claims are worthwhile and which are merely self serving?

In other words: where is the middle ground in all this?

That's where Resource Works has stepped in.

The average person wants the benefits of LNG, but fear the risks. That is who this guide is for. The Citizen's Guide to LNG (Sea to Sky Country edition) is a filtering mechanism to screen out self-interested viewpoints and present, for the first time, a truly thorough and balanced assessment of LNG from the average person's perspective.

Plans for a BC LNG industry are based on a few key economic realities: BC has ample natural gas to spare, it cannot get full value of this gas by selling to only one customer as it does now, and there are millions of people in Asia who would benefit from accessing this important resource.

Fortunately, there are proven technologies for getting BC gas supplies to Asian shores: Cool the gas down until it becomes a liquid and transport it by ship.

This opportunity is relevant to a second economic reality. As costs for major public services such as health care go up, BC needs avenues for economic growth – or British Columbians will face higher taxes or lower levels of service.

If we collectively say "no" to economic development opportunities such as LNG, we must understand that there will be consequences. If resource royalties are not available to pay for future ferry services or teachers’ salaries, the onus to pay for these benefits will inevitably fall on taxpayers.


A resource ready to move

Fortunately, there is plenty of evidence to suggest that LNG can be shipped safely off BC’s coast. Natural gas is used in about 60 percent of BC homes, it has been safely used in BC since the 1930s and gas extraction through hydraulic fracturing has been performed safely in BC for half a century. Additionally, natural gas is one of the cleanest burning fuels we have.

The upcoming Citizen’s Guide to LNG is designed to help British Columbians better understand issues like these that underlie a public debate around LNG development, including:

After publishing the first edition of the guide, we heard from people who felt it wasn't enough, that there needed to be more information especially on controversial topics like hydraulic fracturing. Future updates will reflect this desire.

We hope that this guide, in its first edition here, helps British Columbians become better engaged in a compelling discussion on BC’s most important new economic opportunity.