Are we going to get approvals for new pipelines from the federal government or are we not?

If so, the prime minister was far from making any promises.

What Alberta wants to hear is something like this: “I do get it. I understand that Canada could lose $100 billion if there are no new pipelines. So if the National Energy Board approves the TransMountain pipeline expansion and TransCanada’s Energy East pipeline, then we in cabinet will give them a green light.”

Instead, what Alberta and BC got was: “I am not going to pre-judge or shortcut the NEB process as it goes forward. It’s important that we have confidence in our regulators.”

But Western Canada is not asking him to “pre-judge or shortcut” the process. We’re asking him for a clear signal that, if the process approves the pipelines, if with conditions attached, his government will follow suit.

Natural Resources Minister Jim Carr insisted: "The prime minister's goal is to get our resources to tidewater sustainably."

But he, too, stopped well short of promising government approvals if the NEB gives thumbs-up to the pipelines.

Of course, Ottawa has spoken of adding to the NEB process some new system of consulting First Nations and other Canadians. Who knows what that involves, as Ottawa has given not a single clue as to what it has in mind or how it will work.

Saskatchewan premier Brad Wall questioned Ottawa’s new addition to the NEB pipeline process an evaluation of the “upstream” environmental impact of pipelines. (Primarily, the greenhouse gases produced to extract and process Western Canadian oil before it actually gets to a proposed pipeline.)

Wall protested on Facebook: “‘Upstream greenhouse gas’ requirements shouldn’t uniquely apply to pipelines when they don’t apply to other industries like other goods transported on rail, or the auto sector.”

And he added: “This country, with the 3rd largest oil reserves on the planet, has a much better environmental and human rights record than the other countries we are importing oil from. Let’s create the jobs right here in Canada.”

The U.S. is now is our biggest (and virtually only) customer for our oil. It takes more than 97% of it, and thus sets the price, costing us $50 million every day.

Problem is: The U.S. now is stepping up its own production of oil and is entering the world export market. That led Joe Oliver, former federal finance minister and natural resources minister, to warn:

“We risk looking foolish ourselves by failing to capitalize on our own export potential while our competitors in the Middle East, North Africa and Venezuela — and now the U.S. — capture the foreign markets we need for our own economic growth and prosperity.”

In the latest volley, the 65,000-member BC Government Employees Union signed an accord vowing to oppose pipelines from crossing the territories of 130 First Nations. Though aimed at the Northern Gateway pipeline (approved by Ottawa, but stalled) it would also cover other projects.

This despite the fact that, as Northern Gateway spokesman Ivan Giesbrecht noted, 28 First Nations have signed on as “equity partners” of the project.

(He said those nations stand to lose about $1 billion in long-term benefits if Trudeau’s proposed north-coast tanker ban kills Northern Gateway. Giesbrecht also pointed out that this pipeline is expected to generate $1.2 billion in tax revenue for BC and create more than 3,000 construction jobs and 560 long-term jobs in the province.)

Every time we hear of protests against pipelines we come back to this: There are other ways of getting our oil to tidewater. More expensive, indeed, and less palatable, perhaps, but they do exist. They are, yes, trains.

Which leads us to close our commentary today with this cartoon: 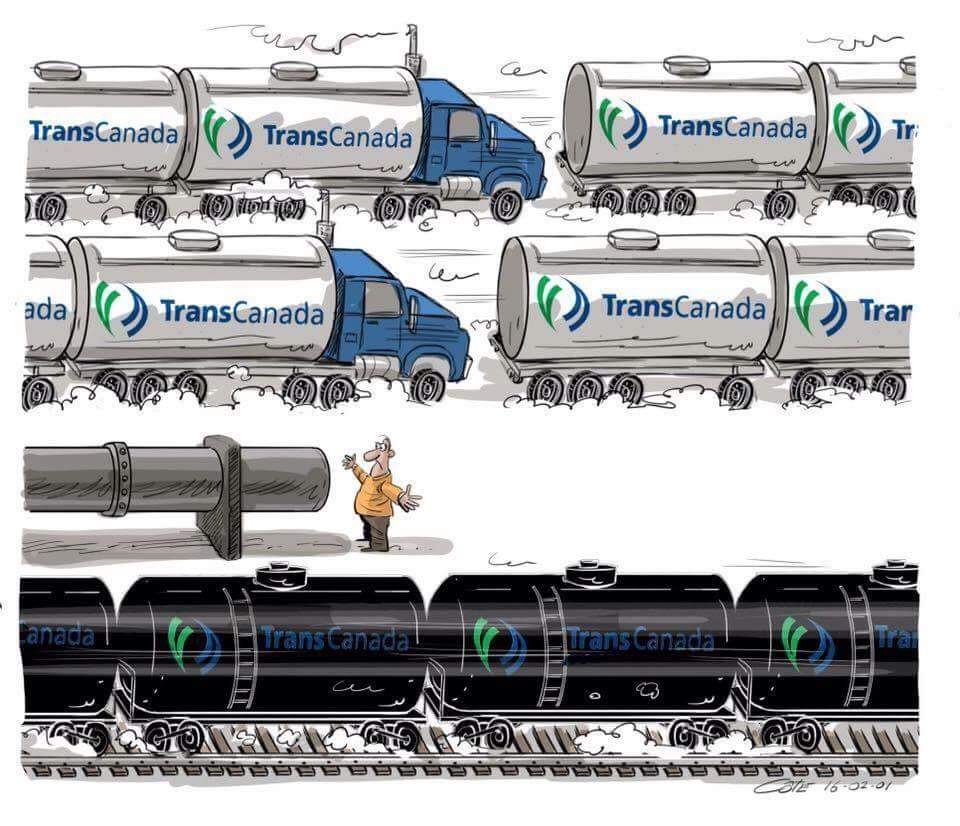