As BC reviews its natural gas royalty system, Josiah Haynes debunks the first of the top five myths about the gas that could fuel the world. 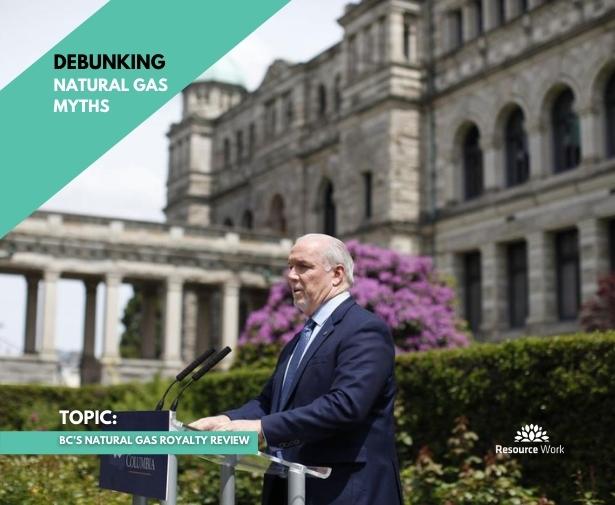 After nearly 30 years, BC is reviewing its system of natural gas royalties from fuel produced in the province, with a complete overhaul likely.

Changes could have a dramatic impact on BC and Canada as a whole. Some see it as a chance to wipe out the industry. Others see one of the greatest tools for reducing poverty in Indigenous communities, rebuilding our health system, and even playing a part as a global climate solution.

BC began its royalty review with a report from two academic experts before publishing its own “discussion paper” analyzing the situation.

According to The Narwhal, the experts agree: the system is broken. Activist outlets and lobby groups like The Narwhal and Stand.earth say that climate change is the culprit and should be the central consideration of the royalty review.

One economist from the Canadian Centre for Policy Alternatives agrees, saying the BC government should not only stop issuing new oil and gas leases but even buy back leases from companies to try to stop natural gas production. According to this commentator, royalties should be increased and tax credits abolished.

Reality: BC’s Royalty Review is about encouraging economic development and the interests of British Columbians.

Regardless of what some would like to see, BC already set three goals for the new royalty framework: economic development, a fair return to the public on the publicly-owned resource, and improved environmental protection.

In fact, neither the original report nor the discussion paper identifies climate change as the main reason the system is broken. Rather, it’s because the authors believe the royalty system fails to meet the balance between ensuring a competitive investment climate and securing a fair value for the public.

Indeed, in discussing alternatives, the discussion paper repeatedly stresses that these goals are joint: that for the public to get a fair return, BC’s natural gas sector needs to be a competitive and attractive place for investors. If the government over-taxes and over-regulates the industry, it will shrink. If that happens, the first two goals of the potential new royalty system fail: economic development will slowly grind to a halt, and the public will stop benefiting from the resource.

While climate action is a necessary consideration, both for government and industry, the report authors note that BC already has tools to mitigate climate change, including a carbon price even more ambitious (and some would say, more punitive) than the federal carbon price. That’s why they write: “When selecting a royalty framework, environmental protection will be considered in the development of incentives or other broad aspects of the framework rather than royalty structure itself.”

In other words, BC can improve environmental protection by creating incentives for companies to reduce their emissions, but increasing royalties alone neither helps fight climate change nor benefits British Columbians. And that’s to say nothing of the global emissions reductions made possible by a competitive production environment that enables LNG export to developing economies as a substitute for coal.

This article is part one of an upcoming five-piece series called "Debunking natural gas myths".

Josiah Haynes is Resource Works’ communications and research coordinator, a writer for Green Growth BC, and a passionate advocate of the power of resources to reduce poverty in Canada’s remote communities.