Do they just not care? 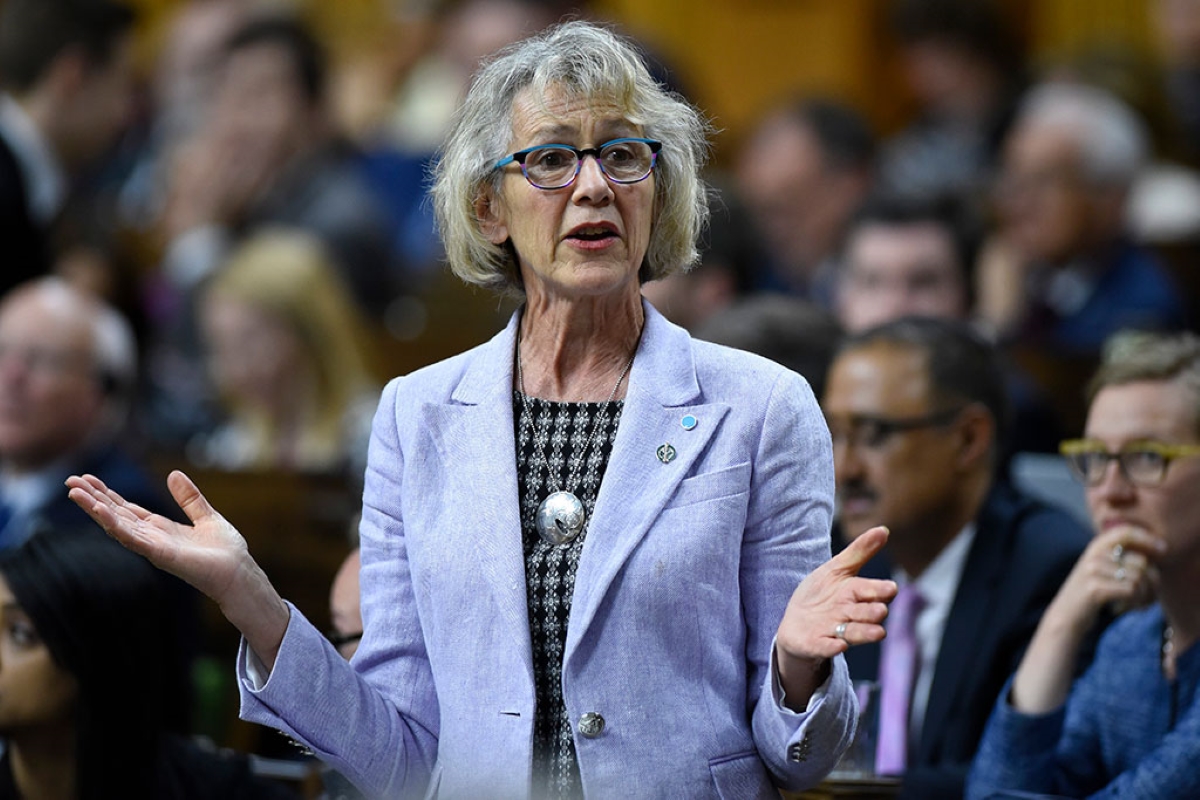 Federal Minister of the Department of Oceans and Fisheries, Joyce Murray. Photo from The Canadian Press.

The federal government recently released its discussion paper on a transition from open-net salmon farming in BC, which it has been pushing for the last several years. Salmon farming is largely regulated by permits from the Department of Fisheries and Oceans (DFO), a federal entity, meaning that decisions impacting coastal BC will be made in distant Ottawa — making local and provincial input especially important.

Yet the discussion paper suggests the DFO has already decided the end goal for salmon aquaculture. The framework's stated vision is to: "Advance innovation and growth in sustainable aquaculture in British Columbia that progressively minimizes or eliminates interactions between salmon open-net pens and wild salmon while also taking into account social, cultural and economic objectives."

This might sound reasonable to those who haven't been following this saga since the federal government's arbitrary closures of 19 salmon farms in BC's Discovery Islands. "Advancing innovation and growth in sustainable aquaculture" sounds good, and it's something that Resource Works has championed. The core issue, however, is the supposed link between interactions involving farmed salmon from open-net pens and wild salmon. Are interactions between these two groups introducing risks to the wild salmon population? It's an important question. Fortunately, it's one that has largely been answered.

Back in 2012, the Cohen Commission ("The uncertain future of Fraser River Sockeye") released its conclusions and recommendations to the federal government. The commission had been mandated to discover why wild Fraser River Sockeye salmon stocks were declining and what their long-term future might be. It found that there was no "smoking gun" that could be identified as the cause of the two-decade decline. Instead, it proposed a host of potential reasons.

Critically, the commission reads: "the state of scientific research about sockeye–fish farm interactions is not sufficiently developed to rule out diseases and pathogens on salmon farms as contributing to the decline of Fraser River sockeye and posing future risks.

So, ten years since the commission, what has the DFO discovered?

Nine studies on the risk of diseases and pathogens being found in farmed salmon and transmitted to wild salmon found the risks to be minimal in all cases.

In other words, despite the federal government's own scientists making clear that there is no meaningful evidence of a tie between open-net farming and the decline in wild salmon populations, the government intends to proceed with its plan to render entire swathes of BC's coastal economy effectively sterile, starting with the Discovery Islands and ending with the entire open-net salmon farming industry.

Whether it comes to following the science or seeking the well-being of coastal residents, British Columbians could be forgiven for asking if the DFO even cares.

The DFO's nonsensical policy only hurts local communities and First Nations while failing to do anything to address the real causes of population decline in wild salmon. Likely causes include climate change, shifts in the natural predator mix (like growing seal populations feasting on wild salmon) and pollution in our waterways. More than anything else, I am persuaded that microplastics are massively affecting the reproductive cycles of many living creatures and I've certainly seen evidence that fish around the world may be experiencing population decline from this.

There is a difference between knowing that human activities are responsible for changing ecosystems and misattributing the phenomenon to a responsible, sustainable practice — in this case, aquaculture.

I once heard a federal politician describe salmon farming as effectively printing money for the benefit of local communities, investors and the global food supply. It's a high-protein, low-carbon, circular-economy product that ensures a high quality of life for coastal communities, many of which are largely Indigenous. It uses the free limitless energy of the waves, tides and currents to provide fish with something to swim against and bulk up, which is not easily replicated in land-based operations.

Unfortunately, misinformation and the misapplication of scientific knowledge to the matter is putting both small businesses and large employers at risk. And that is a frightening prospect because it is not only private interest at stake. At stake is the collective well-being of coastal communities, the provincial economy and the national salmon supply.

Local First Nations have been sounding the alarm. The First Nations for Finfish Stewardship Coalition released a statement in response to the discussion paper. While they describe themselves as cautiously optimistic, they are concerned that the timeline for engagement with First Nations is quite short and that the organization facilitating the engagement is a known opponent of salmon farming. This is hardly an objective leader in the process and brings attention to the apparent insincerity of the DFO's commitment to truly consult. Given the extensive impacts on local First Nations, it is no surprise that they are organizing to make their views known.

The dire situation dawning upon BC salmon farmers raises an important question about Canadian food security, more broadly. Already, the government is proposing a 30% reduction by agriculture farmers of the use of nitrous oxide emissions from fertilizers, ostensibly to fight climate change. Unfortunately, the result is certain to simply be a total reduction in the use of fertilizers (or effective fertilizers) with overwhelmingly negative impacts on the amount of food farmers can grow.

Similarly, instead of encouraging domestic aquaculture, the federal government appears to be keen on shrinking the industry and domestic food supply in the name of climate action. A form of low-carbon meat, farmed salmon could play a growing role in Canadian's diets. After all, if wild salmon is under threat, why not consume more farmed salmon instead of further reducing wild stocks? If both Canadian agriculture and aquaculture are no longer acceptable, what are Canadians supposed to eat?

Personally, I'm not quite at the point of accepting that I will have to eat farmed algae or processed insects — or that Canadians as a whole will eat bugs and be happy about it. But it certainly feels that we are moving in that direction with unrealistic environmental and climate policies overshadowing legitimate concerns like economic growth, affordability and food security. But before we impose non-traditional diets on citizens or transition to a food importer, rather than an exporter, I'd like to see an honest discussion of the trade-offs.

We are making choices as a country. The choice on salmon farming is whether or not we want healthy, natural food to be produced in Canada and whether we want the world's demand for clean protein to be sourced here or somewhere else.

What a tragedy it would be if Canada sacrificed its economic base on the altar of environmental responsibility to no meaningful end: if we both ceased to be relevant as a global player and the world just kept producing and consuming the exact same commodities, in more or less the exact same way.

Is the government paying attention to that possibility?

More frighteningly, do they even care?

Margareta Dovgal is the managing director at Resource Works. Follow her on Twitter and LinkedIn for more hot takes on natural resources and making the world a better, more prosperous place.