British Columbia ranks third highest among the provinces in new report card, and when compared to non-resource nations its energy habits could be improved.

Canada should transition to alternative fuels like natural gas to cut back on air pollution, says the Conference Board of Canada in a new report card on the environment that awarded high marks to British Columbia for its work on greenhouse gas emissions and other areas.

Residents should switch to alternative fuels like natural gas to heat their homes in order to substantially cut back on PM10 emissions, said the board’s first annual environment study released on April 21.

With a “particularly bad” record on particulate matter, Canada should also invest in development of alternative fuel vehicle (AFV) technologies, to reduce diesel and gasoline consumption by the transportation industry.

British Columbia rated strongly overall on many indicators, even against several countries from western Europe with tiny land areas and no resource economies:

The strong performance by BC backs up an earlier study from the Ivey School showing that per capita emissions in BC, Ontario, and Quebec are comparable to best performers in Western Europe.

The conference board did not rank Canada alongside many other resource countries, instead choosing a basket including Switzerland, The Netherlands and Belgium.

"As a result, Canada naturally has higher per capita energy consumption than other comparable countries, as a greater proportion of its energy is lost during transmission, and transport distances for goods and people are longer.”

The report also acknowledged the fact that unlike many other developed countries, "Canada’s economy relies heavily on primary industries, such as resource extraction and agriculture."

Canada is also relatively far north, and unlike the comparator countries from Europe that are at a similar latitude, Canada does not benefit much from the warmth provided by the Gulf Stream (and, in particular, the North Atlantic Drift). The cold climate means more energy is required for heating, on average, than in many of the comparator countries.

Comparing a country like Canada with small, densely populated western European nations is not very relevant. Where it really counts, Canada ranked above the only other diversified resource nations on the list of places studied. The United States is two places behind Canada and Australia lags by three places. 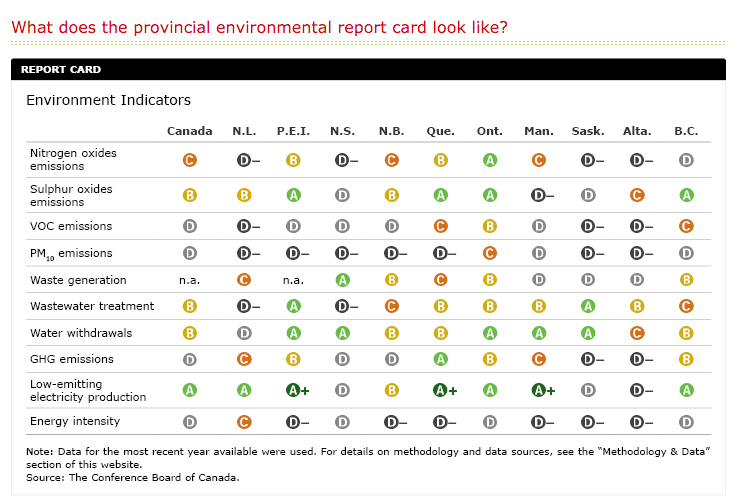