Here's why Canada depends so much on its energy exports

What country wouldn't want to retain, and keep improving, a trillion dollar industry? (If it was lucky enough to have one, that is.) Stewart Muir looks at some surprising data. 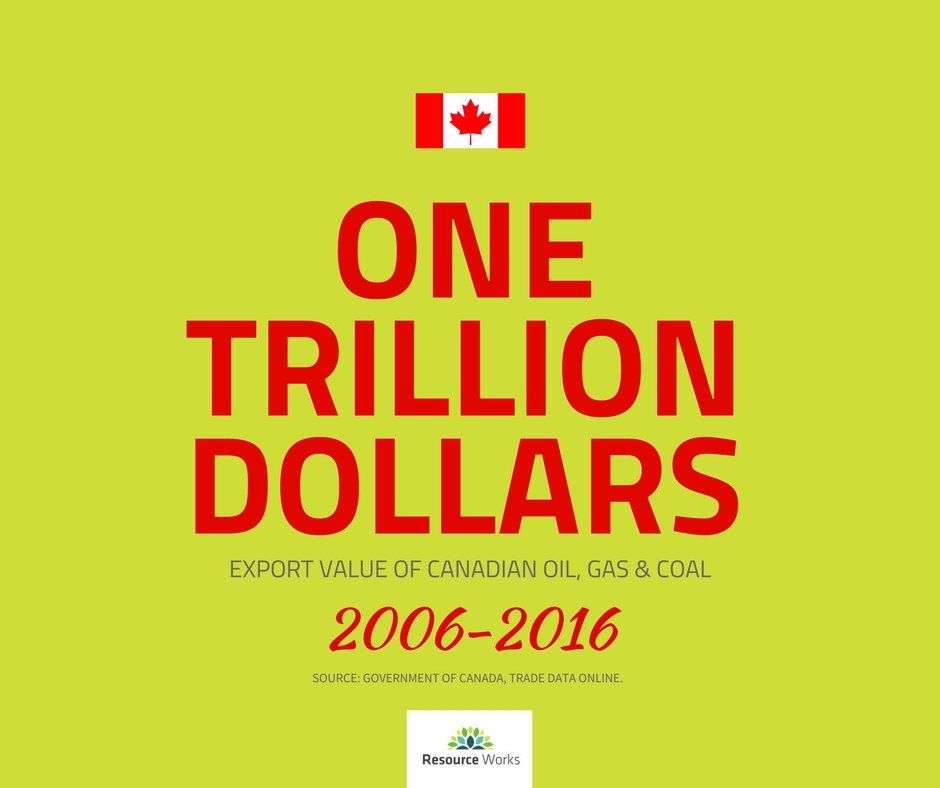 Canadian resource industries continue to have a highly positive impact on the well-being of the country. Yet there is no shortage armchair critics bamboozling the public claiming oil, gas and coal do not provide value to Canadians.

Even worse, there are even elected officials who blatantly state the falsehood that these industries do not exist.

Recently I read an ivory-tower warrior claim that the oil, gas and coal sectors in Canada are "sunset" industries.

Nothing could be further than the truth. So what gives?

In fact, the Canadian hydrocarbon sector is a trillion-dollar industry.

The data plainly show that we have a large and growing reliance on these industries. Between 2006 and 2016, the value of hydrocarbon exports topped the $1 trillion mark. Of our 25 top export categories, they have accounted for as much as 49 per cent of the total value. In 2016, about 1/3 of the top-earning export categories were hydrocarbon products.

As a share of overall goods exports, these energy categories have been up to 25 per cent of Canada's total exports – a staggeringly large dependency if you think about it.

Another way to come at the data is to say that from 2004 to 2016, oil and gas alone (not including coal) accounted for over $1 trillion worth of exports.

It's an untruth to say that hydrocarbons are of decreasing economic value. True, they have been flatlining since 2014 due to low commodity prices worldwide. The Canadian industry responded by upping its game through productivity gains and the resulting trend lines are pretty steady, as this chart shows: 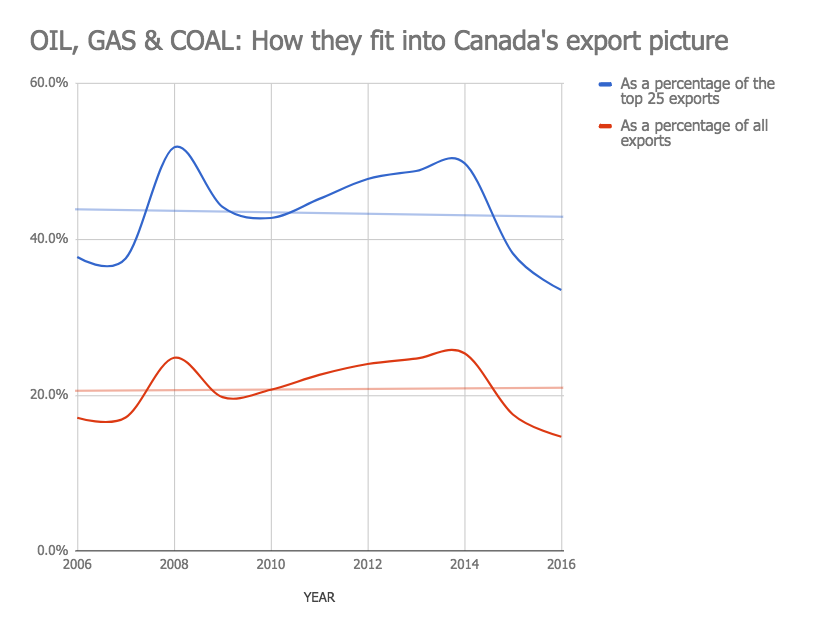 (Now just imagine that curve shooting upward when prices do bounce back, as they inevitably will.)

Although some economists lament that Canada is too reliant on its resource exports and a handful of manufacturing industries, common sense tells us that the solution to this problem is not to shut them down, as so many activists want us to do. We need the revenues too much, since if we don't have them it's not possible to pay for the things we need – including protecting the environment.

And what things do we need? The chart below shows a couple of examples: 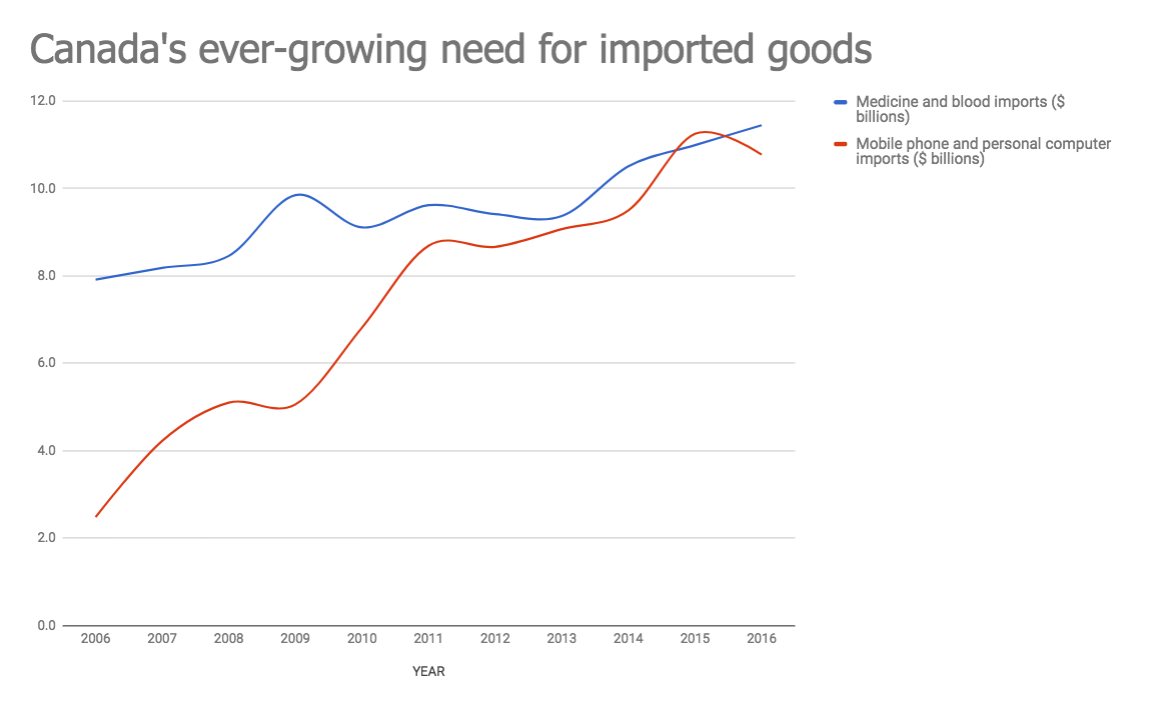 Since 2006, our annual need for imported medicine and blood/vaccine products has grown to over $11 billion a year. In the same time period, the consumption of mobile phones and personal computers has grown more than fourfold, also to approximately $11 billion annually.

That's $22 billion a year in total. Where can we find the spare money for this? From exports, of course. The only alternative is to put it on the national credit card (so to speak). Mercifully few of us are silly enough to think that's a good idea.

With the dominant role played by energy exports, there is a clear connection between them and these essential imported goods that can make the difference between life and death for millions of Canadians.

What if we decided to heed those who say it's time to stop exporting oil, gas and coal? Could we shrink our export economy by one quarter or more? The fossil-fuel opponents says it's simple: all you need to do is "build sustainable businesses" and pursue "new forms of community investment" and "innovations in food systems" that are "more inclusive".

Simple, right? Actually, such clichés are of no help to someone dying in a hospital bed.

The chart below depicts the export categories that have consistently been in our top 25 classifications year in and year out. 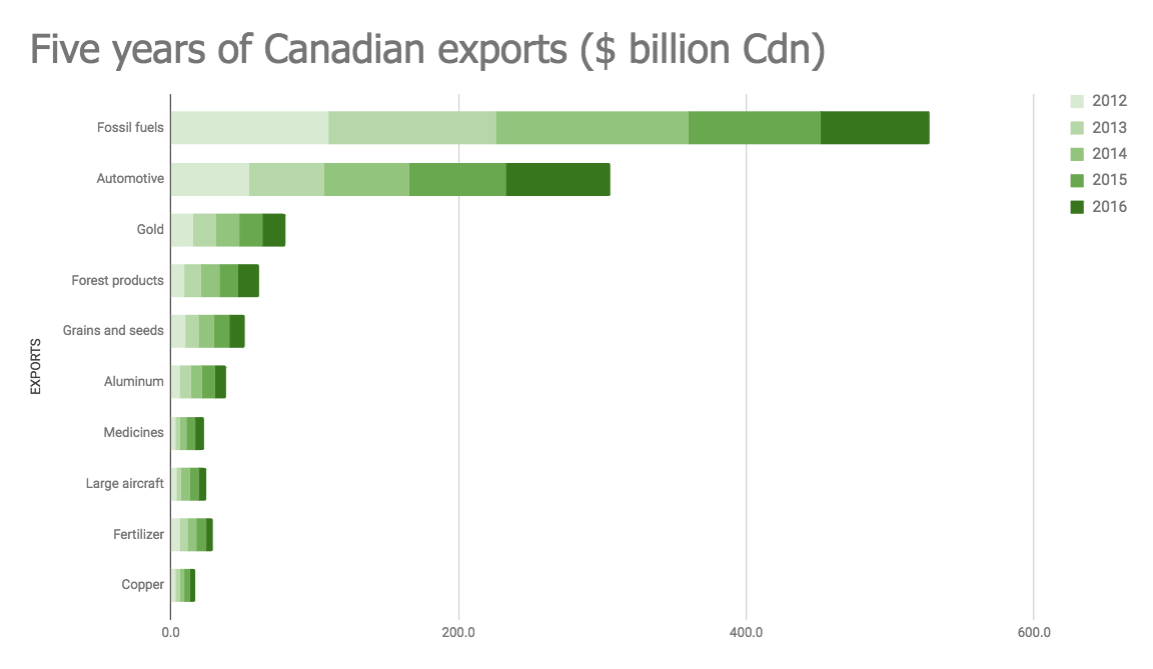 Exports of fossil fuels – crude oil, other petroleum oils, natural gas and coal – make up 45 per cent of this elite basket. Canada does need to continue improving its environmental performance through innovation. Canada cannot afford to stop exporting resource commodities. Nor is it desirable to do so, as that will only increase the market share for similar products from jurisdictions that are socially and environmentally unsustainable.

The path forward is to continue developing our resources responsibly so that our sick have medicines and our businesses are able to acquire the high-tech tools required to stay competitive. If we do this, and only if we do this, Canada will continue to be a beacon of health, freedom and prosperity for the world.