What would it take to run ALL of BC's cars and trucks on electricity?

In 2015, almost everyone agrees that the world needs to change the mix of fuels it uses. But exactly what the result needs to look like, and how quickly that can happen, is one of today's most pressing questions 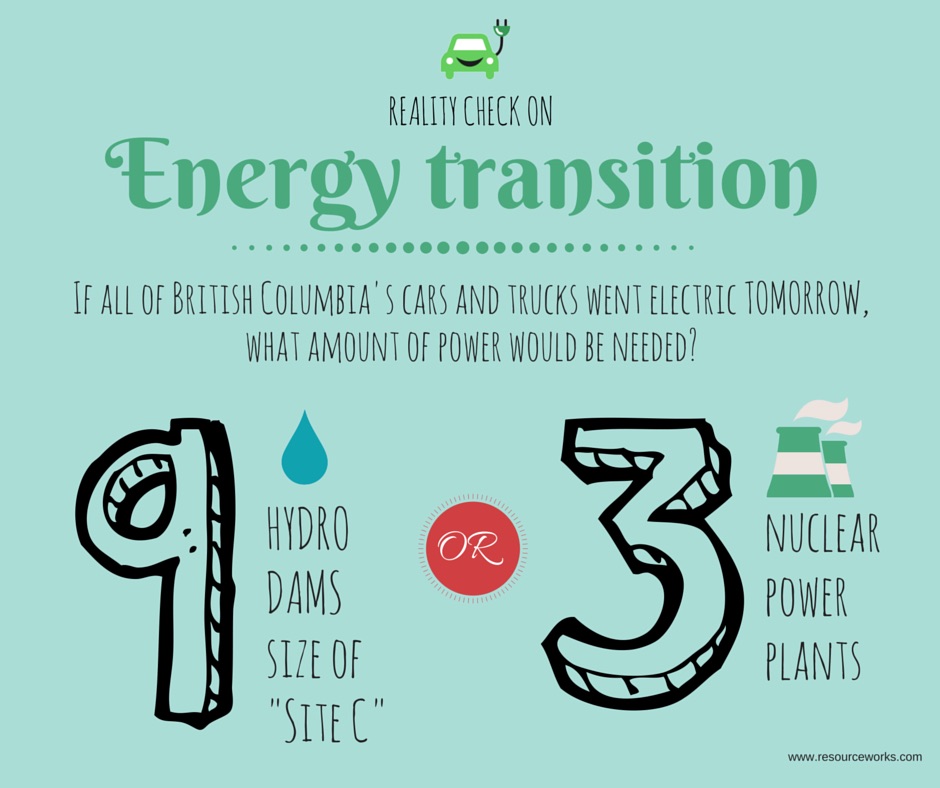 The future of global energy is more natural gas, more nuclear, and more renewables like hydro. The energy sources that make the cut are the ones that meet these criteria:

Globally, it will be decades before these energies overtake oil and coal. In the meantime, policy makers are facing a lot of decisions.

Supposing that British Columbia chose to move its entire car and truck fleet to electricity, what would be required of new power sources to equal the existing input derived mostly from gasoline and diesel? This is the question posed by the author of this blog that specializes in energy questions pertinent to the local region.

A basic assumption is that any new energy sources would need to equal current consumption. In 2013, British Columbians consumed approximately 4.5 billion litres of gasoline and 2.1 billion litres of diesel fuel (Stats Can). Assuming that all vehicles could be converted to electrical supply, and assuming that various efficiencies would make the new clean fleet more economical to operate, here are two options:

It's a thought-provoking idea. Single massive solutions like these examples are, however, a thing of the past. In all likelihood, the reality will be that there is a complex mixture of sources that provide our energy in future decades.

At a later time, we'll look at what is required to make this transition with wind and solar energy.

Thanks to A Chemist in Langley for providing the work to make this possible. His detailed blog post is well worth reading.

For another perspective, check out this newsletter by economist Jock Finlayson of the Business Council of British Columbia, here. He makes a number of thought-provoking points:

Plenty to think about on the path toward energy transition.