Here’s a question that gets posed to us fairly regularly: Is BC really a resource-based economy?

Many people seem convinced that natural resource industries were a big part of BC’s history, but what about today? It’s understandable why people can be a bit unclear about this. While we certainly hear a lot about natural-resource issues in the news, most of us live in big cities, far removed from the actual work of harvesting trees and ores.

My answer is that BC has a diversified economy. So we’re a bit different from highly resource-dependent provinces such as Alberta or Saskatchewan. And this is a great thing. A diverse economy is one of the best safeguards against dangerous economic shocks and all the hardship they can bring.

But it’s important to recognize that natural resources play a crucial role in our diversified economy, and nowhere is this seen more clearly than in our exports.

BC is regularly described as a small trading region. This is what defines us as an economy, alongside the fact that people seem to be prepared to pay enormous amounts of money to live here.

Our exports support the standard of living British Columbians enjoy, but it can be difficult for people without some economics training to understand why that is. One way to wrap your head around it is with this amusing story made famous by economist Steven Landsburg in 1993.

In the US, Landsburg writes, there are two ways to get cars. Build them in Detroit or grow them in Iowa. Most people have a pretty good idea what building cars in Detroit looks like, but growing them in Iowa? It’s actually pretty simple. You grow grain in Iowa and stick it on a ship bound for Japan. A few months later a different ship shows up loaded with cars. The point is that trade is just another kind of technology used to produce things.

It works the same way in BC, except that you’ll want to switch out the grain for wood pulp or something. This is how BC produces everything from cars to computers to cappuccinos. Our technology of choice is trade, and the raw material for this particular type of manufacturing is exports.

BC exports dominated by natural resources

So here’s what BC’s commodity exports looked like in 2014: 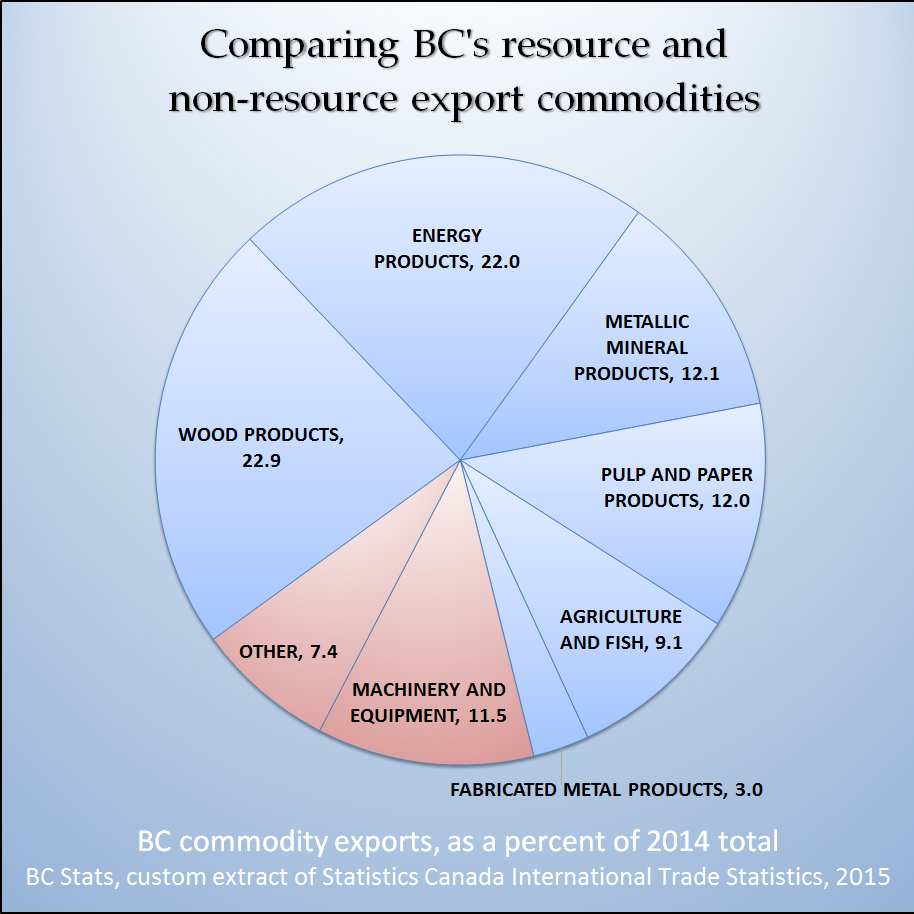 As you can see, natural resource commodities make up about 80 percent of the total. Our top five exports are all natural resources. In order of value, they are lumber, coal (mostly the kind used to make steel), pulp, copper and natural gas.

One of BC’s most significant recent economic success stories is how we’ve been able to diversify our trade, which helps diversify the economy as a whole. (Check out my recent post looking at BC’s growing trade with Asia.) The chart below compares our resource and non-resource exports over 25 years. 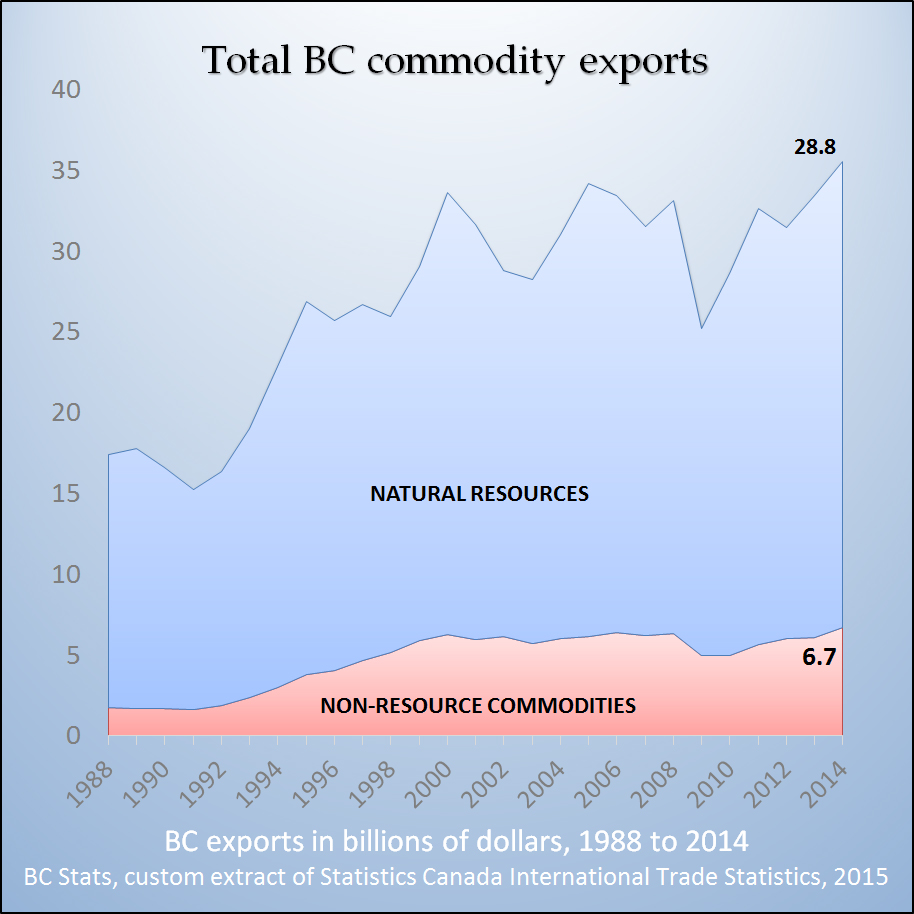 You can see that natural resources have accounted for the vast majority of our commodity exports over this time. But you might also notice that our non-resource exports have been inching up as a share of the total. They went from about 10 percent of the total in 1988 to almost 19 percent in 2014. As I mentioned before, economic diversity is a great thing, and the fact that BC’s non-resource exports are growing is something to celebrate.

But as you can clearly see in the charts above, it would be a mistake to conclude that BC’s resource economy is somehow behind us. As the export numbers demonstrate, resources are a crucial part of our economy, and they will likely remain so for the foreseeable future.