A maritime archivist reveals the story of how Vancouver became an export port for a commodity it has been shipping safely since 1956.

This article appeared in the May 2017 print issue of the BC Shipping News and is reproduced with permission.

In the early 1950s, exporting the oil discovered in Alberta was still in its nascent stages. The dream was to ship the oil products out of the country — primarily to the United States — so that Canada could become a major player in the oil exportation business. It was the discovery of crude oil in Leduc, Alberta, that kick-started the province’s lucrative oil industry, and first inspired the idea of the Trans Mountain Pipeline.

On March 21, 1951, the Trans Mountain Pipeline Company was created by a special act of parliament. Ownership of the company was split between Canadian Bechtel Ltd. and Standard Oil. That same year, after a three-day hearing, the Board of Transport Commissioners approved the pipeline proposal from Trans Mountain. In addition to exporting oil products to the U.S. and Asia, another argument in favour of the pipeline was that it would offer British Columbians cheap and accessible oil. It was also seen as a strategic defence should a war with the Soviet Union ever occur. The approval process did not involve public consultation or an environmental assessment. After being given the official go-ahead, engineers took numerous trips between Edmonton and Vancouver to determine the best route for the pipeline. They finally settled on the Yellowhead Pass route and generally followed existing railway lines and roads. Between February 4, 1952, and October 17, 1953, the Trans Mountain pipeline was constructed, starting in Edmonton and ending in Burnaby. An 8.9-kilometre spur line was also constructed from Sumas, B.C. to Ferndale, Washington (and later Anacortes). Canadian Bechtel Ltd. was responsible for the engineering, design and construction of the project. 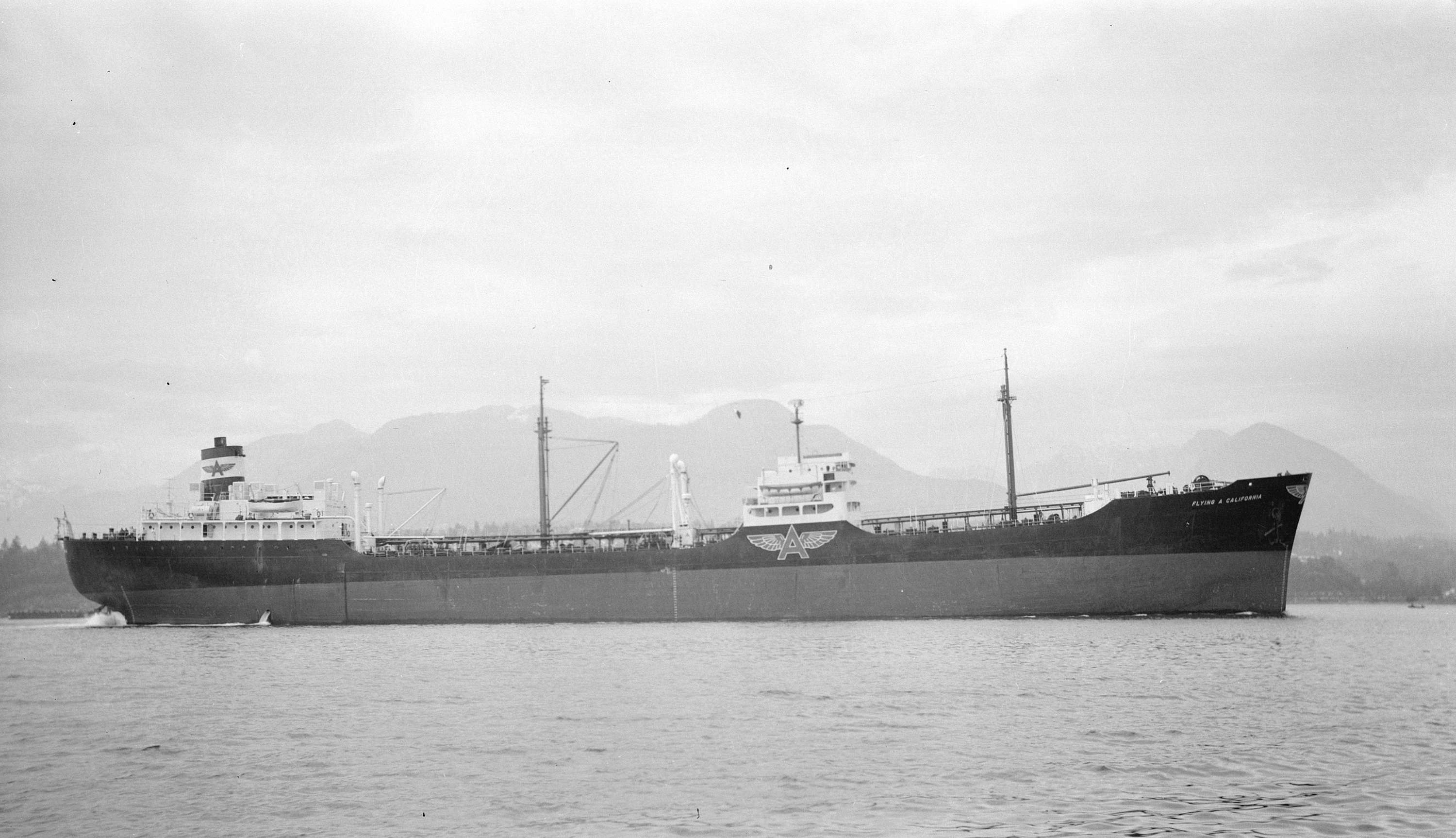 On October 17, 1953, the first oil was pumped through the pipeline. The total cost for construction was $93 million. Initial capacity was 150,000 barrels per day. (The current capacity is approximately double that amount.) The pipeline had four pump stations along the 1,150-kilometre route. It wasn’t until January 1, 1956, that an offshore tanker loaded the first shipment bound for the United States. The vessel, Flying A California (pictured), loaded 118,000 barrels (worth $350,000 at the time) at the Westridge Terminal. The dock was built in 1953 but had never been used before. (Note from editor - Video below from 1956 gives a taste of what the port was like in those days.)

The purchaser for this first shipment was the Tide Water Associate Oil Company that produced, refined, and marketed oil in the U.S. This shipment, although seemingly meagre, was momentous in that it marked the first time Canada broke into the California oil market. Before this shipment, B.C. imported oil from California for treatment at local refineries. This shipment was also important because its original purpose of moving oil from Canada offshore from the Port of Vancouver was finally recognized. This was truly the proof of concept that Alberta crude oil could be exported to California for profit. 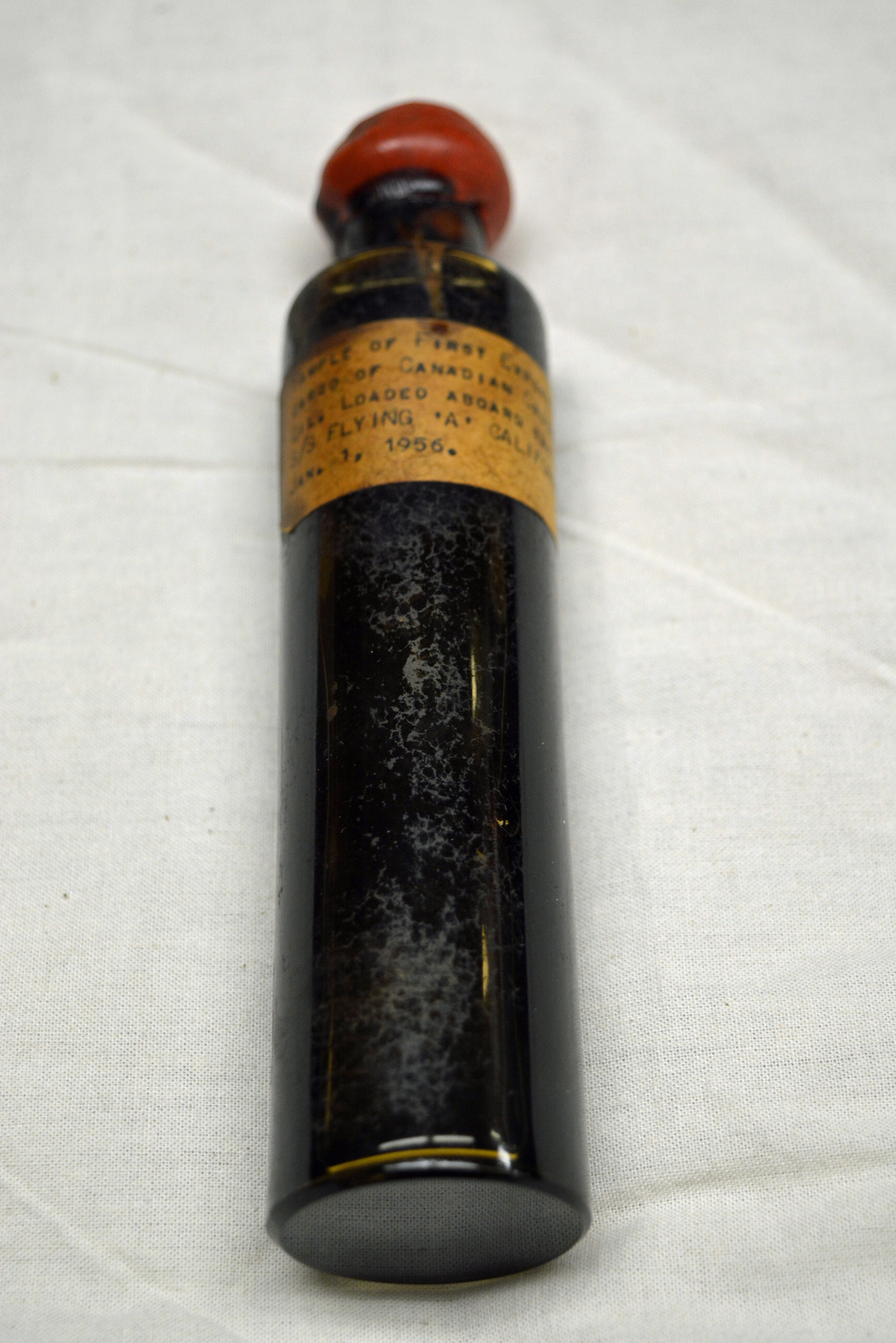 The Vancouver Maritime Museum holds a unique memento of the historic first shipment of crude oil out of Vancouver. Pictured here is a sample of the first crude oil sold to the California market. The sample was collected by petro-chemist Lewis H. Detz.

The Flying A California, the vessel which held the notable first shipment, was part of a small fleet of West Coast-based tankers owned by the Tide Water Oil Company. Tide Water was well known for its “Flying A” brand products and gas stations, as well as for Veedol motor oil. The company was owned by the famous Paul Getty who acquired it in 1953. The Flying A California was a 16,000-ton tanker manned by a crew of 40. She was one of four U.S.-built tankers added to Tide Water’s fleet in 1954. The vessel was 514 feet long with a speed of 16 knots and could accommodate 131,000 barrels. Her master for this first shipment was Captain Oscar Bengtson and the local agents for the ship were C. Gardner Johnson Co. Ltd. In 1957, the Trans Mountain pipeline capacity was expanded with the addition of a 160-kilometre loop. The Flying A California was reported to still be carrying oil products from the Westridge Terminal in 1960. At that time, it was loading 126,000 barrels bound for Portland, Oregon.

The Westridge Marine Terminal continues to be a fixture within the Port of Vancouver’s domain, and, unless you’ve been living in a cave for the past five years (the length of time the approval process has taken so far), current operators, Kinder Morgan, have applied to twin the existing pipeline and replace the present single berth at Westridge with three new berths. With these improvements, tanker traffic is expected to increase from approximately five Aframax-size tankers per month to 34 tankers per month. The pipeline’s capacity would increase from approximately 300,000 barrels a day to 890,000.

The terminal is regulated by Transport Canada and the National Energy Board. Along with shipping crude oil, the facility also receives and ships jet fuel. A jet fuel pipeline system delivers the fuel to the Vancouver International Airport. The terminal has three storage tanks and handles volumes of approximately 395,000 barrels.

Since the discovery of oil in Leduc, Alberta over 70 years ago, and the subsequent export of oil out of Vancouver’s Harbour, the oil and gas industry is now the backbone of the province’s economy and contributes significantly to the national economy. The Trans Mountain pipeline proved to be a key component to the industry’s success. As the industry moves forward and expansions continue, it is important to take time to see just how far we have come since that first small shipment aboard the Flying A California departed Vancouver in 1956.

Lea Edgar started her position as Librarian and Archivist for the Vancouver Maritime Museum in 2013. She can be contacted at [email protected]

The cover image with this blog post was shot by Fred Herzog. It shows a downtown Vancouver scene in the era when the pipeline commenced operations.