As British Columbians are bombarded with emotional claims about old growth forest practices, the trained professionals who work in the field see a very different picture. Stewart Muir examines the facts.

Got a forest question? Ask a forester

While news media outlets continue the daily pilgrimage out to Fairy Creek to see what fresh and ingenious ways protesters have thought of to get themselves on TV, we might be seeing a different story if those same reporters also took just a smidgeon of time to talk to professional foresters.

Crazy idea, right? Like talking to a physician if the subject is health. Or an accountant about taxes.

What could they possibly know about their specialist subject?

Maybe a lot. British Columbia's forest professionals association has 5,300 members, the largest such grouping in Canada. They are a regulated profession that follows rigorous rules. A member's expertise includes regulation and ethics, legislation, and all of the technical and scientific background required to make informed decisions about forest management.

Recently when people were losing their minds in social media about a photo of a large log on a truck near Nanaimo, one of my cool-headed forester acquaintances pointed out those in the profession know to be true: a large tree isn't necessarily an old tree. I looked into it and, sure enough, there is actually no evidence to show that the Sitka spruce on that truck was older than 210 years. (The definition of old growth on the coast is 250+ years). The world's largest specimen of this tree is located on the Queets River only 100 miles away from Nanaimo in Washington State; it measures 4.4 metres across and its age is estimated at between 350 to 450 years old. The Nanaimo tree is only 60% as big as the Queets tree so it could easily be under the old growth line. This means that almost every story and commentary published to date about this incident is incorrect, and nobody cares. The same standard of sloppy analysis and fact-checking occurs in most coverage about the Fairy Creek situation. That's the power of emotion over fact.

Recently, we parsed the current state of knowledge about forestry and issued this report to provide information and context that was being routinely overlooked.

Foresters are a diverse bunch. There's not one "official narrative" of forestry professionals like there is from the old-growth protesters who all seem to insist that the last large old-growth tree is going to be cut any day now (it isn't).

When was the last time you saw a real live forester on the news? If your answer is almost never, that's because reporters, editors and producers have been persuaded by activist campaigns that reliable knowledge about forests and conservation must only be sought from a small handful of experts who espouse the particular sky-is-falling narrative that an entire pressure campaign has been structured around.

Nobody can be trusted who does not validate the catastrophe diagnosis – because we're in a crisis, right?

On closer examination, it turns out that several of those familiar experts are not even forest professionals or specialist forestry academics. They are drawn from other fields. While they may bring genuine authority and scholarship to their work, that doesn't make them foresters. I'm not dissing disciplines like ecology here, because it brings a valuable perspective that should be part of holistic decision making. There are bigger issues here that start on our university and training campuses.

One professional forester who was involved in the recent official old growth review panel has predicted that public strife will continue if protester demands are not met. This is not so much an observation about what should happen as it is about the skills and resources of protest organizers to weaponize emotion, with forestry science and public values once again losing out.

To some extent, the news coverage is a reflection of the divergence. Within the forestry profession itself, schools of thought compete for influence and debates can be intense.

Yet it remains obvious that important public discussions about forestry have a tendency to exclude forestry experts.

This is why we have government, industry and First Nations saying one thing and the environmental activists saying another.

Is the state of forestry perfect? Absolutely not. It's not a crisis or a disaster either. Outlier viewpoints, often drawn from entirely different professions than forestry, make great headlines but are not reflective of widely understood truths among forest professionals.

Aided by a forestry friend who happens to be a genius with numbers, let's get educated about how foresters see the world.

For starters today, here are five things that forest professionals know that the anti-forestry movement might just be horrified to learn I've shared...

On the coast, which includes Vancouver Island where the controversy is centred, forest yields were on a long-term downward trend for decades. That has now flattened out and the trend is in balance moving forward. We should be celebrating, not befouling the woods with garbage and cutting the brake lines of industrial ambulances.

2. Managed forests on the coast are sustainable over the next century and beyond 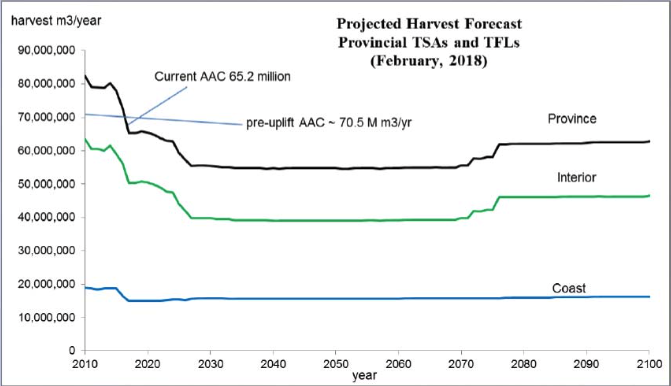 The stereotype of the forest industry racing to harvest that last tree is bunk. One professional forester I know likens the current state of coastal forestry (blue line) to living off the interest of your nest egg. Coastal forestry in B.C. is on a long term trend where every year we are harvesting an amount more or less equal to the amount that is growing, and not cutting into the capital. Managed correctly, this is the future that is already unfolding. It could be undone if there are sudden, politically motivated policy shifts that reverse decades of forest management and planning.

3. Forest companies are harvesting less than they're allowed to 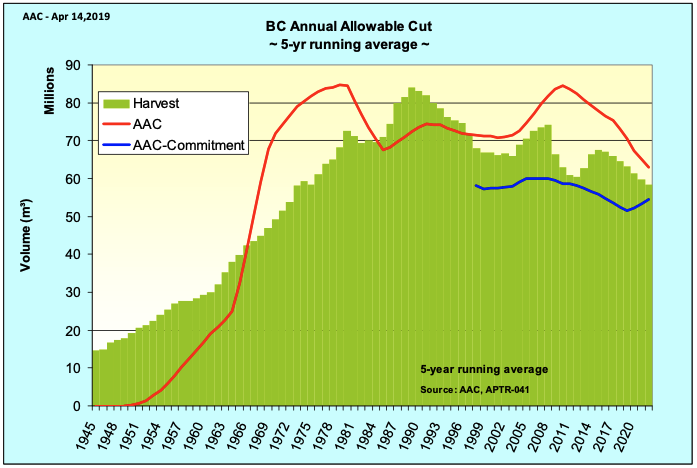 As protester rhetoric grows to desperate levels, all kinds of new tactics are being tried to force the provincial government to make decisions based on emotions and opinion polls rather than facts. That includes highly derogatory depictions of those who work in the forest industry as rapacious and uncaring. That is unearned and unfair. As this chart shows, forest companies are harvesting less than they are allowed, not more, probably due to a combination of factors including B.C.'s legendary bureaucracy and the restraint of foresters who must consider not present harvest volumes but future ones as well. 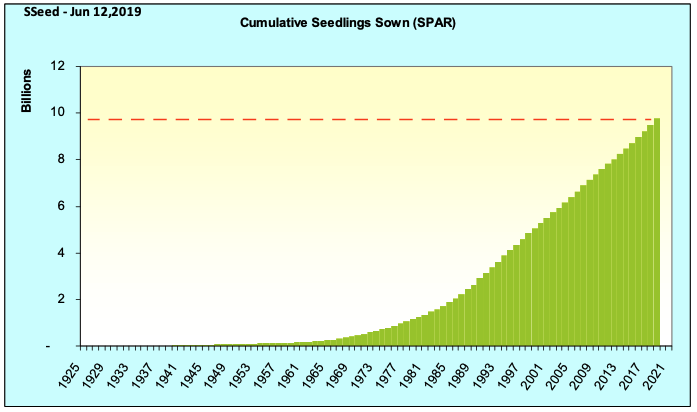 It's not just that B.C. plants a lot of trees every year (more than 300 million annually). Over decades of silviculture, 10 billion of them have now been planted. The seedlings are drawn from carefully managed stocks that ensure the perfect genetic fit for various microclimates, terrains and growing conditions. One great fallacy is that tree planting on the coast represents some kind of plantation system, evoking rows of clone-like identical trees. In fact, when a cutblock is harvested it is replanted with mixed species that replicate the pre-existing natural conditions. Seedlings are planted in such a way that natural ingress of other species is encouraged. When I speak with professional foresters, as I frequently do, this is a particular point of pride. It's why the average person walking through a second growth forest could easily think they are in an area of old growth.

5. Roughly 25 million young trees are planted every year just on the B.C. coast 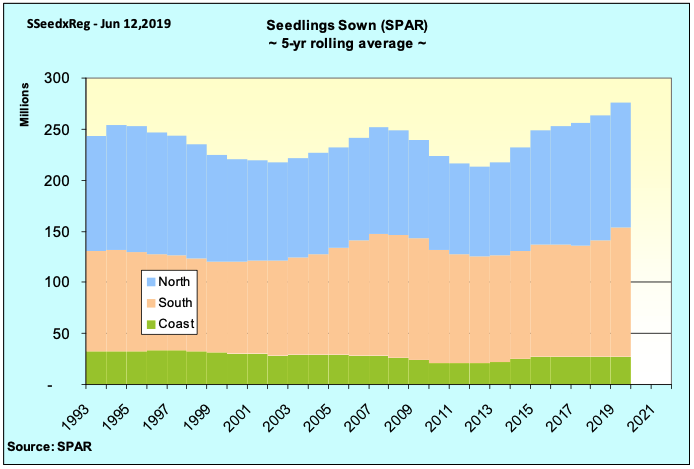 Most of the replanting goes on in the Interior, and you can see in this chart that in recent years there was quite an increase in how many million seedlings went in, attributable to the aftermath of the pine beetle infestation that killed millions of trees. However, the coastal story is one of consistent replanting at steady levels over the years – evidence not of a crisis situation but of stability. On average, a hectare of replanted forest takes 1,000 seedlings – to imagine this, try to picture the floor plate of an Ikea store that has 2,700 trees growing on it.

On Vancouver Island today, most of the forests are protected in reserves. There is no chance that old growth will ever run out. Within the working forest, every day trees naturally age into the technical status of old growth (250+ years), while some are harvested.

The bitter opposition to First Nations forest management from some corners of the environmental movement increasingly has an overtone of paternalism and all of the things that Canadian society got so tragically wrong in the past. Stand down, those who are trying to interfere in today's UNDRIP-driven First Nations governance.

Environmentally sound and sustainably managed forestry results in First Nations reconciliation, well-paying jobs, climate-friendly materials that are used for everything from medical masks to houses, and substantial revenues to government.

What's not to like about that? If there's a mystery here, that has to be it.

My advice to reporters covering the Fairy Creek protests is: go ahead and get the protest images that your producers want. Talk to the chosen experts that activist groups are steering you to.

But do yourself and everyone a favour and tell the whole story, because right now nobody is doing that. Find some forest professionals and academics to interview because that is how you'll be able to produce balanced coverage. Interview the forestry scientists who work in B.C. in special niches of the field that you might not even have heard of.

You'll find foresters working in government, for forest companies and First Nations, at universities and colleges, running municipal community forest programs, and in consulting practice. They can be reluctant interviewees and at first might assume that you aren't going to take the necessary time to understand the complexity of their field.

But it's well worth the effort.

Broadly speaking, British Columbia forest management is in a much better place today than some are insisting.