Myths and realities of fugitive emissions in natural gas production

Leakage of natural gas into the atmosphere before it gets to the consumer has been a source of concern for years, resulting in progressively better solutions

Liquefied natural gas (LNG), given its high-efficiency, transport safety record and low carbon emissions (as compared to coal or oil), is poised to become a dominant source of energy globally in the decades to come. This is especially important for British Columbians, considering our province's abundant natural gas deposits and geographical proximity to Asia-Pacific’s energy import markets.

Nevertheless, like other fossil fuel products, LNG does receive its share of criticism, which is nowadays more and more centered on the issue of fugitive emissions.

Fugitive emission is defined by the leakage of gases (particularly greenhouse impact- and heavy methane-) during oil and gas production. In practice, such leakage may also take place at natural gas wells, processing facilities, pipelines, and during storage, as well as at LNG plants. In other words, from extraction to market, gas leakage may occur from potentially anywhere with a loose valve or cracking pipe.

These diagrams do a good job showing the places in gas and LNG production where potential exists for fugitive emissions: 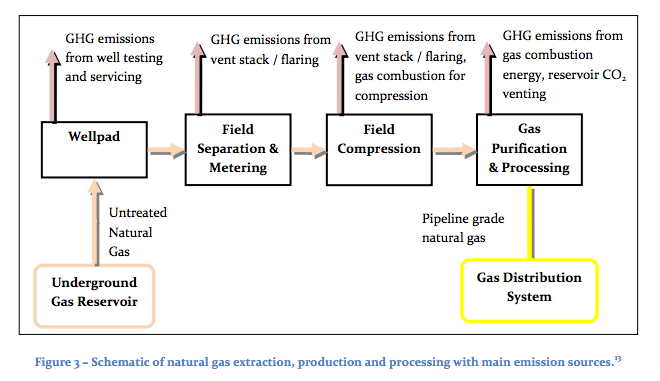 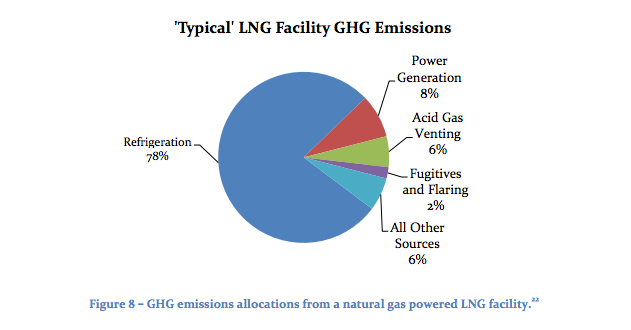 There is no denying that a great amount of gas has been lost into the atmosphere. Some estimate suggests that between 1992 and 2012, fugitive emissions accounted for 7% of the world's total greenhouse gas emission. Based on such facts, some environmentalists have launched persistent attacks on the natural gas industry, asserting that the overall environmental benefits gained from developing natural gas and LNG is outweighed by the costs. In this narrative, fugitive emissions sound like the "silver bullet" that will put the natural gas industry into a forcible decline.

Viewing the life-cycle of natural gas from production well to end-user, we can see a number of examples where some critical perceptions of fugitive emissions seem at odds with the available information.

Myth #1: The oil & gas industry doesn't care about fugitive emissions – just like other environmental harms they cause.

The oil and gas industry is often accused of negligence in addressing their share of the environmental burden. However, the same cannot be said for fugitive emissions. For producers, natural gas is the product being delivered to market, and leaked natural gas is, in effect, leaked profit. Rather than an issue of a negative externality, which the polluter may not have an incentive to address, fugitive emissions are a fully-internalized cost for the industry.

And this cost isn't small. Statistics show that the oil and gas industry is losing as much as $30 billion each year due to fugitive emissions. The pursuit of this lost opportunity is well reflected in daily operational terms – the hundreds of millions of dollars spent by the oil and gas industry on equipment and facility inspection, maintenance, and upgrades, all partially contributing to reducing gas leakage during every phase of the natural gas life-cycle.

The truth is, fugitive emissions are a serious issue but they are far from being the only source of greenhouse gases from the natural gas life cycle: 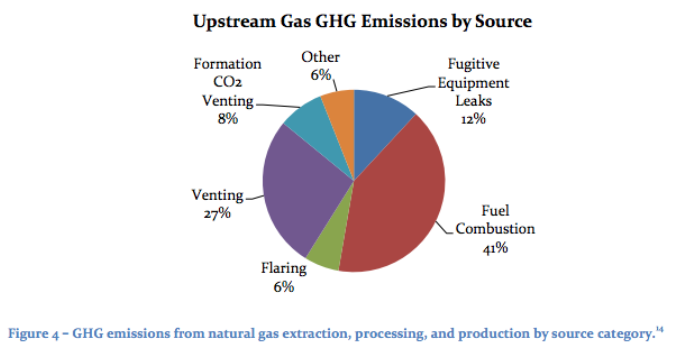 Here’s the bottom line: if even from a purely profit-driven perspective, the oil and gas industry has, and regularly demonstrates, more motivation to prevent this issue before it happens than those who worry about fugitive emissions purely from the perspective of preventing greenhouse gas emissions.

Myth 2: There is nothing we can do about fugitive emissions, except for shutting down the natural gas industry.

For many in the anti-gas camp, pessimism runs deep. Their tone on fugitive emissions often reflects a fateful conviction frozen in time: that, no matter what, the natural gas industry will not be able to substantially improve the situation.

Except the industry has been doing this for years.

While it is true that the process of improving natural gas production is extremely complex and challenging, thanks to the economic motivation previously discussed, the oil and gas industry has been battling fugitive emissions – long before the issue even showed on the radar of environmental groups – with many noted successes.

One such victory was the introduction of the flash tank separator more than a decade ago. During glycol dehydration, an important step preparing natural gas for transportation, the water content in natural gas is absorbed and removed. However, the same process also unleashes methane into the air – about 15 billion cubic feet annually according to a 2006 report for the U.S. Environmental Protection Agency.

The adoption of the flash tank separator technology, however, effectively vaporises the water content while recovering 90-99% of the methane that would otherwise be released in the atmosphere. The technology is now widely applied in the industry, benefiting the environment and bottom line at the same time.

Besides self-motivated improvements from the industry, government regulation is also evolving to combat fugitive emissions. Records show that the amount of gas leakage during production is highly dependent on how well equipment and facilities are being operated (and never mind the anti-gas camp cherry-picking of data to skew the facts on the leak rate.)

Based on a better understanding of the fugitive emissions issue, BC, Alberta, and some U.S. states are putting forward new rules regarding capturing volatile organic carbon (VOC), requiring the capture and flare of well commissioning vapour emissions. When fully implemented, these new regulations are estimated to reduce VOC emissions by as much as 95%.

It deserves a mention that Canadian gas producers are a step ahead of their peers south of the border. According to research, emissions from both conventional and shale gas production in Canada are generally lower than those of U.S. producers due to existing regulations on flare and vent. And who said we should be ashamed of our "dirty" energy industry?

Myth 3: Accounting for fugitive emissions, the production and use of natural gas can no longer be justified from an emissions perspective.

An argument central to the anti-gas narrative is that when considering fugitive emissions, natural gas will lose its low-emissions competitive advantage against other fossil fuel resources such as coal and oil – so we might as well stick to old, trusty thermal coal, rather than wasting time on getting gas out of the ground.

Given the current level of fugitive emissions, will natural gas really lose its reputation as the "cleanest burning fossil fuel"? Consider the graph below: 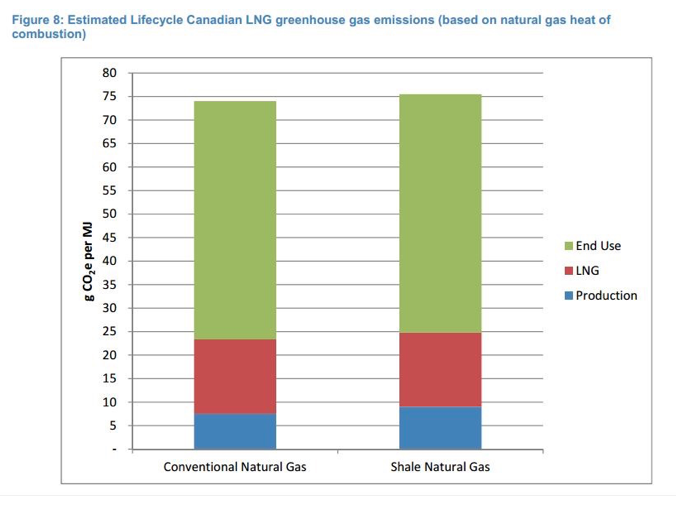 Emissions from production and liquefaction of conventional natural gas accounts for 31% of the product's life-cycle emissions (including emissions from all direct activities such as well/facility construction and engine exhaust), while the number for natural gas from shale is slightly higher at 33%.

This proportion may not compare particularly favourably to other fossil fuel alternatives such as new diesel (see graph below), another major contender for the "clean fuel of tomorrow" with only 24% of its emissions in production. However, in terms of absolute emissions, LNG is still 18% cleaner than new diesel and 28% cleaner than existing diesel. 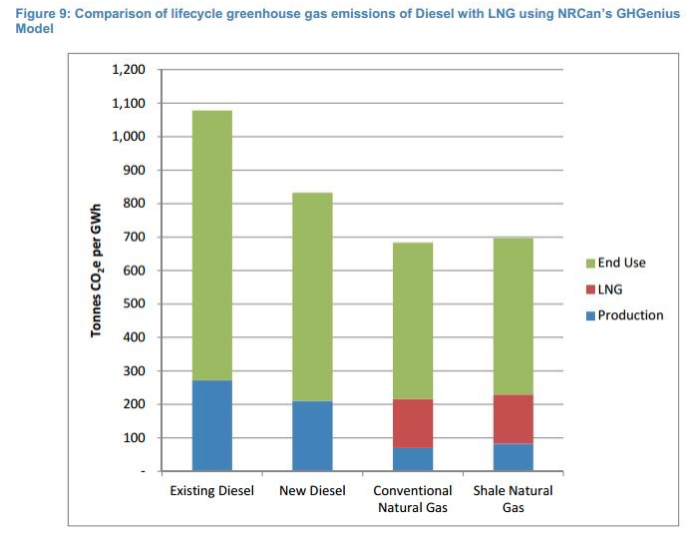 The Intergovernmental Panel on Climate Change, the authoritative voice of climate change today, states the issue this way:

"Fugitive emissions depend to a significant degree on whether low-emission practices, such as the separation and capture of hydrocarbons during well completion and the detection and repair of leaks throughout gas extraction and transport, are mandated and how they are implemented in the field.”

Let’s remember that for most developing countries, thermal coal, rather than diesel, is the primary energy source for electricity generation, and natural gas gives less than half as much emission in the end-user stage as thermal coal. The comparison is clear – while we fully recognize the substantial implications of fugitive emissions in the development of natural gas resources, it would be a mistake to write off the value of natural gas from an environmental point of view.

Fugitive emissions are many things: an environmental challenge, a $300 billion headache and opportunity, as well as a target for regulatory intervention. What they most certainly are not is a "death sentence”. And for the natural gas industry, continuing to proactively address these concerns will be key to ensuring its own future, as well as contributing to ours as British Columbians.

UPDATE: The Alberta carbon plan unveiled on Nov. 22, 2015 confirmed methane as an issue where there is "significant common ground" between industry and environmental groups". This suggests that industry is ready to put its money where its mouth is in pursuing improvements in equipment design and maintenance. 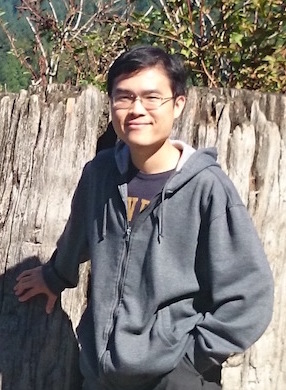 Wu Xu is a Vancouver writer who holds an MBA from Simon Fraser University and has a bachelor's degree in political science and economics. At present he is blogging about Sino-Canadian relations and Canadian politics. Most recently, he examined the question of water usage in natural gas production.