The Trudeau government's decision in late July to issue crucial environmental permits means the Site C project in north east British Columbia has cleared its final major hurdle. Construction is well underway for the $8.3 billion project slated to start producing electricity by 2024, which is when utility BC Hydro has predicted demand should exist for additional green power.

For those who have been exposed mainly to the arguments for why Site C should not be built, this outcome might seem confusing. Let's take a look at the issues in play that explain why federal and provincial governments in Canada were willing to stake political capital on the project.

1. Nations with heavy hydro dependence have the lowest emissions.

Some have derided $8.3 billion Site C as being "all wrong" – an example of bloated, outdated technology that is costing taxpayers too much money. There is also the argument that society's appetite for energy is trending downward and we don't need new sources of supply. Some are arguing that zero-emission sources like big hydro are "not green enough", and one protestor chose the statement of a hunger strike to maker clear her disagreement with the Site C solution. There are also those seeking to create leverage through political narrative-building. 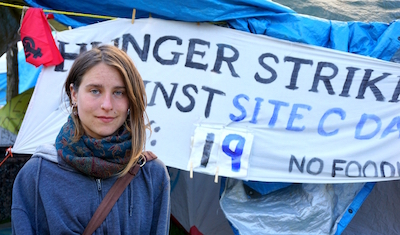 In light of these objections, why would Ottawa join BC's provincial government in signing off on controversial Site C?

The answer is blindingly obvious when you consider the global context: Canada wants to improve its global emissions status and hydro provides a proven solution, as the above chart from the Canada West Foundation demonstrates. The more hydro-dependent a nation, the less emissions its electricity sector produces.

2. Compared to natural gas and wind for electricity generation, hydro gets top marks for emissions, cost and reliability. 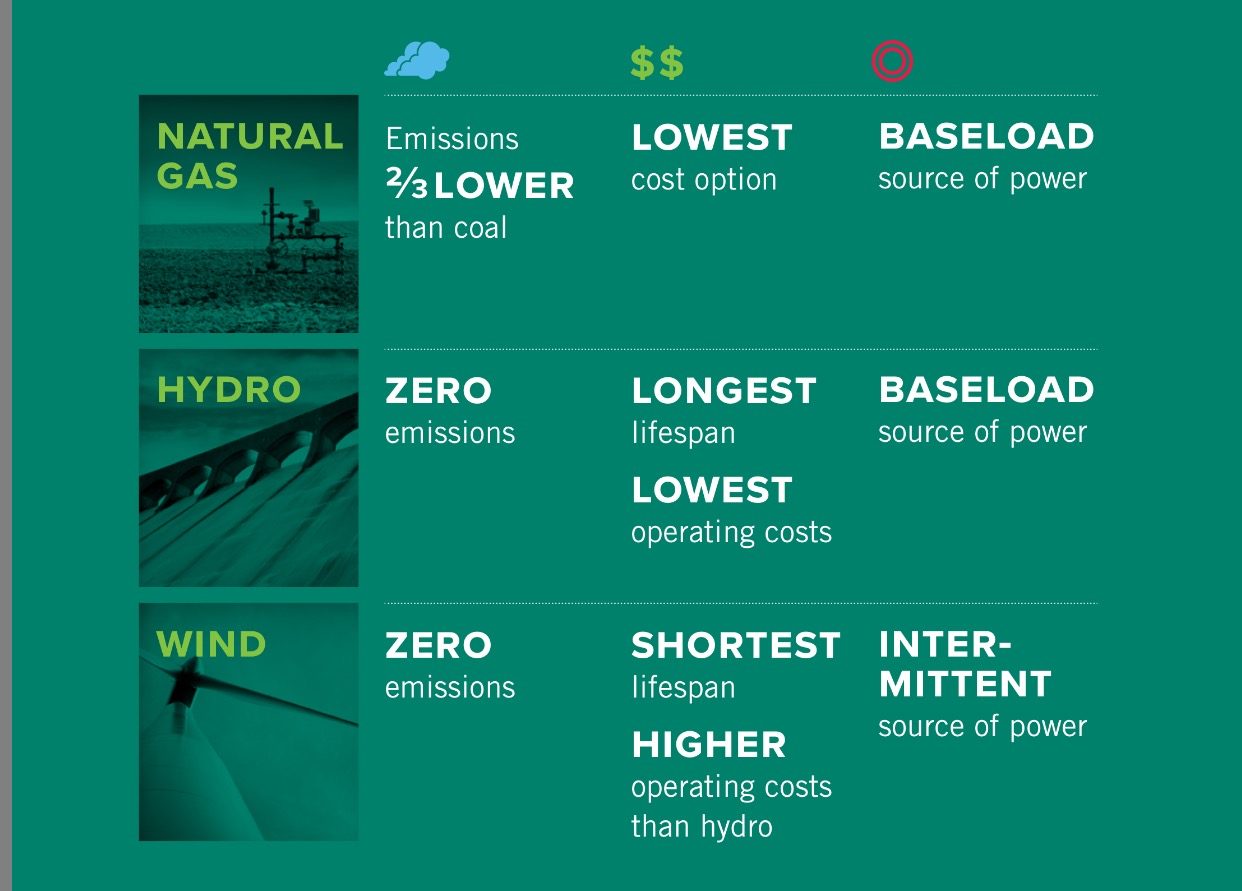 Governments have clearly recognized that with its broad diversity of energy options, Canada is one of the best positioned to pursue clean tech, green tech, and economic viability when it comes to energy solutions. In places that don't have clean options like British Columbia has, the risks of pursuing some renewable solutions are starting to become starkly apparent. Site C, enabled by BC's unique geography, provides a working example of how proven technology can be adapted to solve the problems of today and tomorrow.

This slide, from the same new Canada West Foundation report, clearly makes the case for hydro.

3. British Columbia hydro power could be sent to help "green up" the Canadian oil sands (and it's a big if, one not built into the business case of the project at present). 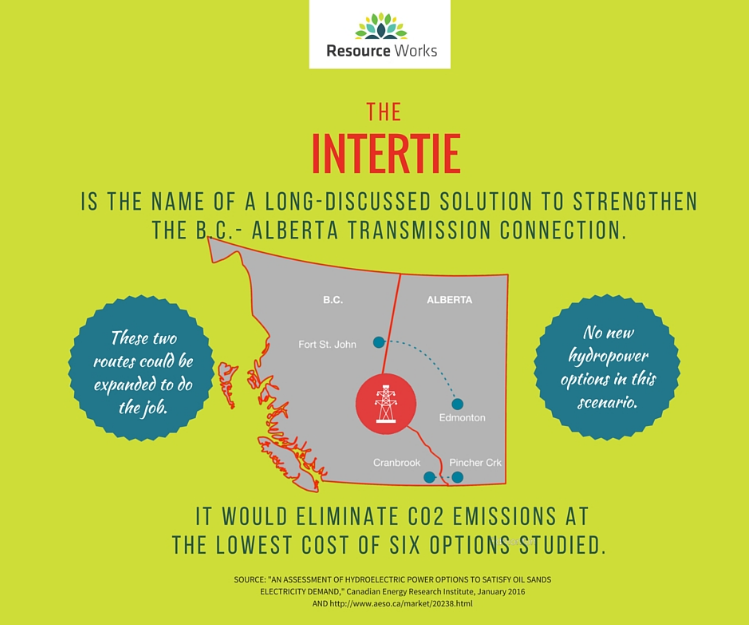 The less carbon intensive Canada's oil sands can become, the more the industry can continue to provide deep social and economic benefits to the nation. This is especially true now that a hard cap is in place on oil sands emissions. Clean electricity from sources like Site C can be a major part of the answer.

How to get BC electricity to the oil sands has been the subject of long-running studies and negotiations in western Canada, in support of an initiative known as the "intertie" project. Some analysts are now saying it is time to look at this issue even more deeply. Sending clean electricity from BC to the oil sands will further improve the image and competitive status of the nation's crude oil exports.

4. British Columbia gets almost all of its electricity from hydro, and as a result consumers have among the lowest costs in North America. 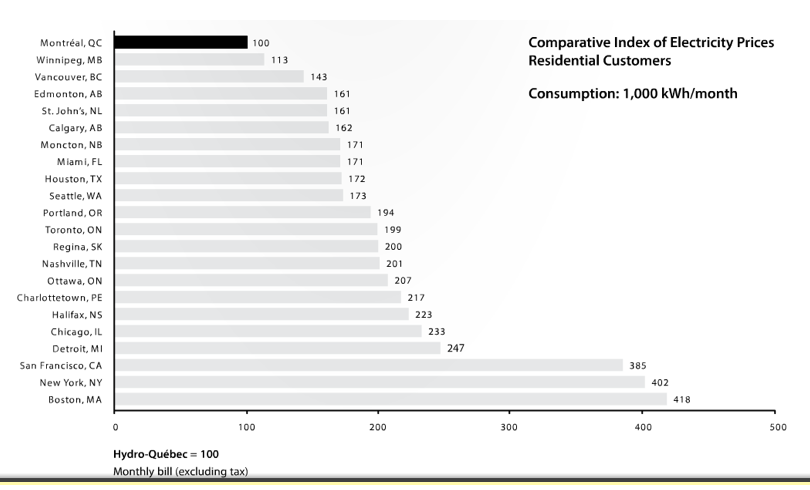 Don't believe data from BC Hydro? That's okay, this chart is from Hydro Quebec. It shows Vancouver has the third-lowest residential electricity rates. The reason why consumers are fearful of moving away from hydro electricity in BC will become evident in the next couple of charts. (SaskPower has produced a similar chart.)

5. BC has a wealth of options for future electricity supply – including wind, geothermal, hydro, natural gas, coal, wave, tidal and solar.

The chart below is an indicator of theoretical or long-term potential. 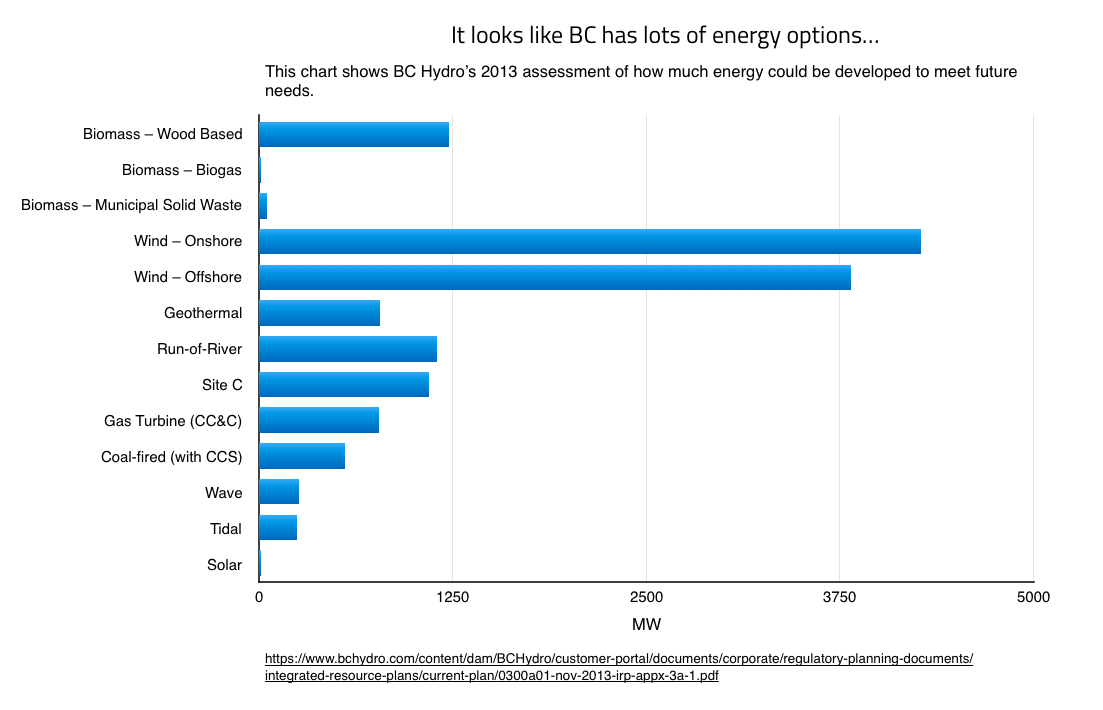 6. Of the options it has for new power supply, Site C is the cleanest option and the second least expensive.

This chart based on BC Hydro regulatory filings shows predicted cost ranges for a whole variety of electricity generation options. Site C is not the cheapest, that distinction goes to natural gas employing efficient combined-cycle technology. Coal comes in at the same cost as Site C. Biomass, at the low range, is also competitive with Site C but it also has the potential to be much more costly. The obvious appeal of Site C is that it is the second cheapest option with little risk of cost spiralling, and it is the cleanest of the low-cost options.

The data in this chart will no doubt change over time. The cost of solar is said to be dropping. The price of natural gas is also dropping due to market conditions and the ever-increasing efficiency of hydraulic fracturing and multi-directional drilling technology. Biomass (wood waste in many cases) is subject to supply factors. 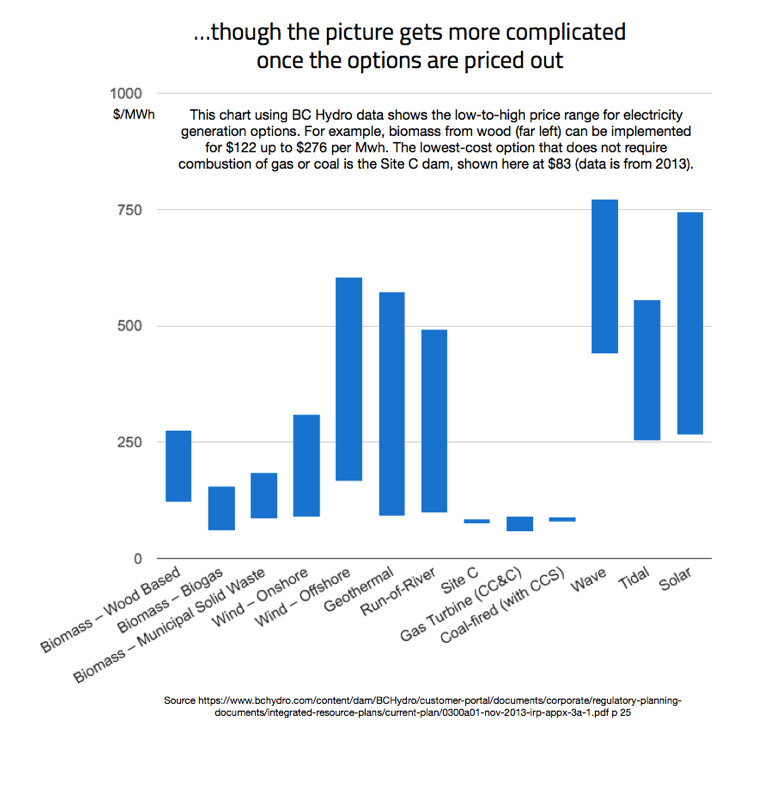 Since wind has to be backed up because there is at present no large-scale battery technology available, there will also be additions of hydro and natural gas. Chart is from National Energy Board of Canada outlook for 2016. 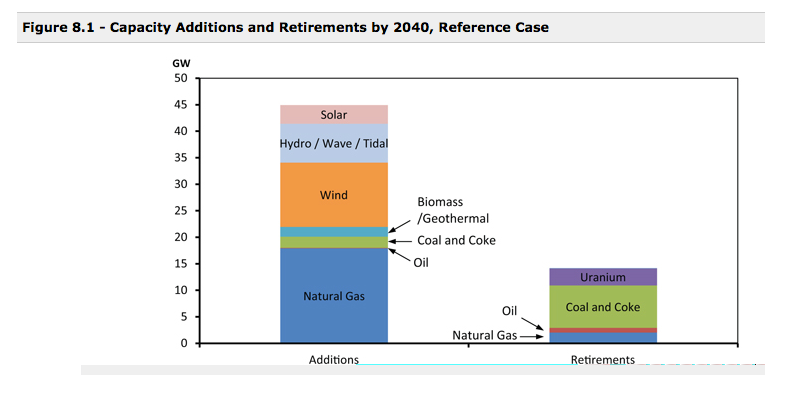 8. More electricity will definitely be needed in future, both in BC and in Canada overall.

Based on this chart from BC Hydro's 2013 forecast, it seems like 2024 – the date Site C is supposed to come onstream – will be poised to bring immediate reprieve from an electricity deficit in BC. Having Site C in place would send the province back into surplus country for a few years. 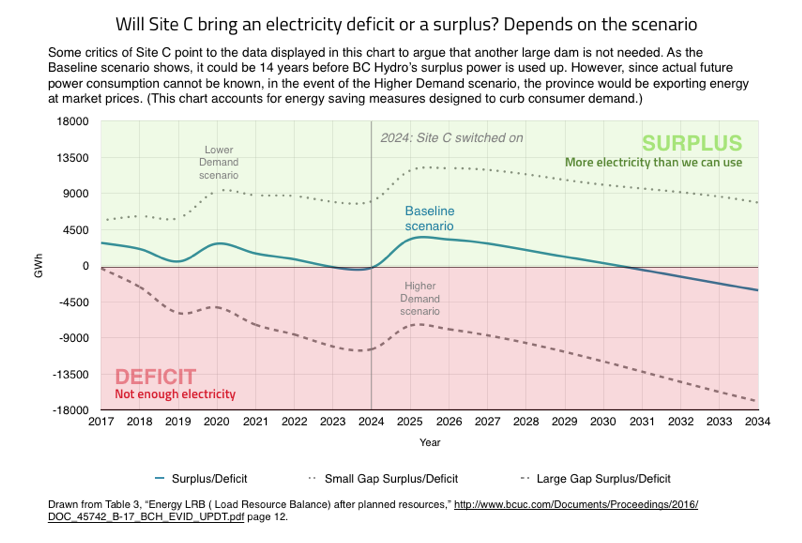 Some are saying this data is now out of date and that a fresh look would prove that the new power won't be needed until later. That is speculation. With low growth in industrial construction costs because of the oil-and-gas and mining downturn, now is a smart time to build a major infrastructure project if you are concerned about price escalation, and this presumably was a decision factor in moving ahead with the project when BC Hydro made the decision to do so. (This Statistics Canada table proves that costs are low at the moment.)

9. In the event that Site C was used to lower oil sands emissions, it would do more than any other studied option to accomplish that. 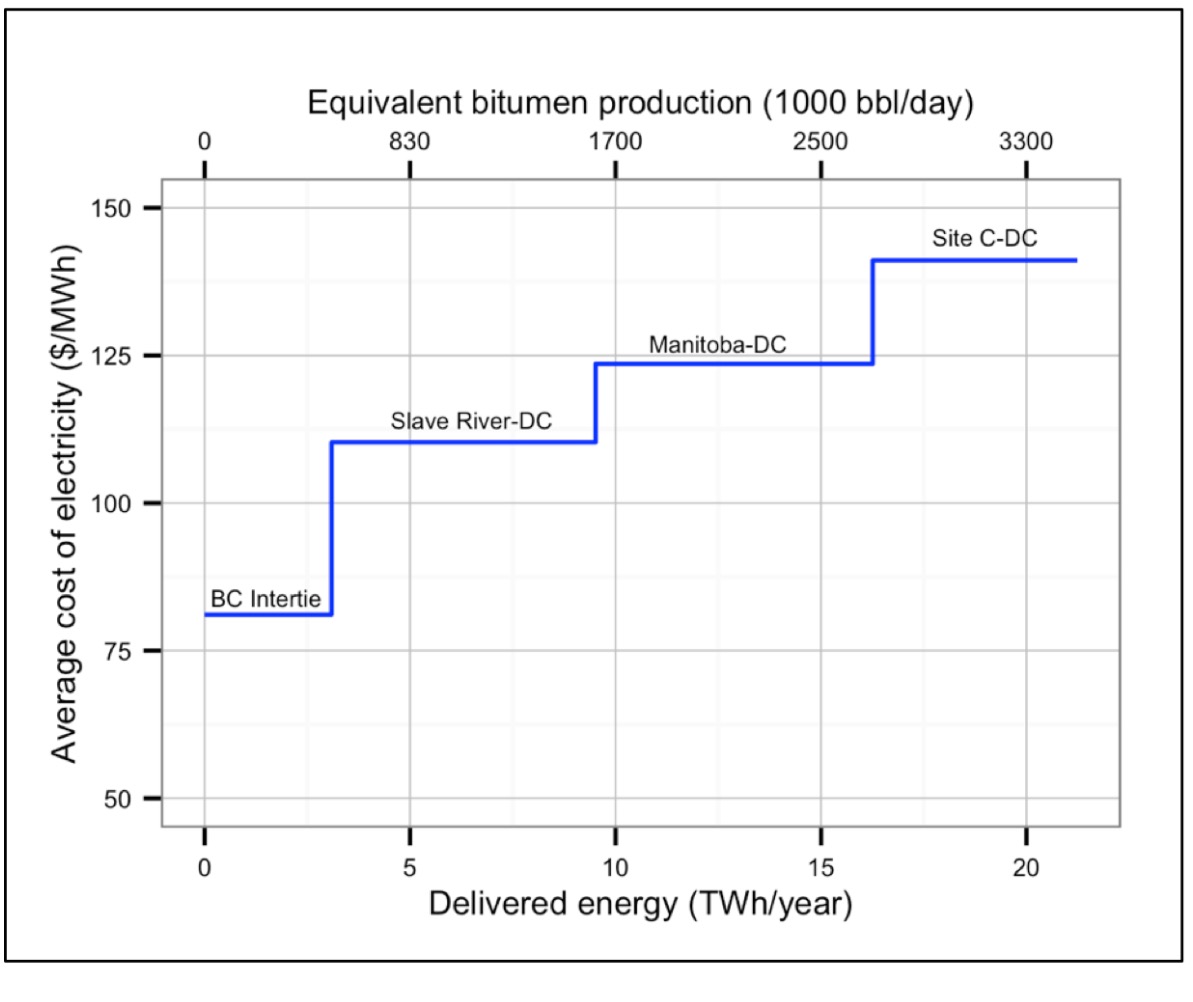 This chart is from a January 2016 study by the Canadian Energy Research Institute. It shows that of the options looked at to provide green power to the Alberta oil sands, Site C was the one that could potentially provide the greatest amount of power. Although supplying energy to Alberta for this purpose was not the plan for Site C, the fact is the idea is being studied. Hydro electricity would be most useful in a new type of in situ extraction using electrical current to melt bitumen underground and pipe it to the surface.

10. "Big hydro" is not an outdated technology.

In fact, hydroelectricity is an extremely flexible technology for power generation. Hydro reservoirs provide built-in energy storage that do not require replenishment of costly and polluting minerals like lithium. And since water-driven power is one of humanity's oldest sources of energy, we know we don't have to wait around for someone to invent a way to store up energy for use later: we already have that and it's called a dam.

Furthermore, the fast response time of hydropower enables it to be used to optimize electricity production, meeting sudden fluctuations in demands.

Canada has a strong hydro technology export sector, which also belies the perception of datedness. According to the Canadian Trade Commissioner Service, research has included turbine design to protect fish, development of modelling software, resource assessment data, and product and services along the whole value chain.

A desirable proven technology does not need to be discarded just because we also have new technologies. With 475 hydropower plants, this sector is the "oldest and best established green industry in Canada". Canada is the world’s second largest producer of
hydroelectricity, and has still only tapped about one third of its potential hydro resources. To call this "outdated" ignores the fact that it is a durable, proven solution that will increasingly be developed around the world.

According to the U.S. Energy Information Administration: "Among renewables, installed hydroelectric power capacity is expected to increase more than other renewable sources between 2008 and 2035. However, installed solar power capacity sees the largest growth rate over the projection period, expanding 8.3% per year, based on EIA's IEO2011 released on September 19, followed by 5.7% for wind, 3.7% for geothermal, 2.0% for hydropower, and 1.4% for other renewables such as wood waste, landfill gas, and agricultural byproducts."

Charts are from this source.

After reviewing the available information, it's hard to see how a credible case could be made to oppose Site C on the basis of cost, reliability or effectiveness in creating electricity in a responsible manner.

There are some governance and legal questions (i.e., over whether the project should have been referred to the British Columbia Utilities Commission; the outcome of First Nations court challenges). These will undoubtedly shape how provincial politicians square off. But if you had to judge Site C by how clean, cost-effective and dependable it will be, the evidence strongly supports having it in place for long-term benefit.

Stewart Muir is an award-winning author and journalist. In 2014, he founded the Resource Works Society as an impartial, non-partisan project to build awareness about responsible natural resource development and use.