A treasure trove of images from the Vancouver archives shows how  consumers over the past 100 years were sold on the benefits of switching from coal and firewood to a clean, modern fuel 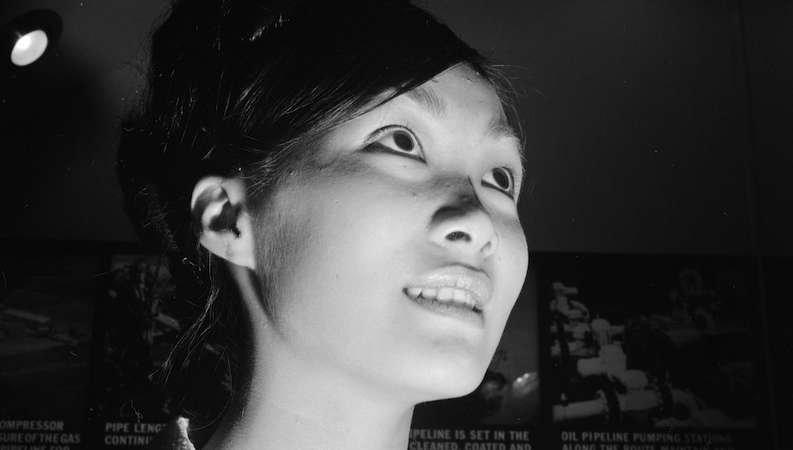 The fact is, residents of Vancouver had been fascinated by the possibilities of gas for at least 50 years before the glamorous Susan Lew (pictured here) became the face of natural gas at the 1967 Pacific National Exhibition.

As early as 1914, promoters of gas as an energy alternative were touting their product as a way to avoid the stinky fumes of coal and firewood.

This photo shows a pair of parade floats sponsored by a gas company. 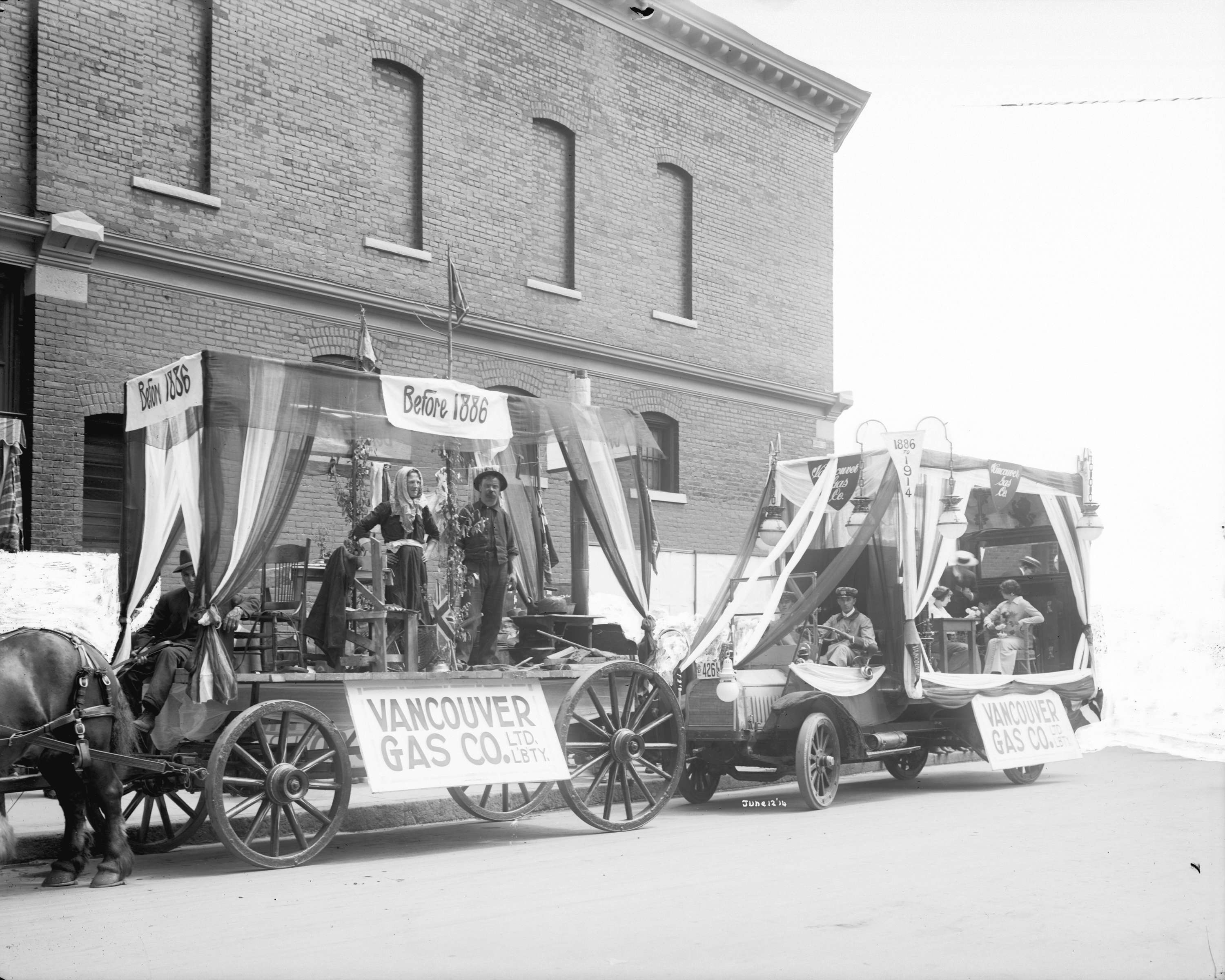 On the left, we see a depiction of the "bad old days" before gas. The stove is fired by wood and the mismatched chairs look pretty rickety. The sign says 1886, which is when the City of Vancouver was founded.

Let's take a closer look at the couple on this horse-drawn float. 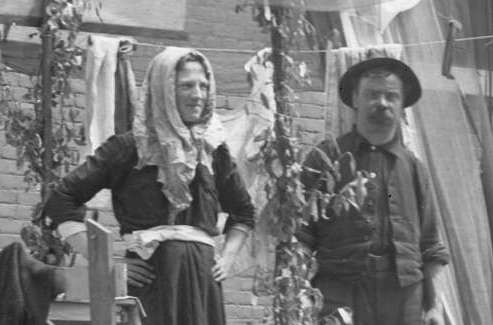 Rustic times, those 1880s, as seen by the modern Vancouver perspective in 1914.

Or was it just that by 1914, when this parade took place, all the men had gone off to war? The man on the right looks kind of puzzled although given the walrus 'stache, it's kind of hard to tell. Such was life before electric lighting, but then Vancouver has always been a place ahead of its time.

But seriously, let's also have a closer look at what is happening on the right, in the modern diorama. 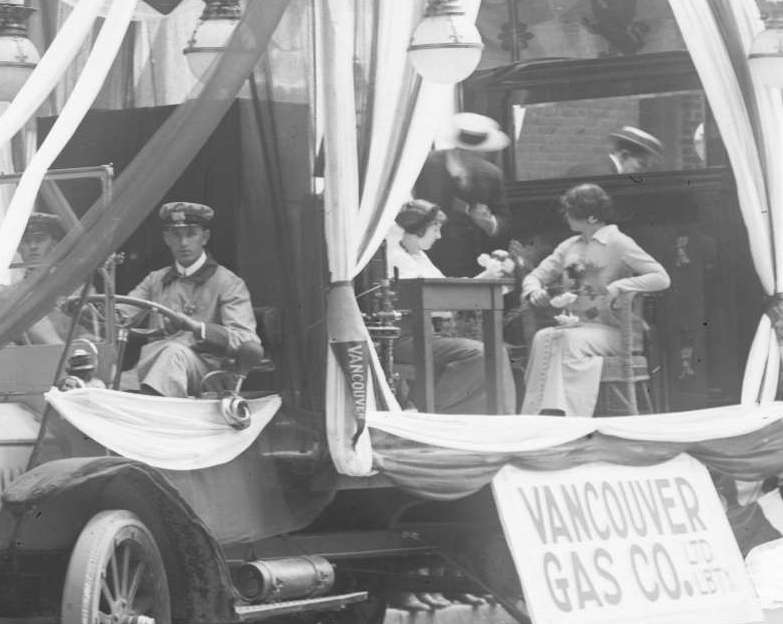 What we have is a much better living situation, and clearly the story is that gas has something to do with progress.

First of all, the float depicting the new era is on the back of a truck with some nicely liveried men up front. A nattily attired chap in a straw hat stands beside two seated ladies who seem to be busying themselves with flower arranging. Lamps – no doubt powered by gas – are hanging around the outside of the moving exhibit. 1914 - could things possibly get any better? The whole thing is, judging by the signage, sponsored by the Vancouver Gas Co. Ltd.

The archives didn't have anything from the 1920s. Was the city too busy with the Charleston craze to do gas in this period? Who knows. The next time we see gas publicity efforts come up is in 1932, and like most of the ones that follow they were part of a decades-long PNE tradition to promote the use of gas. 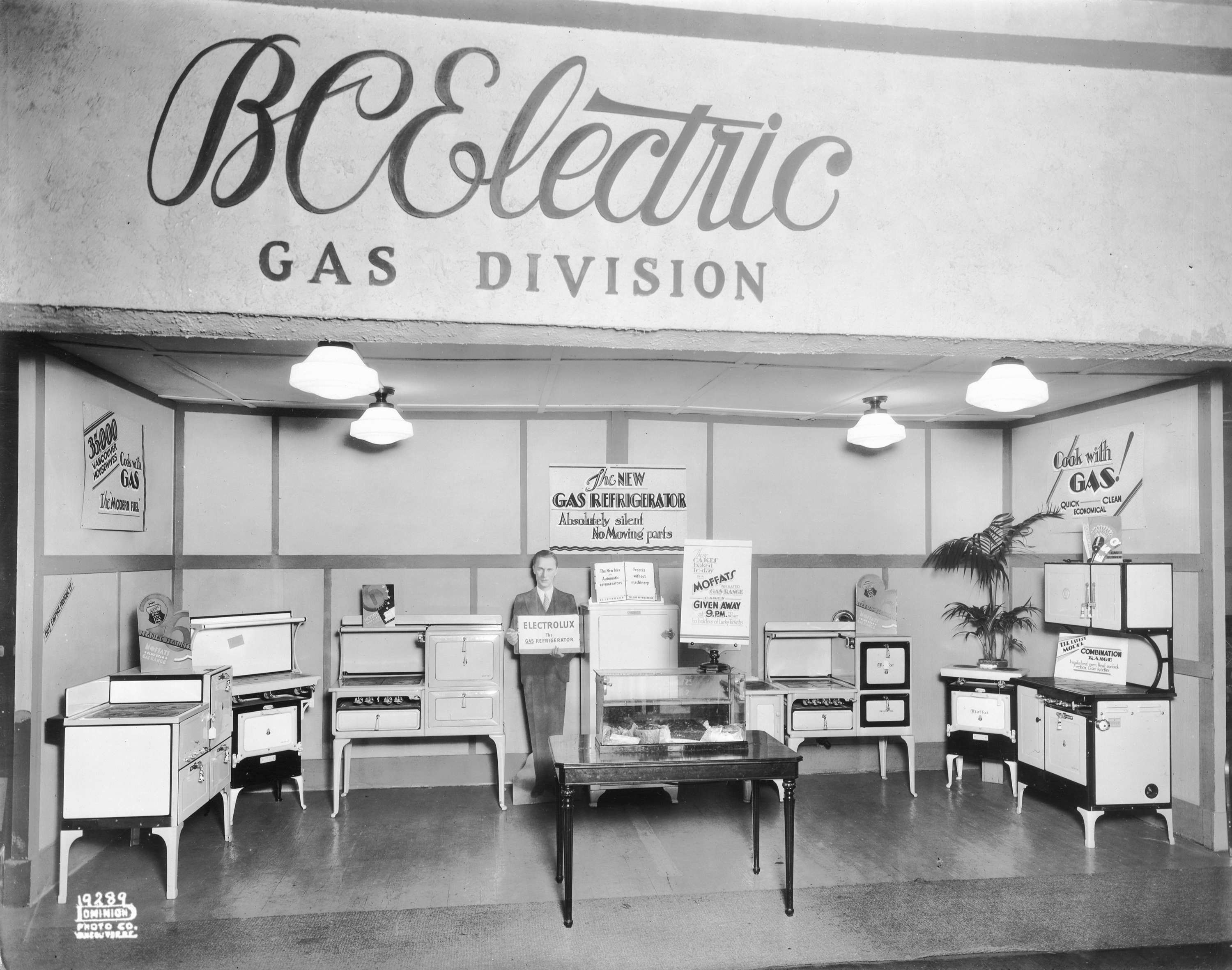 What we have here is some kind of promotional exhibit. The hot item of 1932 seems to be the gas-powered refrigerator. Somehow that does not sound like a smart way to cool your food –  it's no wonder that never caught on in the home.

Here's another photo from 1932, this one touting another modern marvel: air conditioning. Was there anything gas could not do? Yes, there was: come up with "poetic" slogans that made sense. "Your winter's kindling/when you heat with gas." Even in 1932, that stinker should have been sent back to the copywriters.

One year later in 1933, and, holy cow, look at the same exhibition. 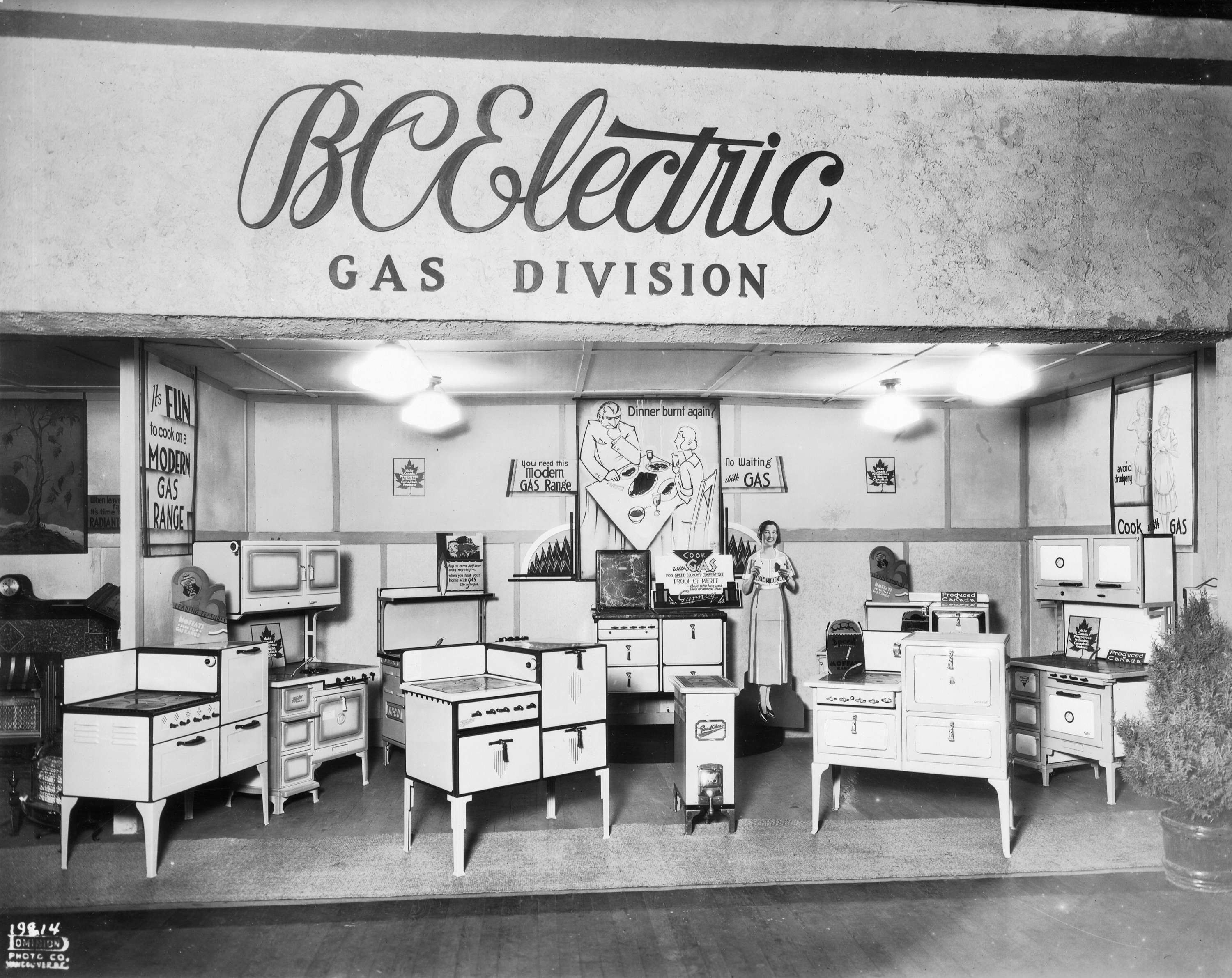 There is really no change to the basic stage but just check out the inventory of cool appliances! The advertising pitch is really simple and clear. Consumer, here is your problem: "Dinner burnt again?" Solution: "You need this modern gas range." And don't miss those little signs bearing the maple leaf: "Make Canada Prosperous by Buying Canadian Products" - now there's a message that resonates across the decades! 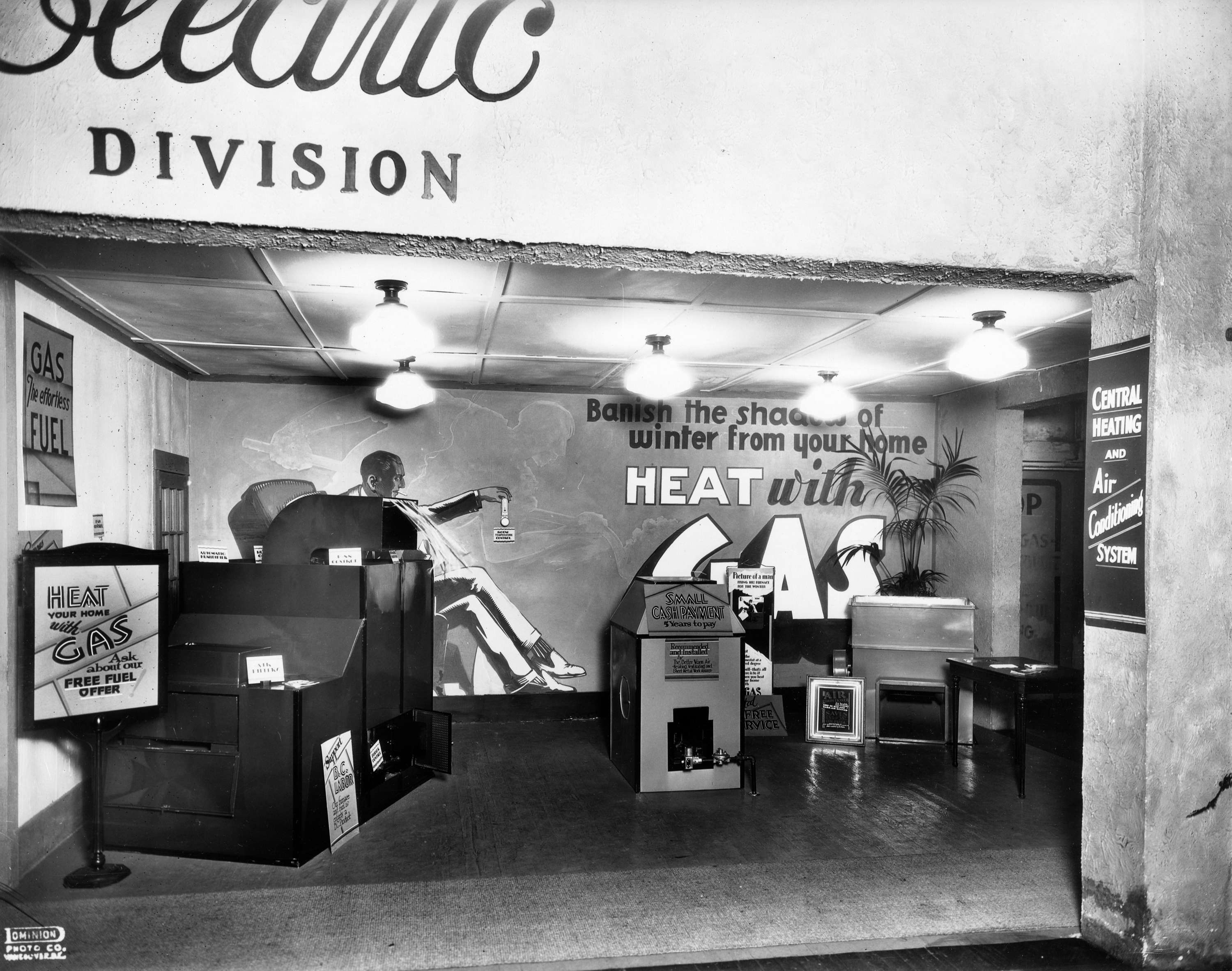 It shows the heating part of the same exhibit. Look at the wall picture showing a man shovelling coal into a furnace. At the time of this picture, that was a common thing to have to do in Vancouver, and older homes were commonly built with coal storage rooms in the basement. The man in the nice comfy armchair is, by contrast, living the modern 1930s dream. Look at him – he is able to sit back, smoke his cigarette, and fiddle with the thermostat. Luxury!

By 1935 it was the depths of the Great Depression. The gas company's PR men must have known there were hungry children about because for that year's publicity campaign they decided giving french fries to kids was the way to build interest. And sure enough, look at those waifs clutching their chip baggies waiting for delicious hot gas-cooked fries to be dished up. 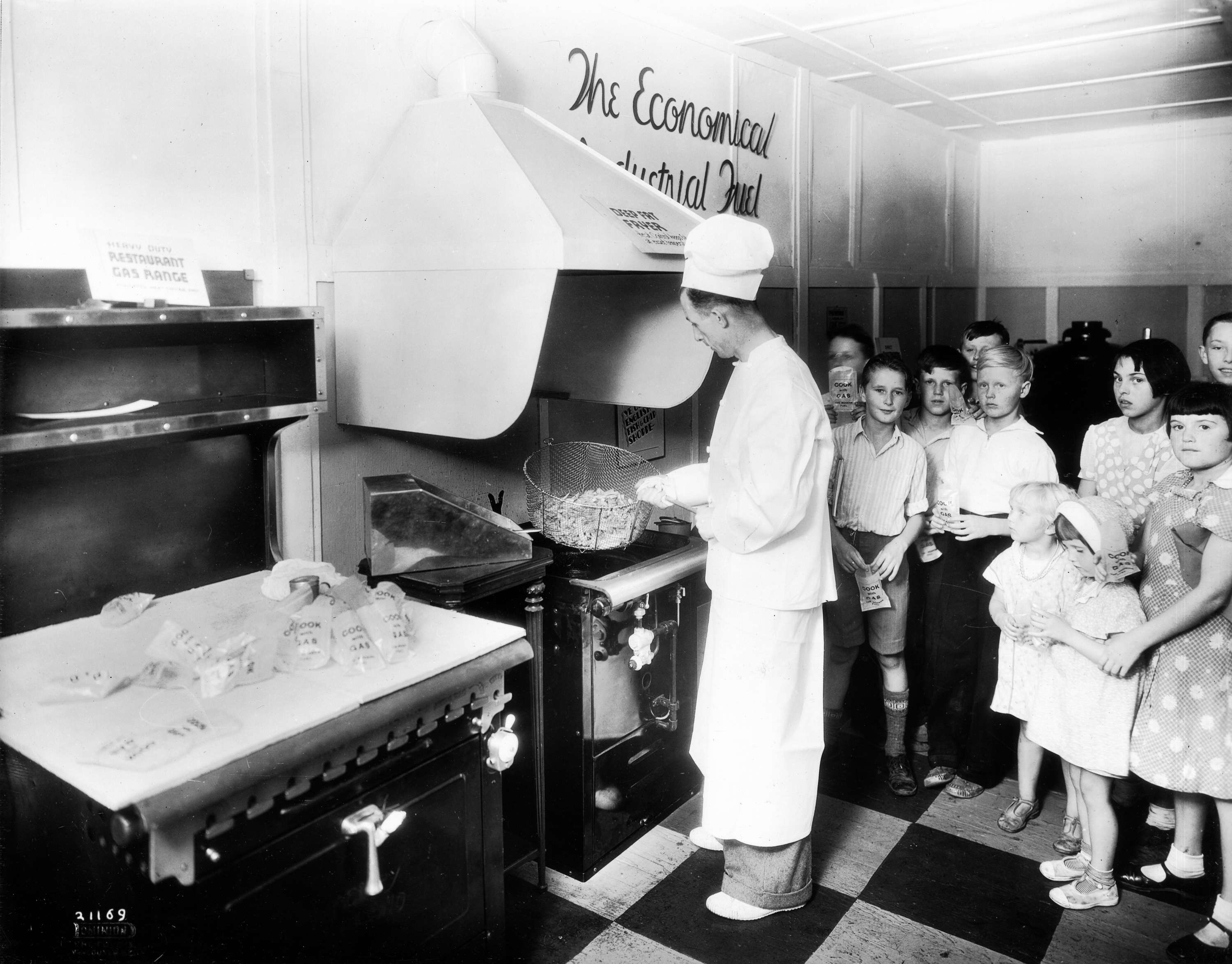 They are plainly ravenous! But the coolest thing by far in this photo promoting use of cooking gas for restaurants is the chef's pant leg. Check out that cuff!

By 1940, the strategy of the gas promoters had taken a dramatic turn. No more relaxed smokers and tantalizing merchandise on display – those frivolous times were in the past because, after all, there was a war on. 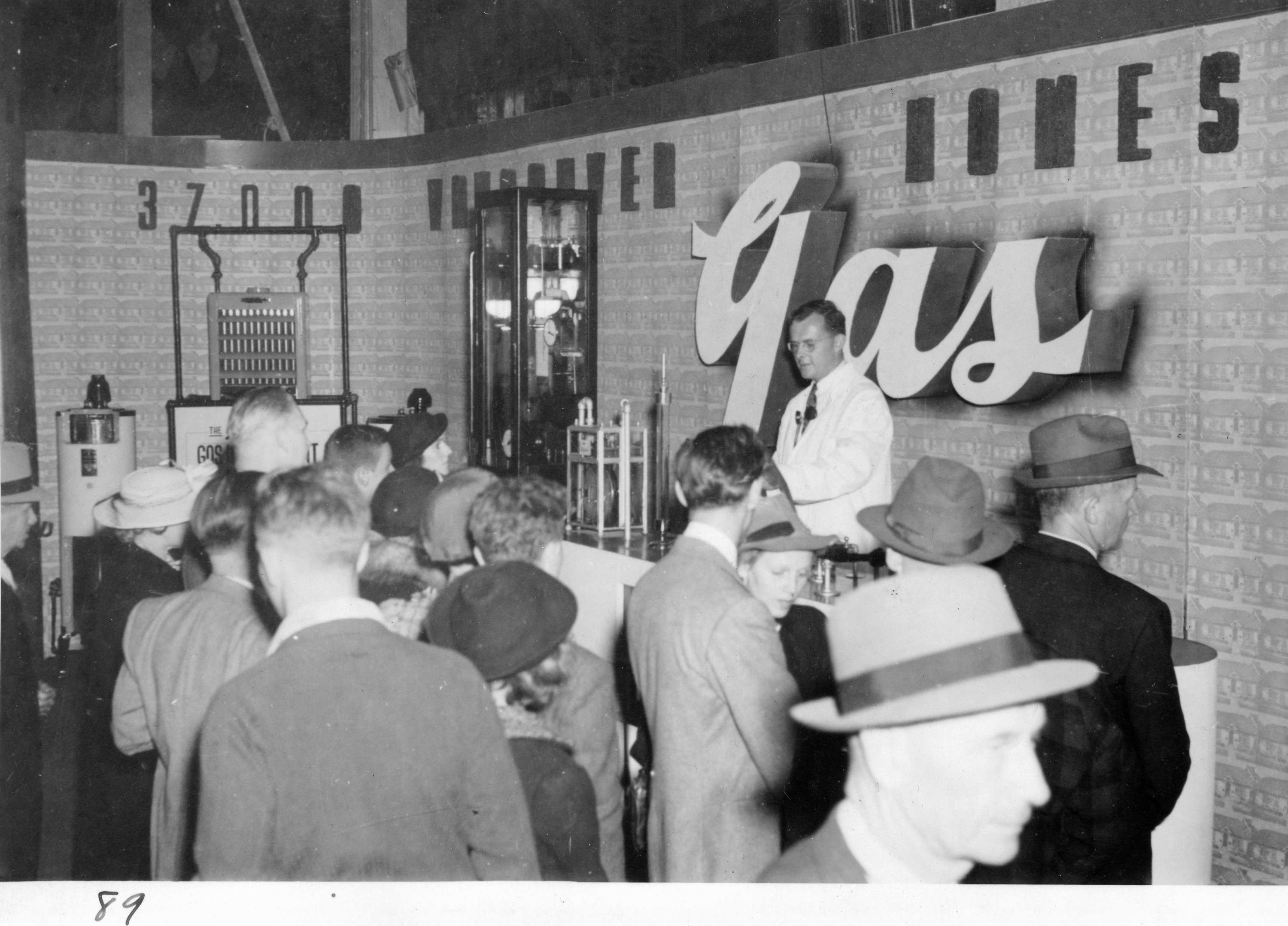 Men in white coats and brass contraptions were now the rage. Safety and science were, it seems, the new emphasis.

One year later, the white coats were gone and the earnest professor type is replaced by two men in dark suits with five o'clock shadows. 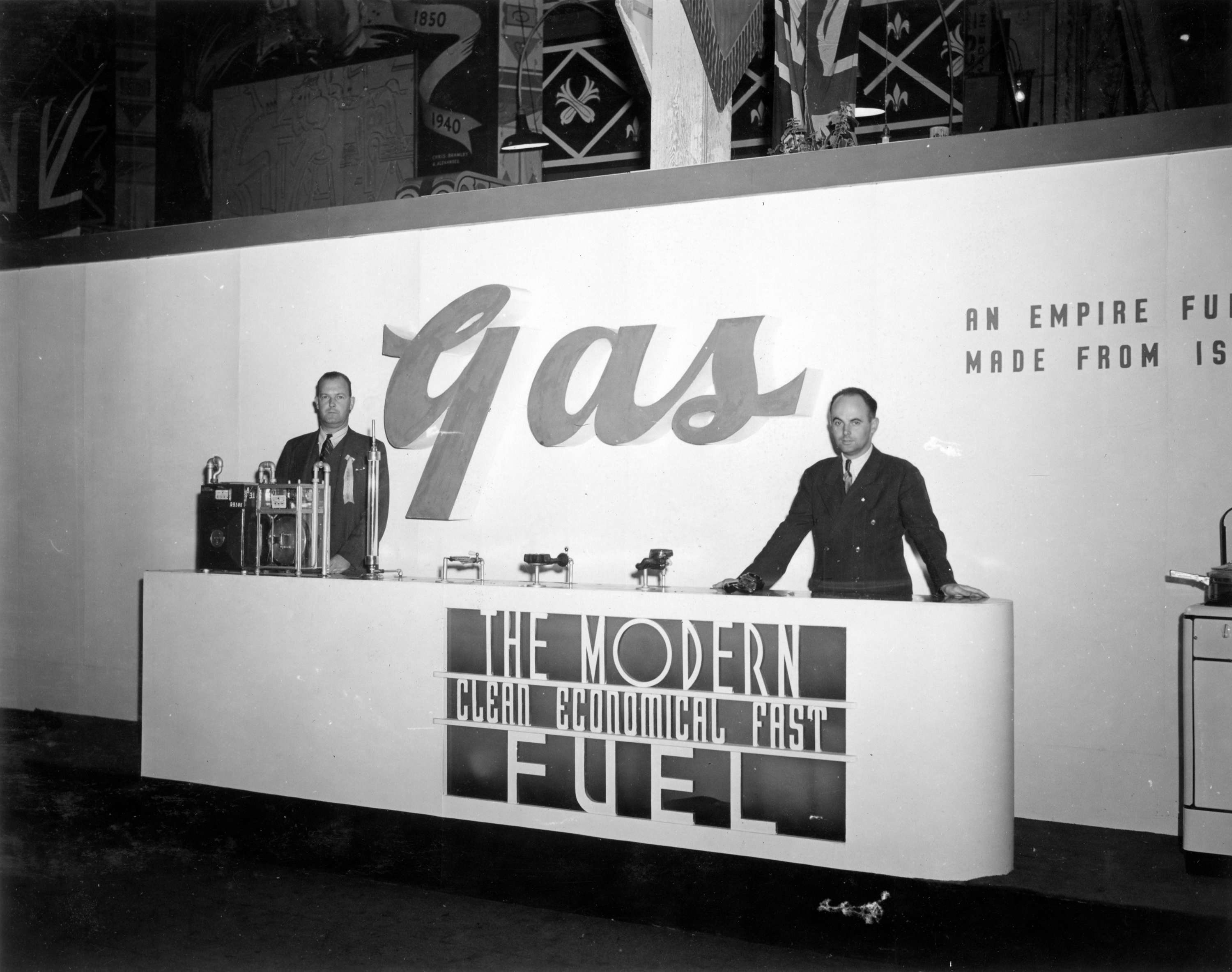 What, the clean-shaven ones were called to the Army? These shifty characters were left in charge of the Bunsen burners and gizmos, which seems really ill advised. 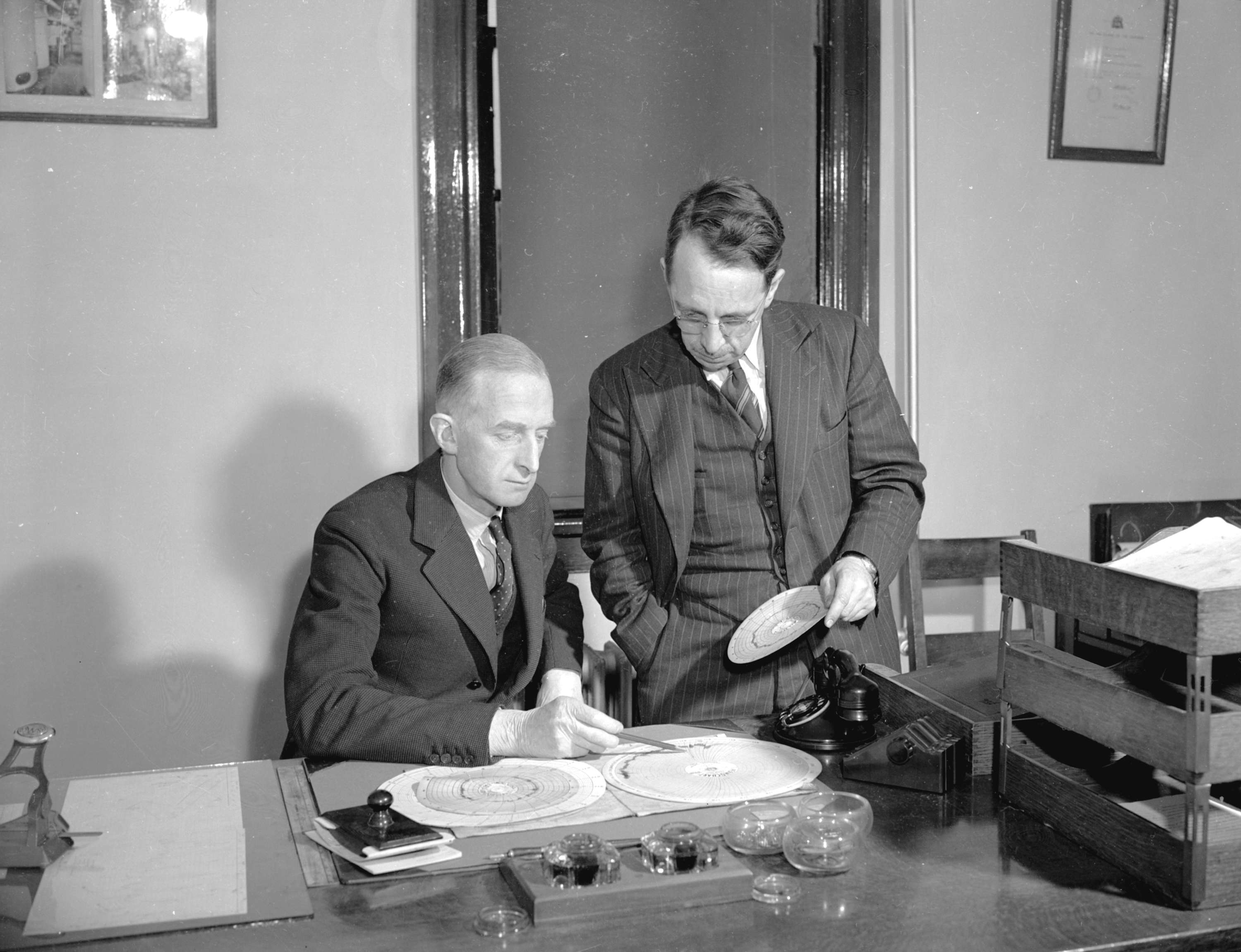 And a pencil, to point with.

The 1950 PNE parade was a time to celebrate gas as a way to run big power stations creating electricity. 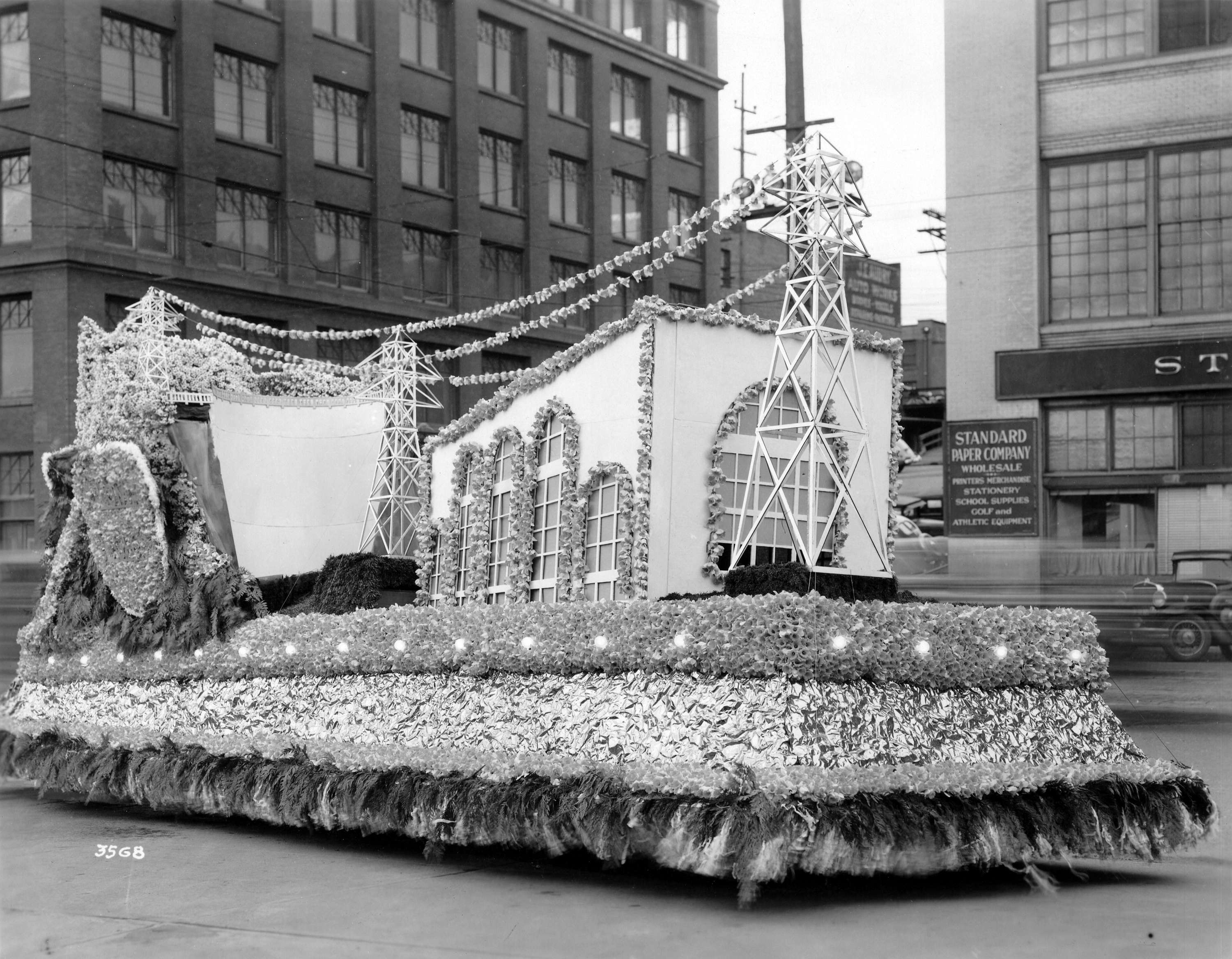 This photo of men standing around in heavy overcoats in front of a pretty lame exhibit is from the 1960s. 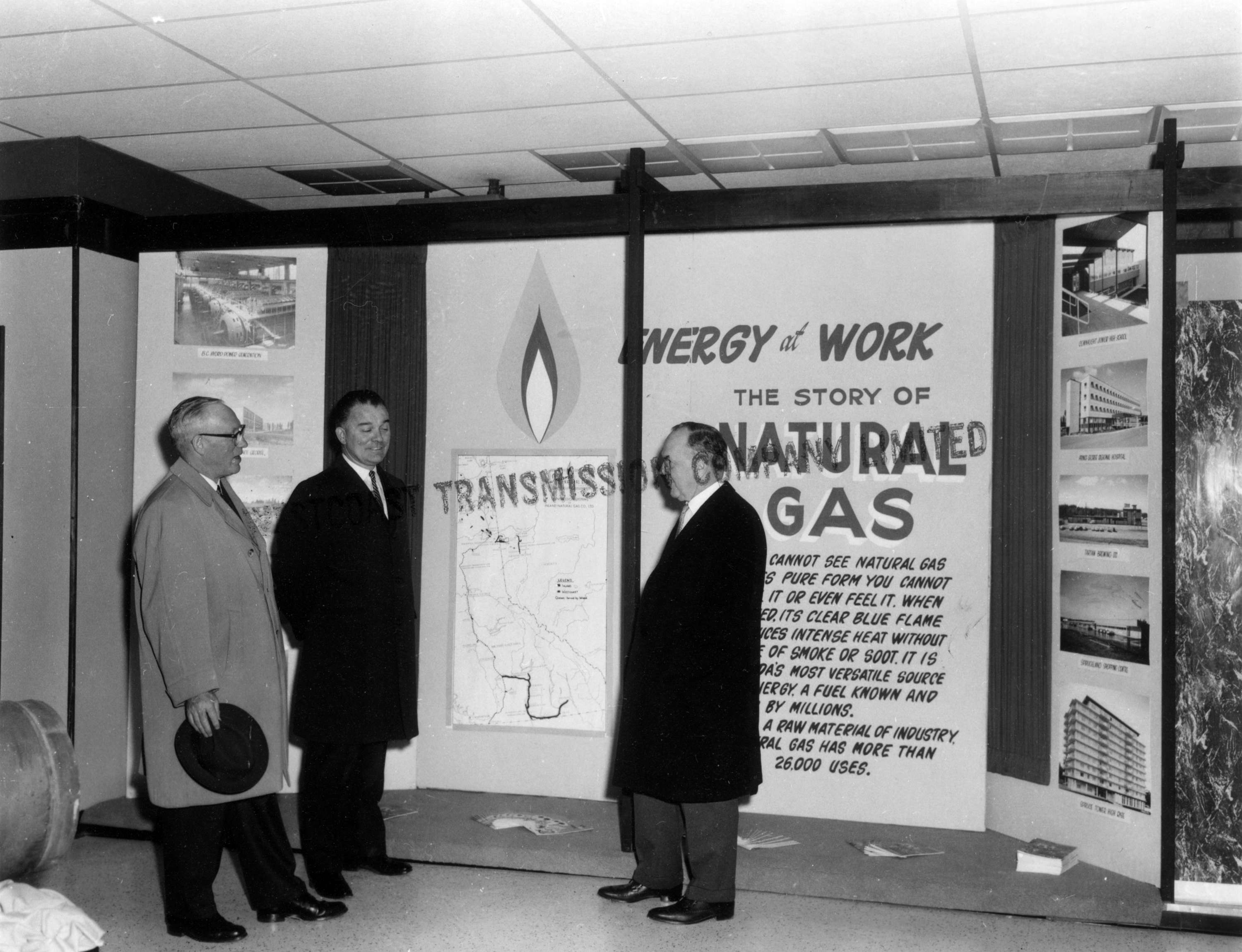 What's going on in this photo? Someone has said something that the man in the middle thinks is funny, but the gent on the left does not seem amused at all.

But something much bigger is actually going on here. Notice is this is also the first picture to use the term "natural" gas – a change in marketing strategy as well as the commodity itself. "Natural gas" came about because of the transition from coal-gas to gas that was drilled out from the ground.  Gas from coal was "gasified" or "manufactured"; "natural" gas was originally called "nature's" gas, because it came from nature and was not manufactured in a dirty gasifier like coal gas. So what the shift signals is that British Columbia was commencing to talk about gas in a new way because of a fundamental shift that was clearly underway at this time.

The signage at the back runs through the various attributes of natural gas, including the extraordinary claim that it has 26,000 uses.

In 1967, the PNE gas exhibit emphasizes cooking. Whatever the other 25,999 uses are, this stage display gives no clue. 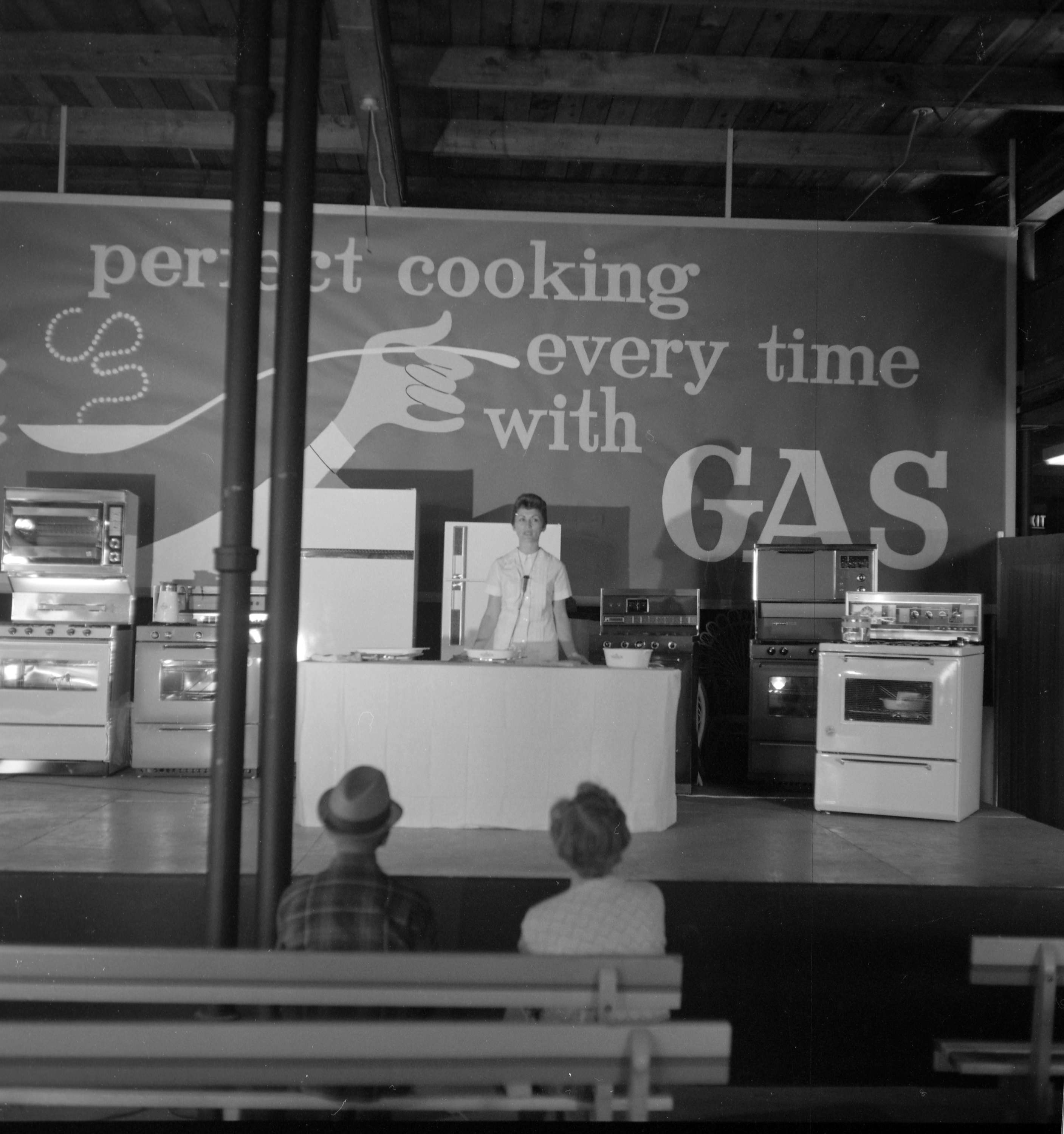 "Perfect every time" - a subtle shift from the 1930s messaging of "Hey Martha, what are you doing burning my dinner again?!" The audience (the model's Mom and Dad?) are rapt with attention, just lapping it up.

1967 was the year that telling the Vancouver public about the desirability of natural gas kicked into high gear. It was when BC's North East was taking off as a production area for gas – as it still is today. The young woman with the glam beehive hairdo is Susan Lew, who was photographed all around the extensive gas exhibit of 1967. 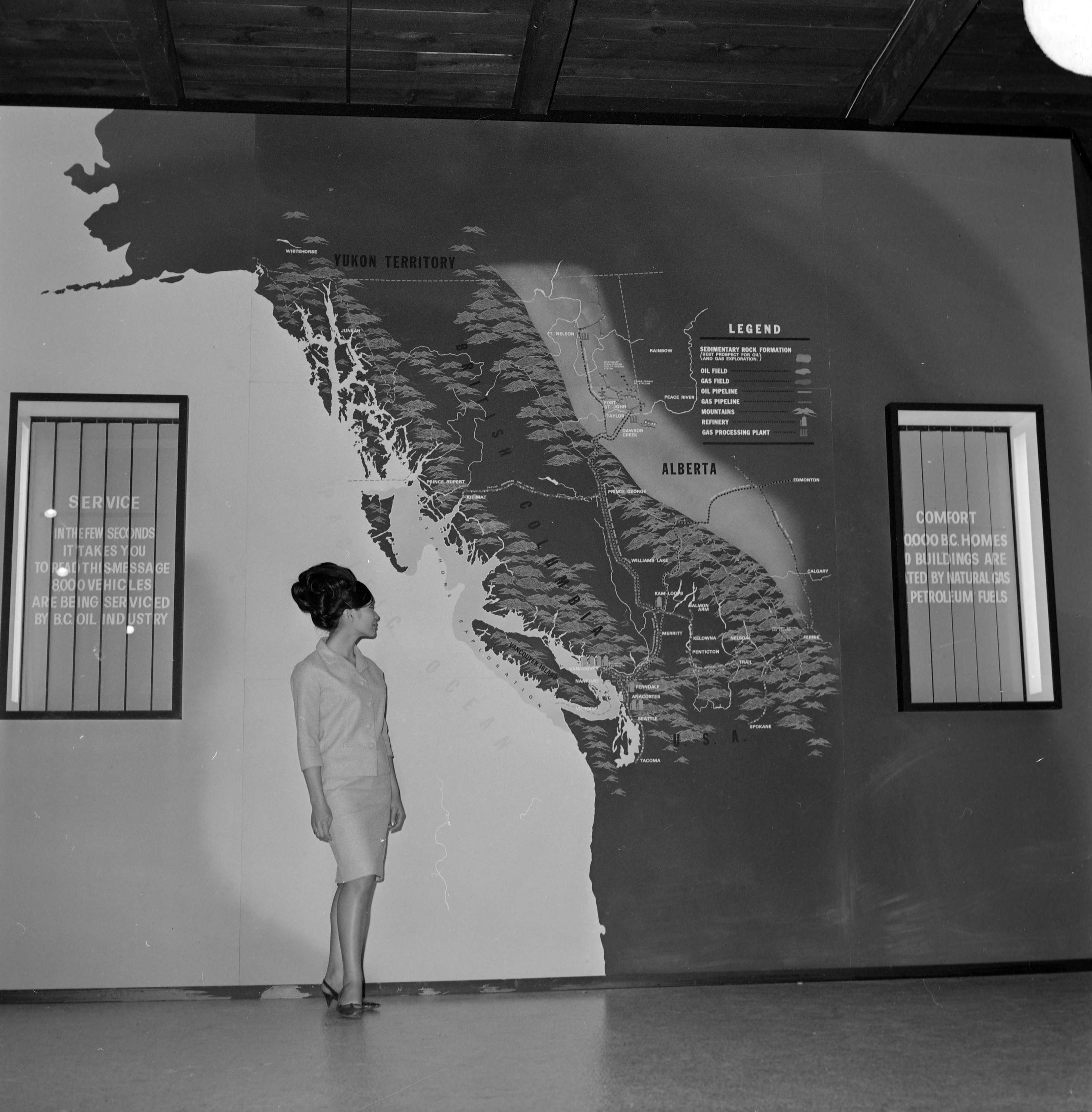 Here, she is beside a huge map of BC showing pipeline and extraction infrastructure. A big vision for building British Columbia - that's the 1960s for you.

This next photo shows a pretty racy scene. 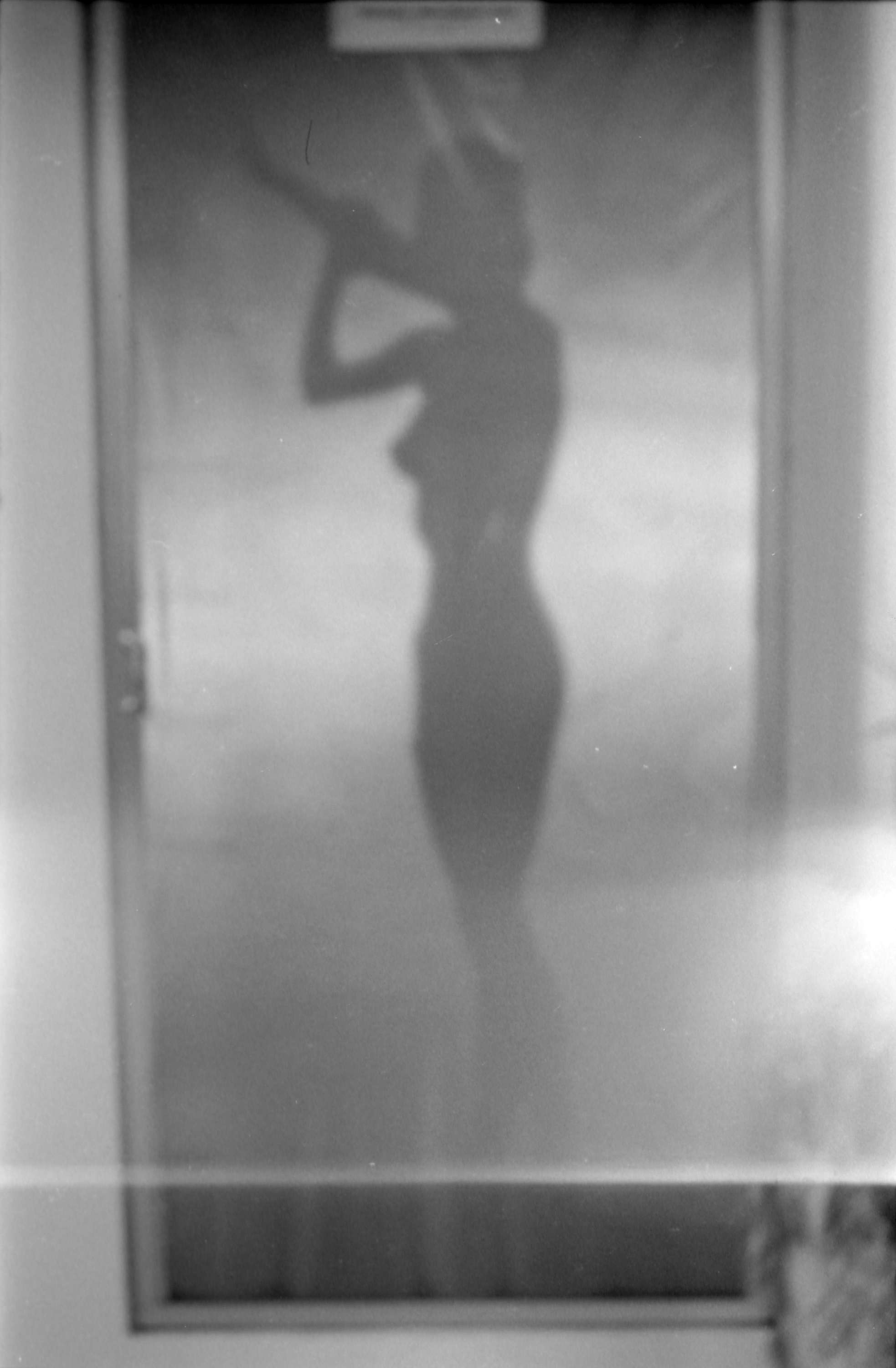 It's real model in a shower, touting the benefits of hot water from natural gas. It's the late 1960s, remember. You could imagine a silhouette like this at the start of a 60s-era James Bond film. (Possibly this explains why there was no crowd at the kitchen display - they were all over here.)

What does the future of natural gas hold? That seems to be what Ms. Lew is contemplating in an eerily lit shot from 1967, Canada's centennial year. Let's get another look at that photo, also seen at the start of this article. What is she thinking? 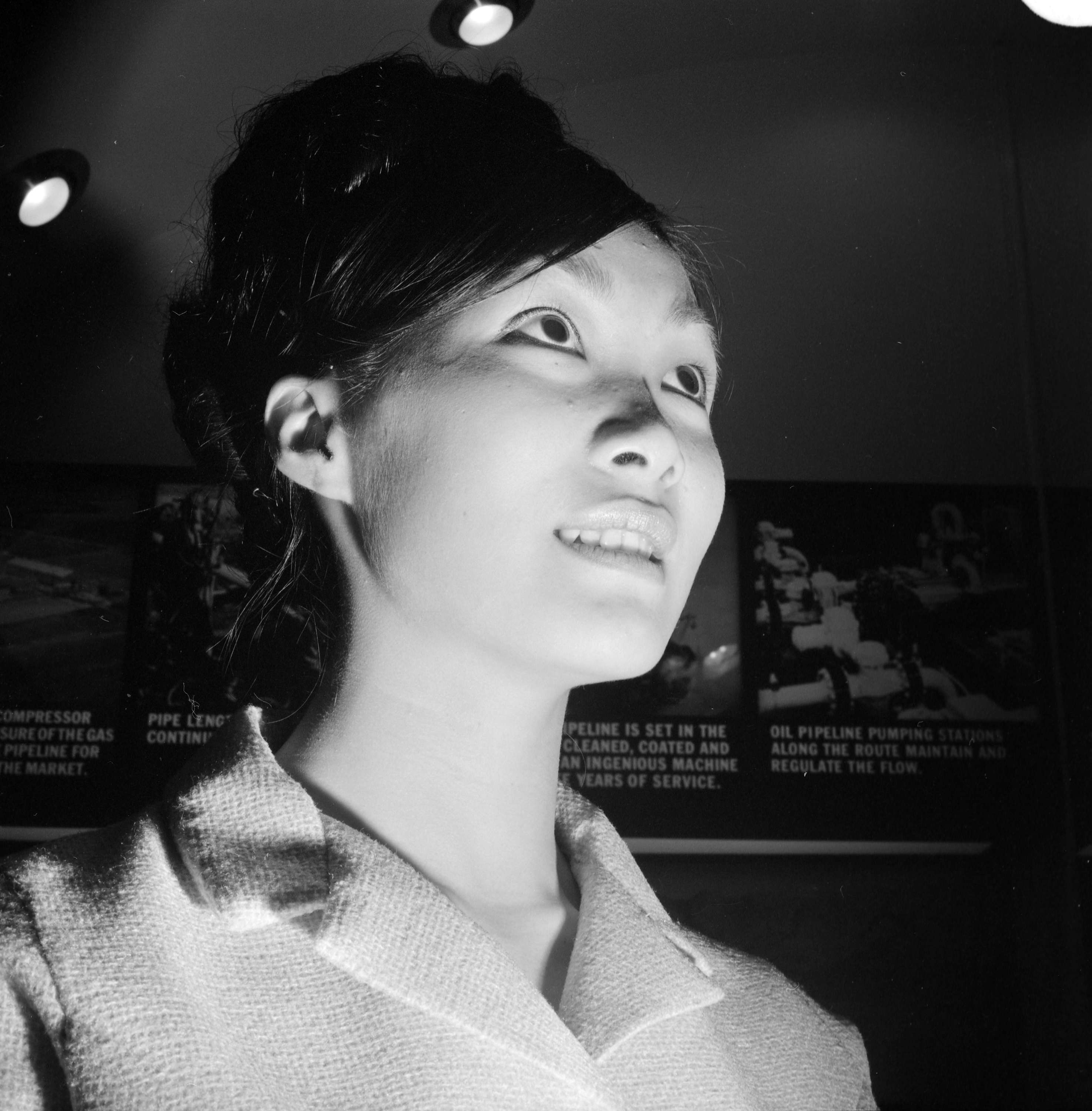 LNG? No, she probably had no idea what LNG was. Back in the 1960s, it would have been surprising to hear that Malaysia, India, Japan, China, and other Asian countries would one day want to get their own supply of BC natural gas, a commodity that has been the subject of a lot of storytelling over the past 100 years.

But that is what is happening with LNG (liquefied natural gas). Within a few years, it's likely that this clean alternative fuel will help to make smoggy Asian cities better places to live.

Fifty two years after this photo, we are still waiting to find out what the future holds. But that's just one of the hazards of living in the present.

All the photos here are courtesy the City of Vancouver archives and accessed from their searchable online database: http://searcharchives.vancouver.ca/