Our unacceptable ignorance about labour shortages

There is a longstanding, legitimate fear in Western Canada that there will not be enough workers to fuel imminent economic growth. It’s a shame we don't know what we're talking about

I don't mean to say our worker-shortage fears are wrong. There are many signs pointing to imminent and severe labour shortages that could cripple big development projects, particularly in the resource sector. This worries us because we rely on such projects to help us adapt to things like our aging population and an increasingly competitive global economy. Check out how the western provinces stack up compared to the rest of Canada in terms of labour shortages. 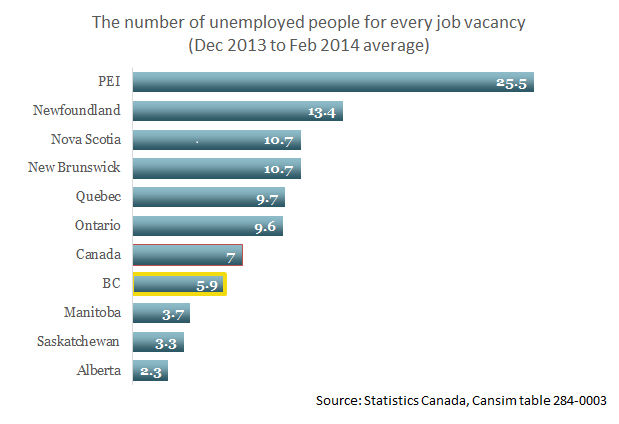 The BC government expects a million job openings by 2022 (example here). For context, the entire BC labour force in 2013 was just over two million people. Another million jobs is a colossal order to fill for a small region like ours. And we should by all means try to get ready for the challenge. As you can see, BC’s rate of labour shortages has dipped below the Canadian average in the last two years. 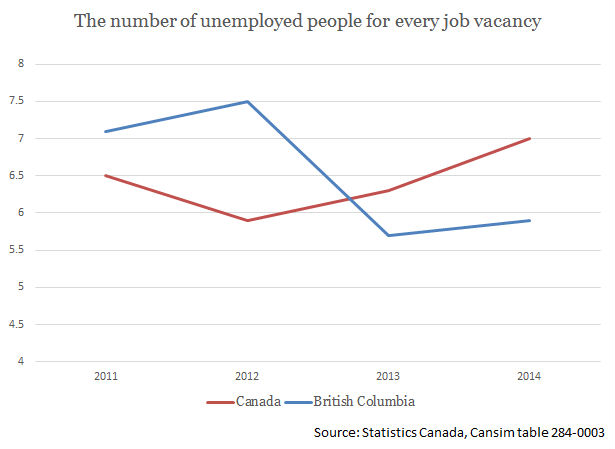 But, all the same, labour markets are flexible. When labour’s scarce, wages go up. Workers flood in from other regions. Employers invest in labour-saving technology. Some project get delayed by a few years. Other projects merge, or move elsewhere or simply die off. In other words, people adapt. Who knows what the real situation will be in 2022, or even 2016 for that matter.

Understanding what we don’t know

But forget long-distance projections for now. According to a new report by Don Drummond, the prolific former TD Bank chief economist, we don’t even have a good idea of what’s happening in our labour markets right now. (Although hopefully the $14 million a year announced recently by the federal government to fund two new labour-market surveys will help.)

The chronic lack of good data he describes is shocking considering how pressing an issue labour shortages are. We've been listening to doomsday scenarios for years that Canada faces imminent country-wide labour shortages, although recently those stories have moderated slightly, focusing instead on region-specific shortages (which the Statistics Canada figures I used above don't help us with).

Then there's the confusion over the rate of job vacancies in Canada. The federal Conservatives made a big deal of their job-vacancy estimates in their most recent budgets, notably quoting figures that were three times higher than those from Statistics Canada. They were later called out for relying too much on data from free online classifieds sites such as Kijiji, and they've sinced stopped using those figures.

Assigning blame in the confusion

Despite all the uncertainty about what’s really going on, a lot of energy seems to be devoted to assigning blame. The government is blamed for restricting immigration, or for limiting the use of temporary foreign workers (or, alternatively, for allowing too many temporary foreign workers). The business community and others have taken to blaming the education system for producing too many graduates with unneeded general arts skills and not enough practical job-ready skills.

And then there are those who point the finger at employers themselves. This has included no less than Harper’s own Employment Minister Jason Kenney, who has frequently challenged employers for not doing enough to address their own labour needs. Here’s a good example: “We are distressed that wage rates have barely kept pace with inflation since the global downturn, which is not indicative of a tight labour market. We are disappointed that Canadian employers invest less than virtually any other developed country in training.”

But maybe we should just figure out what's really going on

It's perhaps no surprise that the economist Drummond thinks that the problem can be solved with more data – the perennial perfect solution of wonks. But he makes a compelling case that good information on a topic this important could change people’s behaviour in beneficial ways.

Students would use it to help them choose studies in areas that are in demand (and get some realistic expectations of what they might experience after graduation – a shocking concept!); employers would adjust they recruitment and training programs to better serve the workers they want to attract; schools would use the information to reprioritize their programs to reflect realities in the labour market; and if governments decide they need to step in and mess around with labour markets, they could at least do so based on a bit more evidence.

And lest this sound like a miracle cure, Drummond writes the following: “Good LMI (labour market information) is not a sufficient condition for effective matching of skills and labour market needs. But it is clearly a necessary condition. Good matching cannot occur if the agents – individuals, businesses, educational institutions and governments – do not have a clear idea of what skills are required.”

What to do about it

Drummond’s recommendations boil down to two main points: give Statistics Canada the resources to collect solid regional labour market information, and put a single agency in charge of the job. In short, the work needs to be done properly and someone needs to be clearly accountable for doing it. New funding announced recently by the federal government to beef up Statistics Canada's survey work is a promising sign. It remains to be seen whether the feds will also adopt Drummond's governance recommendations.

These seem like altogether sensible steps to take. Consider, for instance, how controversial the policy decisions tend to be when governments try to correct problems in the labour market: things like changing immigration policy, creating temporary-foreign-worker programs or reforming post-secondary education. These kinds of things may be necessary in many areas, but the decisions should be based on better data than we have now.