For months now, a pressure campaign has been underway in the woods west of Victoria. Logging roads that exist to allow forest companies to carry out permitted harvesting work have been blockaded by interest groups. Their argument is that this is the only means available to prevent logging in what they say is southern Vancouver Island's last intact old-growth forest, the Fairy Creek watershed. Much has been made of this claim, for example in the British Columbia Legislature on March 25, 2021. That's when Sonia Furstenau, BC Green Party leader, stated:

"Today the B.C. Supreme Court is hearing forest company Teal-Jones's application for an injunction against the protesters at Fairy Creek. If the injunction is granted, we could see people arrested for attempting to stop preparations for logging in the last intact ancient forest valley on southern Vancouver Island."

Here is Fursteneau underscoring that point on the same day:

The claim comes at a time when British Columbia seems headed for a turbulent time in forestry as the state of forest management is being held up to scrutiny following a review process that resulted in recommendations to the government that were accepted. However, further work will be required for these recommendations – representing a "paradigm shift" in forest management – to be implemented. At such a moment, it is expected that having accurate information and an agreed set of facts is a necessary condition for constructive dialogue.

With the Green leader's official statement in the Legislature now on the permanent record, Resource Works wanted to understand exactly what she meant. Her words have been accepted as a simple statement of fact by many in the news media, and are a staple talking point for various organizations seeking publicity by seeking to thwart approved harvesting in the area surrounding the Fairy Creek watershed. 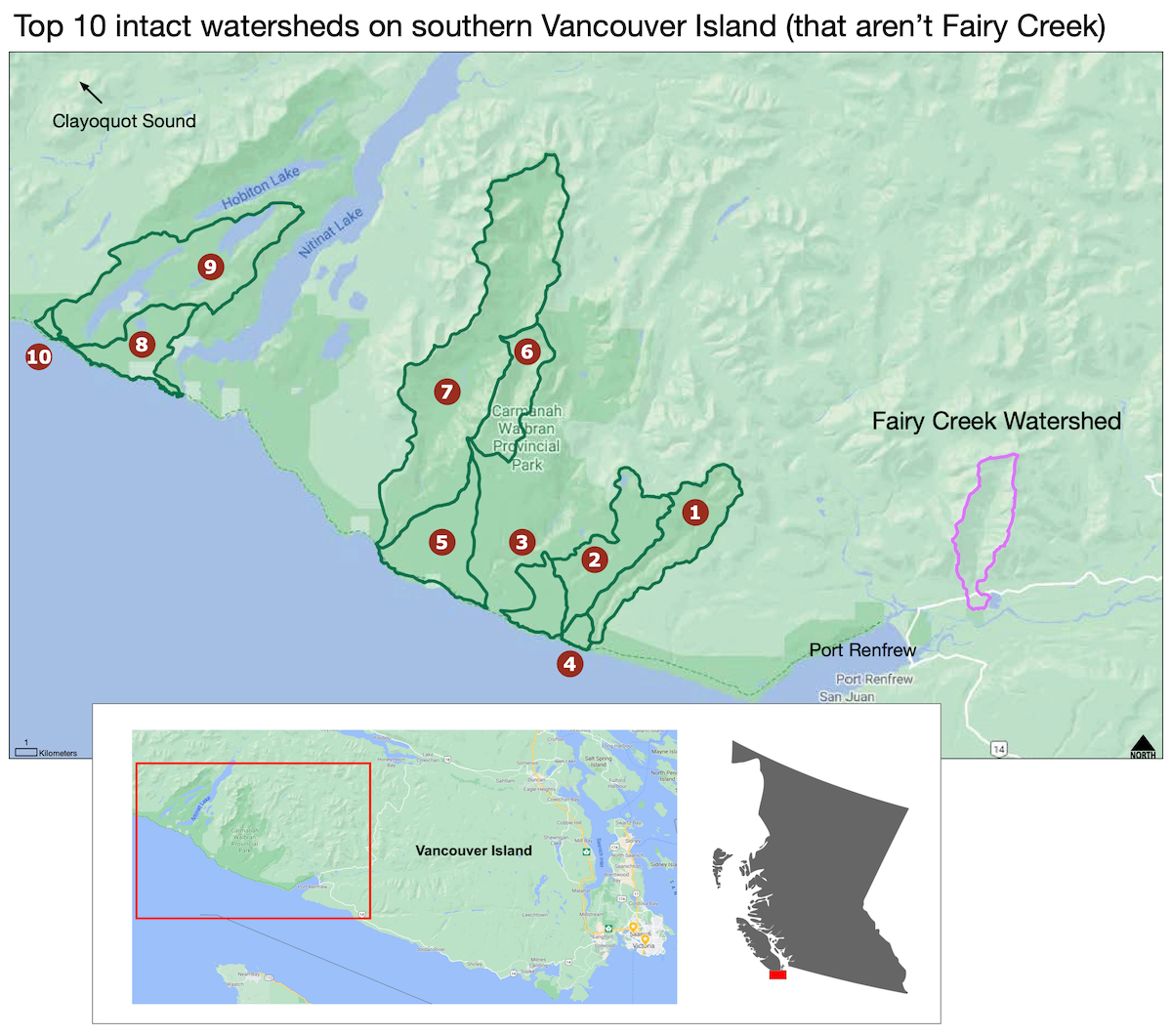 Based on examination of mapping records, here's the actual list of intact old-growth watersheds south of Clayoquot Sound:

The term "intact" here might be controversial for some. It's worth noting that even the Fairy Creek watershed, which Furstenau is on the record calling intact, has been subject to extensive harvesting in its lower reaches. Some would even argue that "two-thirds" intact is hardly the same as "the last intact watershed". The list of 10 intact, protected watersheds here generally applies a higher standard of the term. In some cases one might argue for use of the term "mostly intact". Certainly, in the top 10 list there is no watershed that is less intact than Fairy Creek.

Nevertheless, others in the environmental movement continue to repeat the Fursteneau phrase. The Tyee, for example, is happy to call Fairy Creek "the last intact valley on southern Vancouver Island" despite the facts.

The minister responsible for forestry, Katrine Conroy, was on the spot in Question Period over successive days of BC Green questions. It's apparent from the transcripts that the Greens were seeking to keep the spotlight focused on the "last intact watershed" fallacy and other related claims. On the same day as Furstenau's sweeping but untrue statement cited above, Conroy said: "The member is inaccurate in her numbers. She likes to put out numbers. I don't know ... I would love to meet with her to talk to her and have a briefing on where she's getting her numbers from, because they are inaccurate."

It's impossible to say why the BC Green leader was willing to make such a sweeping and untrue statement in the House. After all, there is no need to make factually incorrect statements when the Legislature has extensive research facilities available to members.

READ: Here's the real story on Fairy Creek and the future of responsible forestry

Whether a ministerial briefing occurs remains to be seen. In the meantime, the episode is a reminder that without reliable information, it's difficult or impossible to develop policies that respect the need for government-to-government discussions with Indigenous Nations while also talking to workers, industry, and local communities who are dependent – directly or indirectly – on the forest industry that employs 24,000 residents on the coast alone.

On April 1, forest product company Teal-Jones won the injunction it sought to get back to work on its permitted operation. Supreme Court of B.C. Justice Verhoeven, in issuing his decision, noted that protesters are a "very militant group" who have "expressly threatened a 'protracted civil disobedience struggle'”. Verhoeven observed that these protesters refer to a “war” and “battles” and that company actions in seeking an injunction “will be met with resistance”.

Wrote Verhoeven: "These are words that may incite violence."

Those words proved to be prescient.

Just a day later, on the evening of April 2, Victoria's Camosun College issued a statement responding to concerns that a faculty member had threatened potentially deadly actions against forest workers. "We do not condone any type of behaviour that is illegal or harmful to others," stated Rodney Porter, the college's executive director of communications and marketing. (It turned out the individual had not been employed by the college since 2019. The college updated its statement on April 3.)

Others have lost their jobs for much less.

Here's a striking truth about the Fairy Creek situation: the fact is that old-growth trees and wildlife in the Fairy Creek watershed are already substantially protected. In fact, the very protections that environmental groups seek are already in place. The existence of 10 other protected and intact watersheds south of Clayoquot Sound is further reinforcement of this.

Is Fairy Creek the site of ongoing blockades and protests simply because it is easy to get to from pressure groups based in Victoria? Is it serving as a picturesque stage set for some greater environmental question or other concern, unrelated to the specifics of local forest management practices?

And: How much of the potential violence that concerns Justice Verhoeven and Camosun College is attributable to carelessness about the facts?

"Shifting the forestry paradigm" requires getting down to serious work that will ultimately be to the benefit of everyone. One thing that's desperately needed is a way to separate fact from fiction. For those in elected office, taking the high road will benefit everyone in the long run – and keep our society safe.