Inuktun Systems Ltd.: Going where angels fear to tread and alligators are said to lurk

Greener and more efficient use of our precious natural resources can only come from harnessing technology. In the Naturally Resourceful series, Resource Works writer Don Hauka looks at the British Columbia companies that are on the leading edge of this transformation. Fourth in the series. 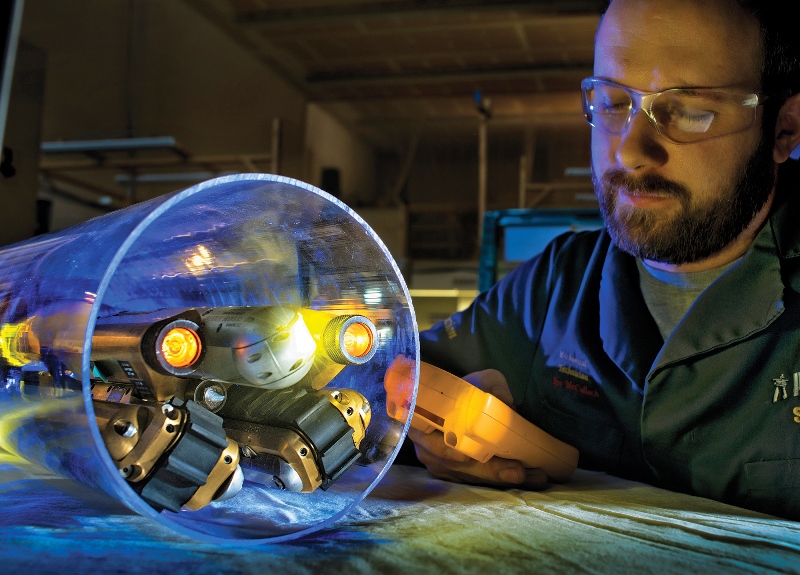 To keep your edge in the global robotics business, you have to be able to go where angels fear to tread and alligators are said to lurk. Inuktun Services Ltd. (ISL) does just that. Whether it's a devastated nuclear reactor in Fukushima, Japan or a sewer closer to home, ISL is a world-leader at going into deep, dangerous and tight corners.

And as President and CEO Colin Dobell says, is all about being able to handle the pressure.

"We have a lot of experience with things that go deep and are under pressure under water -- we do systems that go 5,000 metres underwater for example," says Dobell.

"We've also done cameras for the U.S. Navy, sticking them to the side of a ship's hull travelling 14 knots through the ocean where we had to really account for the forces and the vibrations and other factors."

Founded in 1989, ISL designs and manufactures Remotely Operated Vehicles (ROVs) and modular robotic systems for use in confined spaces and hazardous environments. The company's team of engineers, scientists, administrative and production personnel work out of ISL's facility in Nanaimo.

ISL initially specialized in designing swimming ROVs for the underwater industry. Since then, the company has branched out to provide products to the power generation/ energy sector, petro-chemical, mining and other resource industries. They export to over 40 countries, have a subsidiary in Houston Texas and distribution offices in Scotland, Singapore and in China and other parts of the world.

Dobell says one of the keys to ISL's success has been a novel design philosophy. On one level, it's cutting edge modularity of components. On another, it's almost kid's stuff.

"Think back to your youth and your Meccano or Lego sets where you have a bunch of pieces you could put together to build whatever you want. We're probably the closest to the real world implementation of that on the robotic side," says Dobell.

A vast array of different components allows ISL to customize solutions for its clients by adding sensors, cameras and other elements to a variety of crawler devices to come up with a unique robotic system that can probe just about any place on the planet.

In addition to braving Fukushima's melted-down nuclear reactors, ISL's robots have explored pipelines, oil tanks, mine shafts and subsea well caissons. And yes, they routinely disprove that urban myth about alligators in the sewers.

"One of the worst environments that our equipment goes into on a regular basis is sewer pipes," says Dobell. "You can end up with a very challenging environment in a sewer pipe -- there's a lot of nasty stuff in there."

Another ISL innovative edge is their ability to sweat the small stuff.

"The other thing we do really well is small," says Dobell. "We do mobile robotics for inspection that get into very tight spaces. One of our new systems will crawl inside a two-inch pipe, which is not something we're aware of anyone else offering."

But ISL technology is not confined to natural resource industries. It has application in the renewable sector, particularly wind farms. Dobell says the company helps some of the sector's key players by providing systems to inspect wind towers and even inside the blades of wind turbines.

All this makes ISL a BC-based firm that's a world-leader in high-tech innovation. Dobell says the province is an innovation leader. Problem is, most people are unaware of how cutting-edge BC firms are.

"The public don't know what we have here," says Dobell. "We don't stand up and shout about it a whole bunch and I don't think most of our political parties and politicians even know most of the really innovative, creative companies that are supporting the economy in BC."