Two MPs who defied a judicial order using the excuse of "social justice" forgot their role as political leaders. Ian Binnie spoke out on the practice at the Law Society of BC's Rule of Law lecture.

When Green Member of Parliament Elizabeth May and Burnaby South New Democrat MP Kennedy Stewart defied a court order placing limitations on protesters and got themselves arrested, they were forgetting their duty to uphold the law "as it is," said Binnie at the event in Vancouver.

The issue was the Trans Mountain Pipeline expansion protest that has been going on at Burnaby Mountain. Although protesters do have the right to protest, opinion polling continues to show that a significant majority of Canadians approve of the project, which will ensure the safety and improve the economics of petroleum shipments from Edmonton to Vancouver.

According to a report in Canadian Lawyer, the move by Kennedy and May is part of an "extremely dangerous trend", with other examples cited of political figures defying the law.

Binnie was part of a panel discussion where it was also pointed out that trying to exert raw political power to undermine the rule of law was a feature of Nazi governments.

Judges, as well as political leaders, have to uphold the law as it is.

Justice Binnie's comments are borne out by the B.C. Supreme Court sentencing of Elizabeth May on May 28. Justice Affleck was disparaging of May's contempt for the rule of law and abuse of her professional and Parliamentary status, giving her triple the fine recommended by the Crown. The full reasons for sentencing are worth a look:

[1]             THE COURT:  Ms. May’s circumstances and her conduct do not fit the pattern of others who have pleaded guilty to criminal contempt in these proceedings and who have been subject to $500 fines or community work service orders. Ms. May is not only a member of parliament, she is also the leader of a political party whose purpose is to have increasing influence on public opinion on matters of importance in Canada. In this instance Ms. May has sought to influence others to disobey the injunction.

[2]             The rule of law is not a guaranteed feature of Canadian life. It needs constant vigilance to be sustained. It is not only judges who have that obligation; so does everyone else, most particularly those members of parliament who lead political parties. We can easily look to other places in the world to see where the rule of law has never existed or has been lost. The dire consequences are on the daily news that we all see. The law applies to everyone. Nobody is entitled to pick and choose the laws or the court orders they will obey because they believe they have a higher obligation. If they choose to do so and offer public defiance of a court order, the judges of this Court have a duty to respond to that defiance.

[3]             As well as being a member of parliament, Ms. May is a lawyer. Lawyers enjoy privileges in our society such as that of professional advocates in the courts. With privilege comes responsibility. In this case Ms. May had a responsibility to obey the injunction and to persuade others to do so.

[4]             I note that no law or order has prevented Ms. May or any other persons from protesting the building of the Trans Mountain Pipeline even near to the worksites. The injunction expressly preserves the right to peaceful, lawful and safe protest.

[5]             I conclude that on March 23, 2018 Ms. May went to a worksite of Trans Mountain Pipeline with the intention of defying the injunction in a manner which drew maximum attention by the media to that defiance. That is criminal contempt of court. Ms. May exploited her role as a member of parliament and as a party leader to encourage others to defy the injunction. Her punishment for criminal contempt must be greater than that of persons who do not hold positions of authority and influence.

[6]             I cannot accept a fine of $500 as recommended by the Crown and defence as a fit sentence. It is unusual for judges to depart from joint submissions, but in this case I conclude it is appropriate to do so. 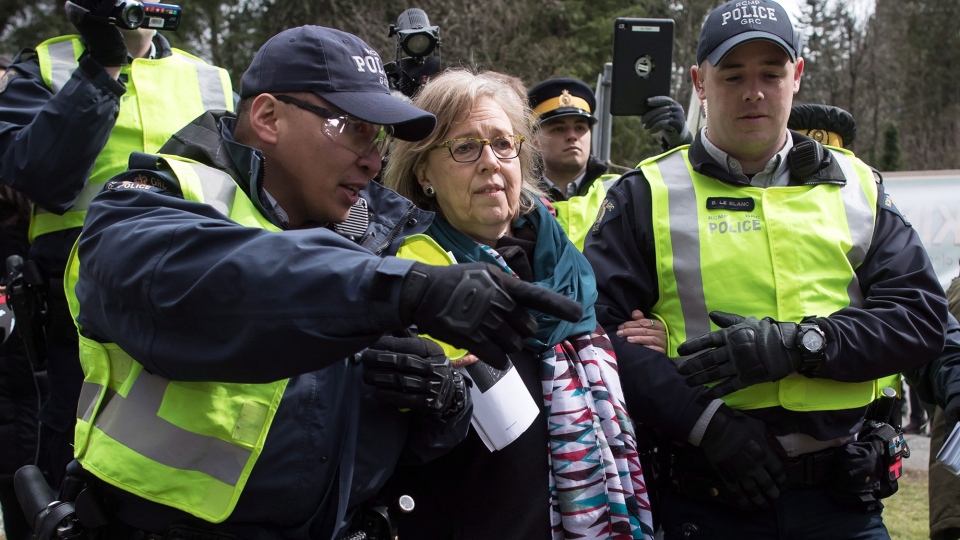