LNG in BC: Take the long-range view

Within minutes of his return last week from a trade foray to Japan, BC’s LNG minister, Rich Coleman, was once more facing a barrage of questions:

It can be a little confusing, to be talking about a glut of LNG on the market and plunging prices but, at the same time, to be looking for Final Investment Decisions on multi-billion-dollar LNG plants in BC.

Once more, though, we have to remind ourselves that big LNG developers do not make those decisions based on today’s spot prices.

They are looking at supply and demand and price predictions for 20 and 30 and 40 years out.

Yes, for the next few years, prices will probably remain on the low side. The supply-demand equation will be out of balance for a while. Producers will focus on cost-management, and on pursuing new markets to sop up the surplus.

But what investors and developers see is rising demand for LNG from Asia through 2040 (and then on through 2050) with a notable shift toward LNG and natural gas as a cleaner alternative to petroleum fuels.

Japan, South Korea and Taiwan (JKT in the graphic below) would remain the backbone of the global LNG market; China and India are expected to be the biggest sources of additional demand for LNG. 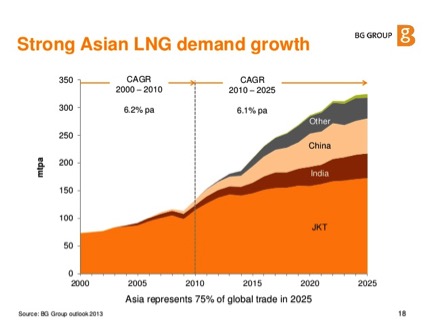 So we in BC might listen to Osamu Watanabe, president of JAPEX, the Japan Petroleum Exploration Co. Japex has interests in natural-gas exploration in northeast BC—and 10% of the Petronas-led Pacific NorthWest LNG project proposed for Lelu Island, Prince Rupert.

That begins to explain why Japan is interested in our LNG over the long term, as is China and India. That’s why Japex has already invested billions in BC natural gas and LNG.

Nothing to do, then, with today’s spot prices or Japan’s temporary overload of LNG. Japex, like other LNG investors, is looking ahead to 2030 and 2040 and 2050.

We might listen, too, to David Keane, president of the eight-company BC LNG Alliance. He agreed in a magazine interview last week that we indeed face LNG competition from Australia, the U.S. Gulf Coast, the Middle East, Africa, and Russia.

“But we should remember that buyers are going to want to diversify their supply mix.

“British Columbia also has some huge advantages. One is our proximity to Asian markets – we are much closer to China, Japan, and Korea than the U.S. Gulf Coast or than East Africa to China or Japan.

“As well, we have about a 25-per-cent increase in the production capacity in our LNG facilities for the same amount of investment that would be made in warmer climates, such as the U.S. Gulf Coast, because of our cold climate. It takes considerably less energy to cool and liquefy gas in a cold climate than in a warm climate.”

So there are indeed answers to some of those questions thrown at the BC minister.