Peter Severinson writes that he has been reading a lot of crazy, confusing and contradictory things about the sector lately. To clarify things, here are his answers to some good questions posed by no one in particular

Well that’s the big question, isn’t it? The altogether unsatisfying answer is: maybe. This is ultimately a risky business involving much uncertainty. At the latest count there are 16 proposed BC-based LNG export facilities. The Business Council of BC estimates proponents have spent about $2 billion on their ventures already. They wouldn’t be here if they didn’t think they had a shot.

Why so much uncertainty? Isn’t there a huge demand for gas in Asia?

There absolutely is. The demand is huge. Here’s what the last 17 years of Asian natural gas demand looks like: (From the International Energy Agency.) 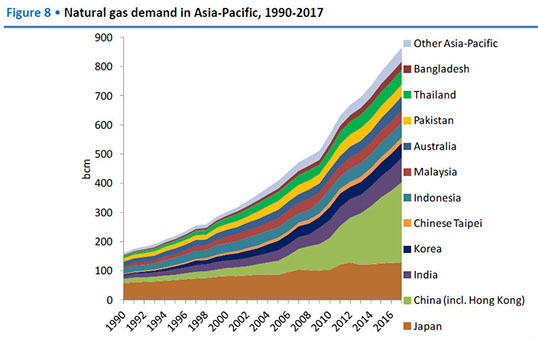 And this is a big reason why people in Asia are willing to pay so much more for gas than people in North America. As you can see here: (From BP’s Review of World Energy) 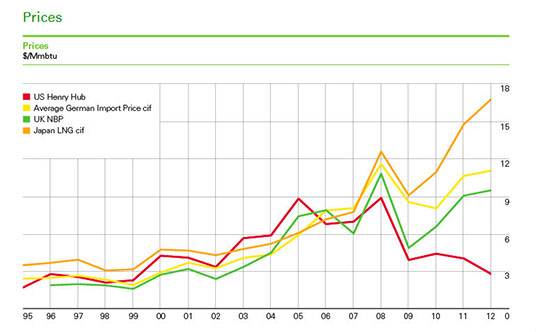 But if the demand is so big, why are people worried about BC’s LNG sector succeeding?

Because, even with all this demand, there are still more LNG facilities being proposed today than the world needs. If every planned LNG facility in the world gets built, there would not be enough customers to buy it all. (See, for instance, here and here.)

Does that mean some LNG facilities won’t go ahead?

Yes. That’s exactly what that means.

Well, it’s really not. Even if just a few of the BC facilities go ahead, it would be a huge boost for the economy. The provincial government estimates that five LNG plants built between now and 2024 would result in 83,000 new direct and indirect jobs and industry investment of $175 billion. So if five out of 16 plants are built, we should count that as an achievement, not a failure.

BC also enjoys some competitive advantages relative to its competitors. These include BC’s proximity to Asia, our trusted corporate and government institutions, our ample gas reserves and our low costs. Canadian LNG plants are expected to be able to run much more cheaply than those in other parts of the world, as you can see in this chart from a recent PwC report. 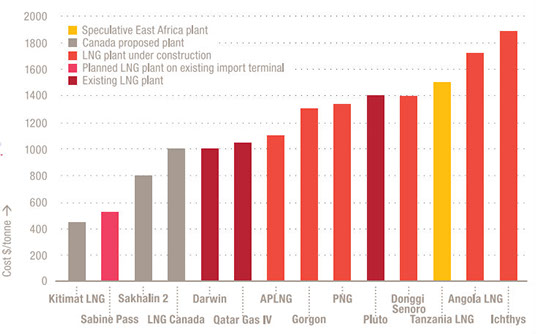 The overall message here is that we shouldn’t take the success of BC’s LNG industry for granted. If we want this industry in BC, we will have to compete for it. But we should also not give up. We have a lot of advantages that suggest we can compete with the rest of the world.

Won’t prices go down in Asia if all this natural gas hits the market?

If I could predict such things, I’d be trading stocks, not blogging. But let’s answer that question with some textbook economics: If supply grows faster than demand, yes, we’d expect prices to drop.

No. LNG facilities are major investments, and proponents won’t build them unless they are certain that they’ll get a good price for a long time. That means all the companies are working to secure long-term contracts with customers.

So the day-to-day price of natural gas might shift up and down, but the prices BC’s LNG industry will get will be fixed by long-lasting contracts. If a company can’t secure such a  contract, do not expect them to build an LNG facility.

But not all the world’s proposed LNG projects will be built. So who will get these contracts?

Excellent question, imaginary rhetorical device! In this business there will be a limited pool of long-term contracts to win. And when they’re taken, they likely won’t become available again for many years, likely decades. So if you’re an LNG company, there’s a race to secure those contracts. Again, the pressure is on for BC’s LNG proponents to compete with those around the world.

It is highly unlikely that all 16 proposed BC facilities will be built. Do not be surprised if that list gets shorter in the next few years. But remember that even a handful of successful BC LNG facilities would be a major boost to the BC economy. Economists who do long-term projections sometimes go with the assumption that BC will have three to five LNG facilities up and running by the early 2020s. (Here’s one example.)

So what’s stopping BC’s LNG proponents from signing these deals?

Oh, let me count the ways: There’s new pipelines to built, permits to get, regulations to navigate, First Nations to consult, investments to gather, tax regimes to figure out, labour to secure, communities to engage, contracts to negotiate, facilities to build, and on and on. These things are not simple. But let’s not forget that we have advantages too, including low costs, good routes to Asia, great supplies of natural gas and strong institutions.

So is BC’s LNG industry REALLY going to happen?

As I said: Maybe. To some extent, we can take comfort in the fact that a lot of companies want to be in BC. They’ve looked at the fundamental business case and decided it’s worth trying. That counts for a lot. But let’s not fool ourselves; there’s a long way to go and we can’t be certain how it will all turn out.