Looking for a job? Look no further than natural resources

New information released under the government of Canada's open data program, which is illustrated by the accompanying chart, shows that the sector grew more than any other 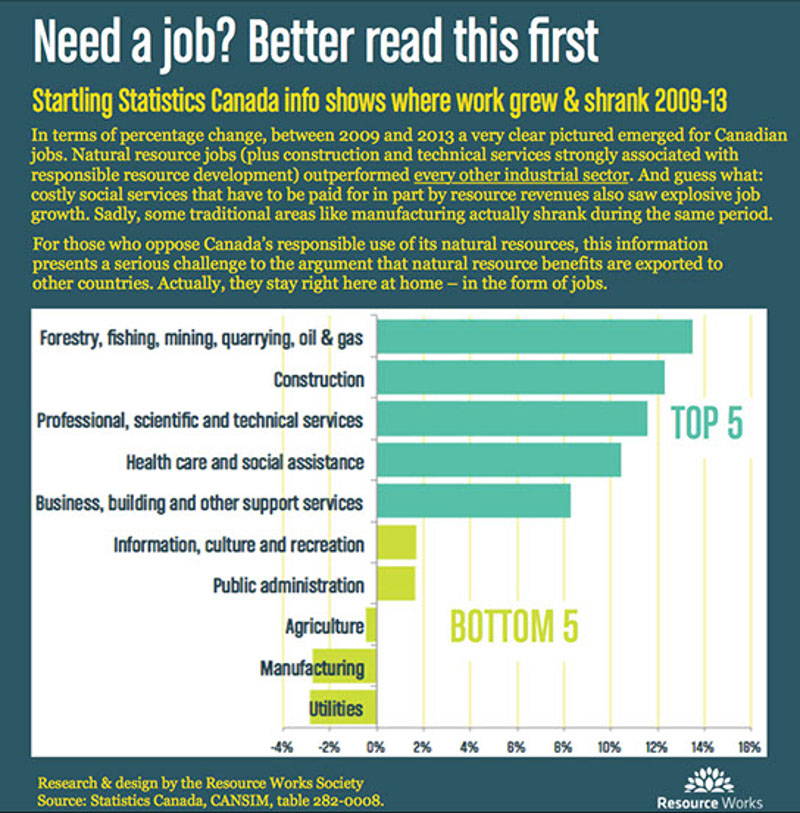 Construction is the second largest growth area. Given that Canada has an estimated $700 billion worth of natural resource projects currently on the drawing board, it is a very safe assumption that much of this building activity relates to resources.

It is a similar story for the third-largest growth area: professional, scientific and technical services. Whether it is materials testing, engineering, GIS, or environmental technology, this is an area that has provided large-scale job growth in recent years.

It’s interesting to note that a large employment growth area is health care. With the growing demands of an aging population to consider, this is not too surprising. Health care jobs result in citizens enjoying high-quality lives and are thus an unassailably sensible investment – but unlike natural resources they do not generate “first dollar” type of wealth creation.

In terms of low and negative growth, the picture is not bright for areas like manufacturing. That is not surprising. Jobs that can be performed just as well but more cheaply somewhere else will, in a global economy, be attracted to lower cost areas.

Making things certainly seems to qualify for that, which is why textiles, cameras, automobiles and all kinds of other consumer product are now produced in lower-cost parts of the world.

The reason natural resource industries have been affected by the same downward trend is that no other part of the world can do what Canada can. The reason for this is very simple: Canada is one of the very few countries in the world that has the kind of resources it does.

These findings are consistent with the employment effect demonstrated recently by Resource Works in its 7 Myths of the BC’s Natural Resource Economy report. It is now firmly proven that the natural resource industries have an outsized effected on broader job growth.

For example, 55 per cent of new jobs are in the Lower Mainland when British Columbia’s overall natural resource sector grows by 10 per cent.

A recent press report in The Globe and Mail showed a similar trend: 6 of 10 high-demand jobs in British Columbia over the next decade are associated strongly with natural resource activities.