ENERGY EAST: Manufacturers of dissent know how to do photo-ops but they do not represent the majority

Carefully staged public displays of indignation have become an art form in the social-media age. When they are brought to a violent head, as in Montreal at oil pipeline hearings on Aug. 29, do they give up legitimacy? It all depends on whom you ask. 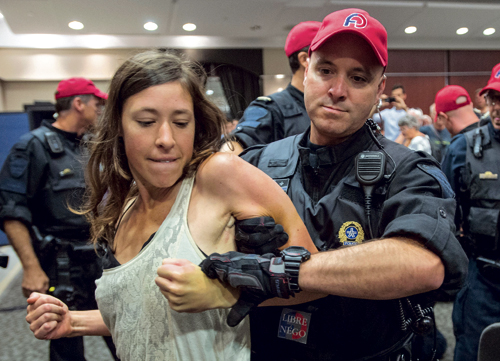 Monday's Energy East pipeline hearings in Montreal were so effectively disrupted by protesters that an indefinite postponement was issued by the National Energy Board. This is a sad comment on the status of a democratic institution with a remit from Parliament to ensure the public is protected from harm caused by energy projects.

A Canadian Press image shows a female protester being led away by a police officer who is dressed in soft tactical gear. She seems positively aglow with martyrdom, and in another image seconds later we can see her with a beaming smile giving the thumbs up as if to say: "Photo op secured!"

Depending on your perspective, this image will provoke a range of responses. Some will see it as yet another tired attempt by the Canadian protest industry to manufacture dissent.

I must admit that I was tempted to wonder whether Cirque du Soleil has not already recruited this outstanding performer by today, though no doubt she will be in demand for other whistle stops on the Energy East tour.

Others will be saying: more power to her, finally someone is standing up for my views.

For the policy makers these antics are aimed at, they must be wary of appearing callous to genuine citizen concerns. They must tread carefully on this issue lest they feed the protestor's agenda to secure public sympathy.

For those asking today whether this appeal to emotion bears any connection to broad public opinion on the Energy East issue, a recent presentation by pollster Bruce Anderson of Abacus Data provides some solace. His point is that although oil pipelines do tend to have the toughest time winning public support, anything new encounters this issue to a degree. The following slide is from a presentation he gave in Winnipeg last week: 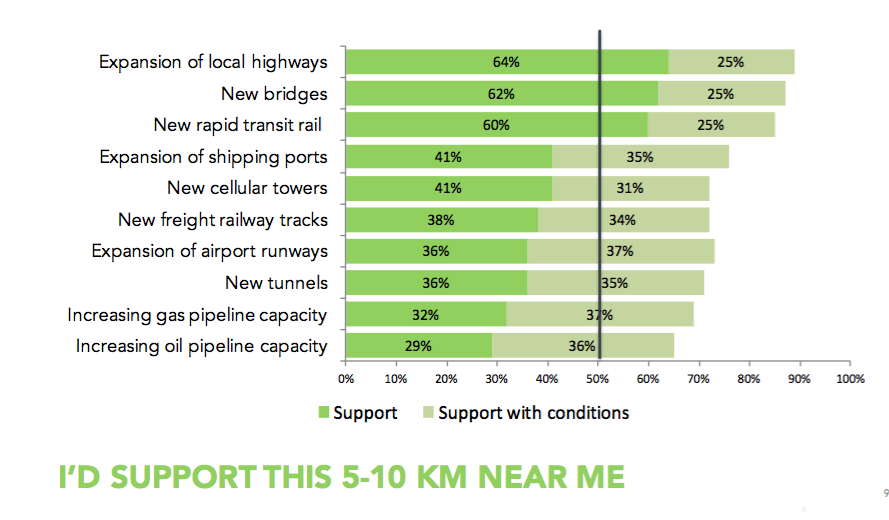 In all cases, majority support exists when conditional support is included. Oil pipelines are not an exception: rapid transit, cellphone towers and wind farms get the same treatment.

Here is the learning I derive from this information: The most important audience for communications about energy safety and defensibility is always going to be those who would support a project as long as they think they could develop confidence in it.

For protest leaders, aligning themselves to a mayor like Denis Coderre of Montreal (whether he asks for it or not) is the only path available to assert relevancy and make the case that conditional supporters should swing to opposition. It follows that to these actors, Mayor Coderre is but another stunt prop who could be used to pry conditional supporters over to opposition. They have, after all, the example of Vancouver Mayor Gregor Robertson whose administration has directed taxpayer funds to run an audacious anti-Canadian-energy program. Coderre, whose political allegiances are different than Robertson's, finds himself in an awkward position because dismissing the illegitimate tactics of the protesters trying to align themselves to him would only seem to undermine his own concerns.

A Montreal newspaper columnist has written that, because of the disruption, mayor Coderre did not get to deliver his remarks to the NEB. The columnist, Gilbert Lavoie, waded through the mayor's 15 pages of speaking notes and extracted three key points. They are below, in Google translation with some minor improvements by me, with the original French in square brackets:

These appear to be honestly derived statements of concern. And for each of the arguments there is a clear and compelling case why Canadian energy sovereignty, attached to innovation investments that lower carbon intensity in the oil sands, is a national priority. 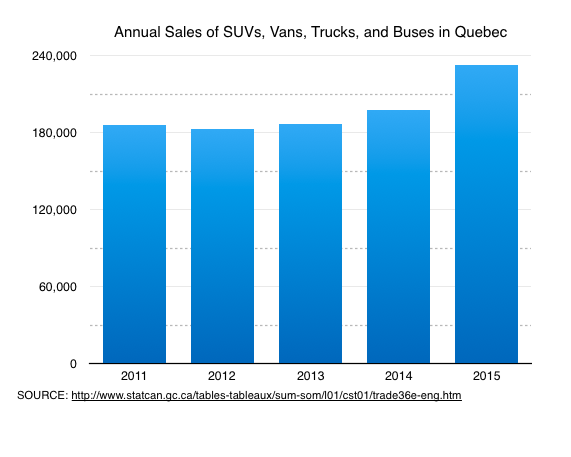 There is a serious gap between behaviour of Quebec residents generally and the thought processes of protesters. It might be worth somebody pointing this out while efforts continue to satisfy Mayor Coderre's reasonable questions.

Take the example of Quebeckers' growing willingness to drive gas guzzlers. In 2011, according to Statistics Canada, they purchased 186,078 trucks, SUVs, minivans, vans and buses. Last year, that number grew to 232,898. That's an astonishing increase of 47,000 a year. Every year for the past three, the number has risen by thousands. Where do the magic fuel ingredients come from for these vehicles? "Just go electric!" is an inane answer in 2016. It seems that Mayor Coderre has no interest in this question, nor do the protesters, nor do environmentalists in Quebec, Alberta or elsewhere.

The demarketing of Canadian energy products, which is what the performance artists hope to accomplish, will only give advantage to foreign suppliers of necessary fuels, and do nothing to address climate change. If the NEB does its job, residents of Montreal (and elsewhere) should be able to sleep soundly knowing they are protected.

People who are satisfied with the process don't complain about it, and that is the vast majority of Canadians.

Stunts like in Montreal, or the disgraceful personal attack tactics employed against panel members in the recent B.C. hearings on the Trans Mountain Expansion, are inauthentic representations of majority opinion.

But these arguments seem not very relevant for as long as Mayor Coderre is able to say he has not been acknowledged. It is the manufacturers of dissent who have silenced his voice, not those responsible for the Energy East hearings. The National Energy Board needs to recognize this and act accordingly. Mayor Coderre is not a puppet of fringe activists, and he does have legitimate views that need airing. It is a matter of urgent national interest that the NEB's lawful regulatory hearings continue. Failure to conduct these proceedings would damage far more than a single proponent's application.