Many sectors of our economy rely on our coastal waters as their “marine highway.”

In Part One of our examination, we looked at issues raised by coastal marine management and regulatory developments.

Now Karen Graham and Denise Mullen look further into it all.

Against the backdrop of the marine planning and regulatory developments on BC’s coast discussed in Part One, we expect the new federal government to re-engage in several ways:

Not only is the government expected to be more activist (given the priorities above), but Ottawa also holds jurisdiction in several important coastal marine activities, including transport, fisheries, environment (shared), navigable waters, and marine safety.

The environmental movement has been clear that it views Marine Protected Areas and National Marine Conservation Areas as the minimal acceptable level of protection to satisfy its priorities. It will likely seek stronger protections for marine formations and attributes.

Many sectors of the BC and western Canadian economy rely on coastal waters as their “marine highway” to safely move goods and commodities to markets; people to and from their destinations (including for tourism); and as a source of economic activity in their own right (commercial and recreational fisheries, aquaculture).

Several of these sectors are notable generators of economic activity within BC, and have a substantial a share of the province’s goods exports.

BC Exports by Commodity 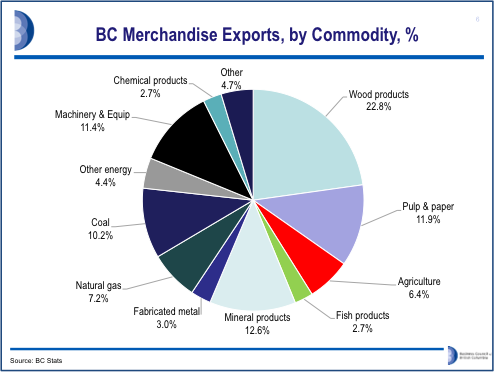 Over the longer term, especially if the Trans-Pacific Partnership trade agreement is ratified, coastal industries such as aquaculture are well positioned to take advantage of lower tariffs (especially in Japan and Vietnam) and should be able to substantially expand their exports.

The sector will only be able to grow if the marine management regime effectively balances environmental protection with economic imperatives.

Questions arise about the implications of future protected and conservation areas, how these are coordinated with broader ecosystem-based management plans, and what new areas might be subject to future regulation.

Further—and most important to industries on the coast—is whether ad hoc regulation development could impede the ability to:

Could shipping routes from the Port of Prince Rupert be constrained? Could shipments from Canada’s number one-ranked port, Port Metro Vancouver, also be affected?

Questions also arise about the “share of effort” that is appropriate in meeting Canada’s target of protecting 10% of marine and coastal areas. Through a variety of mechanisms such as marine parks and conservation zones, BC already enjoys a high degree of marine protection along its coast.

Collaborative planning among the federal and provincial governments, First Nations groups and industry is essential.  BC’s coastal sectors have not been well served by the minimal level of engagement by governments to date.

The energetic efforts and substantial funding by environmental organizations focused on protecting BC’s coast—both land and sea—have outpaced the planning and consultation obligations of government at both senior levels. And industry sectors that use and rely on coastal waters need to engage more fully in the marine regulatory processes already underway.

The elements of a successful coastal regime should balance environmental and economic sustainability, incorporate long-range planning, and rest on the principles of:

Such a regime should support the sustainability and growth of export sectors including energy products, wood products, agriculture, aquaculture and manufactured goods.

Our ability to export and to compete in global markets is foundational to maintaining a vibrant provincial economy.

Karen Graham is consultant, public policy and research, with the Business Council of BC. Denise Mullen is director of environment and sustainability at the council.

Our series originates from the February 2016 issue of the Environment and Energy Bulletin of the Business Council of BC.