In a series of stories marking Mining Week, Resource Works takes a look at what the sector means for Metro Vancouver’s economy - particularly in the areas of job creation and innovation

British Columbia’s event-filled Mining Week officially began on May 11, but natural resource-dependent communities around the province are already celebrating.

Mining Association of B.C. president and CEO Karina Brino addressed the Kamloops Chamber of Commerce on May 2, talking about the industry’s ability to create new jobs and increase revenue for government services such as health care and education. Last year, for example, PricewaterhouseCoopers reported that the industry generated gross revenues of $9.2 billion, and provided 10,429 direct jobs.

Other events in recognition of Mining Week take place this week in Kelowna, Princeton, Smithers, Sparwood, Prince George and the Britannia Mine Museum north of Squamish, leading to the official launch on May 11 in Vancouver at the national convention of the Canadian Institute of Mining, Metallurgy, and Petroleum.

At the CIM convention, there’s a job fair, a trade fair, safety and environment, as well as hands-on exhibits that are expected to attract about 4,000 students, teachers and members of the public. Conference topics include technology, environmental management and mining ethics.

As Resource Works recently reported in a landmark study by Philip Cross, former chief economic analyst for Statistics Canada, mining and other natural resource development benefits all of B.C., not just resource-reliant communities scattered around the province.

Cross reported in The 7 Myths of BC’s Resource Economy that the Lower Mainland also a primary beneficiary through service jobs that arise as a consequence of resource development.

In a series of stories, Resource Works takes a look at this key segment of Metro Vancouver’s economy, and explores opportunities for development, innovation and job creation through conversations with miners, mine developers, software developers and senior analysts. 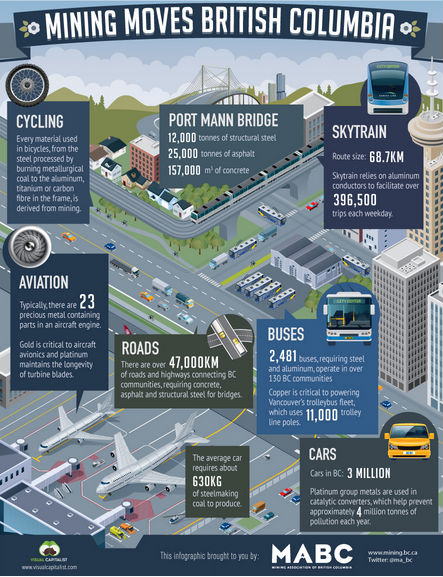