We’ve kept an eye on mass-timber buildings since the Tallwood House student residence at UBC was topped off (in 2016) at a world-record 53 metres and 18 storeys. Resource Works catches up on the latest trends.

Tallwood was an early leader in some other strengths of “plyscrapers.” It met LEED Gold environmental standards, and it used sustainable wood, in this case from BC and Alberta forests.

Since then, two other mass-timber structures have beaten it for height:

British Columbia has also created some other leaders in mass timber construction.

Award-winning architect Michael Green is a one-time millworker and founder of Michael Green Architecture: “All of our projects are made from wood.” And 95% of the firm’s work is specifically built using mass timber.

He ‘s argued for tall-wood buildings in TED talks, including proposing wood buildings up to 30 stories tall — and taller. (Watch the TED video here.)

Indeed, Azure Magazine notes: “Thanks to the possibilities of cross-laminated timber, which is fire-resistant and as strong as concrete, wood construction is being considered for 70-storey buildings in Japan, 80-storey residential projects in London and mid-rise college campuses in Toronto.” 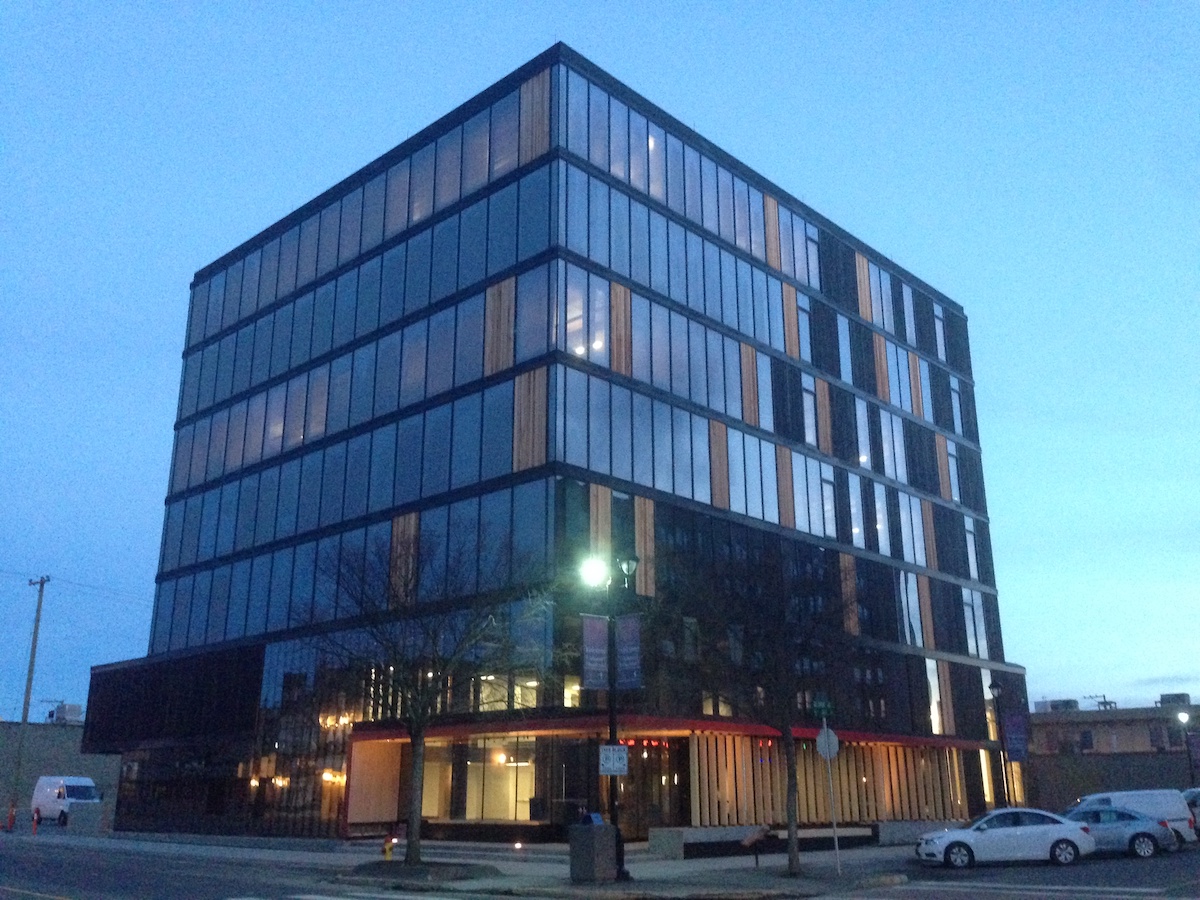 Green-designed buildings include the Wood Innovation and Design Centre at the University of Northern BC in Prince George (29.5 metres, pictured above), and the T3 mass timber construction in Minneapolis (26 metres). And he has written two books: The Case for Tall Wood Buildings, and Tall Wood Buildings: Design, Construction and Performance.

“Glulam is a stress-rated engineered wood product comprised of wood laminations, or ‘lams,’ that are bonded together with strong, waterproof adhesives (and) can be manufactured in a wide range of shapes, sizes, and configurations. . . . We use the slow grown, interior wet built Douglas-fir that is superior to any other fibre source in the world.”

Structurlam products have been used in 421 projects, in six provinces, eight states, and four countries —and that includes Tallwood House at UBC.

Adera’s Eric Andreason says: “Due to significant interest from international corporations such as Google, Microsoft, Adidas, Wal-Mart and others, mass timber has gained significant attention from the public and entire construction industry.”

And he adds: “When compared to concrete or traditional timber-frame buildings, mass timber is built quicker and cleaner, creating less Green House Gas (GHG) Emissions. The homes and spaces in a mass timber building are quieter and provide more safety in fire than a traditional timber-framed home, while providing fire resistance equivalent to that of a concrete structure.”

And there are these two tall-wood proposals: Terrace House at Coal Harbour in Vancouver was set to become the world’s tallest “hybrid” timber-and-concrete structure at 19 storeys, but ran into financial barriers and construction has stopped. There’s also a proposal for a hybrid timber and concrete tower of up to 40 storeys and 120 metres at 8th and Pine in Vancouver; it’s touted as potentially the tallest hybrid in the world.

When UBC’s Tallwood House was built (the crew said it was “like building Lego”) it needed special permission as, at that time, BC limited wood buildings to six storeys.

Now the BC Building Code permits 12-storey mass-timber buildings, and 14 municipalities so far have followed suit with local building rules for commercial and residential construction.

The BC government has set up a special office to promote the use of mass timber, and will use mass timber in the $1.9-billion redevelopment of a new St. Paul’s Hospital, and renovation of the Royal BC Museum in Victoria.

It’s all making mass timber into must-timber, and it’s all good news for BC’s forestry and mill companies, and those who make and use cross-laminated timber and glulam.

And for a forest sector that is vital to more than 100 communities in BC, and employs 140,000 people.