MYTH BUSTERS: Here's why log exports do not cost BC jobs

It's common to hear that selling logs to foreign countries is bad for British Columbia jobs. In fact, precisely the opposite is true. Stewart Muir explodes the myth in these six charts that take a long-term view of the evidence.

For those interested in a fact-supported debate, the proof is clear to see in these charts (and commentary below) that show why there is little to fear that log exports are costing Canadian jobs. The data is drawn from more than two decades of federal and provincial statistics for British Columbia forest employment and exports of logs and softwood lumber. 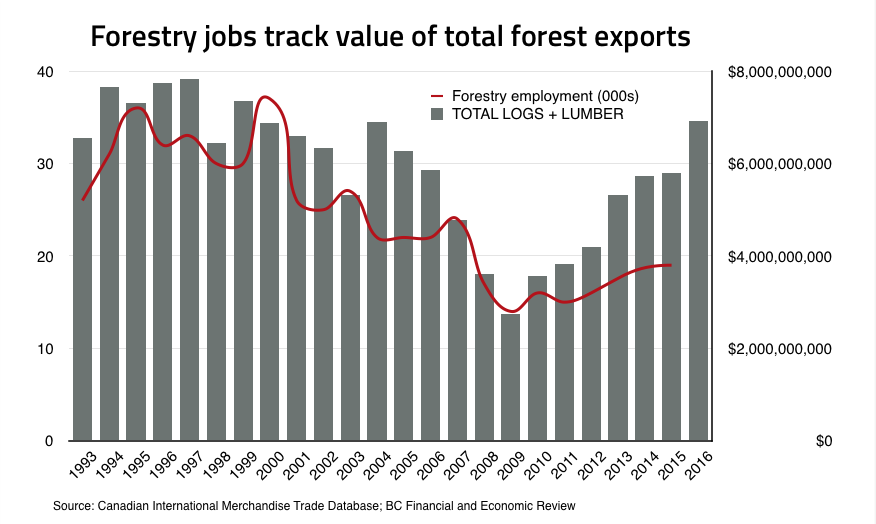 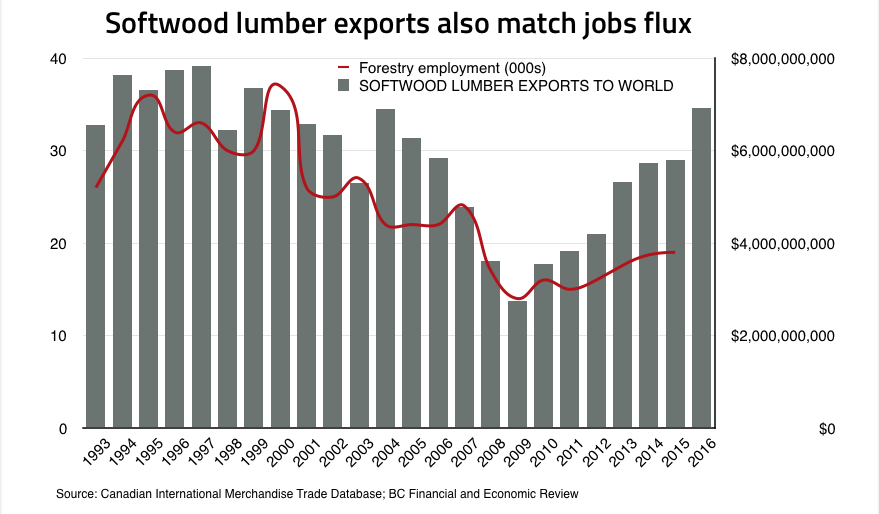 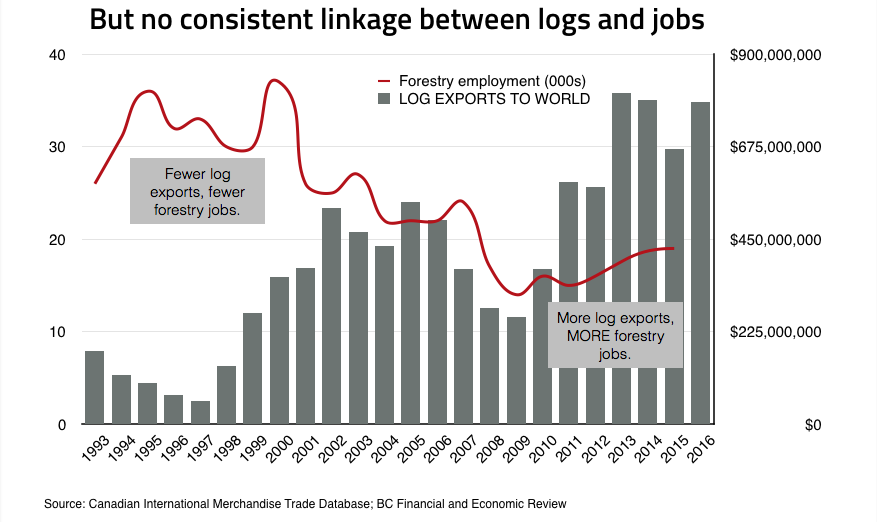 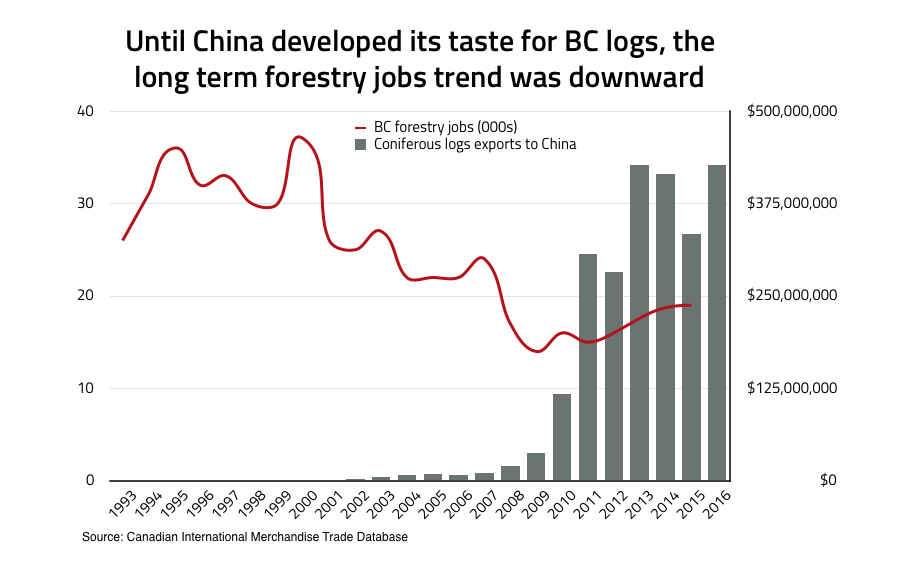 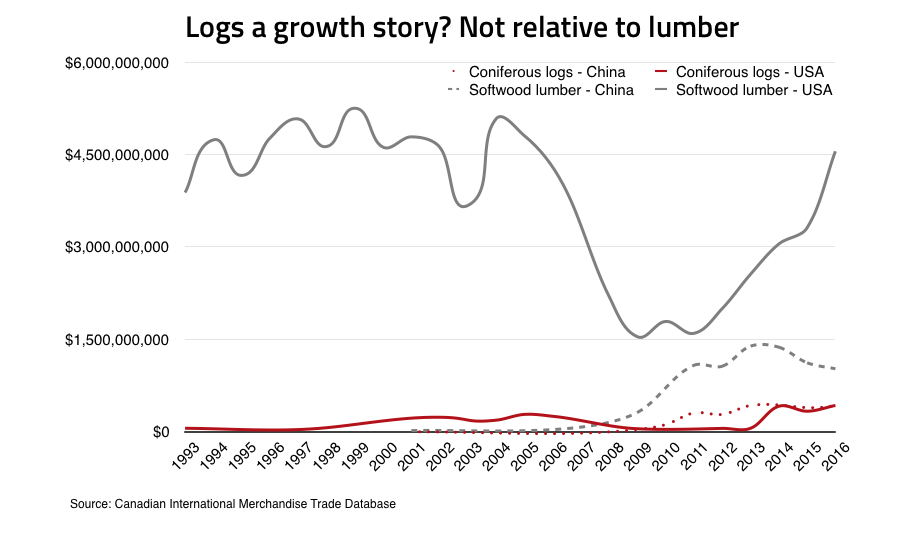 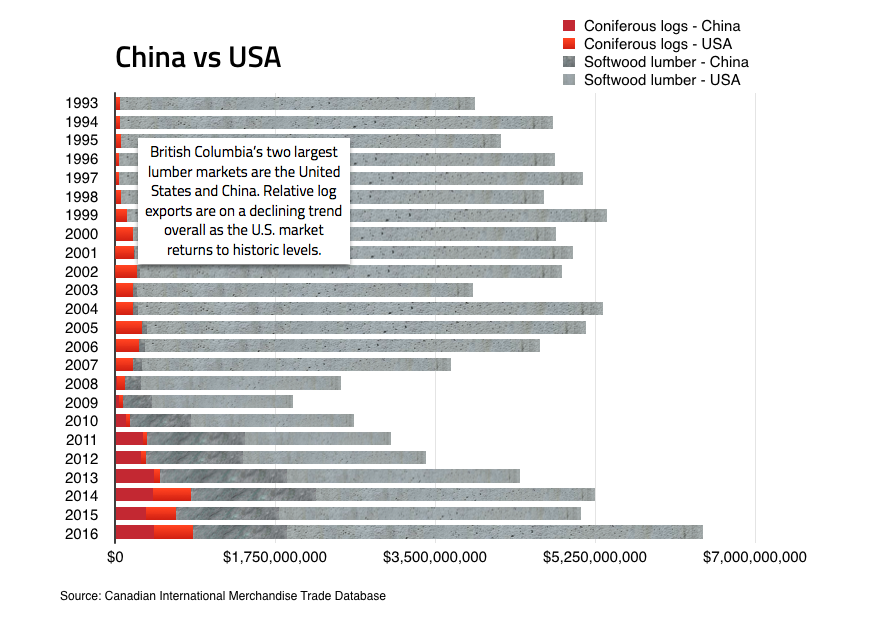 A report out this week from the Canadian Centre for Policy Alternatives (CCPA) on raw logs takes a withering view of export growth, pointing out correctly that between 2013 and 2016, "more raw logs were shipped from BC than during any other four-year period in the province’s history."

However, the conclusions drawn from this fact are completely misguided, suggesting the intention is to position the issue for maximum effect as British Columbians prepare for the May general election.

Exporting raw logs is a rational way for BC to expand its presence in global trade. Though it can be very unpopular to point this out, the fact is that the fattest profit margins and the best jobs are to be had in fostering, harvesting, processing, moving and marketing the natural resources that we alone control. Competing with others in subsequent manufacturing steps means having to match labour cost, productivity and capital availability that others can bring to the equation.

Where we can outcompete others in such manufacturing, we should definitely go for it. However, for a variety of reasons it's not always possible to do so.

Supposing you did want to stimulate local lumber manufacturing (and who doesn't want to do that?) the surprising fact here is that log exports are a positive stimulant. Contrary to what the CCPA claims, exporting raw logs is exactly the kind of policy you should be supporting if you believe in local mill jobs (more on this below).

The reason the CCPA takes the opposite, economically irrational position is that it is driven by nostalgia for the pre-globalization era and supported in this by an environmental group, the Wilderness Committee, whose agenda – one founded on widely admired principles – has nothing to do with jobs.

(In case there is still any confusion here, the CCPA's support for the Leap Manifesto tells us pretty much all we need to know about its views on trade.)

We could do worse than learn from New Zealand, which treats log exports as a desirable export commodity much like agriculture.

If we were talking about exports of other primary products that Canada does well in, the anti-export argument presumably would be that every potato exported "raw" means fewer domestic-made McCain's french fries; or that every tonne of metallurgical coal sent to China is a blow to the Canadian steel industry. In that sense, CCPA's position represents the view of the anti-globalization movement. But it also ties in to deeper cultural views of how the BC forest economy should operate, as evidenced in a 2015 analysis by columnist Stephen Hume that argues (contrary to the evidence) that log exports can be equated to mill closures.

Even though logs are just a fraction of the value of overall forest exports, over 20 years they have brought BC $9.2 billion in sales, according to federal trade data. The recent rise in log exports occurs at a time of increasing, not decreasing, forestry employment.

This provides a clue as to why log exports are broadly supported by industry and local leaders in forest communities. Last year, the Truck Loggers Association (TLA) found 62 per cent of community leaders surveyed are supportive. This may be because they are aware that exporting logs allows local mills to get their logs more cheaply. It's also clear that log exports are helping BC to develop non-USA markets, not a bad thing considering the uncertainty that lies ahead.

This is not to say everything is perfect in the woods. It is clear there is a lot of dissatisfaction driven by highly technical resource management issues. Recently I heard from a lumber manufacturer who had to vent his frustration with the way log export restrictions are managed: "Bad politics, bad policy, kingdom building, political suicides and births have all contributed to the most awful and unfair forest tenure system, subject to political adjustments every few years when someone needs to get elected," wrote my correspondent. He recommended a major reform of licensing that would resolve the frustrations some in the industry complain of. On the labour side, the Steelworkers do not agree with the CCPA: they are not calling for a ban on log exports. However, as a news release this week indicated, the union does associate the practice with local job losses.

Any future government will have work to do on this file, starting with allowing more industry players to have their voices heard.

For now, there is a real risk that continuing misinterpretation of log exports will cost British Columbia forest workers their jobs.

Coastal communities, many of them already facing population decline, can expect hard times should future governments adopt anti-trade policies aimed at logs. Unfortunately, the phrase "raw log exports" has a raw emotive appeal especially among those most vulnerable to downturns in the forest economy. It particularly resonates on Vancouver Island where many ballots will be decided on what candidates have to say about the issue. Unfortunately, the temptation to pander to voters on log exports may prove overwhelming for some.

Stewart Muir is executive director of the Resource Works Society. A past business and finance editor of The Vancouver Sun, he was responsible for coverage of the BC forest industry.

Data used for the charts in this post can be viewed here.