MYTH BUSTERS: Why building the bridge to our energy future is not as easy as it might appear

In part 2 of the Myth Busters series, we look at some of the challenges facing those committed to cleaner ways to power society

The following chart tells a powerful story about the future of energy in British Columbia: 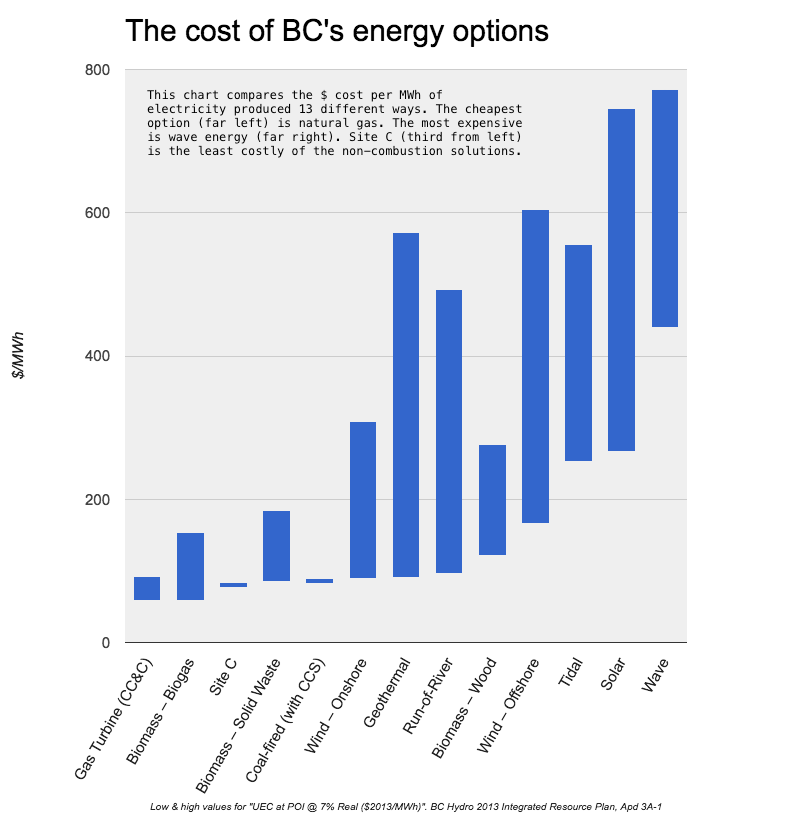 Produced from BC Hydro data (see this report, page 193), the chart shows that the three cheapest options are gas, large-scale hydro and coal.

Yet some ask: what if we could stop using fossil fuels overnight and get all our energy instead from electricity.

After all, we frequently hear, electricity is limitless, environmentally friendly and totally reliable.

Though many of us believe that such a transformation should be possible, real world experience is proving that getting there is incredibly challenging. One looming fact is that, simply, electricity is not inherently green or limitless. Its green footprint depends entirely on how it is made.

Why is this an issue right now?

To take one example, in British Columbia the City of Vancouver is attempting to pioneer the total elimination of natural gas from its energy supply.

At first appearance, this seems like a virtuous direction – why not eliminate a hydrocarbon that releases CO2 when combusted?

On closer examination, it turns out that such a move raises more questions than answers. Critics have pointed out downsides such as increased costs, loss of consumer convenience and choice, and unrealistic expectations that renewable natural gas will ever exist in enough volume to replace natural gas.

As a result, residents are confused. And their uncertainty is justified.

The fact is that in future, our total energy consumption will still have to come from somewhere. Efficient new buildings might require less energy than drafty century-old houses, but residents will still be looking for reliable and affordable heating. The pluses of natural gas for cooking are tough to discount.

Dropping localized natural gas use in favour of electric heating will require the development of new sources of reliable energy. Though solutions like solar and wind are often described as "renewable", they don't qualify as "reliable" since the amount and stability of their electricity production fluctuates widely. Large-scale battery storage may solve this problem in future, but for the moment wind and solar tend to produce too much electricity when it is least needed, and not enough when it is most in demand.

Parts of the world that are adding lots of wind and solar generation are also, somewhat ironically, also adding stable sources like natural gas and coal plants to ensure that the electrons don't stop flowing just because the the wind is not blowing and the sun is not shining.

Today, reliable electricity on a mass scale still must come from sources like hydro dams, nuclear reactors, and plants that burn coal, natural gas or oil. Even as the costs of new energy choices like solar panels are dropping, they remain relatively high. Over time, investments in geothermal are a real possibility, yet as the chart indicates such a choice involves committing to a highly variable cost range.

All in all, our era of energy transition will change the way humans impact their environment. But when all factors are considered, it's clear that getting to our goals will take collaboration and patience.

FURTHER READING: The Expanding Role of Renewables in the Global Electricity Market