The province of British Columbia’s Old Growth Strategic Review tackles head-on an issue that has bedevilled the government for decades: ensuring that the seemingly polarizing values of forest protection and public prosperity can somehow be harmonized. Stewart Muir looks at the issue. 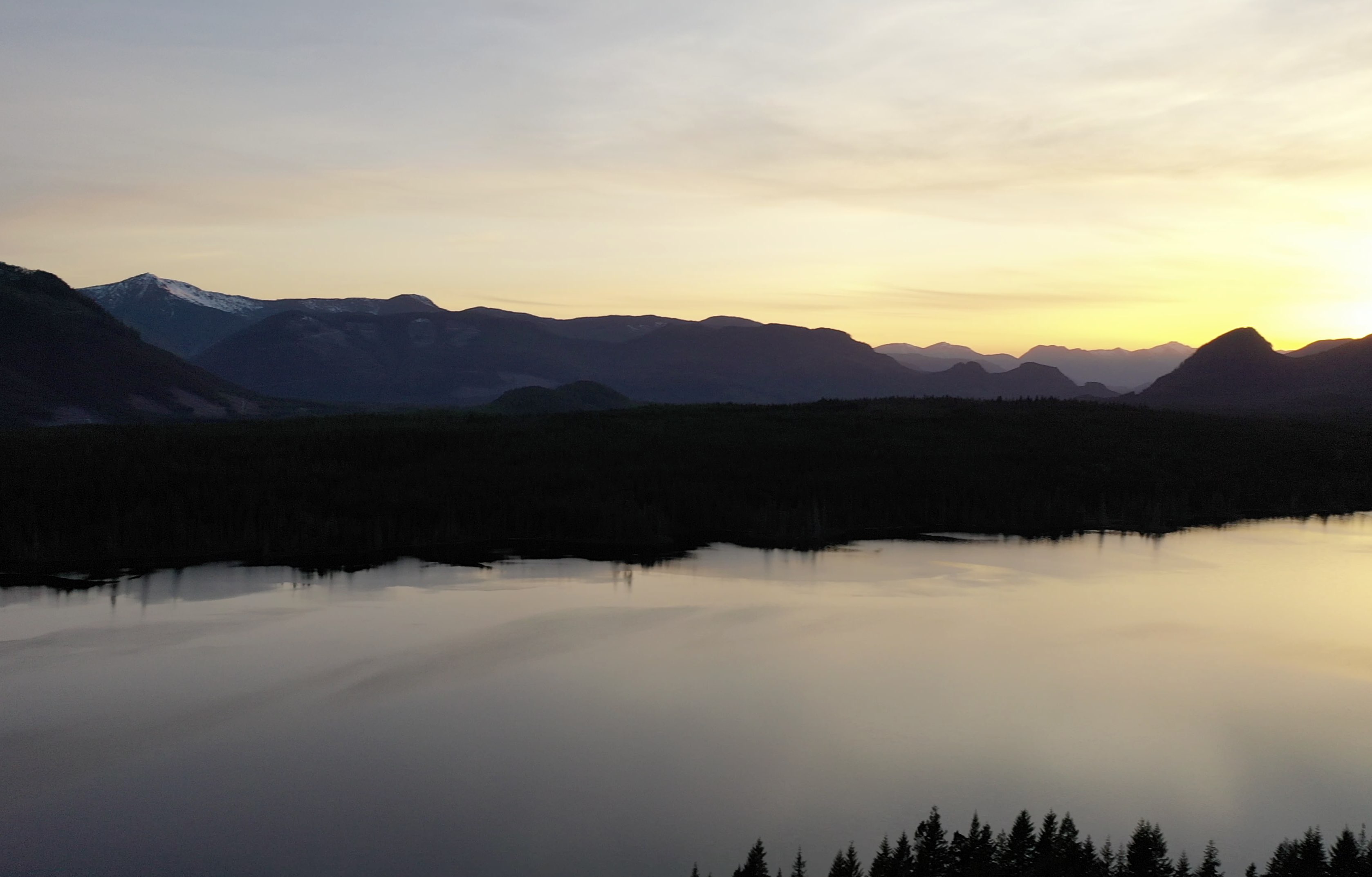 The review was struck one year ago reporting to the forests ministry, with a mandate to "hear perspectives on the ecological, economic and cultural importance of old growth trees and forests.” Public feedback received would be considered, "within the new approach to old growth management for British Columbia."

Some in the eco lobby seem to think that the promised report will be released imminently and once again rhetoric about the evils of old growth logging is flooding social media. An Extinction Rebellion hunger striker claims he won’t eat again until logging is banned and the Sierra Club has ramped up its perma-campaign against old growth forestry to put pressure on Premier John Horgan.

Look closer, however, and the review’s assignment is encouragingly practical in its phrasing. It commits to “reinvigorate our forest sector to improve both environmental standards and jobs for local communities.” This is language of progress and collaboration.

The warriors against old growth logging stand on a high pile of moral dudgeon. It’s emotionally powerful stuff, but what’s obvious is that their own kryptonite lies in the refusal to talk about how far the industry has come since the sweeping reforms of the 1990s when images of clearcuts earned international criticism. We are in a different era today, and carrying on with stunts and demarketing actions that hurt those least able to defend themselves shows only that the rest of the world has moved on. As polling commissioned by Resource Works has shown, more than four out of five B.C. residents really believe it's possible to have a green natural resource industry. Government and industry seldom receive the credit they deserve for evolving with changing times, and that’s wrong.

You'd never know it from the "stop old growth" mantra that relies on caricatures of evil corporations to foment outrage, but only 30 percent of the coastal forest is actually available for harvest as defined by the Timber Harvesting Landbase (THLB). The other 70 percent is not available for harvest due to legislative restrictions, and physical and economic constraints.

Forest minister Doug Donaldson shared information with the Legislature on July 31 that provides proper context for understanding the issue:

(The full statement is recorded in Hansard, starting in this link at section 7. Also see this report from Tom Fletcher of Black Press.)

These are the plain facts as committed to the official record by the minister responsible. Radically different statements are routinely used to rouse opposition to forestry but rarely does the information check out. The fact is that forestry is a truly renewable and regenerative activity: healthy trees grow, sequester carbon and add volume every year. Thanks to this characteristic, when BC’s forests are managed for success, they are similar to a retirement savings plan that produces income to live off, without eating away at the next generation’s legacy. This is actually the situation we are in today, notwithstanding the high-pitched pressure groups.

The forest industry can be looked at in terms of the large economic benefits that come from sustainably harvesting trees. The Council of Forest Industries counted 140,000 direct and indirect jobs B.C.-wide in a 2019 study. Vancouver Island is a bright spot: as anyone who consults the BC Stats website can see, in that employment region, that forestry and logging jobs grew by 42 per cent in the decade to 2019, compared to a 3 per cent decline in tourism-heavy accommodation and food services. Very few industries are growing in rural BC today and the ones we have must be embraced.

Forestry is the pillar of the local economy in many communities and it’s clear, in the midst of this pandemic, how fortunate they are to have an industry that was deemed essential and has been able to operate virtually unscathed.

It’s also true that forest scientists and professionals are keenly aware of the long-term impact of climate change on the flora and fauna that comprise the forests that we currently know.

It’s evident that pressure groups have made no effort to understand radical improvements to forest practices in recent times: their messaging is set in place and no amount of reasoning or new information will affect it.

Two decades of robust science–based forest management have spawned conservation strategies that not only consider what the forest looks like today but also what its future state will be 50 years, or even 200 years, from the present.

Climate change means that the predicted trend of warmer and dryer conditions will shift ecosystems and the habitat of some tree species out of some areas and into new areas. While forest fauna might be able to fly or walk as an adaptation strategy, flora like old growth trees enjoy no such advantage. As the forest around them changes, they are subject to a slow decline as growing conditions become less suitable for their genome.

A romantic view might be that the woods are best left as they are. Yet that state is one of change. A scientific approach means future-proofing forests so they have the right mix of trees adapted to the future climate, while recognizing Indigenous and preservation values, wildlife habitat, intergenerational sustainability, and economic use.

Get this balance right, and we'll have healthy, resilient forests that keep carbon out of the atmosphere and support wildlife and culturally important old trees valued by First Nations and naturalists, while also providing livelihoods and recreational access. There is always room for improvement, and we have solid evidence that this has already been happening and is working.

Even in coastal BC's 70 percent of forest that is not within the THLB, we should be thinking about strategies to ensure the long-term health of ecosystems, rather than regard them as if they are like those old-school museum dioramas where nothing ever changes except they get a little more faded every year.

Moratorium would do more harm than good

Unfortunately, some pressure groups are looking to renege on the spirit of past hard-won agreements on what land may or may not be logged. Their idea of “protecting" old forests compares to how a Munchausen syndrome by proxy parent "protects" their child. Which is to say, they are likely to do more harm than good if in a half century or so it is realized that had forest management science been more thoughtfully applied in 2020, entire ecosystems would be better adapted to inevitable change.

It’s reminiscent of the anti-vaxxing movement when, rather than join a calm and rational discussion, old growth campaigners reveal the weakness of their ideas by relying instead on a torrent of heated social media mob tactics. We can and must do better.

Like anti-vaxxers, old growth fundamentalism relies on confusing cherry-picked statistics and appeals to emotion, and its adherents aren’t interested in talking about the science. These two mindsets may have more in common than is obvious at first. What an interesting coincidence it is that anti-vaxxer Robert F. Kennedy Jr. has also been drawn into the fight against science-based forestry in British Columbia.

Fortunately for British Columbians, the two experts who led the Old Growth Strategic Review are well respected across a broad spectrum of foresters and conservationists. Minister Donaldson stated firmly that a moratorium is not on the agenda: “I have never used, and we've never used as a government, the word ‘moratorium’,” he stated in the Legislature before affirming that before any actions are taken with the review’s recommendations, “we've committed to a full engagement with those groups that have an interest in the forests, such as industry, such as labour, such as communities and such as environmental organizations.”

Magnificent old trees do matter. You'd never know it from the anti-logging campaigns, but industry continues to practice what environmentalists preach, with hundreds of wide-girthed trees spared the lumberjack's blade in recent years and many more to be set aside in future. Green growth and applying science to climate change mitigation and adaptation are values that British Columbians strongly support, yet strangely in the case of the old growth campaigns they are being asked to look for them in the wrong places.

Whatever the Old Growth Strategy recommendations may be, it seems certain they will be based on science and reflect the need to ensure harmonized values are recognized. Implementation won't be an easy job but hundreds of thousands of British Columbians and scores of local communities are relying on government to find a path that preserves this balance.

A vivid example of the reality gap on old growth understanding was provided in the second week of August 2020 when a delegation from a Victoria pressure group set out for the woods to make a point. Here they are: 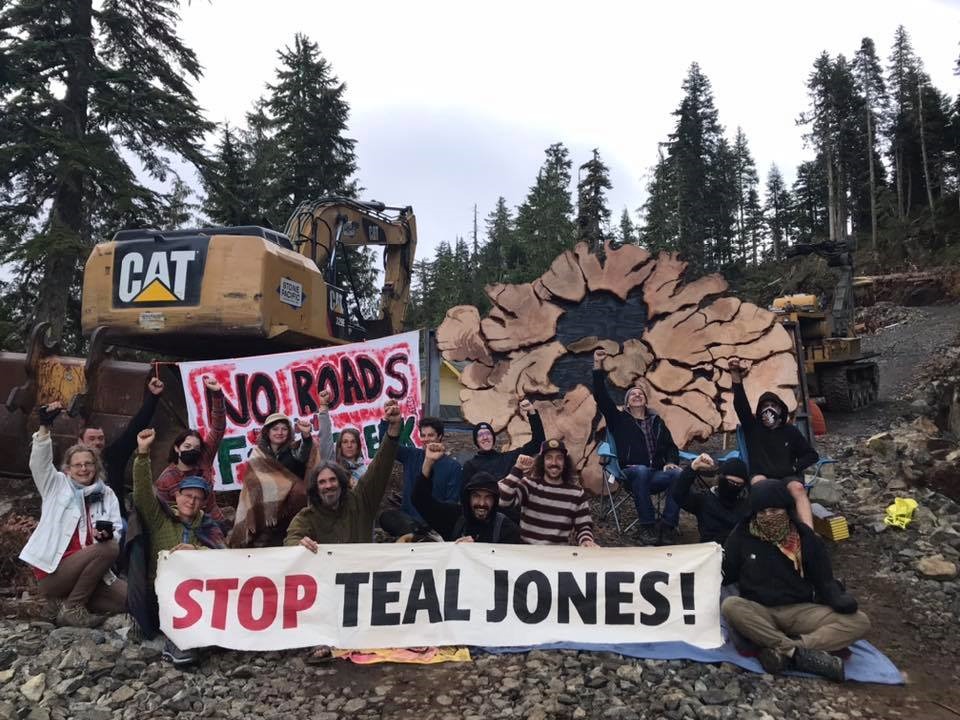 The image shows delegation members in a wooded, hilly location with heavy machinery – just the locale one would expect to find some old growth. And look, there's the proof of their concerns – a massive tree that clearly has been cut down and is waiting on the hillside for whatever comes next.

Wait, what's this? A photo from behind that scene reveals that the felled tree is not actually a tree at all, but rather a stage prop made out of plywood: 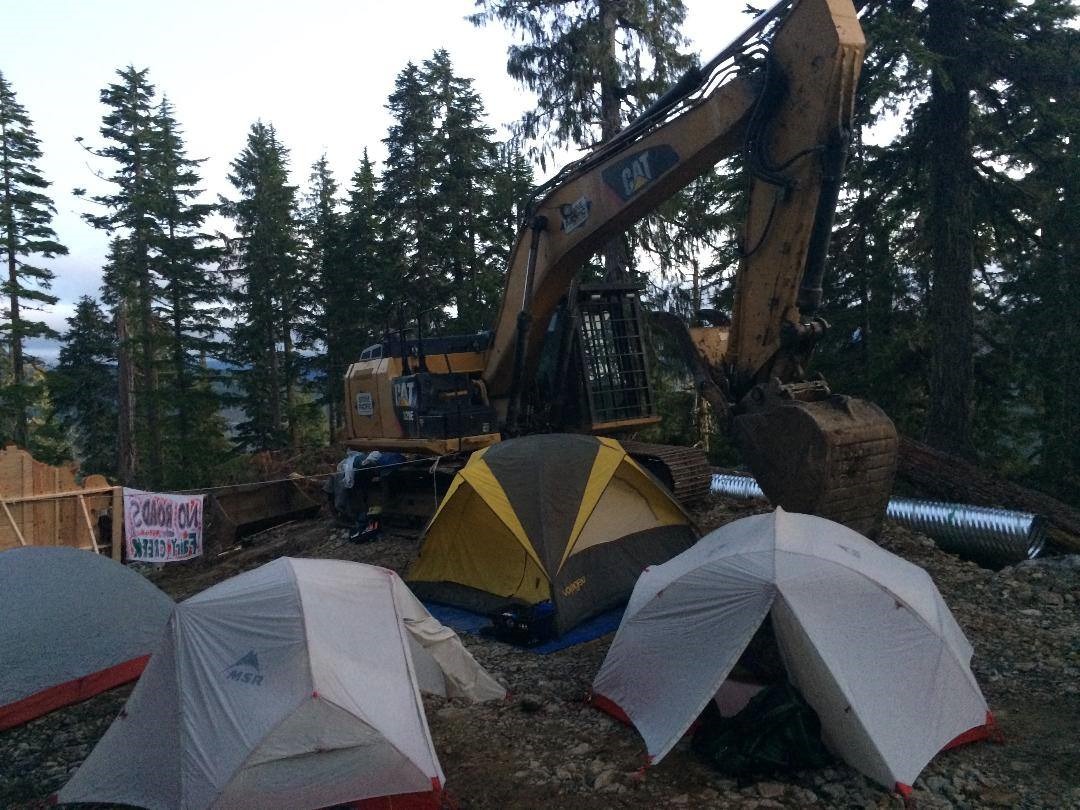 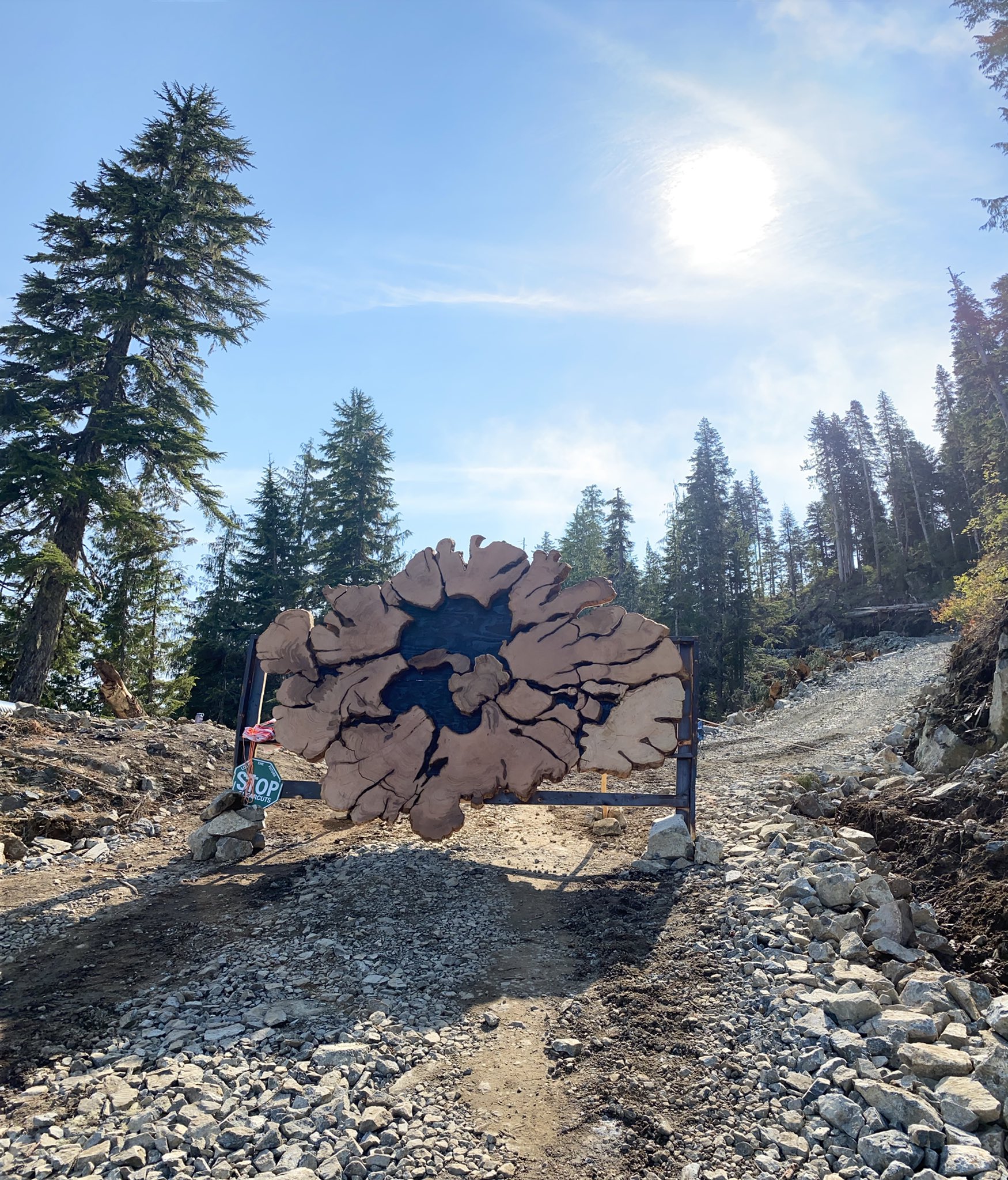 Fortunately the same visitors were able to also capture images of what actual logging looks like in the area they are protesting. It's hard to grasp the exact scale of the logged tree stumps in the following photo, but clearly they are minuscule compared to the fanciful mega-tree artificially placed in a natural setting for the purposes of a social media/fundraising campaign: 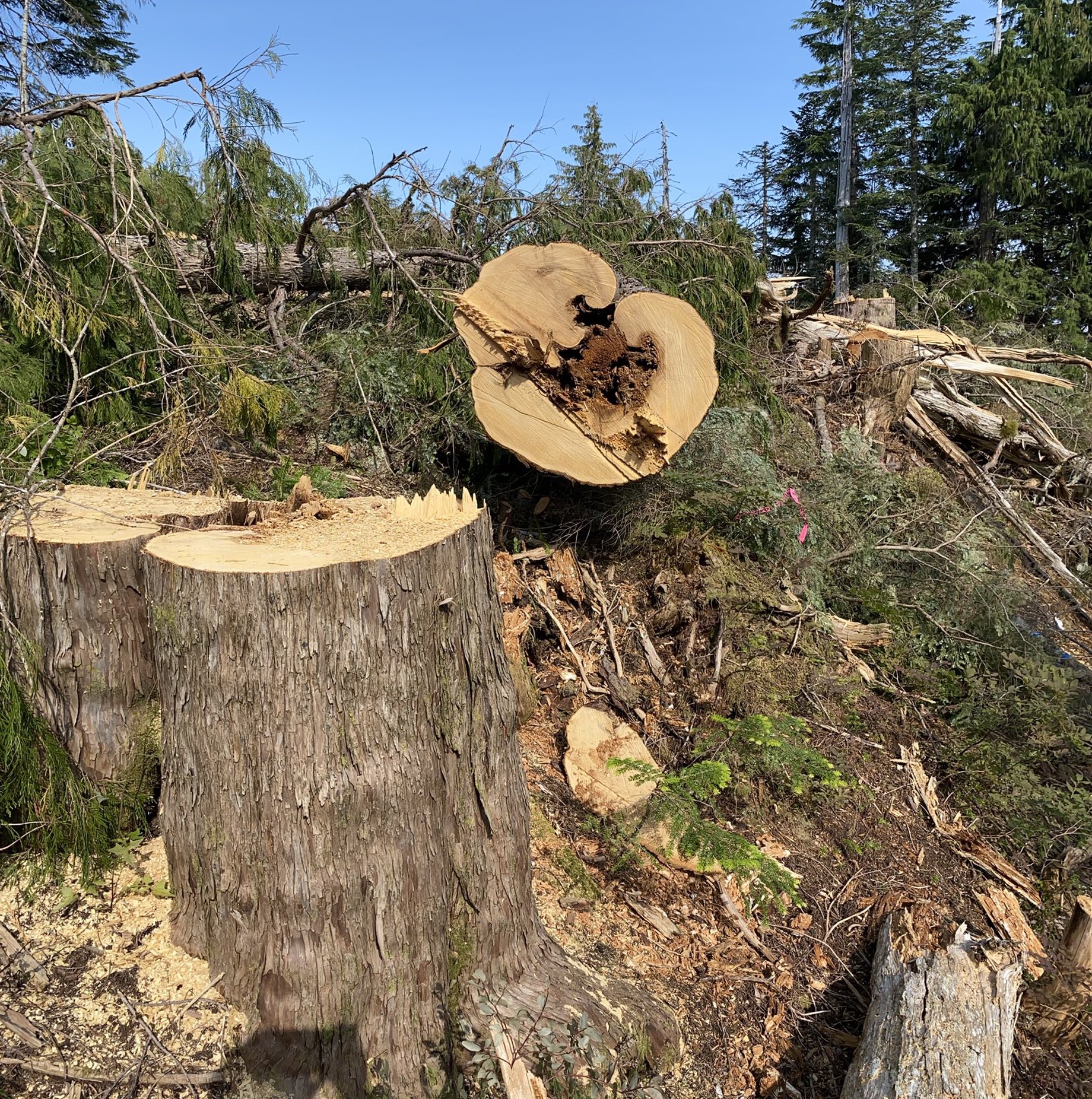 Truth in advertising would and should be expected of any government or corporate communications about a sensitive topic like old growth. These images say a lot about how the lines of been blurred in recent years between fact and fiction. The mocked-up tree represents everything that the old growth debate has become.